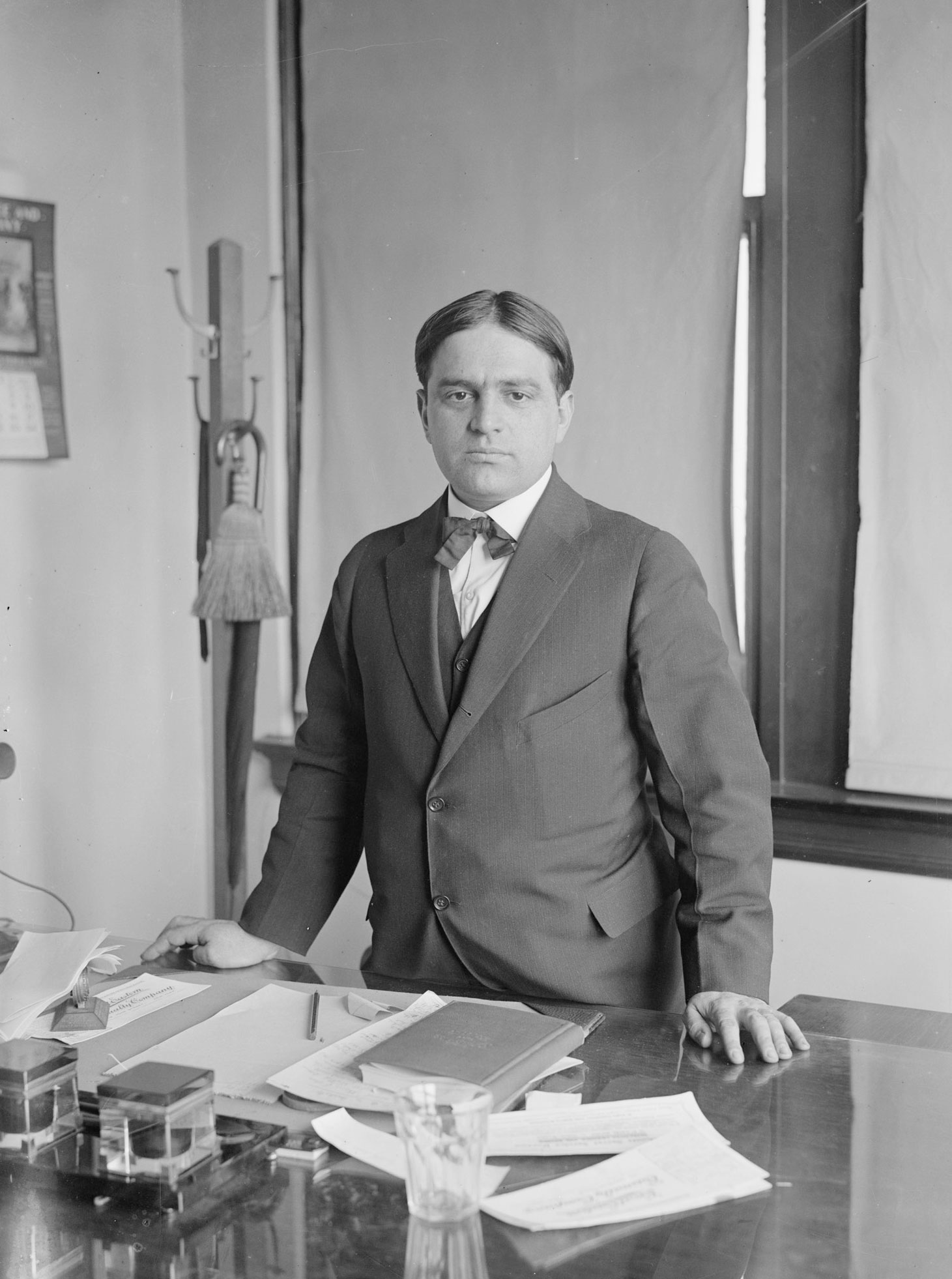 Fiorello LaGuardia, shown here in his office on Ellis Island. He worked there from 1907 to 1910, following his Foreign Service career, as a language interpreter for Italian, German, Yiddish and Croatian immigrants.
Library of Congress / Bain Collection

Sauntering down the main street of Rijeka, Croatia—the Corso—the tourist comes across a building sporting a plaque in two languages, Croatian and English. The English version reads: Fiorello LaGuardia, Member of Congress and Mayor of New York City, worked and lived in this building from 1904 to 1906 in the capacity of Consular Agent of the United States to Rijeka.

Yes, before serving in Congress and as a three-time mayor of New York, the colorful LaGuardia spent nearly five years in the U.S. Foreign Service. He was consular clerk and assistant to the U.S. consul general in Budapest from 1900 to 1903, then the consular agent in Fiume (now Rijeka) from 1903 to 1906. Both cities were then part of the Austro-Hungarian Empire.

Fiorello LaGuardia was born in New York City on Dec. 11, 1882. His father, Achille LaGuardia, an Italian musician and composer, hailed from southern Italy while his mother, Irene Luzzato Coen, was the descendant of a prominent Jewish-Italian family based in Trieste. Fiorello was named for his maternal grandmother, Fiorina Luzzato Coen.

The LaGuardias immigrated to the United States in 1880. Five years later, Achille enlisted in the U.S. Army as a band conductor, serving in the Dakota Territory; Watertown, New York; and at two frontier forts in Arizona. In 1898, at the beginning of the Spanish-American War, he was transferred to Tampa, Florida, where he became seriously ill and was discharged from the Army. He then took his family back to Trieste, where he managed a hotel before dying in 1904.

At loose ends in Trieste, the 18-year-old Fiorello did not want to work in his father’s hotel. An acquaintance of his father, Raymond Willey, who was the U.S. consular agent in Fiume, told him about a clerical opening at the U.S. consulate general in Budapest and gave him a recommendation. Fiorello travelled there for an interview and was hired. The job did not pay much, but it afforded young Fiorello a modicum of freedom, and was an interesting learning experience.

Frank Dyer Chester, the consul (later consul general) there, was an honor graduate of Harvard University (Class of 1891), an Arabist and classical scholar. But he may have owed his appointment to being a member of a distinguished Boston Brahmin family that socialized with the powerful Senator Henry Cabot Lodge (R-Mass.). Even so, Chester was a thoroughly competent diplomat. Most of his reporting covered commercial matters, trade opportunities and public health issues, but included the occasional political item.

The younger Fiorello must have impressed Chester, since he referred to him in reports as his “amanuensis,” a word whose meaning the young clerk had to look up in a dictionary. Since the office had no typewriters, it was Fiorello’s task to interpret and draft his boss’s notes for reports. His work also included collecting and organizing statistics, accepting applications for visas and for U.S. passports, keeping track of consular fees and rendering assistance to Americans passing through Budapest. The most high-profile visitors he met were dancers Isadora Duncan and Loie Fuller, both famous across Europe.

Chester, who was a bachelor, warned Fiorello about the peril of personal involvement with glamorous women and the potential of blackmail, but the impetuous young man was not deterred. Once he took a blonde beauty against whom Chester had specifically warned him to the theater. Chester, who was attending the same performance, saw LaGuardia and fired him on the spot. However, the order was soon rescinded through the good offices of Vice Consul Louis Gerster.

Chester advised Fiorello that one way he could render himself useful in the Foreign Service, despite his lack of proper academic credentials, was to learn languages. He even sent him to Croatia for four months to learn Croatian. By the time he returned to the United States in late 1906, LaGuardia spoke fluent Yiddish and Italian, and had also learned German, French, Croatian and Hungarian. This linguistic ability allowed him to pass a Civil Service exam and become an interpreter at Ellis Island, while concomitantly attending law school in New York.

Moving on to Fiume

In the fall of 1903, when Raymond Willey, who had helped LaGuardia secure the clerkship in Budapest, resigned to return to private business in the United States, he recommended Fiorello to replace him as consular agent in Fiume. Frank Chester secured approval from Washington; however, because LaGuardia was still a minor, he could not be commissioned until he turned 21. In the interim, he served as acting consular agent until February 1904, when he received a commission from Secretary of State John Hay.

Fiume was then a thriving city of about 30,000 and the second-largest port, after Trieste, in the Austro-Hungarian Empire. Because Croatia was administratively part of the Hungarian portion of the dual monarchy, the incumbent in Fiume reported to the consul general in Budapest—in this case Chester, Fiorello’s old boss.

The consular agent’s office-cum-residence consisted of two rooms, one of which was used as an office and the other as a private bedroom. The small apartment had no kitchen or bathroom; the incumbent had to use a communal bathroom down the corridor and take his cooked meals in restaurants and tavernas. The apartment, however, was conveniently located on the Corso, the city’s main street.

One official reportedly labeled LaGuardia “the worst headache in the history of the [State] Department.”

LaGuardia received a guaranteed salary of $800 a year, more than $20,000 in today’s dollars. This was paid out of the consular fees he collected for various services; but if the collections exceeded $1,000, the balance had to be turned over to the Treasury Department. LaGuardia assured Washington that he could manage well on his salary.

A few months after his arrival, in June 1904, LaGuardia assisted an American citizen from Scranton, Pennsylvania. While in Croatia to visit his parents, the immigrant had been conscripted into the Austro-Hungarian Army. LaGuardia drafted a note of protest to the highest local official, called on him, and made a demarche on behalf of the unlucky citizen. Basing his arguments on the clauses of the 1870 treaty then in force between the United States and Austria-Hungary, LaGuardia eventually secured the young man’s discharge from the Austro-Hungarian Army.

Making his report on the affair to Budapest, he expected to be commended. Instead, Fiorello received a strongly worded reprimand for having acted without consulting his superiors and securing prior guidance and approval.

In his free time in Fiume, LaGuardia studied the local political situation. In an effort to keep their multiethnic subjects cowed, he observed, the authorities practiced a policy of “divide and rule,” encouraging ethnic, racial, national and religious discord.

Once he was even challenged to a duel after a brawl with a Hungarian Army reserve officer over a girl. Fortunately, on the day of the duel, the affair was resolved.

One of LaGuardia’s major tasks in Fiume was dealing with ships and immigrants bound for the United States. The British Cunard Lines had just instituted a bimonthly service from Fiume to New York, catering to prospective immigrants from the Balkans and Eastern Europe. The only guidance he could find in the meager references he had in the office was that he had to “certify to the health of all passengers and crews and give the ship a certificate that it had cleared from a port free from contagious diseases or illnesses subject to quarantine regulations and that bedding and other household goods had been properly fumigated.” If generally satisfied that these conditions had been met, he was then obligated to issue a consular certificate to that effect.

LaGuardia believed that performing a medical examination of each prospective immigrant before they arrived at Ellis Island would better fulfill the purpose of the quarantine regulations, while also saving money and effort for both the United States and the prospective immigrants, who could otherwise be found inadmissible on arrival in the United States. After obtaining authorization from the consul general in Budapest, LaGuardia selected a reputable local doctor to conduct such examinations at embarkation.

When he advised Cunard Lines of the new procedures he was instituting, its officials were incensed and would not let the doctor “look at an emigrant.” However, when LaGuardia then declined to issue the sanitation certificate, they were obliged to comply, at least in part. Cunard paid the $5 fee for the certificate but refused to pay the doctor’s fee, and filed a protest with the British consul. That protest eventually found its way to Washington, but the department never ruled on whether LaGuardia’s actions were proper or he had exceeded his authority.

Some time later, Cunard Lines also agreed to pay the doctor’s fees, including the arrears, to induce LaGuardia to issue the required consular certificates. For its part, the United States eventually adopted the system Fiorello had initiated, of medical examination of immigrants prior to embarkation, worldwide—though not for several more decades.

LaGuardia’s stand on the processing of immigrants also got him into trouble with local officials. Once, while Archduchess Maria Josepha (the sister-in-law of Archduke Franz Ferdinand, who was assassinated at Sarajevo in 1914) was visiting Fiume, the city’s governor arranged for her to view an immigrant embarkation procedure staged entirely for her benefit. To protest the sham, LaGuardia refused to participate or even meet her for tea aboard ship. The British consul, who did take tea with the archduchess and the governor, warned him that the authorities would not take such an affront lightly.

There is no record that Austria-Hungary lodged a formal diplomatic complaint against the young whippersnapper, but his behavior must have troubled many back in Washington. One official reportedly labeled LaGuardia “the worst headache in the history of the [State] Department.”

That comment suggests the real reason for the brevity of LaGuardia’s diplomatic career: he simply did not fit into the pre-Rogers Act Foreign Service. He had only a high school education, a fact not conducive to promotion in an institution dominated by Ivy League graduates. Nor did his Italian-Jewish background, his short and pudgy physique, and rumpled attire match the WASPish, tall and impeccably dressed traditional figure of a U.S. diplomat.

In addition, LaGuardia’s restless intelligence; his brash, argumentative and stubborn character; his disregard for rules he considered silly; his compassion for the uprooted and the dispossessed; and his inclination to contrariness and wavemaking did not win him many friends among his colleagues.

Whatever the reason, Fiorello LaGuardia resigned from the Service in 1906. Back in New York, he was soon on his way to a bright future in the political arena—and the history books.

Luciano Mangiafico, an FSO from 1970 to 1991, is the author of two books, Contemporary American Immigrants (Praeger, 1988) and Italy’s Most Wanted (Potomac Books, 2007). He has also contributed articles to The Foreign Service Journal and the literary journal Open Letters Monthly, among other periodicals.