The Foreign Service Journal covers foreign affairs from an insider’s perspective, providing thought-provoking articles on international issues, the practice of diplomacy, and the U.S. Foreign Service. Including the AFSA News section, The Journal is published monthly (January-February and July-August issues combined) by the American Foreign Service Association.

The January/February issue focuses on AFSA as a Union at 50.

To keep up with The Foreign Service Journal online, sign up for our weekly email bulletin featuring magazine content and other items of FS interest. 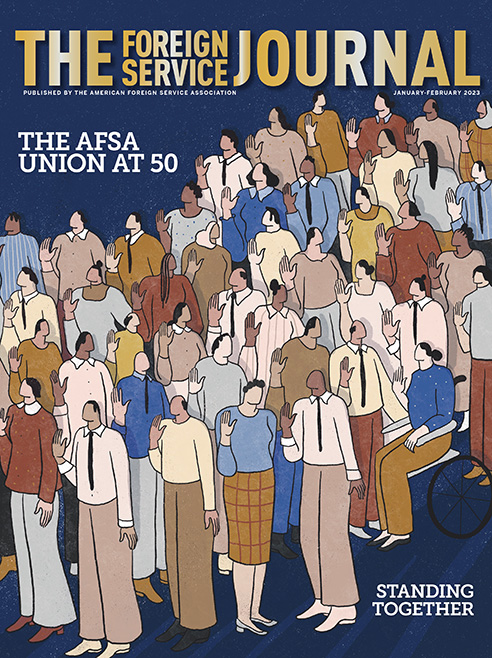 FOCUS ON AFSA AS A UNION AT 50

Once a polite diplomats’ society, AFSA is now a financially and politically strong union and a player on the wider stage—with the administration, Congress, and the American public.

AFSA Becomes a Union: Why It Matters

In becoming a union, AFSA gained new powers to influence the personnel system and safeguard the interests of career diplomats.

Federal Unions and USAID: The Challenge for AFSA

A second-generation USAID FSO and AFSA vice president explains why the USAID Foreign Service needs a union and lays out workforce challenges facing the agency today.

From the FSJ Archive: The FSJ on AFSA’s Path to Unionization

When Terror Strikes Home: Covering Our Children While Protecting All Americans

Foreign Service crisis management can involve your own family. A career FSO and ambassador recalls his harrowing experience in Cambodia, and the lessons learned.

You Are AFSA: AFSA Needs You

The AFSA Union at 50

Focusing on Our Specialist Members