The life and work of Herbert Allen Giles offer insights for many Foreign Service members—particularly those who embark on the kind of linguistic journey Giles undertook as a young diplomat. 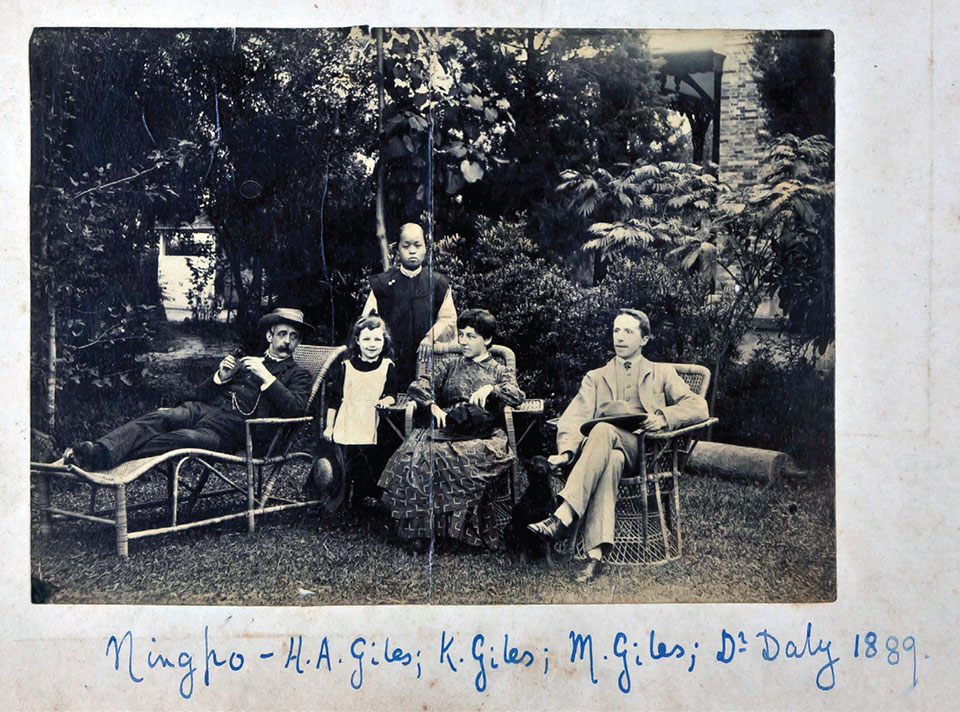 Courtesy of the Australian National University

Herbert Allen Giles (1845-1935), perhaps best known for his association with the Wade-Giles transliteration system, was a British Foreign Service officer who spent 25 years in China. After retiring from diplomacy, he became the second professor of Chinese at Cambridge University.

Giles initially took Chinese as a job requirement. But after mastering the language for that purpose, he pioneered the discipline of Chinese studies and was a prolific author of numerous textbooks and articles on China’s language, literature, culture, history, arts and philosophy.

It would be unfair to compare Giles with today’s U.S. Foreign Service officers, since he spent his entire diplomatic career in China and Taiwan. Nevertheless, his story proves that it is not only possible for an adult to learn Chinese, but to be remarkably successful.

With that in mind, here are some possible lessons for FSOs preparing for language-designated positions.

After completing his studies at the Charter School in Oxford, Giles passed the competitive examination to be a student interpreter for the British Foreign Service. Immediately after arriving in China in 1867 as a 22-year-old, he distinguished himself by his untraditional approach to learning the language.

There were very few textbooks available for Westerners to learn Chinese at that time. Giles was not entirely satisfied with the recommended textbook, Yu Yan Zi Er Ji, considering it as an “ill-arranged and pedantic primer”—an assessment that would become a major point of contention between Giles and its author, Sir Thomas Wade. So he set out to learn what the Chinese were reading and how their children attained literacy.

He set out to learn what the Chinese were reading and how their children attained literacy.

Giles purchased books on the street, and started by memorizing a classic primer, The Three Character Classic. He then taught himself to read Chinese literature by using dictionaries and consulting French translations, since he was already fluent in that language. He was so ardent in his pursuit of learning that he sometimes stopped strangers on the street to find out what they were reading.

In addition to reading business correspondence on the job, Giles was also steeped in contemporary and classic Chinese literature, history and philosophy, going far beyond the required textbooks.

Giles’ diplomatic career carried him to many places in China: Tientsin (now known as Tianjin), Hankow (Hankou), Canton (Guangzhou), Swatow (Shantou), Pagoda Island (Xiamen), Tamsui (Danshui, Taiwan), Shanghai and Ningpo (Ningbo). In each of these posts, Giles studied the local dialects; he even wrote a language book on the Swatow dialect.

There are two kinds of motivations for learning a foreign language: instrumental (utilitarian) and integrative. The first category encompasses those who learn another tongue to fulfill a job requirement or get good grades, while the second group consists of those who are truly interested in the target culture and people. Integrative motivation is generally the stronger of the two forms, and its practitioners are generally more successful in learning the target language.

Although Giles started learning Chinese due to instrumental motivation, he soon transitioned to integrative motivation because he became genuinely interested in the Chinese people. Giles often ventured into the local Chinese community rather than stay within the comfort zone of the expatriate quarter. In the preface to his Chinese Sketches (1876), he noted that “The following sketches owe their existence chiefly to frequent peregrinations in Chinese cities, with pencil and notebook in hand…”

Giles offered an unconventional view of Chinese culture, countering the mainstream belief of his contemporaries. As he wrote: “It seems to be generally believed that the Chinese, as a nation, are an immoral, degraded race … that opium, a more terrible scourge than gin, is now working frightful ravages in their midst; and that only the forcible diffusion of Christianity can save the Empire from speedy and overwhelming ruin. An experience of eight years has taught me that, with all their faults, the Chinese are a hardworking, sober and happy people, occupying an intermediate place between the wealth and culture, the vice and misery of the West.”

Giles’ devotion to China and its culture is evident both in his 1922 anthology of translations of famous Chinese verse, and his own poetic preface to that volume:

Dear Land of Flowers (China), forgive me!—that I took
These snatches from thy glittering wealth of song,
And twisted to the uses of a book
Strains that to alien harps can ne’er belong.
Thy gems shine purer in their native bed
Concealed, beyond the pry of vulgar eyes;
Until, through labyrinths of language led,
The patient student grasps the glowing prize.
Yet many, in their race toward other goals,
May joy to feel, albeit at second-hand,
Some far faint heart-throb of poetic souls
Whose breath makes incense in the Flowery Land.

Learn the Culture As Much As the Language

In addition to learning the Chinese language, Giles became an ardent student of Chinese culture, from his youth in China through his old age in Britain. Once he managed to disguise himself to enter the Temple of Heaven (a complex of religious buildings in southern Beijing dating back to 1420) with the Chinese emperor to view an imperial sacrificial worship. He also went to the market to observe events such as funerals conducted by Buddhist monks, circus performances and tooth-extraction.

After retiring from the British Foreign Service, Giles kept in touch with current affairs by reading Chinese newspapers. He continued to assess and write about events in China actively long after retirement. His 1923 book, Chaos in China, reflected his keen observations and insights into the causes of the society’s tumult.

At the time, Chinese studies was not a popular undertaking, and Sinologists were regarded as outcasts in both the general and academic community.

Giles also collected Chinese coins and traveled widely in China, mainly for business purposes. During his journeys, he sought opportunities to observe every aspect of local culture. Instead of being annoyed when the Chinese stared at him, as many Westerners were, he took the opportunity to study them, staring straight back and attempting to see their hearts and understand them.

Two of Giles’ many publications, the Chinese-English Dictionary and Chinese Biographical Dictionary, won the Prix St. Julien Award from the French Academy. These books were testimonies to his lifelong endeavor of collecting data, writing, editing, and doing multiple revisions.

At the time, Chinese studies was not a popular undertaking, and Sinologists were regarded as outcasts in both the general and academic community. Giles undertook these monumental projects almost singlehandedly, taking a huge risk by financing the publication of these books on his own.

Endurance and Due Recognition

Giles’ involvement with Chinese studies spanned more than half a century. He continued to publish prolifically until he was 80 years old, when he summarized his life’s ambition as follows:

“Throughout my life, from 1867 onwards, I have had two dominating ambitions: to contribute towards a more easy acquisition and a more correct knowledge of the Chinese language, written and spoken; and to arouse a wide and deeper interest in the literature, history, religions, art, philosophy, and manners and customs of the Chinese people.”

In addition to receiving two honorary doctorates, one from the University of Aberdeen and the other from Oxford University, Giles was invited to inaugurate the Chinese lecture series for the establishment of Columbia University’s Chinese program in 1902. (Columbia later offered him a departmental chair, which he declined.) He also received a red umbrella from the Amoy Chinese Chamber of Commerce for his protection of emigrants from overcrowding in steamers.

The strength of Giles’ love affair with China sustained him for a productive life’s work, until the age of 90.

Giles was also a leading member of the North China Royal Asiatic Society, mentoring other Westerners in their studies of Chinese language and culture. One of these was Charles Henry Brewitt-Taylor, a commissioner in the Imperial Maritime Customs Services. Brewitt-Taylor counted Giles, along with Sir Robert Hart, the inspector general of the Imperial Maritime Customs Services in China, as among his few close friends.

It was with Giles’ encouragement that Brewitt-Taylor twice painstakingly translated a classic Chinese novel, Romance of the Three Kingdoms. (The first manuscript was lost in a fire during the Boxer Rebellion.) His rendering remains a classic translation to this day.

Giles’ work in Chinese was so well regarded that Sun Yatsen, the founder of the Republic of China, wrote him to express appreciation for his contributions to the understanding of Chinese language and culture in the West.

Giles’ family was closely linked to China; when his first wife died, she was buried there. His second son, Lionel Giles, a notable Sinologist in his own right, translated The Art of War and was the keeper of Oriental printed materials and books at the British Museum. There he cataloged the famous Dunghuang Scroll, brought to Britain by Sir Ariel Stein. Two other sons, Bertram and Lancelot, served as diplomats in China in the early 1900s; Lancelot witnessed the Boxer Rebellion and the siege of the foreign legations in Peking. All three assisted Giles with his publications.

The fourth son, Valentine Giles, served as a colonel in the British Royal Engineers and participated in Francis Younghusband’s 1904 Tibetan expedition. Giles’ grandson, Austin Giles, worked in the Shanghai Hong Kong Bank in Manchuria and was also stationed with the British military in Chongqing in the 1930s.

Giles shared Chinese studies with his grandchildren, as well, by introducing them to stories and poems in traditional Chinese culture.

The strength of Giles’ love affair with China sustained him for a productive life’s work, until the age of 90. A century ago, Giles prophetically declared that “the interest in China and in her certainly four thousand years of civilization … will no doubt quicken some day in the future.”

For all these reasons, the life and work of Herbert Allen Giles offer insights for many Foreign Service members—particularly those who embark on the same linguistic journey Giles undertook as a young diplomat.

Phebe Xu Gray is a language and culture instructor in the East Asian and Pacific language department at the Foreign Service Institute. The views expressed in this article are those of the author and do not represent those of FSI or the U.S. Department of State.