We were gone for a decade, living in Asia, the Middle East and Eastern Europe. When you land in Beijing without knowing a word of Chinese, you expect to be overwhelmed. As a woman who doesn’t cover in a Muslim country, you know you’ll get some curious, maybe even hostile, stares.

But when you go “home” again, nothing quite prepares you for the feeling of being a stranger in your own city. My first day back, I watched in confusion as the people in line in front of me at the coffee shop put their phones up to a scanner, one after another. What on earth were they doing? Who knew you could pay for a latte with your phone?

I paid cash. It took a while, because I had to pick through my wallet, searching for proper American coins amongst the kopecks, euros and dinar. I gave the cashier a broad grin, “I just came back from Russia.” She stared back at me blankly, confused by my confusion.

Once fully caffeinated, I needed to purchase a phone and a phone plan. At my last two posts, I was given an option: Do you want this plan? Or no plan at all? Here they won’t sell you a phone plan until you tell them how many gigabytes of data you’ll be using. And will you be streaming Spotify? How about Netflix?

Again, I grinned foolishly and asked the salesperson to explain gigabytes of data to me, telling him I’d been overseas so long that I still remembered unplugging the phone in my old house in order to access dial-up internet.

He looked vaguely interested. Or appalled, maybe. He had those strange plastic hole things embedded in each ear, stretching his earlobes to the size of silver dollars. It made me feel vaguely ill, staring through those holes while he talked.

Everywhere I went, I felt compelled to explain—Rip Van Winkle-style—that I wasn’t really a foreigner, it’s just that I’d been away. A few people nodded sympathetically. “State Department, right?” they’d ask, before moving on. Most people didn’t care at all.

Didn’t anybody realize I’d been off on a decade-long adventure?

Sometimes, walking through the grocery store aisles, I’d get a bit dizzy. Those bright ceiling lights! The shiny floors! The row upon endless row of breakfast cereal! Everything seemed overwhelming, and I was certain the other shoppers were all laughing at my befuddlement.

Other times, though, I realized nobody was noticing me at all. Did I really look the same as all of these other suburban parents wandering the aisles? Didn’t anybody realize I’d been off on a decade-long adventure?

I had to stifle the urge to casually mention this fact to the guy behind the counter slicing the cheese. “We didn’t have this kind of cheese in Jordan,” I wanted to tell him, just to make sure he knew I was different somehow.

Repatriating is a strange beast. You want to fit in; you want to stand out. Sure, it’s great that people here mostly stop for red lights, and nobody drives down the sidewalk. But you miss that sense of wonderment combined with annoyance that you used to feel every time a shepherd crossed the highway with his flock during your morning commute.

I’m sitting at the kitchen table in our temporary apartment, going over the bills with my husband, trying to figure out how to pay for everything associated with this move. How much money will he make here in the States? How will I find a job after 10 years of random embassy employment?

One of the kids wanders by, and sighs deeply. “Will we ever go on an airplane again? Maybe just to the Caribbean? Or to Cuba?” he asks. The whole family, it seems, is waking up to our new reality—the idea of a life lived at home in the United States, the way normal people do it.

It’s hard being normal again, after all those years spent not fitting in. 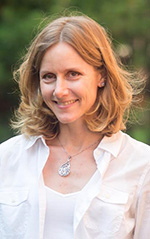 Donna Scaramastra Gorman is a freelance writer whose work has appeared in Newsweek, The Washington Post and the Christian Science Monitor. An FS spouse, she has lived in Amman, Moscow, Yerevan, Almaty and Beijing. Gorman, her Diplomatic Security officer husband and four children recently returned to the Washington, D.C., area.