And Now for Something Completely Different …

Foreign Service transitions can involve more than moving from post to post or evacuating. And there are lessons in that, too.

My relationship with the Foreign Service has been uneven and unusual, consisting of transitions from post to post, as well as transitions in and out and back into the Service. At the least, I suspect, my story is amusing as a quick view of a quirky career path. But it may also hold useful lessons for others. So here goes.

I’ve just started a new role heading up the Dean Rusk International Studies Program at Davidson College in North Carolina. I’m excited about the opportunity to spend more time teaching, mentoring and helping connect young intellectually curious minds with new opportunities. On a personal note, it also brings me within 10 miles of my mother, who has brain cancer. But it is an abrupt shift from my previous work.

Over the past year I was with Veracity Worldwide, a boutique advisory firm that has helped multinational corporations, NGOs, private equity firms and sovereign wealth funds maximize their investment decisions in developing markets for the last 15 years. Veracity’s clients care immensely about two things: first, that their investments conform to environmental, social and governance norms; and second, that their decisions are congruent with U.S. and European Union geopolitical interests.

Both this new role at Davidson and the prior position at Veracity are great fits for a former Foreign Service officer. At the surface level, my participation in the Foreign Service looks like a success. I served for just over 20 years, with relatively fast promotions that culminated in an appointment as Commerce’s deputy assistant secretary for Europe. And then I left in 2019—for greener pastures, right? The real story is a bit bumpier, however, involving family drama, resignations and quick decisions made with uncertain information. In short, real life.

It all started when I joined State’s Foreign Service directly after business school. I turned down corporate offers from the MBA program’s generous sponsors to take what was almost surely the lowest-paying job for anyone in my class. The reason was simple and will resonate with many of my colleagues: I was driven by a sense of mission. I wanted to serve. And I figured that if it wasn’t a good fit, I could leave at any time to return to the private sector.

Just before heading off to Santo Domingo for my visa tour, my life became richer and more complicated. I got married after a two-month whirlwind romance to a fellow college classmate. I was madly in love, and the job seemed much less important than our life together. That sounds basic, but not honoring marriage and family before career success is something that creates enormous challenges for the Foreign Service, with its quasi-military commitment to frequent moves and adverse postings.

Santo Domingo worked well for both of us. My wife worked in the private sector, and we treated it as a honeymoon. But I can’t be the first Foreign Service officer to feel a bit underemployed after doing visa adjudication for two full years. Meanwhile, friends from business school were urging me to quit and come to Silicon Valley. The dot-com boom was in full swing. So my wife and I took a one-week trip to San Francisco. By the end of the week we had, between us, five offers—all of them exciting, challenging and financially remunerative.

Meanwhile, friends from business school were urging me to quit and come to Silicon Valley.

I returned to Santo Domingo and resigned. I was not alone—one of my line colleagues, a stellar professional who had just graduated from law school, headed off to do management consulting. I thought I was done with the Foreign Service.

Silicon Valley in the late 1990s—well, as far as characterizations go, “a modern-day gold rush” may not be far off the mark. My wife’s company went public, making her an instant, if brief, internet millionaire. The ecommerce startup I joined was folded into Walmart.com, and I went on to join one of the dot com’s most infamous boom and bust stories—Webvan, the leading ecommerce grocery venture.

My wife and I were working long hours with incredibly dedicated people. But then our first child came, and we realized that we did not want to both be working such long hours and in such uncertain conditions. In addition, I missed the sense of mission of the Foreign Service. Then 9/11 happened—and I felt a new determination to return to public service.

So I reapplied to State and also to the Department of Commerce’s small but elite Foreign Commercial Service. Foreign Service insiders may get a kick out of the fact that I found myself being called off two registers, to join as an economic and also as a public diplomacy officer—but had just months earlier accepted the Commerce offer and was already in place in Brasilia, with a focus on complex trade and investment dispute issues for U.S. companies.

By this time, several things had begun to dawn on me. The first was that I had needed the short stint in Silicon Valley to convince myself that the MBA education was not in vain, and that money wasn’t the most important factor for job satisfaction. The second was that job happiness may depend less on location and more on your boss and your colleagues. The Foreign Service continues to be challenged with poor management. In Brasilia, however, I had an outstanding direct supervisor who cared immensely about doing the right thing by U.S. commercial interests and demanded much from his staff. At the same time, he was caring and empathetic about balancing hard work with family needs.

The third is that even with that extraordinary boss, I wasn’t doing a good enough job being truly present for my growing family. My wife, now with two small children, was underemployed and felt neglected. Even when I was at home, I was still consumed with work. I sensed that something was off. And it came to a head during my next posting, in Monterrey. When my wife told me that we needed to return to the D.C. area because her father was in poor health, I tried to get the balance right by asking for a compassionate curtailment. It was promptly denied. It didn’t meet the needs of the Service.

What does one do when family needs conflict with the needs of the Service? There is rarely a perfect solution. I resigned—and took a Civil Service job at Commerce to ease the transition back to D.C. I honored my marriage but threw the Foreign Service career overboard. A troubling pattern was starting to emerge here. I was 40 years old, and I’d already resigned from the Foreign Service twice. At this point, I saw the Civil Service job, which had me implementing tech solutions for Commerce’s global team, as a bridge assignment to return to the private sector.

What does one do when family needs conflict with the needs of the Service? There is rarely a perfect solution.

But within two years I was reinstated and headed off to Panama for a four-year assignment. How had this happened? Luck played a strong part in it—a senior political appointee in Commerce and his deputy wanted to retain me and saw reinstatement as the most logical way to do so. In a roundabout way, I’d gotten the curtailment (at the cost of resigning my Foreign Service commission, applying for and obtaining a Civil Service job to come back to D.C., and then going through a reinstatement process to return to the Foreign Service). As a result, however, my wife was able to spend time with her father before he died, and then my father died just months later.

After another decade, I was deputy assistant secretary for Europe, one of Commerce’s senior-most Foreign Service positions. It was 2019. I was immensely uncomfortable with directives coming from the White House through Secretary of Commerce Wilbur Ross and directly to me, directives that had profound geopolitical consequences but had not been vetted through any interagency process. Congress was at this time initiating impeachment proceedings as a result of White House activities in Europe. Typically, the National Security Council assesses policy options by consultation with relevant agencies. In these cases, this process was completely bypassed, and information was actively withheld (John Bolton’s recent memoir addresses this dysfunction in greater detail).

Foreign Service officers, caught up in this sort of situation, have two honorable options. The first is to suck it up, salute and serve. The second is to resign. I left in November 2019—quietly, and this time after having completed 20 years of service. I had nothing planned, other than a break from paid work. Four months later, the pandemic upended any conventional notion of work, and the presidential election was in full swing. I excised some of the toxicity built up from my last assignment by working on the Biden campaign’s Latin America foreign policy team and joining the ground game in North Carolina and Pennsylvania. Once the change of administration was complete, in January 2021, it was time to return to work.

Where are the lessons here? They seem trivial in print, but I had to learn them the hard way.

First, family matters more than the Foreign Service career (or any other, for that matter). Families sometimes rally in new postings. They can also be torn apart, however. So if you are miserable at work, or your partner is miserable, or your kids are not able to get a good education, I do not think you will regret leaving the Foreign Service to support your family or your principles. After all, private sector demand for Foreign Service skill sets is growing, and there is a strong alumni network in place to help former colleagues. I attribute my new position at Davidson, my former position at Veracity and my work on the 2020 campaign to this network.

Second, I believe that being in the Foreign Service is better seen as a great way to serve the national interest, rather than as a career-long commitment for 20-plus years. Those who serve for a few postings and then leave will always be part of the Foreign Service family. In fact, I would very much like to see our family offer more options to return—some of the finest colleagues I’ve worked with were better for their time outside of the public sector.

Third, I believe that every job is an opportunity to solve problems. Develop and hone problem-solving skills on the job, and force yourself to make the outcomes you’ve achieved the core of your evaluations. For my part, helping U.S. companies succeed in the global market and implementing tech solutions to make my colleagues more productive were clear, quantifiable accomplishments that convey directly into the private sector, making it that much easier for companies to see how I could, in turn, solve problems for them. We all know the colleagues at post who solve problems in every cone and specialty—they are the ones you always want on your team. And when, not if, it is time to leave the Foreign Service, if you’ve become a problem-solver, you’ll never want for a job. 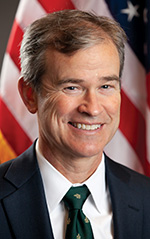 Daniel Crocker, a retired Senior Foreign Commercial Service officer, is the John and Ruth McGee Director of the Dean Rusk International Studies Program at Davidson College. He has more than 20 years of experience promoting and defending U.S. economic security through assignments in Washington, Europe and Latin America. Prior to his diplomatic career, he worked in engineering management positions at Accel and Sequoia Capital, as well as at Benchmark-funded tech startups. He also worked in manufacturing and in oil and gas exploration in the United States and Africa. He is currently a member of the FSJ Editorial Board. 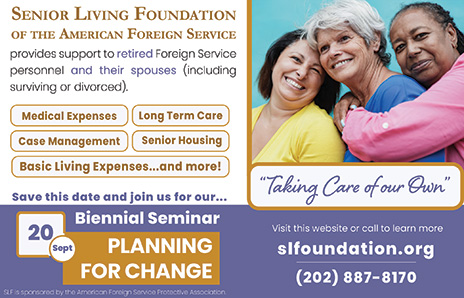