Changing Mindsets on Race at State

Even at a moment like this, when multiracial crowds demonstrate across the nation for an end to police brutality against Black Americans, daily new incidents underscore how pervasive racism is in America, and how much further we have to travel on the path to self-awareness.

Mindsets need to change; and we need to change how we speak about race. We can start with the places where we work, including the State Department. The testimonies that are now appearing of the experiences of Black Americans at State indicate how insidious the environment can be, even in a building that prides itself on diversity.

It is insidious. I have never wanted to discuss my personal experience in public, and it is difficult to do so now. I am a white male, but I have dealt with prejudice all my life through the experiences of my loved ones and the people I have worked with during a 37-year career with the State Department.

The exposure began early. My mother was an accomplished woman from Puerto Rico who spoke English with an accent and faced prejudice because of where she was from. It marked me. As I grew older, and even though I deeply admired my mother, I tended not to mention her origins simply to avoid the silence that would follow when people realized the WASP they thought they saw was someone else. I have long regretted what I did.

Things actually became more difficult inside the State Department. My wife, Fatima, is of multiracial background, and our marriage has been peppered from the start with incidents of prejudice and insensitivity from both liberal and conservative colleagues. Most were not obvious or even intentional; some were. I remember vividly, as we stood in receiving lines at events we hosted for embassy communities, how some white officers or their spouses would walk by Fatima’s outstretched hand without acknowledging her greeting or her existence.

Not everyone was like that, but over the years we found more in common with those who sought to live across racial boundaries, or simply relied on socializing outside the missions where we worked. Fatima worked outside the embassies for more than two decades on behalf of women and minorities. Few ever asked what she did.

We did not entirely “escape” the race question, however. One of our children, now a grown woman, has faced racial insults from childhood, at school and at university, including the proverbial “go back to the jungle” and racially motivated physical attacks.

Legislation and workplace regulations are one thing; coming to terms with how deep the waters of inadvertent bias run is another.

In a defining moment for us, Fatima was “detained” at her workstation in an embassy where I served as ambassador. It was during a security drill after hours. She had permission to work; notwithstanding, three white American guards, with guns pointed at her, yelled at Fatima to get on the ground, put a knee in her back, tied her wrists with zip ties, pulled her up by her underarms and shoved her against a wall. She was humiliated and physically bruised. She did not want to identify herself as the spouse of the ambassador, and she did not. The only other person treated similarly that night was a Black American.

We were taken aback by the inability of some of our colleagues to see what had happened as anything more than an unfortunate incident. Fatima is strong, outspoken and independent: At that moment, however, we chose to leave it in the hands of the system to decide how to improve procedures; and it did so, quietly.

My unease only grew across my career, and not just because of my family’s experiences. I listened to Black colleagues speak in veiled terms of how they felt they were viewed as somehow less capable. I witnessed the efforts of Black, Latino and Muslim colleagues to respond to a sometimes difficult environment. I saw how difficult it was at times for some to have genuinely color-blind reviews of candidates for positions, although I never saw outright prejudice at play.

Many of my white colleagues would never willingly engage in a conversation about race. Kasi Lemmons says it more clearly than I ever could in describing this mindset: “You can live your whole lives without really considering how we live ours.”

It is legitimate to ask what I did in response, as a person in authority, to what I perceived in the workplace. Across my career I sought to create a nondiscriminatory work environment, but the fact is that the vast majority of State’s employees would not consciously discriminate against their colleagues on the basis of race, which is why it is so difficult to address the underlying mindset.

To the best of my knowledge, mission leaders worldwide implemented department guidelines or instructions against discrimination, and they supported updated training as it became available. Black History Month events are central to every embassy I know. None of these actions, however, have been fully successful in addressing the question of the mindset on race.

In finding a way forward now, it is important to acknowledge the efforts made at State over the years to create a better working environment and to expand recruitment of minorities and women. The Academy of American Diplomacy’s latest recommendations on reform are an important addition to the debate on additional steps that should be taken.

This time the conversation has to be explicitly about racism if it is not to be another temporary and, frankly, reactive response to what is happening in our country.

But legislation and workplace regulations are one thing; coming to terms with how deep the waters of inadvertent bias run is another. Diversity candidates appear on lists for senior and ambassadorial positions as a deliberate policy. Yet today only three career diplomat ambassadors worldwide are Black American … a reflection of the unconscious bias the department now says it wants to address?

The sixth- and seventh-floor leadership of the building also reflects the challenge: The Secretary, Deputy Secretary and counselor are white males; of dozens of under secretaries and assistant-secretary equivalents, the overwhelming majority are white and male. None are Black. There are few women. Most special representatives and special envoys are white and male. It is worth asking why this happens in the context of the repeated statements, even today, of the commitment to diversity and inclusion.

And so now we are at another moment of definition for the State Department. The Director General of the Foreign Service and Deputy Secretary are taking an important lead in launching new initiatives to address discrimination and the pain of the moment.

We need, however, to go beyond well-intentioned appeals to dialogue and our better nature and the all-encompassing calls for greater diversity and inclusiveness. These calls are not enough. Perhaps one of the most difficult questions to come to terms with is how, in an institution that prides itself on recruiting the most qualified professionals and promoting diversity, and where most employees do not consider themselves to be part of the problem, we can still see attitudes on race that fall below the standards we want to have as a society.

We could be more pointed in addressing the race question. All discrimination is “unacceptable.” The State Department has been calling for an end to all forms of discrimination since I joined in 1982. This time the conversation has to be explicitly about racism if it is not to be another temporary and, frankly, reactive response to what is happening in our country. The Association of Black American Ambassadors’ unequivocal condemnation of “our society’s stubborn resistance to addressing institutionalized racism” makes this clear.

Our military is showing the way—the June 3 online conversation between airmen and then U.S. Air Force Chief of Staff General David Goldfein and Chief Master Sergeant of the Air Force Kaleth Wright is an example we could emulate at State. The candor of the new Air Force Chief of Staff General Charles Q. Brown Jr.’s highly personal June 5 statement is searing about what the challenge is. Both videos should be required viewing on how to start the conversation.

This is a moment of great hope that things can change in America. That is why Fatima and I joined an early Black Lives Matter street protest over the death of George Floyd. Let’s be honest with ourselves, however: Would State be taking any additional steps on race had there been no video of George Floyd’s death?

The answer is probably not; but now that it is, let’s go further. Let’s call what we are dealing with what it is: racism. We have the problem like every other part of American society. Use the word. Let’s have the genuinely open conversation about racism at State that we need. 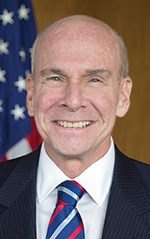 P. Michael McKinley served as a Foreign Service officer for 37 years until his resignation in October 2019. His last position was as senior adviser to the Secretary of State. He served as the U.S. ambassador to Brazil, Afghanistan, Colombia and Peru, and as deputy chief of mission in Mozambique, Uganda and Belgium (Embassy Brussels and USEU). At the State Department, he was deputy assistant secretary in the Bureau of Population, Refugees, and Migration. He is now with The Cohen Group in Washington, D.C.