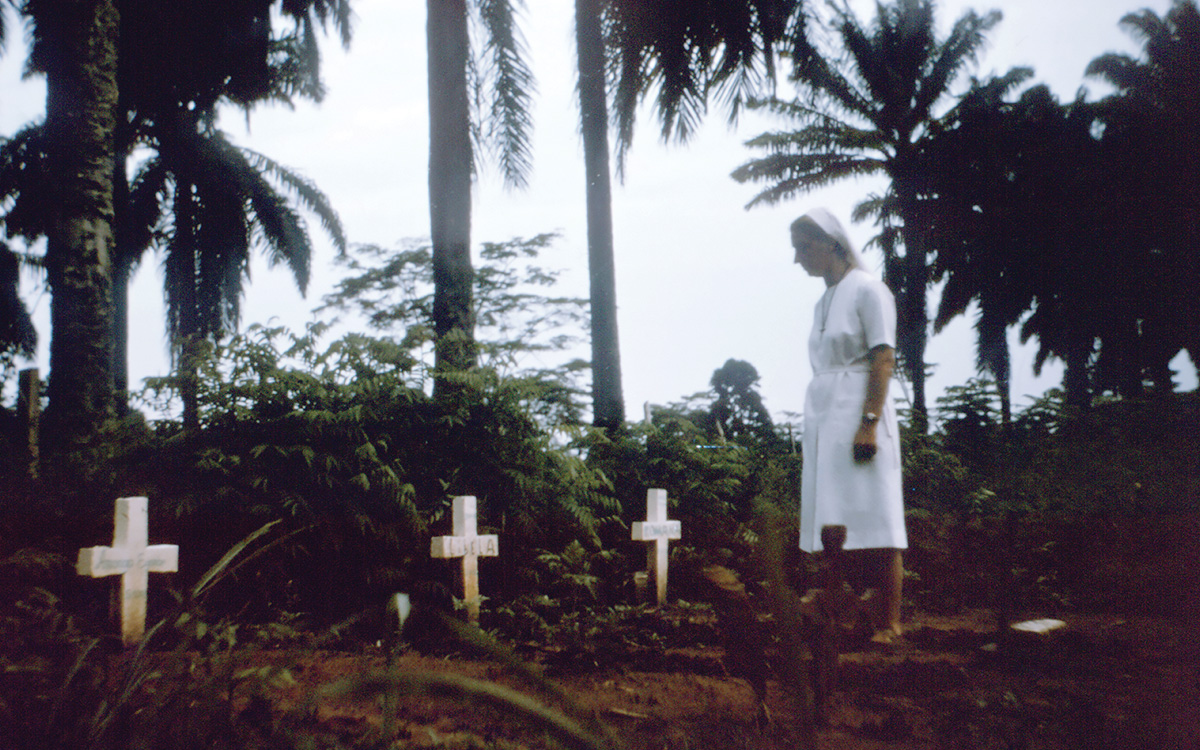 In 1976 Sister Marietta walks among the graves of her colleagues who perished during the Zaire Ebola outbreak of August that year. The Flemish nuns and the African staff of a mission hospital in Yambuku, Zaire, treated the first known patient of Ebola hemorrhagic fever. The virus traveled quickly, and a large number of the mission members and patients died that fall.
CDC / Lyle Conrad

As if two armed uprisings were not enough, my time in Zaire remains memorable because of a third crisis—this one created not by rebels, but by monkeys. In August 1976 the embassy picked up word that two Belgian nuns, working as nurses at a medical mission in the remote Yambuku region of northern Zaire, had suddenly fallen ill and died after being rushed to a hospital in Kinshasa. Soon, reports of other such deaths came in, including no fewer than 11 of that mission’s staff members.

I had heard about something labeled “Green Monkey Fever” when, not long before, it had broken out in nearby Sudan. Believed to be a virus coming from the blood of monkeys, its symptoms ranged from high fevers and nausea to rashes and internal bleeding, with a very rapid and high fatality rate. The same, or a very similar, deathly disease now seemed to be breaking out in Zaire; and the government, fearing a widespread epidemic, placed the afflicted region under a tight quarantine.

My immediate concern was the welfare of a handful of American Peace Corps volunteers serving—and now trapped by the stringent quarantine—in the Yambuku area. After urgent consultations with our Peace Corps director and the embassy’s medical doctor and military attachés, I decided that, one way or another, the stranded volunteers must be quickly extracted from the afflicted region.

It would not be easy: No road travel was permitted, and all commercial flights had been suspended. Even Zairian government officials were reluctant to breach the quarantine, partly because of personal fears of contracting the mysterious disease, and partly because of dangers posed by an increasingly petrified local populace trying to find any way to get out.

Given this situation, asking the Zairian government to rescue our volunteers, while ignoring its own people, was to my mind not the best way to go. But we had to act—the medical risk persisted each additional day they were there; and, understandably, Peace Corps headquarters in Washington was becoming increasingly alarmed.

So we devised our own rescue plan. Using short-wave radio contact with the volunteers, we arranged for them to quietly gather one night at a small dirt airstrip we had discovered in a village near Yambuku. At dawn, our embassy plane—an eight-seat Cessna piloted by our two air attachés—found its way to the strip and quickly took the volunteers on board. By this time, word of the “American rescue” was beginning to spread, and the plane was just able to take off before being besieged by a mob of Zairian would-be evacuees.

On their arrival in Kinshasa, the volunteers were again quarantined together in a safe house. Thankfully, all of them survived. The operation, while not pretty, had succeeded. And my decision to confidentially inform President Mobutu’s office of what we were doing—but only after the operation was well underway—also escaped negative repercussions. In fact, I figured, the government was glad to have avoided the politically delicate position that a request for prior flight authorization would have created.

During the ensuing weeks, a good deal of the embassy’s time was focused on learning more about, and developing protection against, this strange disease that became known as Ebola fever (Ebola being the name of a river that flows not far from Yambuku and into the Congo River). To its credit, the Zairian government, eschewing the possible embarrassment of admitting to the world the seriousness of the emergency, cooperated in organizing an international team of doctors to undertake in-country research.

We at the embassy were deeply involved, helping to bring over from Atlanta’s Centers for Disease Control and Prevention several prominent experts in tropical diseases to play a courageous, leading role in the research effort. No sooner in the country they were off to Yambuku for the first of repeated visits. Meanwhile, the toll of victims was rapidly rising: Within a few weeks, 280 of 318 people infected had died.

Deathly disease now seemed to be breaking out in Zaire; and the government, fearing a widespread epidemic, placed the afflicted region under a tight quarantine.

In his post-operation report, Dr. Joel Breman, a CDC epidemiologist who went to Yambuku, called Ebola “the scariest epidemic of my entire career, and possibly of the last century.” The goal was quickly to identify and isolate the virus, thus permitting the development of an antidote that would prevent the epidemic from spreading throughout the country and perhaps the world. That goal was eventually achieved.

Understandably, the near panic that was gripping Kinshasa included the foreign community. In an effort to inform and, hopefully, calm members of my staff, I invited one of the CDC experts, Dr. Karl Johnson, to brief our embassy country team following his initial visit to the infected area. Meeting first with me in my office, he grimly compared Ebola to The Andromeda Strain, the shocking novel about a deadly extraterrestrial disease.

We then walked into the embassy’s conference room, where we found most of the staff had already seated themselves as far away as they could from the chair reserved for the doctor. Their obvious concern not to get too close to him was readily heightened by seeing his arms riddled with what looked like severe sores and rashes. He smiled and said not to worry: We were only looking at harmless mosquito bites—not at any symptoms of Ebola. We all laughed, although a tad nervously.

If our American doctors were brave in trying to solve this dangerous medical mystery, so, too, was one of our Peace Corps evacuees, a young public health volunteer. Although prohibited from resuming his work and life in Yambuku, he had gotten to know the region well and offered to accompany the doctors on one of their first trips there. Our Peace Corps director, with my somewhat reluctant concurrence, agreed.

One can imagine our second thoughts when, only a few days after the volunteer’s arrival in Yambuku, we received word that he had developed symptoms of Ebola and required immediate evacuation. Placed in a U.S.-supplied “aircraft transit isolator”—a head-to-foot contraption that looked like a custom-made cell—he was flown back to Kinshasa in a Zairian military plane for transfer to a U.S. Air Force C-141 that, with a complete medical team aboard, would fly him to a hospital in South Africa.

But nothing is ever easy in Africa. The victim had to wait some six hours, lying in his isolator in the back of a truck in the corner of a stifling airport hangar far from other people, while the C-141 made its way across the continent from Madrid. Our embassy doctor managed to get water to him, and a portable fan was set up to counter the wilting midday heat. Then, once safely in Air Force hands, the patient had to endure an unusually long and turbulent flight.

It was a frightening life-and-death mission, and we were all immensely relieved to get word from South Africa a few days later that it was not, after all, the deadly Ebola virus. I was equally proud of probably the only government in the world that would go to such an extraordinary extent to safeguard the life of one of its young employees.

Little did I guess how often Ebola would recur in Africa after my time there, including the widespread 2012-2015 outbreak in several West African countries and, more recently, in remote regions of the Congo and neighboring states. At the same time, for a variety of reasons, including the eventual development of vaccines, Ebola has failed to go global like today’s COVID-19. If little else, the 1976 scare served to underscore the critical importance of public health as an issue of foreign policy. 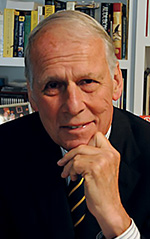 Ambassador (ret.) Walter Cutler served as president of Meridian International Center from 1989 to 2006. A career diplomat in the U.S. Foreign Service, he served twice as ambassador to Saudi Arabia and as ambassador to Tunisia and Zaire (now the Democratic Republic of the Congo). Other overseas postings included Cameroon, Algeria, Iran, Korea and Vietnam. In Washington, D.C., he served as deputy assistant secretary of State for congressional relations and as staff assistant to the Secretary of State. The above is adapted from his memoir, Wandering the World: Personal Recollections of a Life in Diplomacy (Kindle, 2018).