Flying Monkeys in the Embassy

For 24 hours, the most heavily fortified building in Colombo was compromised by a monkey. 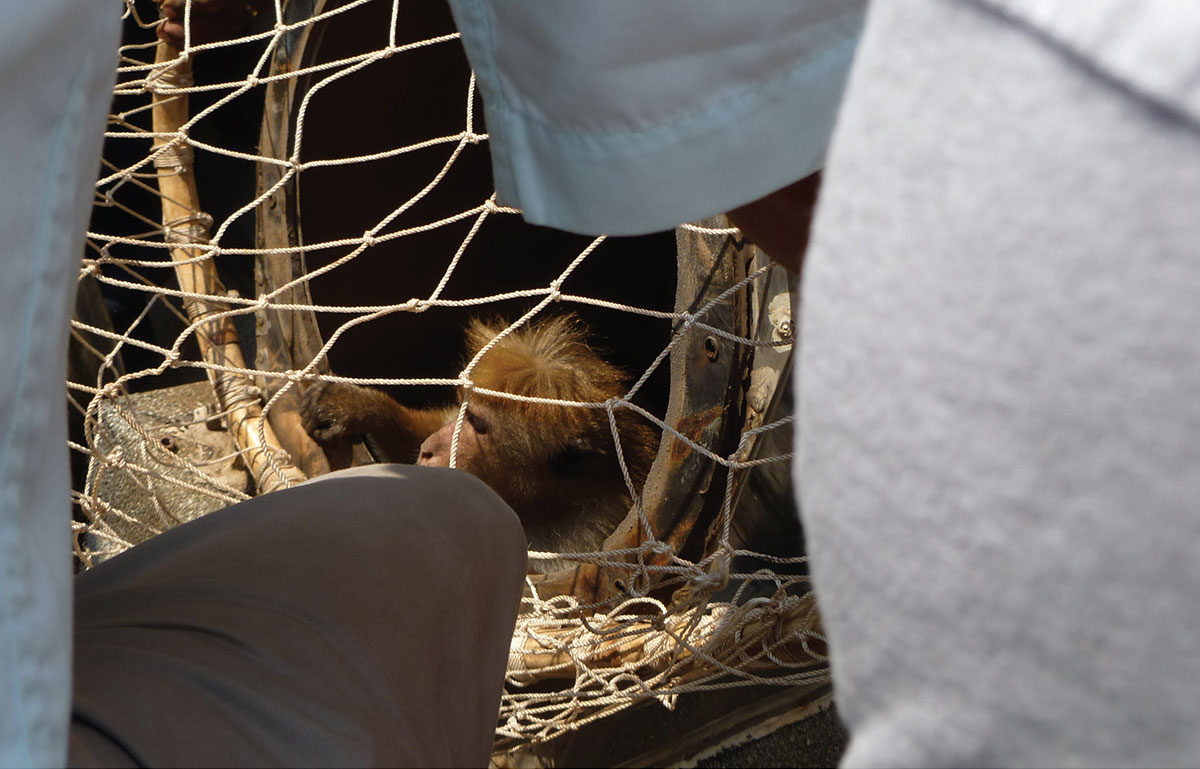 The tranquilized monkey takes a breather at the opening of the air duct before making a daring escape from the waiting net.
Christopher Teal

The embassy was on the verge of being overrun. Sri Lanka had not seen activity like this since the Tamil Tigers were defeated a few years back. Everyone had hoped for a return to normalcy, but now this.

The details were sketchy, as they always are in the fog of war. All that anyone knew was that an intruder had entered the chancery. At first it wasn’t clear if it was just one, or there were many. The Marine Security Guards were on high alert. General Services and Regional Security Offices set up a rapid-reaction task force to poke through closets and rip out ceiling tiles to find a trail and look for clues. 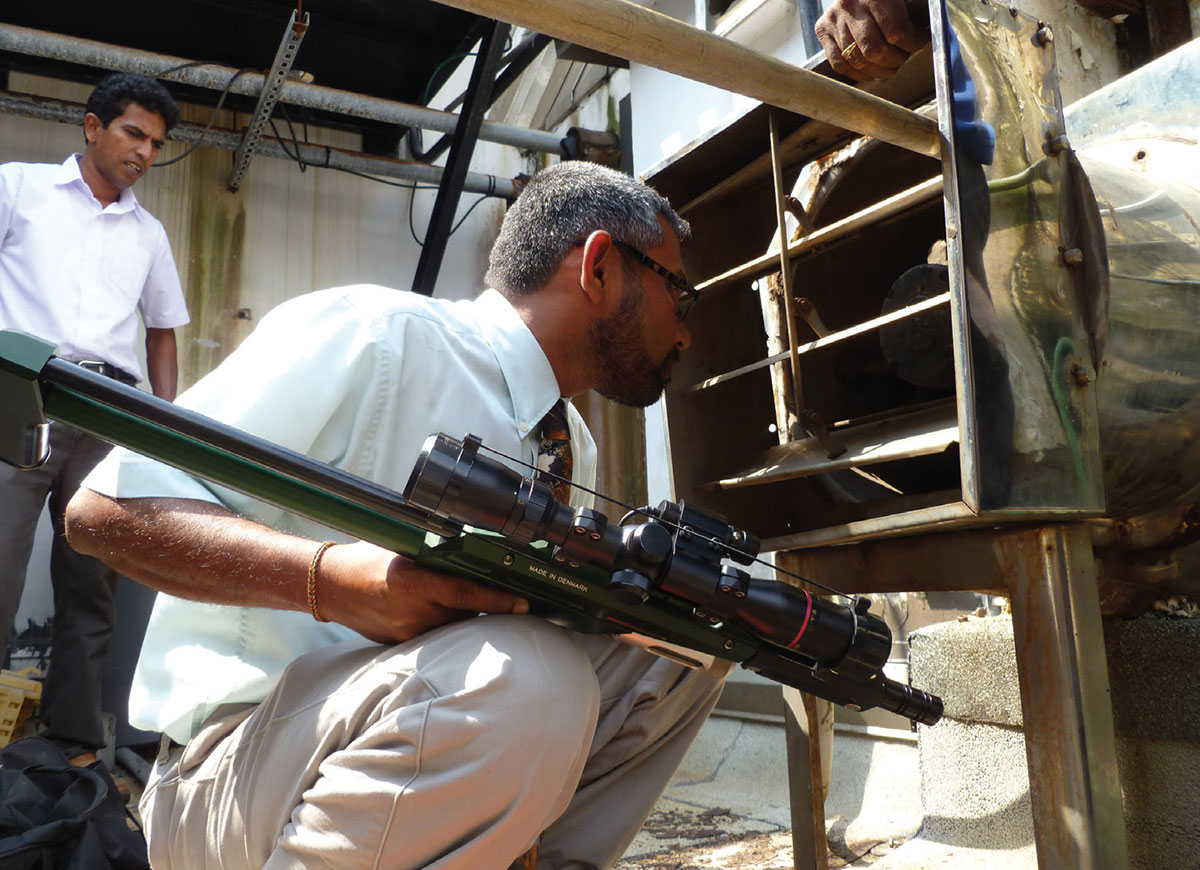 Should everyone be evacuated? RSO rapidly banged out an embassywide warning message: “Ground Floor Locked Down—Please Exit/Enter thru Post 2.”

As the brave GSO and RSO team continued their search and peered into the darkness of the ground floor ceiling, a closet door behind them swung open. Out the intruder casually strolled, not one bit surprised to see a team of men standing at the base of a ladder in the hallway. They turned just quickly enough to see him smirk, and the RSO swears that he shot them a middle finger before scampering up the ladder and into the now-gaping hole of the ceiling tiles. The monkey was loose, back into the bowels of the building.

The RSO message continued: “The ground floor doors are locked down right now because there is a monkey trapped on the ground floor. Until further notice please enter/exit the building thru Post 2.”

It was a full-blown crisis. Now we were getting sit reps. There was discussion of standing up an embassy task force, setting up shifts.

Questions raced through the mind of everyone in the country team meeting. Was this an ordinary monkey? It was smart enough to have made it into the most heavily fortified building in all of Colombo. Maybe it had been trained? Maybe it was a spy monkey? Maybe it was a flying monkey—how else could it have gotten in?

By now it was late afternoon and everyone wondered if we should just send the staff home. The guards outside Post One had left the door open, vainly hoping that the monkey would see daylight and dart out. But by now he moved through the ventilation shafts. This guy was smart, and seemed to know where he was going.

The GSO/RSO team was augmented with additional staff. Homemade monkey catchers were quickly assembled. Someone grabbed an extra-large, empty bag from the diplomatic pouch. Maybe they could corner him, and throw the bag over his head? But the ambassador was on leave and the country team was not sure that it was authorized to place mail bags over monkeys’ heads and conduct renditions. Washington wouldn’t be awake for hours, so no one was certain about the proper course of action.

Thankfully, the deputy chief of mission jumped into the discussion. Find some bananas, he ordered; we will lure him out!

The unthinkable had happened—the monkey had not only made it behind the hardline, he was now moving up into the classified area.

While warehouse staff ran out to purchase bananas, the nurse cracked open the medical kit. We will have to spike them with Valium, she said. He’ll grow tired, and then we can just scoop him up. Valium was passed around to other worried staff, as well, to reduce the stress.

Then another sit rep. The unthinkable had happened—the monkey had not only made it behind the hardline, he was now moving up into the classified area. This was clearly no ordinary monkey; espionage was now a very real concern.

Try as they might, ripping out ceiling tile after ceiling tile and opening closets to pull wiring, no one could get ahead of this beast. As night fell on Colombo, everyone uneasily began to drift home. It was no use fighting him at night, we all knew that. Meanwhile, Valium-laced bananas were strategically placed throughout the building. A hungry political officer may have accidentally eaten one, but guards continued to place the rest of the bunch throughout the embassy as the staff anxiously awaited the dawn.

With the new day, a local veterinarian was called in. The guard force managed to find the creature once again as he scampered into one of the air ducts that led to the roof. Though it was barred from the outside, facilities maintenance managed to block his return path so that he could not make it back down the shaft. This might be the moment.

Quickly, a crack team assembled to accompany the vet. RSO, Management, DAO, even Public Affairs descended onto the scene. They all trekked up to the roof with the vet, who was clearly nervous by being surrounded by such a large contingent of Americans armed with broomsticks, mailbags and bananas. Making it to the roof, they found the air shaft in question. Though it was dark inside, they could make out the fingers occasionally twirling the blades of the ventilation fan from the inside.

The vet calmly opened his briefcase and removed his large dart gun. Loading the gun, he took aim through the bars of the vent, and pulled the trigger as everyone held their breath—click. He’d forgotten to load the CO2 canister for the airgun.

We shuffled anxiously as the monkey continued to spin the blades of the fan from behind the bars, toying with us. Finally, now fully loaded, the vet took aim once again. Pop! This time he struck his target with an accuracy that only two feet of distance will give you. 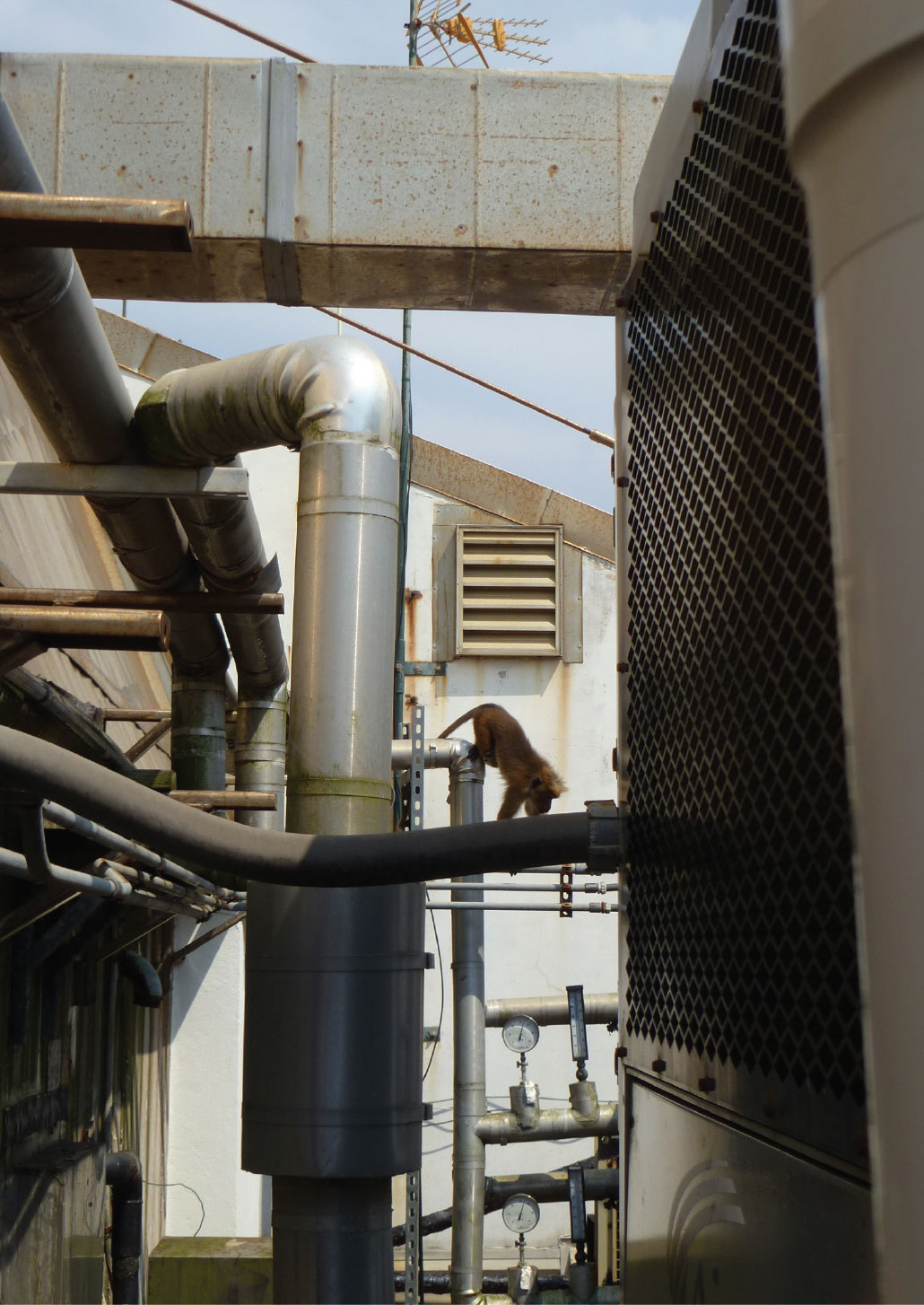 Monkey on the loose at Embassy Colombo.
Christopher Teal

Enraged, the monkey removed the tranquilizer from his arm and began to chew on it. Then the GSO staff began to carefully remove the front grate of the air shaft, placing a net before the duct as the vent was removed.

How long before the dart takes effect? someone asked.

Hmm, maybe we should have waited a little longer, was the collectively unspoken thought just as the monkey flew from the confines of the crawl space and into the waiting net. But his acrobatics confirmed our spy theories when he managed to untangle himself and escape to scurry along the rooftop.

He weaved and dodged and evaded capture for several more minutes, making his way through the grates on the outside of the building. It was at this point that it occurred to everyone that a drugged monkey was not likely to hang on for very long to the side of an embassy.

Quickly our courageous assistant RSO rushed to the ground level, where he spotted the increasingly drowsy primate clinging to a drainage pipe. The warehouse crew brought over a large piece of Styrofoam and our A/RSO stood four floors underneath where he “thought” a heavily sedated monkey “might” fall. This is undoubtedly beyond the normal security training offered by DS, but monkey catching might not be a bad thing to add to an expanded curriculum.

It didn’t take long, and as the creature’s grip loosened from the pipe alongside the building, he fell to earth. Maybe he wasn’t a flying monkey after all. Seeing our now sleeping “spy” begin to fall, the reflexes of our A/RSO took over, and the monkey gracefully went right into the net (after only a small bounce).

The vet and his embassy entourage quickly gathered downstairs to examine the poor beast. He lay completely still, but the deep rhythm of his breathing and an absence of any visible signs of massive bleeding or broken bones led the vet to declare, “He’s going to make it.”

Twenty-four harrowing hours later, the crisis ended. The compound was secure, and management sent out a triumphant email: “The monkey saga has successfully concluded.”

At least for today, that is.

Christopher Teal is an FSO and a former member of the FSJ Editorial Board. Aside from Colombo, he has served in mostly monkey-free environments, including Santo Domingo, Lima, Guadalajara and Washington, D.C. He is now consul general in Nogales, Mexico. He is the author of Hero of Hispaniola: America’s First Black Diplomat, Ebenezer D. Bassett (Praeger, 2008).