Helping the country get its avocados into the export market is a win-win for Colombia and the United States.

Roberto Guzman of APHIS, at left, and Emilio Arevalo Peñaranda of ICA and their team look out over avocado farms in Colombia’s mountainous terrain.
Courtesy of Marc Gilkey

At each of my postings, one central agricultural issue seems to rise above the rest. Whether it is Ya pears in China, guavas in Mexico, mangoes in both Pakistan and India, or pomegranates in Afghanistan, one commodity will always come to the fore and define that tour.

When I arrived in Bogotá in the fall of 2016, I quickly realized this tour would be no different. Avocado market access was at the core of all issues. It was a talking point in nearly every speech by Colombia’s President Juan Manuel Santos. Clearly, exporting that crop to the United States was a top priority.

Although the Animal and Plant Health Inspection Service is at the heart of most agricultural trade issues, it tends to have a light footprint overseas—typically a Foreign Service officer and two locally employed staff members, one technical and one administrative, at some 20 posts around the world, each covering a large geographic area. APHIS International Services helps resolve sanitary/phytosanitary issues on the global stage through its cadre of FSOs and local employees. We collaborate with foreign counterparts at diplomatic, technical and policy levels to promote science-based regulatory transparency that leads to safe agricultural trade.

Opening a New Market: The Process 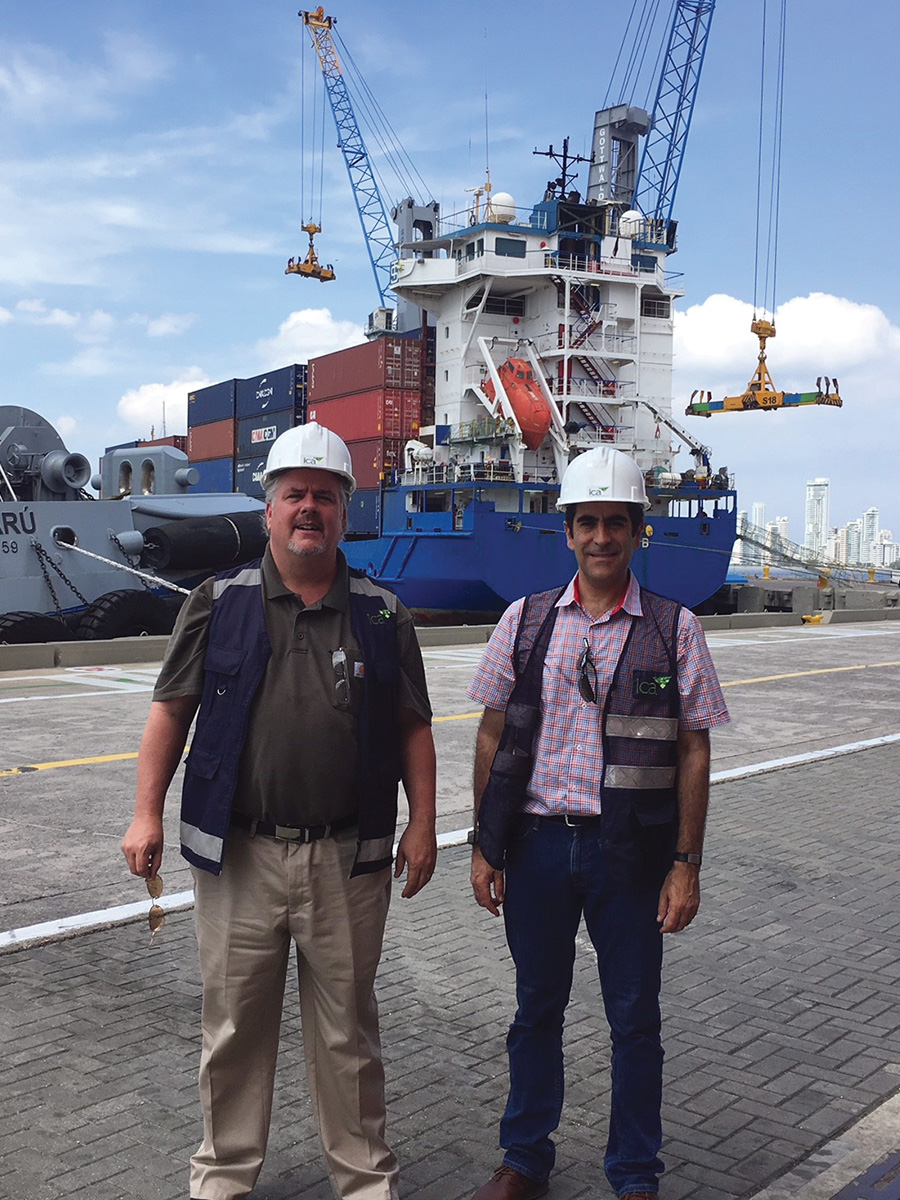 Roberto Guzman, at right, with SFSO Marc Gilkey at the port of Cartagena where the avocados leave Colombia.
Courtesy of Marc Gilkey

In Colombia I was fortunate to have Dr. Roberto Guzman, a locally employed technical expert, on the ground. He is a veterinarian, but in our jobs we have to do everything; I’m an entomologist but work on animal health issues, for example, in addition to insects. Dr. Guzman had already been laying the groundwork for getting Colombian avocados into the U.S. market. This involved disseminating information to growers about the potential requirements for export, such as conducting surveillance for insects, registering production areas, establishing buffer zones and safeguarding the product (from insects) in packhouses.

The process to get agricultural products into the U.S. market is managed by the U.S. Department of Agriculture and APHIS. First, APHIS conducts a Pest Risk Assessment of the production area, which identifies and evaluates all insect pests associated with the commodity. A risk management document follows that explains how the pests can be mitigated or eliminated. Next, a proposed rule is published that invites public comment. After the comments are fully addressed, USDA-APHIS finalizes the rule in consultation with the Office of Management and Budget, and it is codified in the Code of Federal Regulations and has the force of law. At that point the commodity (in this case, avocados) can be exported to the United States. Sounds simple, right?

Not quite. The main problem with avocado production here is the terrain. If you look at the topography of Colombia, you will see that the greatest challenge in traveling to production areas and transporting avocados is the Andes Mountain range, which branches out into three separate chains, or cordilleras. Avocados are grown on its hillsides for good drainage, which allows them to thrive. I had never before seen commercial production in such steep and remote locations.

What’s more, in 2016, the country’s 50-year-long armed conflict was finally being brought to an end, and land previously unreachable because of the conflict was now available for farming and development. Roads and packhouses were being built to connect the fruit with avenues for export. Because land was made available at different times, however, there was no single, consolidated region for avocado production, and this increased the difficulty of pest identification and detection and complicated the process of getting the product cleared for export. If certain insects are found in the fincas (farms) producing avocados for export, that area is disqualified from shipping them until the pest issue is resolved.

Getting Down to Work

The hardest part was not the travel to the various regions; it was explaining these difficulties to Washington. Since the rulemaking process in Washington was not something we could control, Dr. Guzman and I simply got to work in Colombia. We set out for the fields, mindful that they had been inaccessible for more than 50 years because of the conflict, and that no well-meaning entomologist or veterinarian had been allowed or would have dared to go there during that time.

Our primary concern was supporting our colleagues in the Institute of Colombian Agriculture. Our Colombian counterparts at ICA were our hosts and were responsible for the surveillance and trapping of plant pests and, ultimately, certification of the phytosanitary integrity of shipments exported to the United States. With ICA colleague Emilio Arevalo Peñaranda, we embarked on a yearlong journey, meeting with producers across the many regions of Colombia.

We visited farms and packhouses to sensitize the managers on what exactly would be needed to export. At each place we visited, we could see the foundations for commerce and agriculture being cultivated. Avocado trees that shouldn’t have been there were growing on slopes; and while I had difficulty fathoming how they were planted or harvested, the signs of “green gold” were evident, bringing prosperity to regions that had suffered for so very long.

We visited farms and packhouses to sensitize the managers on what exactly would be needed to export.

Everywhere we traveled, we heard stories of the conflict and of years of struggle. I’m not saying that avocados have solved these problems; but from my vantage point, this emerging market and all those growing, harvesting, packing and moving avocados are making a bold statement about Colombia.

When the final rule establishing the legal basis for granting market access was published on Aug. 15, 2017, it was greeted with tremendous excitement and coincided with the visit of Vice President Mike Pence to Colombia. There were many handshakes, and many photos were taken and plaques given. And I imagine that a number of employee evaluation reports (EERs) were filled in with mentions of avocado access.

Economic diplomacy is so much more than U.S. exports. It is about trade—bilateral trade—and in the agricultural realm, it is essential to have healthy, safe movement of products both ways. Further, in countries like Colombia and, for instance, Afghanistan, finding alternative livelihoods to illicit drug production is a key to stability and economic freedom. This, in turn, provides a platform for U.S. businesses to thrive. We have seen that in Colombia—the more avocados they export, the more rice (from the United States) they can import.

I know for certain that this would never have happened without APHIS or ICA—or, more importantly, without the people of these organizations. The relationships formed by years of working together—the common bond of working professionally as a regulatory official where political science is often the common denominator—are worth nurturing. If not for Roberto Guzman of APHIS and Emilio Arevalo Peñaranda of ICA working together, we would still just be talking about avocado access, not watching the growth of a new market.

Years ago, when I started working as a plant protection and quarantine officer, I received my USDA badge, with the following inscription on the seal: “Agriculture Is the Foundation of Manufacture and Commerce.” It has taken me more than 20 years to truly understand that statement. 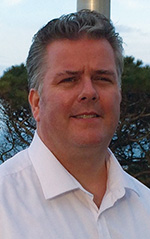 Marc Gilkey is a Senior Foreign Service officer who has served for 25 years with the U.S. Department of Agriculture’s Animal and Plant Health Inspection Service. He is currently posted to Bogotá, where he is the regional manager for Latin America and the Caribbean. He served previously in Afghanistan, Mexico, India, Belgium and Colombia, in addition to assignments in San Francisco, California, and Washington, D.C. He is a U.S. Navy veteran. 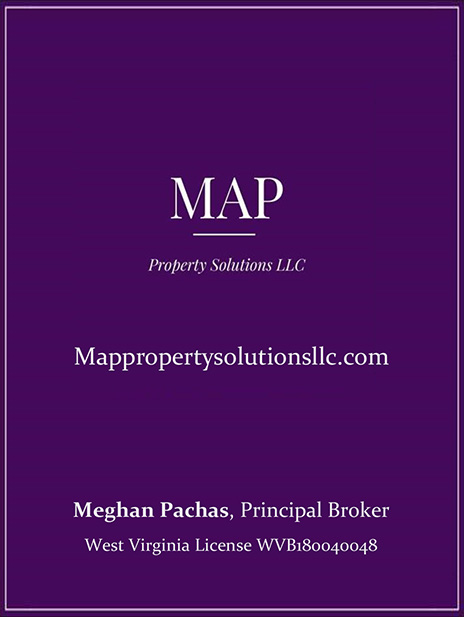