The Foreign Service Journal > April 2017 > Diplomacy: What We Do, and Why We Do It

On Jan. 25, career FSO Tom Countryman was on his way to Rome for an arms control conference when he received word to return home. He was one of the senior State Department officials asked to step down from their positions. The gracious and inspiring remarks he made at his Jan. 31 retirement ceremony circulated quickly inside and outside of the State Department.

As part of the Journal’s ongoing discussion about loyalty, dissent and the responsibilities of members of the Foreign Service, we share Mr. Countryman’s remarks (as prepared) here, for the record.

Preparing my retirement ceremony remarks on fairly short notice, I intended them to be a quick personal reflection on why the Foreign Service meant so much to me. I was surprised and pleased that many colleagues found my talk inspiring and shared it.

One month later, my apprehension—that this White House will not learn to depend upon the knowledge and talent at State—has only grown. What has also grown is my admiration for those who remain in the department and who persist in dedicated and imaginative service to the American people.

I hope readers find my remarks of value as they ponder how each of us can best serve our nation while staying true to our personal values. I recommend more strongly the farewell address of one of our great ambassadors, Dan Fried, who brilliantly explained how U.S. foreign policy has served well the rest of the world and our own most noble values.

Some of you have asked if recent events have left me disgruntled. The answer is no; I am probably the most “gruntled” person in the room. When Ambassador Robert Pelletreau retired 20 years ago, he said, “The State Department doesn’t owe me anything. It has given me everything.” It is the same for me.

In my very first tour, the department gave me more than I could ask for in a lifetime. It sent me to Belgrade, where in 1984 I met my wife, Dubravka Trklja, the greatest thing ever to happen to me. She reminds me often that she could have had a better husband, but I suspect she feels what I feel so strongly: that I could never have had a better friend. And as a result, I have something else, the only thing for which you should envy me: Stefan and Andrew, the two best sons and the two most remarkable young men anyone could have.

The department gave me and my family the opportunity to see the world, and not just as tourists. It allowed me to see the reunification of families divided by the Iron Curtain, and to see Israelis and Palestinians negotiate face to face. I saw—and contributed a little to—the restoration of democracy in Serbia. And for the last few years, it’s given me the chance to speak for the United States about a priority shared by 11 successive presidents: reducing the risk of a nuclear holocaust.

This career gave me a constant resurgence of energy in the form of bright young officers with brilliant careers ahead of them, people like Rafik Mansour, Patrick Connell, Daniela Helfet, Seth Maddox, Lizzie Martin and David Kim.

From them I learned the four words central to diplomatic success: “High Road, Hard Ball.” And it gave me the great honor to stand beside exemplary Secretaries of State like Madeleine Albright, Colin Powell, Hillary Clinton and John Kerry.

The department gave me the chance to be part of, and to lead, amazing interagency teams at embassies abroad, in the European Bureau and at the White House. These were great organizations; but it was only when I spent 11/2 years in the Political-Military Bureau and five years in the International Security and Nonproliferation Bureau, that I came to fully value the true strength of the department, a Civil Service cadre every bit as talented as the Foreign Service. It was perhaps my highest honor to learn from, to guide and to take credit for the accomplishments of the deepest bench of experts in any agency.

The State Department owes me nothing. But we still owe America a lot. We still have a duty—you have a duty, to stay and give your best professional guidance, with loyalty, to the new administration. Because a foreign policy without professionals is, by definition, an amateur foreign policy. You will help to frame and make the choices. Because that is what we do.

Our work is little understood by our fellow Americans, a fact that is sometimes exploited for political purpose. When I have the opportunity to speak to audiences across this amazing land, I explain: “We do not have a Department of State—we do not have a foreign policy—because we love foreigners. We do it because we love Americans.”

We want Americans to sleep the sleep of the righteous, knowing that the smallest fraction of their tax dollar goes to ease poverty and reduce injustice. We want them to know that our consular officers are the first of many lines of defense against those who would come to the United States with evil purpose. We want the families of America’s heroes—our servicemen—to know that their loved ones are not put into danger simply because of a failure to pursue nonmilitary solutions.

And we want Americans to know that the torch borne by the Statue of Liberty is not just a magnet for immigrants: It is a projector, shining the promise of democracy around the world. The United States is the world’s greatest economic power and the world’s greatest military power; and, with your vigilance, it always will be. But the greatest power we project is hope, the promise that people can establish liberty in their own country without leaving it.

I’ve seen it in the country second dearest to my heart: Serbia. I saw democracy born in Serbia. I saw it stolen. I saw and played a minor role in its restoration. And I know this: that if a generation stands up and insists upon defending the rights of the people, they will succeed. And if the next generation stands up and resists every corrosive attack on democracy, they will triumph.

If we wall ourselves off from the world, we will extinguish Liberty’s projection, as surely as if, as the Gospel says, we hid our lamp under a bushel basket. If we do not respect other nations and their citizens, we cannot demand respect for our citizens. If our public statements become indistinguishable from disinformation and propaganda, we will lose our credibility. If we choose to play our cards that way, we will lose that game to the masters in Moscow.

If our interaction with other countries is only a business transaction, rather than a partnership with allies and friends, we will lose that game too. China practically invented transactional diplomacy, and if we choose to play their game, Beijing will run the table.

Business made America great, as it always has, and business leaders are among our most important partners. But let’s be clear: despite the similarities, a dog is not a cat. Baseball is not football. And diplomacy is not a business. Human rights are not a business. And democracy is, most assuredly, not a business.

Why We Do It

Each of us came to this work with our identities more or less fully formed, and we have preserved our values, with greater or lesser success, against the professional deformation caused by any bureaucracy. I myself came here with my identity framed: as a Christian, as an Eagle Scout, as a taxpayer.

These didn’t require me to go into the State Department, but they define my obligations as a citizen: to spend tax dollars wisely; to look out for the best interests of the United States and its people; to share the best of America with the world; and to be not only optimistic, but also—to use a word so suddenly fallen from favor—altruistic.

I line up with Steven Pinker. In his book, The Better Angels of Our Nature, Pinker describes the “escalator of reason”—“an intensifying application of knowledge and rationality to human affairs.”

That is how we do it. That’s the very definition of the work I’ve been privileged to do, that I will pursue now in different clothes, and that I leave to you.

That’s the sermon, and in a moment I will let you go in peace. First, I want to thank you for so many messages of support and appreciation. One of you here compared the situation to the scene in “Star Wars” when Obi-Wan Kenobi is struck down, and I found that touching. Another compared it to the scene when Princess Leia strangles Jabba the Hutt, and I found that confusing.

The most meaningful came from my son Stefan, a future Nobel laureate in physics, who wrote: “I am proud of your decades of service to this country and the world. You gave everything you could for the people of this world in a slow and painful line of work. You have given more than your share. The values you upheld in your career are part of what makes me who I am.”

And that is why we do it.

Even if you don’t have your own children, what you do in this building tomorrow can mean another generation will live in a habitable world and can enjoy peace and liberty. If we are firm in our principles, steadfast in our ideals and tireless in our determination to uphold our oath—to “defend the Constitution against all enemies, foreign and domestic”—then for many generations, other Americans will stand in this spot with the same satisfaction and hope I feel today.

I leave you with one last thought, from one of my favorite philosophers. If you’ve never read him, or not for many years, I urge you to take the time now. His name is…Winnie the Pooh. And he said: “How lucky I am to have something that makes saying goodbye so hard.”

Thank you and God bless you! 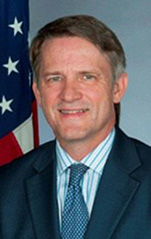 Thomas M. Countryman joined the Foreign Service in 1982 and retired in January 2017. He served as acting under secretary of State for international security affairs from October 2016 through January 2017 and as assistant secretary of State for international security and nonproliferation from September 2011 through January 2017. He served overseas in Belgrade, Cairo, Rome and Athens. In Washington, he served in high-level positions at the State Department and at the National Security Council, and in New York City at the U.S. Mission to the United Nations.