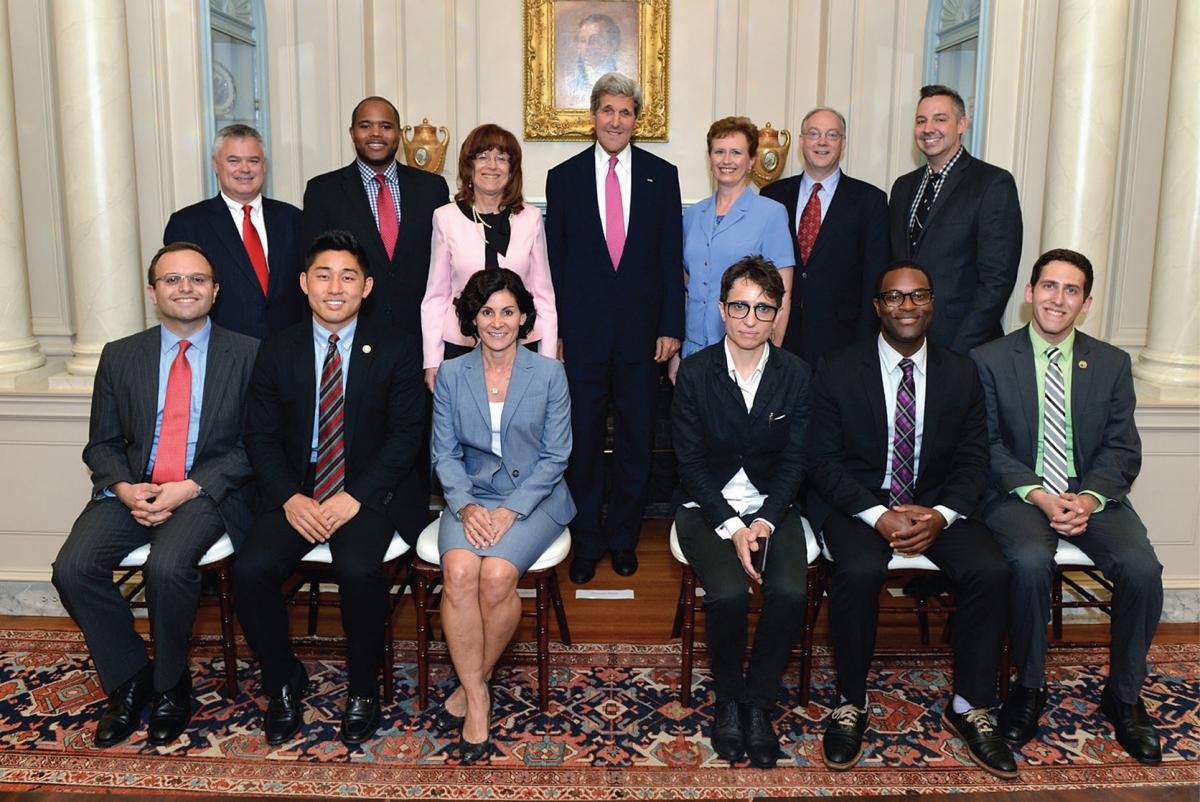 As our country has changed, so, too, has GLIFAA. The group that was founded in 1992 as Gays and Lesbians in Foreign Affairs Agencies now welcomes more and more members who are neither gay nor lesbian. Some of them identify as bisexual or transgender, and some as allies.

With that reality in mind, this year our members voted to make our acronym our name: GLIFAA. Everyone has always been welcome in GLIFAA, and we want to make that openness even more explicit. Similarly, our new tagline is “LGBT+ Pride in Foreign Affairs Agencies.” I suspect most FSJ readers will know that LGBT stands for lesbian, gay, bisexual and transgender; we like to think the + stands for every additional “letter” one could conceivably think of—including any that our allies might choose.

For those who remember the dark days of the “Lavender Scare,” or have read the book of the same title, and know about the terrible witch hunts to root out all the “pansies” and “pinkos” at State throughout the Cold War, but particularly during the 1950s, our March 24 event with six “out” ambassadors was an inspiring reminder of just how far the march toward equality has brought us.

Imagine: Six out and proud ambassadors on stage, each talking about the work he can do more effectively because he can be open. Now imagine that panel being moderated by Stuart Milk, nephew of the late San Francisco Supervisor Harvey Milk, who so famously showed us the importance of being out in government service. This may have seemed unimaginable to GLIFAA’s founders in 1992, but in March the whole thing was recorded and beamed around the world on msnbc.com for any post to use as they tell this very American story.

Many of GLIFAA’s founders were in the room for that event. One, Ted Osius, was on the panel as an out ambassador. Another, Jan Krc, was among those who were once kicked out of the Foreign Service just for being gay. Jan sued to get back in, lost, and then, after the law changed, showed his great patriotism by signing up to join our proud Foreign Service once more.

Have we reached full equality yet? If the next A-100 class were to welcome a lesbian candidate, her straight brother and their transgender sister, would each of them have an equal shot at success in the Foreign Service?

More than half of Foreign Service postings abroad are in countries that will not grant diplomatic status to our family members.

A Good Start, But…

Let’s start with the positive: the great progress we have seen. Employees who fall in love with someone of the same sex may now marry legally in 37 U.S. states and the District of Columbia. The federal government recognizes those marriages, and the employees and their spouses all enjoy the same benefits and protections from Uncle Sam as their heterosexual colleagues. In addition, transgender individuals are serving proudly in the ranks of the department and are counted among family members within our Foreign Service community. And in February, Secretary of State John Kerry announced the appointment of Randy Berry as the first Special Envoy for the Human Rights of LGBT Persons.

With all those accomplishments, why aren’t we there yet? Well, to start, many foreign governments do not recognize our relationships. More than half of Foreign Service postings abroad are in countries that will not grant diplomatic status to our family members. In some of those societies, both the government and some citizens are actively hostile to LGBT+ persons, and GLIFAA members serving in such places face discrimination, harassment and violence.

The LGBT+ staff who come to GLIFAA for support are not surprised to learn how much discrimination there is around the world, but they are surprised to learn how little the department does to push back against those governments. Too often, we hear that it’s the employee who feels pushed—either to go along and stop complaining, or to find another job.

All of us at GLIFAA are so proud of the six out ambassadors, and of the president and the Secretary of State under whom they serve. The Obama administration has appointed more openly gay ambassadors than all its predecessors combined. Still, we have not yet seen an out woman, or an out ambassador of color. If we’re going to live up to the example of Harvey Milk and other LGBT+ pioneers, we need Secretary Kerry to keep his promise to be the first Secretary of State to appoint openly lesbian, bisexual and transgender chiefs of mission, as well.

This year, transgender employees and family members in the foreign affairs community finally gained access to health insurance. Before that, the Office of Personnel Management required all plans to exclude any care related to gender transition, so many health care providers interpreted that language so broadly that all care for a person who had transitioned was excluded. Thankfully, OPM has changed, and those hurtful days are over. We salute the American Foreign Service Protective Association and Aetna for leading the way by offering plans that welcome our transgender colleagues.

Still, our transgender peers cannot yet count on well-informed, discreet handling of information around their gender status in all personnel, medical and security channels, nor within communities at posts abroad. Being transgender is very different from being lesbian, gay or bisexual. While some are proud to be out, many other transgender individuals want nothing more than to be quietly known as members of the gender to which they belong. Each of us should support their wishes in that regard, and address them as they wish to be addressed.

Many well-meaning friends and colleagues ask, “Now that gays and lesbians can get married just like anyone else, should we do away with domestic partner protections?” The answer is that, quite simply, the unique challenges faced by GLIFAA members mean that we can’t get married “just like anyone else.” Imagine if that lesbian officer, her straight brother and their transgender sister are all hired into A-100 as Russian speakers, then posted to Moscow, where all three fall in love with Russian women. Who would claim that these employees are similarly situated, much less that each can get married—in Moscow or anywhere—“just like anyone else”?

There is simply no comparison in terms of the challenges they face—and that’s why a small but important number of GLIFAA members might never feel safe getting married. In countries around the world, a marriage certificate is a public record, and the sad truth is that any foreign diplomat can march into a Washington, D.C., court and say, “I want a copy of Svetlana’s marriage certificate right now.”

A small but important number of GLIFAA members might never feel safe getting married.

Today, most American companies recognize all domestic partnerships. Wal-Mart and Olive Garden are among those who give domestic partner benefits to their staff, gay and straight alike. More and more young people join the Foreign Service and go abroad with unmarried partners, whether the department pays for it or not. What ambassador would like to tell a partner, gay or straight, in the middle of a natural disaster or terrorist attack: “We’re evacuating post, but I guess you’re not a recognized eligible family member, so best of luck and let us know how it works out?” We believe the fairest way forward for the department is to follow the example set by American business: count all domestic partners as EFMs.

Finally, as much as this progress has benefited our American colleagues, we must remember that our locally employed staff in most countries do not enjoy the same rights and protections, either under U.S. law, or in their home legal systems and societies. In many countries, these colleagues are exposed to severe discrimination, harassment, violence, arrest or even death if they are known or suspected to be LGBT. Sometimes we can and do help LE staff in dire need with asylum applications, but the process of being forced to leave home for your own safety is inherently a traumatic one.

The Importance of Hope

U.S. missions abroad must reflect our highest standards and the full breadth of our society. So it is important to continue expanding the visibility and diversity of LGBT+ colleagues and family members in the foreign affairs community.

We need to ensure that everyone is up to date on policies that have removed earlier discrimination. And we must press foreign governments to recognize and protect all U.S. diplomats and their families, regardless of sexual orientation or gender, even as we press them to extend equal protection to their own LGBT+ citizens.

Harvey Milk famously said “You gotta give ’em hope,” and for all of us in GLIFAA, and for so many people who are struggling around the world, our out ambassadors are doing just that.

Though it has been a long time coming, our country’s progress toward tolerance is inspiring. Although much work remains, we know that we have a president and a Secretary of State who have done a great deal, and who appreciate the unmet challenges.

I remain optimistic that by the end of their terms, we will see a Foreign Service that even better represents the full diversity of our great country. And, I remain optimistic that when I’m in Jan Krc’s shoes, looking back on all I’ve seen in my career, I, too, will see a Foreign Service that is stronger and more diverse than ever. We wouldn’t be honoring Harvey Milk’s sacrifice if we settled for anything less. 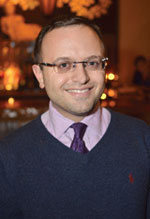 Selim Ariturk, a Foreign Service officer since 2005, teaches public diplomacy training courses at the Foreign Service Institute. His overseas postings have included Seoul, Baku and Erbil. The president of GLIFAA (originally Gays and Lesbians in Foreign Affairs Agencies), he previously served as that organization’s policy director, vice president and first post representative coordinator (when that position was created in 2009). The views expressed here are his alone and not necessarily those of the U.S. government.