The Foreign Service is the face of America around the world, both literally and metaphorically. Yet while three women and two African-Americans have served as Secretary of State in the past 20 years, the U.S. diplomatic corps is not so diverse. Historically, and for the bulk of its existence, the U.S. Foreign Service was comprised of upper-middle class white males. This trend held true until the mid-to-late 1970s, when the State Department developed programs and launched various initiatives designed to ensure that U.S. embassies and consulates around the world look like America: diverse and multicultural. The goal remains an ambitious one, and the results so far have been mixed.

The State Department has had great success in recent decades attracting growing percentages of female officers. The trends for both Foreign Service officer and specialist A-100 orientation classes reflect increasing numbers of females in each class. In 2014, one A-100 class (the 178th) had more women than men (52 women, 48 men). In general, however, despite the narrowing gap, most classes remain male majority. Overall, women represent nearly 40 percent of all active-duty officers. But there is still work to be done; a 2010 study by Women in International Security documents “a pronounced and persistent gender gap in the Senior Foreign Service.”

In recent years, State has done well in recruiting officers from a wide variety of backgrounds through the effective use of internship programs. However, when you look at the mid-level and senior ranks, the numbers are nowhere near what they should be. Eighty-two percent of current FSOs are European-Americans and they hold 86 percent of senior staff positions at State.

The State Department does support the efforts of affinity groups to foster minority advancement and success. I liken these organizations to the clubs found on any college campus that cater to various groups. For African-Americans, there is the Thursday Luncheon Group—the oldest affinity group at State—and the Carl T. Rowan Chapter of Blacks in Government. Other affinity groups include the Hispanic Employees Council of Foreign Affairs Agencies, the Asian-American Foreign Affairs Association, GLIFAA and the Pickering and Rangel Fellowship Association, to name but a few. The groups that advocate for women in the Foreign Service include Executive Women @ State and Balancing Act, which focuses on the State Department’s work-life balance policies and priorities.

The primary purpose of all affinity groups is to represent, advocate for and support their constituent members. One drawback of this model, however, is that each group operates on a purely volunteer basis and, due to the transient nature of the Foreign Service, often struggles to remain vibrant and active within the confines of the department’s mandates. Thankfully, the various organizations have conducted enough joint advocacy to pressure State to give more sustainable, consistent support to their work.

State has made progress on recruiting minorities through two innovative programs: the Thomas R. Pickering Foreign Affairs Fellowship Program and the Charles B. Rangel International Affairs Program. The flagship Pickering Fellowship, established in 1992 and administered by the Woodrow Wilson National Fellowship Foundation, and the Rangel Program, established in 2002 and administered by the Ralph J. Bunche International Affairs Center at Howard University, are both entirely funded by grants from the Department of State.

Both programs are designed to attract outstanding individuals from all ethnic, racial and social backgrounds interested in pursuing a Foreign Service career. The Pickering Fellowship is named in honor of the six-time ambassador, one of the most distinguished American diplomats of all time, whose career culminated with an appointment as under secretary of State for political affairs. Last year, promotion boards recommended three former Pickering Fellows for advancement into the Senior Foreign Service, the first Pickerings to cross the SFS threshold.

Howard University created the Charles B. Rangel International Affairs Program to honor the New York congressman for his example of global leadership and for his longstanding support of efforts to show the world the diversity that is the strength of America.

Program alumni who make it through the entry-level years do well in the Foreign Service. However, the transition from fellow status to “officer” status can be challenging, which is why the Pickering and Rangel Fellows Association was established in 2010. PRFA creates a professional network and support system for program alumni as they begin navigating the State Department as FSOs. PRFA offers career counseling and mentoring, and hosts a speakers series featuring department principals, subject matter experts and thought leaders.

In addition, the association puts together brown-bag sessions on a variety of topics including career advancement, EERs, bidding, managing up and leadership. Unfortunately, there is a growing trend of Pickering and Rangel fellows leaving the Foreign Service after serving for only one or two years. This is something PRFA and the Bureau of Human Resources are examining, aiming to determine the cause and what, if anything, can be done to ameliorate it.

Building on Our Progress

Appearing in a 2014 PBS documentary titled “The Foreign Service: In Search of Diversity,” featured on the show To the Contrary, former Director General Linda Thomas-Greenfield said this: “It is important for the world to see the face of America and it is important that they understand we are a diverse society and that diversity is our strength.” The Foreign Service has made real progress toward that goal, but much more needs to be done to achieve it.

In terms of a way forward, the State Department needs to invest real thought and time into expanding retention efforts. Though overall attrition rates are low, if you look closely at “who” is leaving, it is largely women and minorities. Why? What is the department not doing to retain these individuals? Or, conversely, what are competing employers doing to attract them?

A starting point for determining the most targeted and responsive retention program would be to examine closely the exit interview information to determine if any trends emerge. The department should also focus on recruiting future FSOs at even younger ages and develop a mechanism to increase awareness of the international affairs arena—specifically Foreign Service careers as an option—for groups that historically have not gotten this exposure or the knowledge that this career path exists for them. State should consider utilizing nontraditional outreach that emphasizes direct engagement. 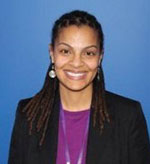 Lia Miller, an FSO since 2003, is a Pickering Graduate Fellowship alumna and the communications chair of the Pickering and Rangel Fellows Association. She currently works in the Bureau of Western Hemisphere Affairs. In Washington, she has also served in the Operations Center, the Public Affairs Bureau, the Office of Middle East Transitions and in the Office of Maghreb Affairs. She has served overseas in Tunisia, Nicaragua and Oman.