Welcome to the July-August edition of the FSJ, devoted to the important topic of the Foreign Service career. One of the achievements I am most proud of from my first year as AFSA president is creating capacity for AFSA to fulfill its role as the principal advocate for the long-term well-being of the Foreign Service.

As a union, AFSA advises and defends members who run into trouble and ensures systemwide fairness and due process. As a member organization, AFSA seeks to be responsive to member concerns, particularly widely shared concerns.

At the same time, as the professional association for the U.S. Foreign Service, AFSA must carve out resources to ensure that we play a forward-looking, strategic role as the voice of the Foreign Service.

We have taken the first steps toward that goal by creating the Professional Policy Issues directorate, headed by former FSO Maria Livingston. Even in its earliest stages, PPI has enabled AFSA to speak authoritatively about the shape and structure of our workforce.

After a dry spell of 14 years since the last State authorization bill was approved by Congress, this year three versions moved rapidly through the Senate and House with troubling provisions for, among other things, lateral entry into the Foreign Service.

AFSA quickly marshaled arguments against lateral entry. It is not true, as the bills posit, that mid-career professionals are somehow precluded from joining the Foreign Service. AFSA’s informal survey of the incoming classes we host here at headquarters tells us that upwards of a third of new entrants are in fact highly skilled mid-career professionals.

With 17,000 applicants each year for roughly 370 (or fewer) new entry-level officer (ELO) positions, the lateral-entry provision is manifestly unnecessary to attract top talent.

AFSA must carve out resources to ensure that we play a forward-looking, strategic role as the authoritative voice of the Foreign Service.

Further, lateral entry would, in fact, cause harm by adding to already full mid-ranks, exacerbating the current challenge: filling the soaring number of entry-level consular adjudicator positions. Hiring numbers are limited by budget constraints, and hiring unnecessary entrants at mid-levels costs positions at entry-level, where the need is great.

In a similar vein, AFSA is pleased to have played a constructive role in advocating do-no-harm solutions to the shortage of entry-level consular adjudicators. By fully embracing the Consular Fellows Program (which provides consular adjudicators on short-term appointments using the limited non-career appointment authority in the Foreign Service Act of 1980), we hope to work with the Director General to realize his goal of offering every entry-level officer an in-cone assignment.

We see encouraging early signs that this approach is bearing fruit. While members of the 185th A-100 class expressed concern that their career development would be impeded by years of delay—multiple consecutive consular tours, regardless of cone—before their first shot at in-cone service, members of the 186th class were upbeat about A-100 briefings describing the DG’s goal of one tour in cone for each ELO.

Be sure to read Andy Kelly’s Speaking Out piece for more on early career trade-offs—and join the discussion.

Finally, another note on joining the discussion: A big thank you to members who accepted my invitation to participate in a structured conversation about the Foreign Service. After meeting with chiefs of mission in March, we met with three groups of 12 FS-1 State FSOs in April before moving to FS-2s in May, followed by FS-3s in June.

After the summer transfer season, we will resume with sessions with State specialists and then hear from other constituencies (USAID, FCS, FAS, APHIS and BBG).

The response to this inreach effort has been overwhelmingly positive, and the insights we gain are invaluable as we shape positions informed by a nuanced understanding of member views. The sessions are also a real joy for me, a chance to engage with the extraordinary people who answered the call to serve. 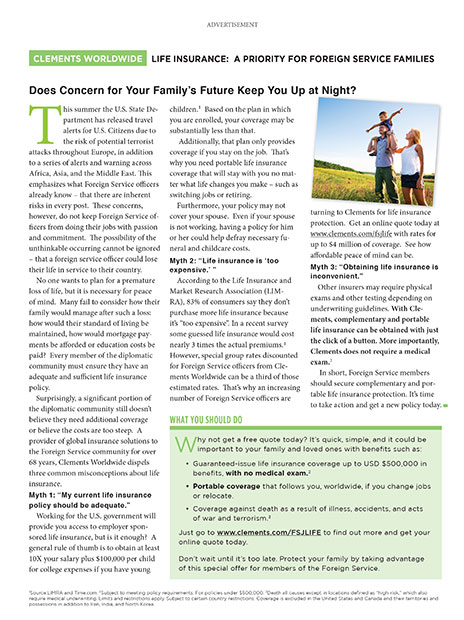