Turkeys Parade at the Border

The Foreign Service Journal > November 2016 > Turkeys Parade at the Border

In 1988, just before Thanksgiving, I woke up screaming in a luxury hotel in Kuwait City. For two days, we had been trying to leave Kuwait. Trying to get to Iraq, home as of two months earlier.

Travel was difficult for diplomats. We needed Ministry of Foreign Affairs approval to leave Baghdad. Approval took a week. Everything we did and said was observed by the government, even in private moments. Colleagues advised us to take regular trips out of country to decompress.

So we took a road trip to the closest international outpost, Kuwait City, 10 hours south of Baghdad. We took orders from colleagues for food and necessities. Since it was right before Thanksgiving, the orders included many Butterball turkeys.

The drive to Kuwait City was liberating. Our Suburban flew through the flat, khaki-colored desert along a well-maintained highway marked with clear signage in both Arabic and English. Within an hour of being welcomed to Kuwait, we were in a five-star hotel near the U.S. embassy.

We spent the weekend buying supplies. The turkeys came directly from the importer (and straight into ice chests), soda from the soda factory and long-life milk from the Danish Dairy. A Safeway, just like at home, filled other needs. Then we started back.

At Iraq customs, we hit a roadblock. The Iraqi customs officials wanted to search our vehicle. We had been instructed that a vehicle with diplomatic plates could not be searched or detained by its host country. Yet here we were, being told we could not re-enter Iraq without a thorough search of the Suburban.

Iraqis hate to say “no” (la). We spent a lot of time that morning in a small dark office, drinking many cups of sweet lemony chai from tiny glass cups, being told that of course we could drive to Baghdad, but our vehicle had to be searched first. We had no trouble saying “no,” telling them that our vehicle could not be searched.

They said everything but diplomatic pouches could be searched. We saw a European diplomat’s vehicle drive straight through, and we knew that we were being singled out. We asked to call our embassy, and we were told that the phone lines between the border and Baghdad were down. A call was impossible.

Finally, we returned to Kuwait. From the border, we called Embassy Baghdad and were directed back to Kuwait City, where we unloaded our perishables for safekeeping by the defense attaché, whose counterpart in Baghdad had ordered many of the turkeys. We were to try again the next day.

We followed the Iraqis’ lead. Everything in the vehicle except passports, water and lunch, was sealed into diplomatic pouches. Big diplomatic pouches: some large enough to house four ice chests or a St. Bernard or two.

We also learned that our mission suspected we were being scapegoated because the United States had just denied a visa to Palestine Liberation Organization leader Yasser Arafat, who had been invited to talk at the United Nations. We were the first American diplomats to try to cross the border since that denial.

At the Iraqi crossing we pointed to the sealed diplomatic pouches. The customs officials objected. Making gestures the size of a briefcase, one official said, “This is a diplomatic pouch.”

Soon we were swimming in chai again. As we drank and drank, we saw two “suits”—MFA officials, we surmised—walk up to observe. We returned to Kuwait, and the Kuwaiti officials were amused.

The defense attaché took back the groceries, and we went back to the luxury hotel, where I woke the next morning screaming. We were told to sit tight while things were worked out between Embassy Baghdad and the MFA.

Finally, our entry was arranged. The diplomatic pouches were gone. The Iraqis had agreed that they would not search our vehicle, as long as they were allowed to search everything in it.

We unloaded the entire vehicle. Like a parade, a dozen turkey-filled ice chests stood in a row on the dusty pavement followed by cases of long-life milk and Pepsi. After a pro forma inspection, we reloaded those American birds for their final journey.

Then we drove home, very much pawns in a political situation over which we had no control. The turkeys made it to Baghdad for Thanksgiving dinner, and I wouldn’t be surprised if the very men who ordered us detained were invited. 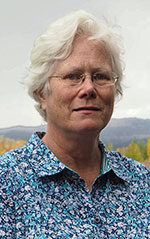 Victoria Hess lived in Baghdad from September 1988 until Iraq invaded Kuwait in August of 1990. Her husband was a general services officer, and Victoria kept the commissary stocked with groceries from Kuwait and alcohol from Europe.