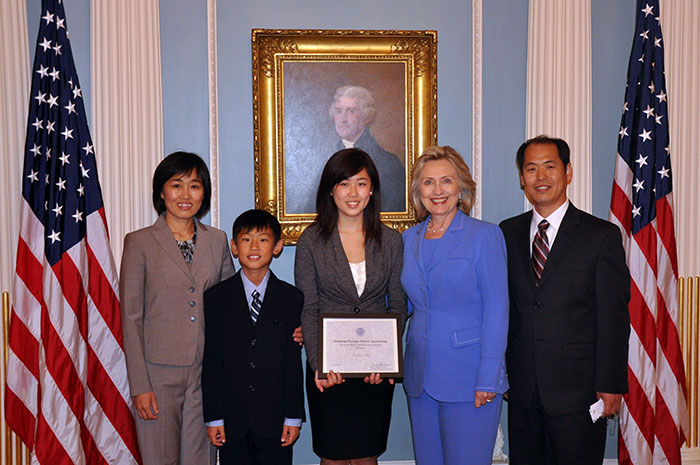 Evaline Bai and family with Secretary of State Hillary Clinton

According to U.N. reports, over 2,400 Afghan civilians died of war-related violence in 2009. This figure excludes the deaths caused by the poverty, famine, and economic deterioration that resulted from war-related violence. The greatest hope for Afghanistan is manifested in the form of the American Foreign Service, which, through a civilian-military effort, has pledged to help Afghans gain the resources and establish the institutions necessary for a stable and successful future. This undertaking in Afghanistan will prove to be one of the greatest challenges to the Foreign Service in the 21st century, as it must confront the realities of a failing state while combating terrorism.

Amid the tension of war, Secretary of State Hilary Clinton affirms that “military force alone would not be successful [in Afghanistan]”. It is therefore up to the Foreign Service to facilitate the change needed to improve the lives of the Afghan people. Foreign Service members, however, face a barrage of challenges at home and abroad. Corruption is rampant as Afghanistan ranks 176th out of 179 countries in Transparency International’s Corruption Perceptions Index for 2008. Afghanistan is easily destabilized by the influences of regional powers, and since the fall of the Taliban in 2001, still lacks the economic capacity to establish institutions and enhance its standard of living. The health and human rights status of Afghans remains among the worst in the world, with one out of every five Afghan children dead before the age of five.

The American Foreign Service is focused on the democratization of Afghanistan. Since the establishment of an Afghani constitution, it is imperative that Foreign Service members closely monitor the growth of democracy and foster political development within a country entrenched in Sharia law. The first Afghan-held presidential election on August 20th, 2009 was characterized by widespread fraud and led to a run-off election in November where Hamid Karzai was re-elected on equally suspicious terms. With credibility damaged, the American Foreign Service must increase pressure upon President Karzai to establish a framework for civil society that “emphasizes democratic principles through a rule of law and creates accountable and transparent forms of government”. Under the U.S. Agency for International Development (USAID), local Afghan officials are trained in the management of human and financial resources and ethics in government. Although democratization is a principle objective, the Foreign Service should demonstrate cultural sensitivity by integrating aspects of existing Sharia law into the Karzai government, in order to establish a stable middle-ground.

It is essential that American diplomats establish effective dialogue with the nations surrounding Afghanistan in order to prevent the destabilizing effects of countries such as Pakistan, Iran, Russia, and Saudi Arabia. According to J. Alexander Their, the director for Afghanistan and Pakistan at the U.S. Institute of Peace, “an agreement among regional actors to promote mutual noninterference in Afghanistan’s internal affairs would be necessary to secure the peace." Pakistan is the most significant of regional powers, acting as the Taliban’s last sanctuary, but also as the primary supply route for the International Security Assistance Force (ISAF) in its efforts to combat the insurgency. The primary role of the Foreign Service overseas is to promote U.S. objectives through good relations with foreign governments. Therefore, the U.S.-Pakistan relationship is vital in the stabilization of South Asia and in the fight against violent extremism. During the U.S.-Pakistan strategic dialogue in March, Pakistani Foreign Minister Makhdoom Shah Mahmood Qureshi affirmed Pakistan’s commitment “to doing its part to facilitate the world’s community effort for peace and stability in Afghanistan [and hopes that] the United States will maintain its constructive engagement to encourage this process”. Through dialogue and diplomacy, Foreign Service officers must organize multi-lateral efforts to counter terrorism and promote stability in South Asia and provide for a more secure America.

With 80 percent of Afghanis involved in farming or herding, the U.S. Department of Agriculture is dedicated to helping Afghanistan revitalize economic markets. This is achieved through initiatives such as the Food for Progress Program which provides Afghanistan with a grant towards agricultural reconstruction. Secretary Tom Vilsack “recognizes the importance of Afghanistan's agricultural economy in creating jobs, helping the nation achieve food self-sufficiency, and drawing insurgents off of the battlefield”. The Foreign Agricultural Service (FAS) needs to partner with Afghan ministry experts, local officials and entrepreneurs to initiate agricultural reconstruction that will provide Afghans with a viable means of living.

Illegal opium production dominates the economy and is a major impediment to achieving political stability and sustainable development. In the last year FAS members helped farmers revert numerous hectares of illicit poppy fields to crops such as wheat and apples. USAID works to provide Afghanistan with reliable infrastructure and energy networks vital for economic growth. As the Foreign Service works to provide more Afghans with a basic means of subsistence, the country will come closer towards economic sustainability. Economic stability serves as a catalyst towards social change, the main beneficiaries being the citizens of Afghanistan. USAID has worked to repair the education system in Afghanistan and allowed access to healthcare for over 85 percent of the population. The Foreign Service proves an unfailing commitment towards bettering humanity while exemplifying the U.S. as a leader in humanitarian assistance.

On March 28th, President Obama made a surprise visit to Bagram Air Field where he proclaimed, “I want every American serving in Afghanistan, military or civilian, to know...your services are absolutely necessary, absolutely essential to America’s safety and security”. Parallel to the war effort in Afghanistan, the men and women of the American Foreign Service carry out vital reconstruction efforts that improve the lives of millions of Afghans and counter the threat of terrorism. Through the vehement efforts of the American Foreign Service in the 21st century, Afghanistan is making an optimistic progression towards peace, stability, and sustainable development.