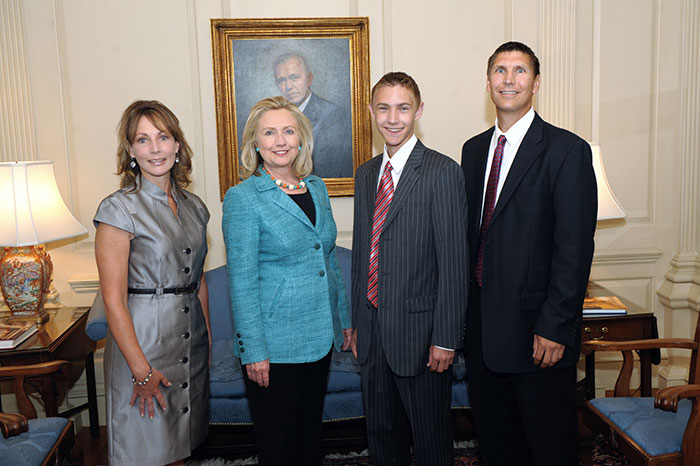 Secretary of State Hillary Clinton with Grant Jirka and his parents

“America and China have arrived at a critical juncture, a time when the choices we make – both big and small – will shape the trajectory of this relationship” said my boss, U.S. Secretary of State, Hillary Clinton, when she gave a speech regarding the relations between the U.S. and China (Clinton “Inaugural”). As the newly appointed U.S. Ambassador to China, I have my work cut out for me. “China’s association with the U.S. is recognized as the world’s most important bilateral match-up” (Chao A1). Our countries have different cultures and different ways of life. We need to accept our differences and use them to strengthen our relationships. It is crucial to have diplomats bridge this gap. Foreign Service employees play a critical role in this process. They are “…the first line of defense…” in helping carryout foreign policy (Dorman 2). We have a great team assembled to handle this task – from those in the Executive Branch above me and to those who work under my direction here in the New Embassy Compound in Beijing, the Consulates and Virtual Presence Posts around the country. We all work together for the common goal of improving relations with our hosts, the diplomats and citizens of China.

I have a roundtable meeting today with key personnel to outline the major challenges ahead of us this year. The Deputy Chief of Mission, Dr. Robert Wang, will assist during the meeting. He needs to be abreast of all embassy policies. He is the charge d’ affaires when I am out of the country. Also attending the meeting will be the five Consul Generals, and other officials: the U.S. Agency for International Development Mission Director (USAID), the Political, Economic, Commercial, Public Affairs, Labor and Environmental Officers along with the Junior Officer. All of these people need to be keenly aware of every aspect of our foreign policy. It is imperative that we speak uniformly when referring to our policies.

My first priority is to address the ongoing problem of China’s fixed currency. The Economic Officer and his team need to encourage China’s leaders to allow the Renminbi to appreciate. President Obama got the ball rolling for us when he met with President Hu Jintao earlier this year. An increase in the Renminbi would impact many aspects of our bilateral relationship. It would help the U.S. by improving the trade deficit and bring jobs back to America. It would help China’s human rights issues by increasing the purchasing power of the average laborer in China. “China has been the fastest growing market for U.S. exports. These exports have risen 330% over the last ten years” (Zhang). The Labor Officer will give us input on how this will affect wages and working conditions throughout the country. “The Labor Officer is one of the people in the embassy who bridges the political and economic world…” (Dorman 34). We need to stress how currency fluctuations will help the Chinese people.

I will call on the Economic & Commercial Officers to address the problem with intellectual property rights. This has become a major concern of U.S. based companies. “China was the number one source of counterfeit products that were seized at the United States border last year” (“Intellectual Property”). “This accounts for a $300 billion annual loss to legitimate producers” (Shenkar 94). The Economic Officer and I will work closely with Chinese officials on the issue of counterfeiting. We will set a plan in motion with the Chinese government on merging the Patent, Trademark and Copyright Offices under one authority. In 1998, China established the State Intellectual Property Office (SIPO) which was supposed to merge those offices but has yet to do so. “According to one copyright industry association, the piracy rate remains one of the highest in the world (over 90 percent) and U.S. companies lose over one billion dollars in legitimate business each year to piracy” (“Intellectual Property”). Stealing and counterfeiting are very serious crimes. I will request a special envoy to come up with a soft power plan on this delicate issue.

Current globalization trends continue to pull our world closer together. The internet is a global tool which should be available and uncensored to everyone. China once used the Great Wall to isolate its people from the rest of the world. Currently, China uses the “Great Firewall” to isolate its internet users from outside influences. China prevents its citizens from viewing many websites as a form of censorship. Ronald Reagan once said while standing in front of the Brandenburg Gate in West Berlin, “Mr. Gorbachev, tear down this wall!” (Reagan). It is now time for us to say, “Mr. Hu Jintao, tear down this firewall!”

Any world superpower will not survive long when it suppresses its people. Hillary Clinton said in her speech on U.S. and China’s relations, “…We have seen nation after nation, from South Korea to Indonesia to many parts of the world, where once they realize that denying people the right to express their discontent can easily create more unrest…” (Clinton “Inaugural”). I will initiate a special attaché to confront this dilemma.

I found out first hand that the people of China want freedoms. As a 16 year old high school student, I traveled to China on an exchange program (National Security Language Initiative) sponsored by the U.S. Department of State. I was able to speak to many Chinese citizens about censorship. They said the government has too many restrictions on what they can and cannot do.

The last item for the meeting will be to increase cultural awareness between our countries. I want to extend a hand to our host country and allow them the opportunity to experience our culture by increasing foreign exchanges. I propose to bring American citizens to the embassy in Beijing to meet with the Chinese people on a personal level. I had the opportunity to present an American movie to Chinese university students while in China on an exchange trip in 2009. I spoke to the students and they asked questions about life as an American teenager. This was a life changing experience for all of us. I chose to present the movie, “Remember the Titans”. The movie was about racial bias and integration. Judging from questions I received about the movie, this was a new concept to many of the students. I planted a seed of equality in them, which I hope will grow with them in the years to come.

As the U.S. Ambassador to China, it is my job to solve some of the major issues that confront the U.S. and China: The valuation of the Renminbi, protection of intellectual property rights, counterfeiting, human rights, environmental concerns, censorship, and improving the trade deficit. “We must use what has been called smart power: the full range of tools at our disposal – diplomatic, economic, military, political, legal, and cultural – picking the right tool, or combination of tools for each situation” (Clinton “American”). China has been known as an emerging superpower over the last ten years. Times are changing. It is no longer emerging – it has arrived….BEEP, BEEP, BEEP…..Oh no! That’s my alarm clock…. This was all a dream, or was it? It felt so real. I was working with some of the world’s most intellectual and politically savvy people. Well, it looks like Ambassador Huntsman still has his job. Maybe someday I will be able to live the dream as a diplomat in the U.S. Foreign Service.

Shenkar, Oded. “The Chinese Century: The Rising Chinese Economy and its Impact on the Global Economy, the Balance of Power, and Your Job.” New Jersey: Wharton, 2006.