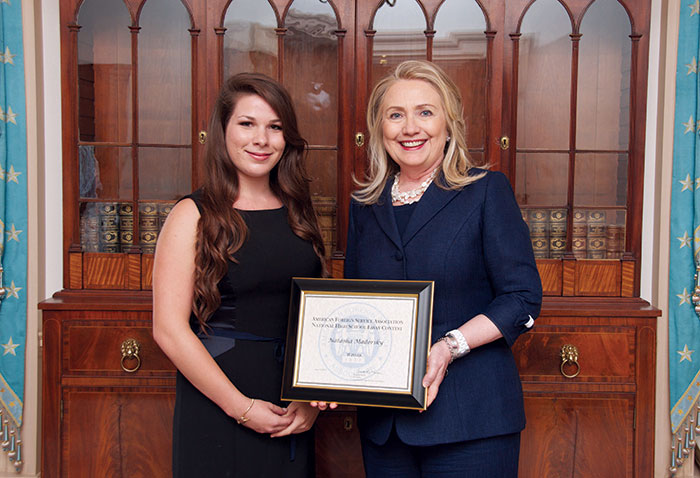 “My life’s a curse,” Mary Nyekueh Ley told the New York Times in February 2012. Mary is from South Sudan, but she currently lives just north of the border in Omdurman, Sudan. She has lost one husband in battle, and two children to diarrhea. Mary struggles to feed her four remaining children by illegally selling home-brewed alcohol, “a serious crime in Islamist Sudan that has landed her in jail more than 10 times and earned her dozens of lashes” (Gettleman). Still, she has found life in the North preferable to life in her ancestral home in South Sudan which has “no paved roads or electricity, few wells and few schools,” a place where “a 15-year-old girl has a better chance of dying in childbirth than of finishing school” (Gettleman). Mary’s story is commonplace in South Sudan, where millions are illiterate, impoverished, and lack the skills and resources to improve their lives. As a U.S. Foreign Service employee stationed in Juba, South Sudan, I am confronted daily with the tragedy of lost human potential and the challenge of building a sustainable infrastructure from the ground up.

Our mission in the Republic of South Sudan seeks to promote stability, inclusion, efficiency, and peace within the new country. Since the state was founded in July 2011, the U.S. has made numerous commitments to South Sudan in the process of creating a lasting partnership. President Obama designated South Sudan as a beneficiary of the Generalized System of Preferences, and the Office of the U.S. Trade Representative is considering South Sudan’s eligibility under the African Growth and Opportunity Act. These programs will connect South Sudan to U.S. and international markets, thereby limiting its economic reliance on Sudan. Another priority for the Foreign Service in Juba is the health of South Sudan’s people; USAID is part of a collaborative effort to support and expand South Sudan’s Basic Package of Health Services, a first step in ensuring that women like Mary Ley will never again lose loved ones to entirely preventable diseases.

The recent violence in the Southern Kordofan and Blue Nile states of Sudan is a chief source of tension between Sudan and South Sudan. The U.S. demanded that South Sudan end its military support for the Sudan People’s Liberation Movement-Northern Sector, and our embassy is keeping close watch on the situation to ensure that our demands are met. Another key issue is oil revenue management. South Sudan contains over seventy percent of the oil once shared with the North, and the country must now determine whether this oil will benefit the people of South Sudan, or whether it will be exploited by outsiders, as happened in Nigeria. Our team in Juba and our associates in Washington intend to work closely with the South Sudanese Ministry of Petroleum and Mining to ensure that the benefits of oil development reach the people of South Sudan.

These issues, and many more, set the agenda for the International Engagement Conference for South Sudan, which I attended this past December in Washington. Throughout two days, key players in South Sudan’s future discussed the nation’s achievements and challenges, and created a roadmap and international support system for the critical months ahead. The official outcomes report from the conference lists South Sudan’s commitments, and the specific issue areas that partner nations will monitor. The U.S. was charged with providing aid and guidance in the areas of agriculture and international investment. Since the conference, we have worked to address these issues both in our policy efforts and our field work.

Though South Sudan is rich in natural resources including fertile agricultural land, this new nation maintains a subsistence economy with one of the highest poverty rates in the world and 4.7 million people facing starvation. George Okeh, the head of the Food and Agriculture Organization office in South Sudan notes, “In order to restore and sustain food and nutrition security in South Sudan, we need to break the cycle of increasing hunger and poverty. We can do this by helping people to resume the farming, livestock, and other activities that support their livelihoods” (UN). Our embassy has forged partnerships with regional and international organizations in an effort to improve agricultural efficiency and create a sound agricultural infrastructure. I intend to complement this approach with the creation of regional programs to train individuals in innovative farming and management techniques.

In order to encourage international investment in Sudan, The U.S. Office of Foreign Assets Control has issued two licenses that authorize “activities and transactions relating to the petroleum and petrochemical industries in the Republic of South Sudan” and “the transshipment of goods, technology, and services through Sudan to and from South Sudan.” (White House). The U.S. private sector has responded as well, with the Overseas Private Investment Corporation (OPIC) intending to open for business in South Sudan’s infrastructural and agricultural sectors. Our diplomatic team in Juba must stay in close contact with Washington colleagues and leaders of OPIC to ensure that their policies are being carried out smoothly.

The involvement of these powerful institutions and foreign governments is critical in forming a new state. However, just as fundamental is the participation of local citizens and grassroots organizations in the nation-building process. Foreign service officers must serve as the liaison between these two groups, ensuring that comprehensive policies truly reflect the needs of South Sudan’s diverse population. Thus far, much of our approach has been top-down, constructing policies to fix core issues within South Sudan’s major industries. I hope to lead our team in a bottom-up approach to development as well, making sure that we keep the stories of real people like Mary Ley at the forefronts of our minds and hearts.

Pursuant to the country’s inclusion in both the U.S. African Women’s Entrepreneurship Program and the National Action Plan on Women Peace and Security, our embassy is working to engage with South Sudanese women on a grassroots level. Micro-financing programs are a promising option for enterprising South Sudanese like Mary; our embassy could be instrumental in helping local individuals form associations, perhaps modeled after the wildly successful Self- Help Groups in India or Grameen Bank in Bangladesh. As Nicholas Kristof noted in his book, Half the Sky: Turning Oppression into Opportunity for Women Worldwide, "Micro-finance has done more to bolster the status of women, and to protect them from abuse, than any laws could accomplish” (Kristof 187).

Studies repeatedly show that education is the most effective and reliable means of economic development, especially in impoverished nations. Our embassy must make education a central part of our mission in South Sudan, reaching out to local leaders across the country and providing them with the support they need to build and maintain quality schools for their children. Success in this endeavor will mean that Mary Ley’s children, and millions like them, will have the opportunity to break the oppressive bonds of poverty and build a brighter future for themselves.

U.S. Secretary of State Hillary Clinton said of South Sudan, “We will work with you, we will stand with you, we will support you” (Clinton). Indeed, the challenge that lies ahead for the American Foreign Service in South Sudan requires an unwavering commitment to our highest humanitarian ideals, along with a sophisticated appreciation of a culture that exists in a tenuous balance with multiple forces around it. A long-term vision, willingness to work hard, flexibility and sensitivity to the needs of the people will be the foundation we can offer South Sudan as it works toward a self-sustaining prosperity.

*The White House, Office of the Press Secretary. "Statement of President Barack Obama Recognition of the Republic of South Sudan." The White House. 09 July 2011. Web. 24 Mar. 2012.