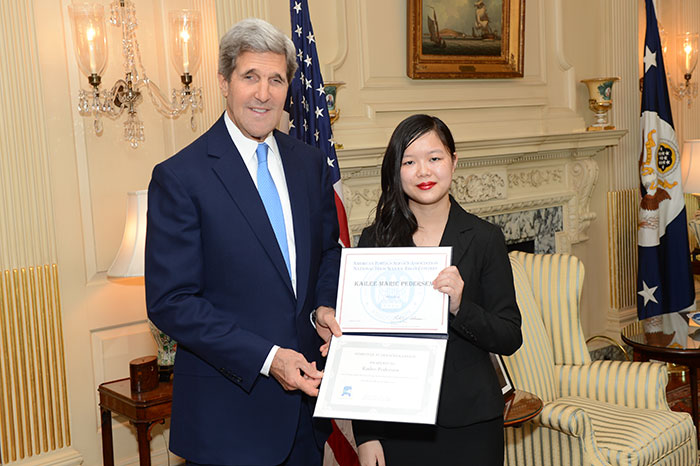 “This is Burma, and it will be quite unlike any land you know about,” asserted Rudyard Kipling in his 1899 book Letters of Travel. A British colony until 1948, Burma has been under the control of a military junta since the 1962 establishment of a one-party state by General Ne Win. After the government refused to honor the 1990 democratic elections, the United States and Burma’s Asian neighbors have economically sanctioned the country. The internal struggle between democratic reform and military authority is most poignantly epitomized by the plight of Aung San Suu Kyi. As the leader of the National League for Democracy, Aung San Suu Kyi has been repeatedly put under house arrest, spending fifteen years as a political prisoner in her home country. In 2007, dictator Than Shwe violently suppressed a peaceful antigovernment protest led by Buddhist monks, straining the bilateral relationship with the United States. However, with the recent transfer of power to Than Shwe’s protégé Thein Sein, Burma has been witness to surprising amounts of political reform. With the normalization of Burmese-American diplomatic relations leading to a new posting as ambassador to Burma, I must continue to promote democratization and political liberalization in a country that has long suffered under military rule.

My top priority is to support “a peaceful, prosperous, and democratic Burma” (U.S. Department of State). Politically, Burma has experienced a wave of reforms after the ascension of Thein Sein to the presidency. Notably, they have released political prisoner Aung San Suu Kyi, widely regarded as the most vocal proponent of democracy in Burma. After the democratic by-elections of 2012 where the National League of Democracy won a landslide victory, the United States normalized diplomatic relations with Burma. Despite this, Burma is not yet a fully democratic state, as the former junta’s political party, the Union Solidarity and Development Party, still controls most of the parliamentary seats. Advancing United States policy in the country is predicated upon Burma accepting the results of the 1990 election, where the National League of Democracy swept the polls. The establishment of a civilian government, and not merely a partially civilian government (as it is now under Thein Sein), persists as a major priority.

One aspect of my democratization strategy is economic. By incentivizing democratization, economic pressure can be applied to the regime more effectively than past strategic sanctioning. In consultation with my Economic Officer, I have come to the conclusion that removal of sanctions “tied to measurable and verifiable progress towards the implementation of an agreed set of political reforms” (Haacke 101) will allow Burma’s economy to grow, while also promoting democracy as a valid economic strategy. Increased foreign investment will create more jobs in a country where half of the population is below the poverty line. With the loosening of sanctions, foreign investment increased to $20 billion in the years 2010-2011. According to my Commercial Officer, a relaxing of import sanctions on Burma would benefit the United States economy, for we would gain access to Burma’s “[v]ast reserves of natural resources, including oil and gas, rice, timber, and precious gems” (Klein). Additionally, the United States can use economic policy to foster infrastructural improvements and sustained economic development in Burma by investing in irrigation and education. To invest in the Burmese economy is to invest in “the underpinnings of sustainable democracy” (Holliday 91). I will leave my Commercial Officer in charge of developing United States economic interests in Burma. This in turn will strengthen our newly reinstated bilateral relationship, hopefully leading to further open dialogue with the Burmese government.

Fostering the development of civil society will hasten the process of democratization. Civil society has been stunted by strong censorship under the military regime, as well as by its lack of independent judiciary and restriction of political pluralism. A study by the OpenNet Initiative in 2005 discovered that Burma “implements one of the world's most restrictive regimes of Internet control” (“Internet Filtering”). However, in 2012 it was found that Burma “has demonstrated a marked decrease in filtering of news and oppositional political content” (Poetranto). Opposition to media censorship have even appeared within the bureaucracy itself, including from Tint Swe, the director of the Press Scrutiny and Registration Department. Encouraging freedom of the press and the release of political prisoners will assist in creating political autonomy for the Burmese people. In the words of Aung San Suu Kyi, “The best way to help Burma is to empower the people of Burma … The best way people can help us is to encourage us to help ourselves” (qtd. in Krisher). The Public Affairs Officer, USAID Democracy Officer and I will coordinate our efforts to bring positivity to the bilateral relationship, as well as pursuing a more open political climate. Due to its colonial history, the Burmese government mistrusts external interference. Therefore, until a grassroots power base outside of military authority is formed, there can be no regime change in Burma.

Another significant obstacle in creating a peaceful, prosperous, and democratic Burma is its long governmental history of human rights violations. Although Burma created a nationwide human rights commission in 2011, its efficacy and willingness to challenge the existing government has been questioned by the United Nations. I will encourage Burma to allow an outside inquiry to be launched inside the country, which will help alleviate concerns of continuing human rights violations, as well as improve relations abroad. Aided by my Political Officer, I will remind the Burmese government of the United States’ policy toward human rights violations, and endorse the political empowerment of ethnic minorities. Most alarming to me has been the recent violence toward Muslims in the western state of Rakhine in April of 2013. In addition, the Rohingya peoples along the Bangladesh border still remain a stateless and unofficially recognized minority. And although Thein Sein has signed ceasefire agreements with several armed ethnic minority groups, there are still doubts as to whether they are being properly honored. The Regional Security Officer and I will remain vigilant to ensure the safety of my staff and the Foreign Service Nationals working with us in these troubled times. I will endorse recognition of the stateless Rohingya peoples, as well as further dialogue on cultural diversity in Burma. It is only through the reconciliation of a multiethnic state that Burma can truly begin to work toward our shared goal of democracy.

The pursuit of a democratic Burma consumes much of my work in the country. In spite of these difficulties, I remain hopeful. The recent liberalization of the regime, including their tolerance of opposition parties in the 2012 by-elections, indicates that a transfer of power to a stable civilian government is indeed possible. Nevertheless, Burma continues to be a country fraught with human rights violations, violent ethnic conflict, and oft-strained bilateral relations. Even so, I continue to find inspiration in Aung San Suu Kyi’s declaration that “[t]he struggle for democracy and human rights in Burma is a struggle for life and dignity” (qtd. in Aglionby). Kipling was startlingly accurate in his 1899 prediction that Burma was quite unlike any other country. Indeed, it is a country of paradoxes: somewhat democratic yet controlled by a military, incredibly picturesque yet torn apart by ethnic violence. As Burma begins to evolve from a fledgling, partially civilian government, the United States can offer more than merely words— but also a vision of mutual economic development, united by our democratic goals.

Dorman, Shawn. Inside a US embassy: How the foreign service works for America. Washington, DC: American Foreign Service Association, 2003.

*Steinberg, David I. Burma/Myanmar: What everyone needs to know. Oxford: Oxford UP, 2010.