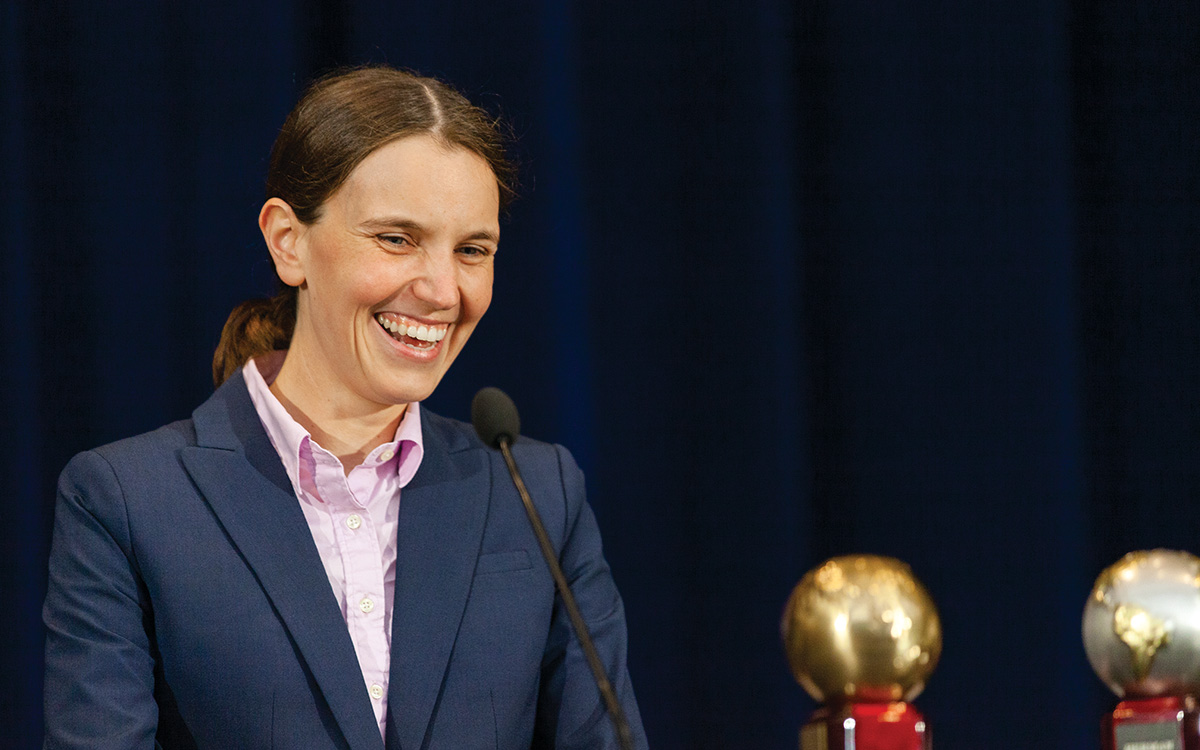 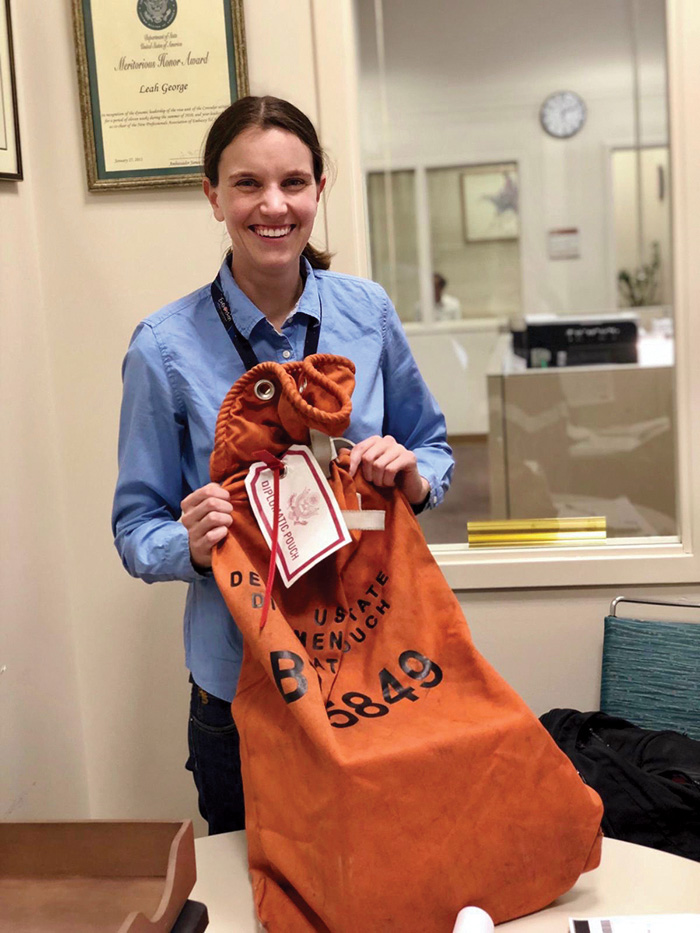 Anna Boulos in Tijuana in early 2019.
Courtesy of Anna Boulos

While serving in Tijuana, Consular Officer Anna Boulos challenged Mission Mexico’s consular management over policies and practices that exposed adjudicators to an increased number of Visa Lookout Accountability violations, which, in turn, harmed their chances for tenure and promotion.

Consular officers are trained to carefully use the Visa Lookout system and to avoid VLA violations, which occur when an officer fails to properly resolve derogatory information about a visa candidate before issuing a visa. They work hard to avoid issuing a visa to an applicant ineligible under the Immigration and Nationality Act.

Careful adjudications are vital, but adjudication can be more difficult when considering the complex immigration histories of those who have held H-2 visas for seasonal work and have crossed the U.S.-Mexico border for many years in connection with that work. H-2 visas allow individuals to work temporarily in the United States in certain sectors, including the agricultural industry. Because of the importance of timely H-2 visa issuance to Congress and the White House, Mission Mexico’s consular management prioritized processing H-2 visas quickly. In 2018, Mission Mexico performed 13.8 percent of all adjudications worldwide in all visa categories, but its officers accounted for more than 30 percent of the VLA violations recorded that year.

Ms. Boulos challenged Mission Mexico’s centralized consular management procedures in a letter to AFSA that was signed by 60 current and former Mission Mexico entry-level adjudicators. She highlighted the perception that Mission Mexico prioritized visa processing speed over critical assessment and therefore, for example, had adjudicators interviewing five to 10 H-2 applicants at once. Adjudicators were instructed to issue H-2 renewals without an interview if derogatory information had been previously addressed. This policy violated regulations and exposed officers to VLA violations if the original adjudicator made a mistake.

Ms. Boulos requested AFSA’s assistance to advocate for reforms to VLA procedures within the Visa Office at post and to advocate for improved disciplinary procedures for officers who received VLA violations with the Office of Employee Relations’ conduct, suitability and discipline division in Washington, D.C.

Ms. Boulos worked with AFSA to guide its discussions with the Visa Office in the Bureau of Consular Affairs, explaining that 2018 revisions to the Foreign Affairs Manual (9 FAM 307) unfairly broadened the scope of VLA violations. She raised the profile of the problem, explaining that the Visa Office was issuing VLA violations in record numbers to Mexico adjudicators, and that many of those individuals’ careers were placed on hold because they were following the mission’s erroneous guidance.

As a result of Ms. Boulos and AFSA’s efforts, the Consular Bureau’s Visa Office announced significant changes to VLA procedures in 9 FAM 307. These changes have benefited all officers who adjudicated H-2 visas in Mexico, as well as all visa adjudicators worldwide. Today, FSOs know the Visa Office is more fairly conducting its VLA violation process. But Ms. Boulos continues to advocate for dozens of officers held up in the disciplinary process for old violations.

“Moving forward, I hope our story reminds everyone that we have a voice, and we should use it to speak up in areas big and small,” Ms. Boulos said Oct. 16 on receiving her award. “For me, dissent is the opposite of cynicism; dissent is forward-looking and optimistic. We didn’t dissent just because the department is imperfect, but because we cared and believed the department could be better. And even though we’re still facing pushback from HR, I remain optimistic. So, I ask anyone who sees other imperfections, don’t be cynical. Dissent. And count me in when you do.”

Anna Boulos received a bachelor’s degree in international relations from Tufts University, and a master’s degree in public policy from the Sanford School of Public Policy at Duke University. She joined the State Department in 2013. 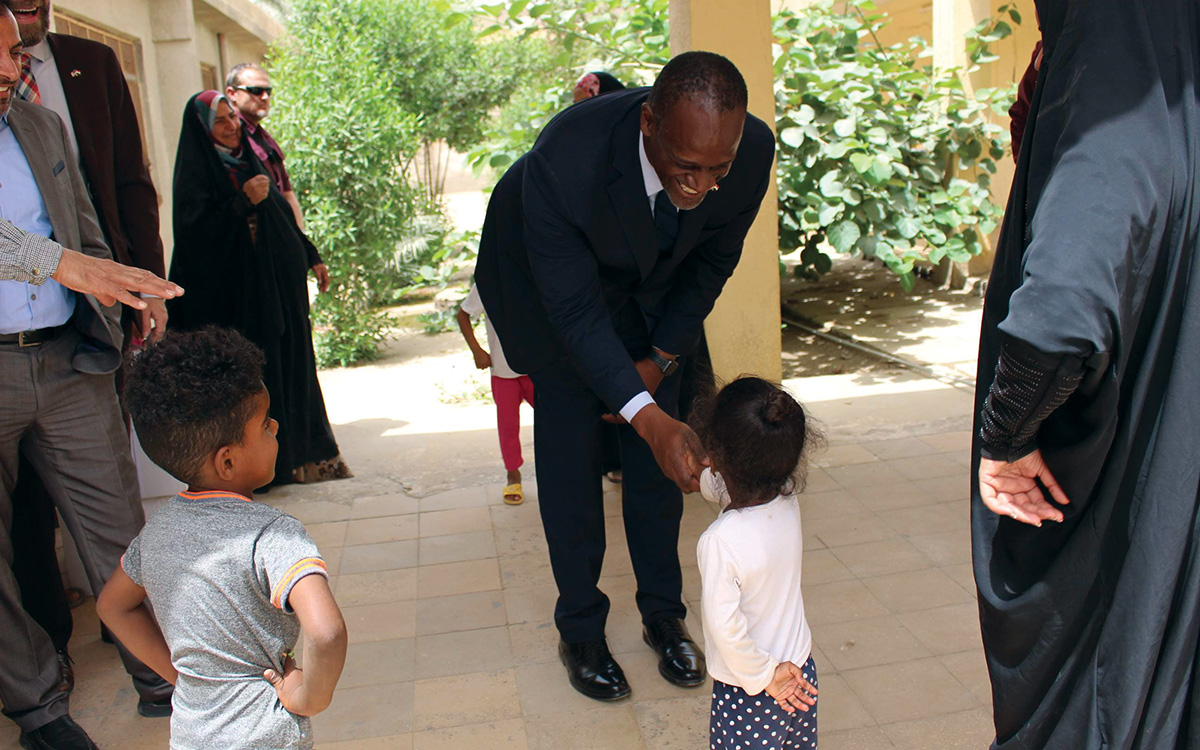 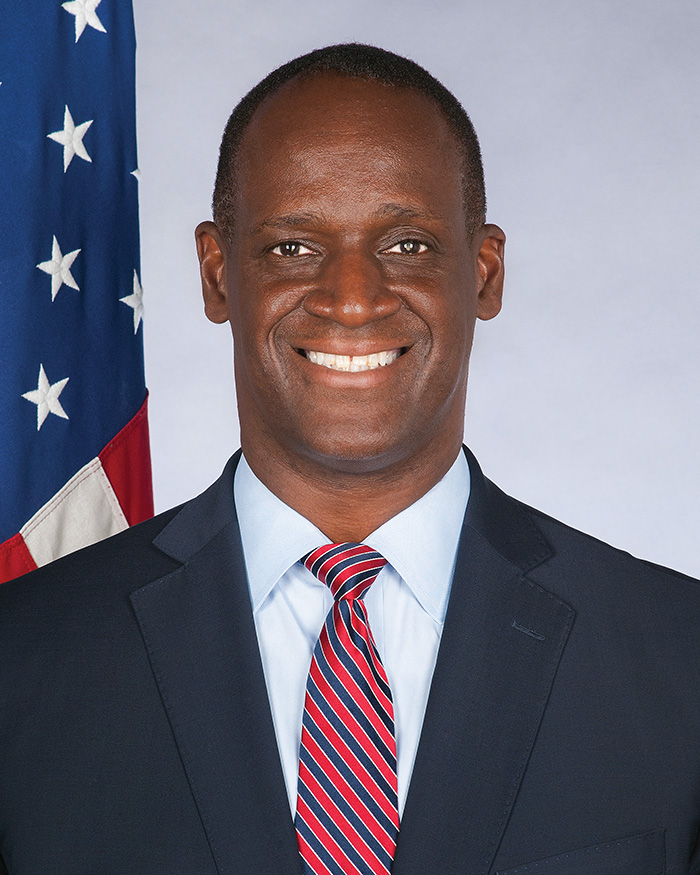 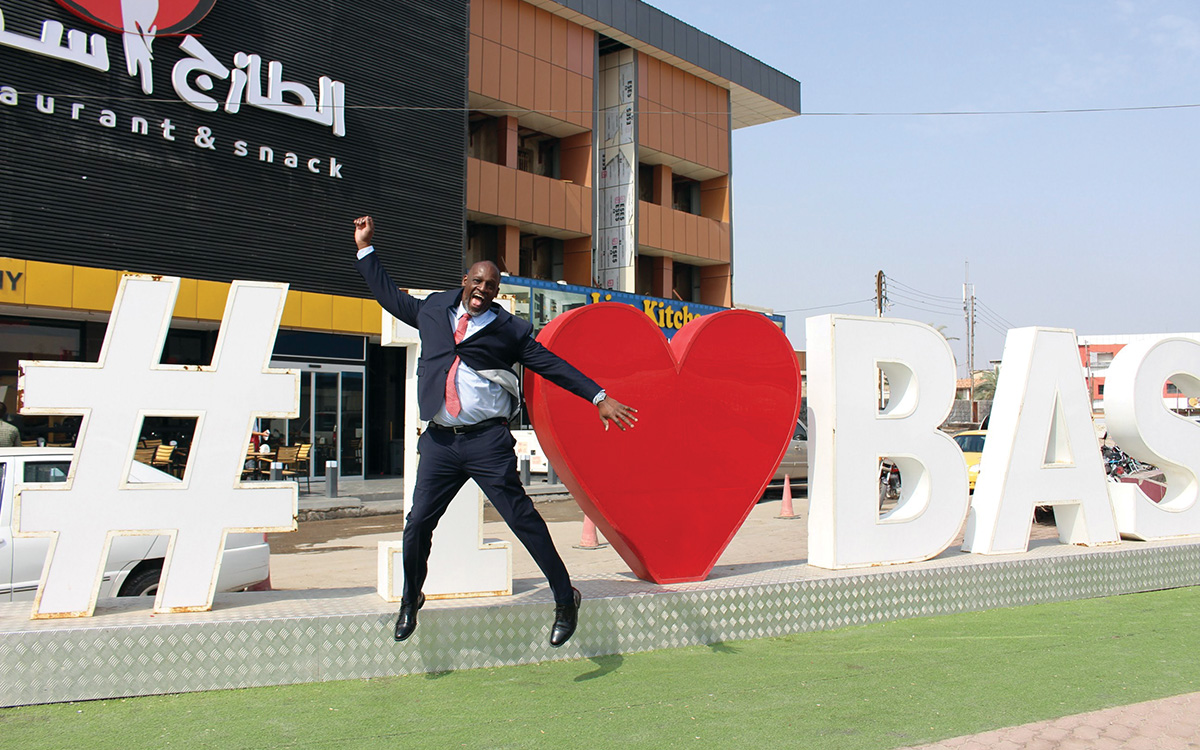 As Basrah consul general, Timmy Davis embodied the best traditions of the Foreign Service and constructive dissent. During the lead-up to the September 2018 decision to suspend operations and evacuate the consulate and its nearly 1,000-member staff, and throughout the subsequent evacuation itself, Consul General Davis showed courage and conviction in presenting the case for the continued operation of U.S. Consulate Basrah. For speaking out on this issue, he was selected as a recipient of the 2019 William R. Rivkin Award.

CG Davis made the conscious decision to lay out his case directly, rather than through the Dissent Channel, in a series of sensitive discussions that began with the ambassador and the under secretary of State for political affairs and concluded with several direct discussions with the Secretary of State. He made the strongest case possible to maintain a presence in Southern Iraq’s Shia heartland and follow ample security precautions to prevent harm to consulate personnel.

When the decision was made to close the consulate over CG Davis’ dissent, he dutifully carried out the order, showing the highest level of efficiency in moving out all personnel and equipment within the Secretary’s three-week deadline, while seeing to the needs of his disrupted team.

CG Davis has devoted years to southern Iraq, serving previous tours both with the State Department and before that as a Marine during the early days of the Iraq War. Under his leadership, the consulate had gone from a marginal player limited by security restrictions to a major and welcomed presence in the region.

While security concerns were real, so were the consulate’s precautions. Under CG Davis, Consulate Basrah maintained a robust operation that included highly trained force protection professionals, sophisticated early warning systems and a significant security force to secure the compound.

In one of his final actions, CG Davis issued a cable—“Basrah 223: Staying Engaged in the Shia South”—explaining the importance of continued U.S. engagement in that region to understand and influence national politics, protect U.S. economic interests in the oil sector and elsewhere, and serve as a counterweight to Iran’s often unwelcome influence.

“I never imagined that I would receive the award, but I do know that I have long believed that leadership means little without action,” CG Davis said at the Oct. 16 awards ceremony. “In my case, I could not have moved forward in my career without standing up for what most mattered to me as a leader: taking care of the people I worked with and speaking clearly about the sacrifices we, Foreign Service and Civil Service personnel, are willing to make for our country.”

Timmy Davis is from New Orleans and attended the University of Alabama. He served in the United States Marine Corps for nine years before joining the Foreign Service as a political officer. His overseas tours include Guatemala City, Najaf, Canberra, Basrah and Bogotá. 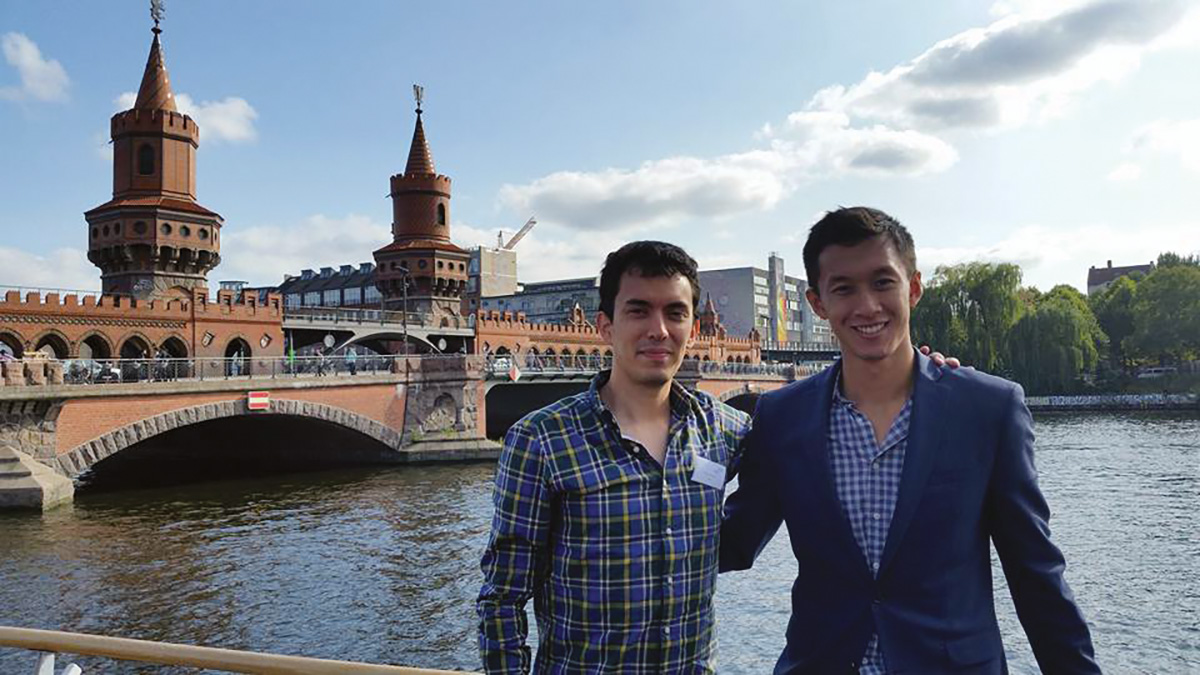 Moises Mendoza during graduate school in Berlin in 2016, with friend Adam Kong, also an FSO.
Courtesy of Moises Mendoza

MOISES MENDOZA: BRINGING CPR TO A SMALL POST IN MEXICO 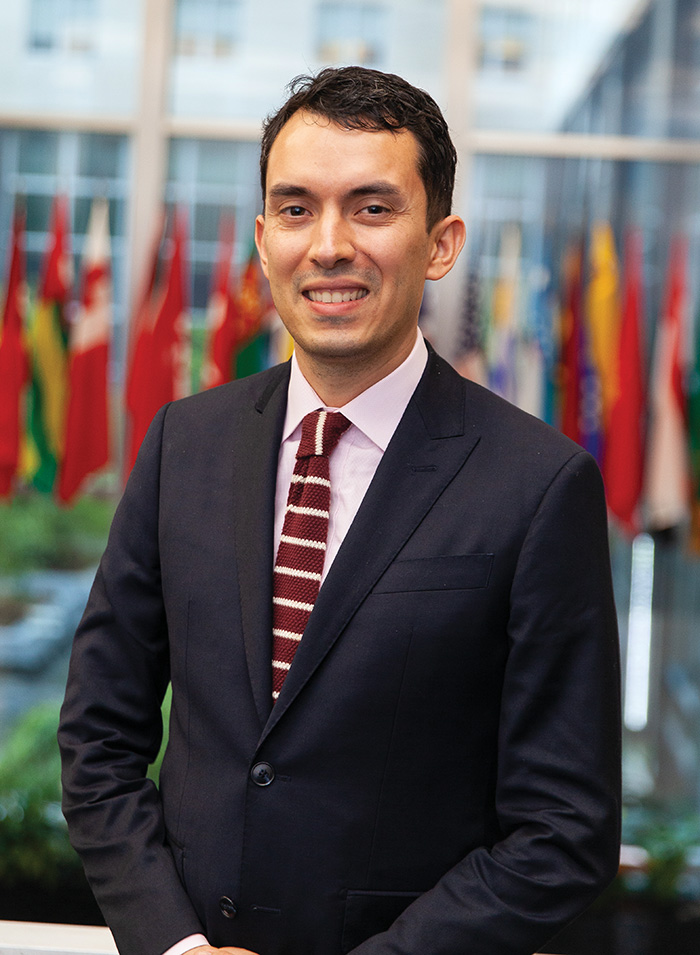 Moises Mendoza, an entry-level Foreign Service officer, was honored with the W. Averell Harriman Award for constructive dissent in connection with his extraordinary two-year effort, at great professional risk, to make U.S. Consulate General Matamoros safer by ensuring his colleagues had training in dealing with medical emergencies. Because the consulate has no medical unit and local emergency response services are lacking, Mr. Mendoza was concerned that colleagues experiencing a medical emergency could die before help arrived.

Despite bureaucratic obstacles, he became an emergency medical technician (EMT) and an instructor in cardiopulmonary resuscitation (CPR) so that he could make the consulate safer. He then developed a partnership with a local hospital to make his work sustainable, creating a model that many other small posts can follow.

Mr. Mendoza went far beyond what would be expected from an entry-level officer in overcoming obstacles to his proposal. When he learned that no funding was available for his emergency medical training, he obtained a scholarship from the Foreign Service Institute to fund his certification as an EMT. When he was told that the department couldn’t pay for his training to be a CPR instructor, he worked with Valley Regional Medical Center in Brownsville, Texas, across the border, to obtain training at no cost.

But when Mr. Mendoza approached management to gain approval to set up a training program at post, he ran into a new challenge. Several officials expressed liability concerns and Mr. Mendoza was not permitted to offer CPR training to his colleagues.

But Mr. Mendoza worked with all stakeholders to address their concerns. In 2019 he re-approached management to explain his idea and received permission to teach CPR at post. He then trained more than a dozen staff members and their families. He also facilitated the training of a local staff member to be a CPR instructor, at no cost to the department.

This will keep this project sustainable and ensure that despite Matamoros having no medical unit, there will always be someone available to teach CPR to community members. Because of Mr. Mendoza’s efforts, Matamoros is now a safer post for all members of the consulate community.

This award demonstrates that the Foreign Service values innovation, striving to make positive change despite all obstacles and making our institution better. Constructive dissent is not always easy, but sometimes it is simply the right thing to do.
–Moises Mendoza

“To me, this award demonstrates that the Foreign Service values innovation, striving to make positive change despite all obstacles and making our institution better,” Mr. Mendoza said upon receiving the award. “Constructive dissent is not always easy, but sometimes it is simply the right thing to do. I feel deeply honored to follow in the footsteps of some fantastic officers who have won this award.”

Moises Mendoza joined the Foreign Service in 2016 and completed his first tour in Matamoros in June 2019. He is now in language training and will serve as a political officer in Port-au-Prince beginning in 2020.

He holds a bachelor’s degree from Georgetown University and master’s degrees in public policy and international affairs from the Hertie School of Governance in Berlin, Germany, and Columbia University, respectively. Prior to joining the Foreign Service, Mr. Mendoza was a journalist whose work appeared in the Houston Chronicle, the Los Angeles Times and Hemispheres magazine, among other publications. 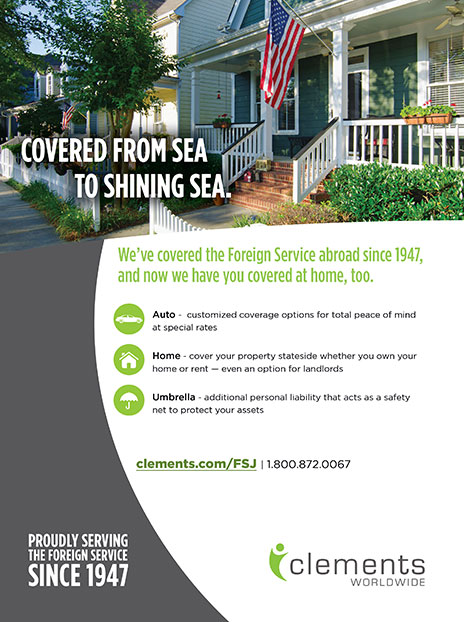 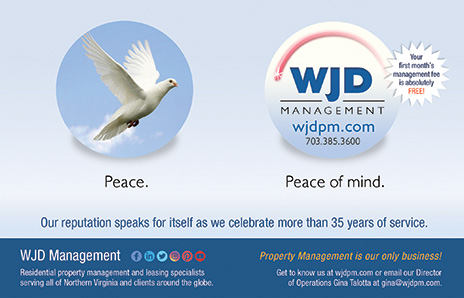