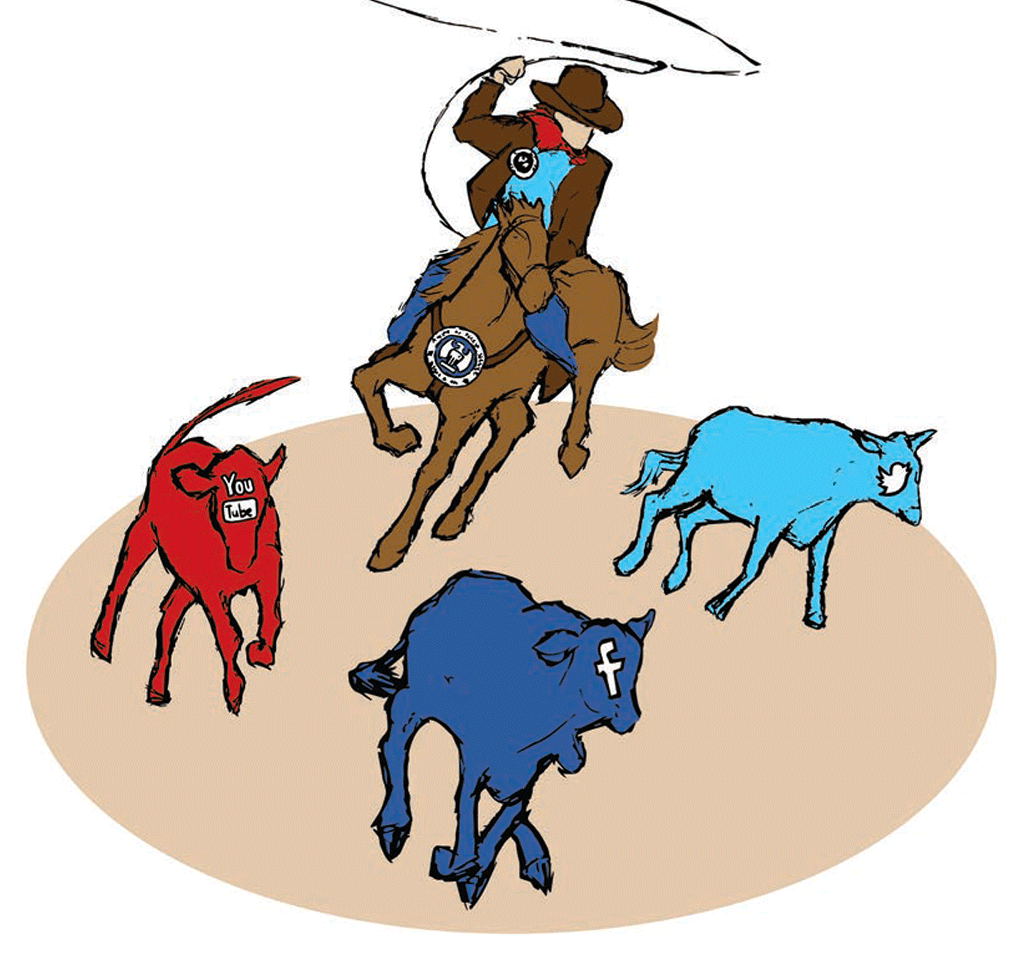 Both as a professional association and a labor union, AFSA has sought to communicate freely and regularly with members ever since its founding in 1924. Starting with telegrams, airgrams and letters in our earliest days, we have utilized many forms of communication over the past nine decades. (Who can forget the heyday of the Telex machine?)

Since the mid-1990s, AFSA has maintained a website and made extensive use of e-mail to reach members. While those are still our most important methods of reaching out to the membership—65 percent of which is abroad at any given time—changing times call for changing attitudes toward member engagement. That is why, in mid-2009, AFSA made the decision to join the growing world of social media.

Our first platform was Facebook, which at the time was by far the most dominant social network. Initially a favorite of teenagers and 20-somethings, Facebook has now matured significantly. According to April 2013 data from “computational knowledge engine” Wolfram Alpha, the average age of a Facebook user is now about 26 years, compared to about 20 at its inception.

Obviously, the original users have gotten older, which helps raise the average age, but there has also been a large influx of users over 50 who join Facebook to keep up with family, friends and co-workers, both near and far. As it has matured, its content has become somewhat more balanced between the frivolous and the more substantive information ranging from news to discussions.

For AFSA, Facebook has provided an excellent way to reinforce information disseminated through other means, as well as to provide an outlet for news and event information that may not fit into regular e-mail messages, on the AFSA website or in The Foreign Service Journal. This content includes news items of interest to the Foreign Service community, photos and videos from AFSA events, quick updates and reminders about our programs, and “human interest” stories from the Foreign Service world. Even without doing much publicity, we are closing in on 5,000 followers (equivalent to about 31 percent of the AFSA membership).

More than half of our followers are in the 25-44 age bracket; we have more female followers than the average Facebook page; and we do very well with users over the age of 65. We have been very pleased with the level of engagement Facebook affords us in connecting one-on-one with AFSA members from all over the United States and around the world.

Facebook has also been crucial to our efforts to engage the public, specifically the high school and college student segments. We diligently post links to programs, events and information of interest to those audiences in order to encourage their interest in the Foreign Service. This includes our national high school essay contest, information on internships in foreign affairs, and often fairly general information on Foreign Service life. We plan to continue our outreach to those groups using Facebook as a primary outlet.

In addition, more women than men use Twitter; well over half of AFSA’s nearly 700 Twitter followers are women, and the average age is just over 40. Among our followers, you’ll also find a large number of organizations, agency offices and bureaus, embassies and consulates, and foreign affairs watchers. This network of connections has a multiplying effect that takes our message to an even wider audience.

Quite honestly, it took us a while to figure out the best way to make use of Twitter’s strictly enforced 140-character limit and immediacy. The Foreign Service tends to rely on the written word fairly heavily, so the succinctness of this particular platform took some getting used to. Over time, though, it has become an important tool in our communications kit.

Facebook has been crucial to our efforts to engage the public, specifically the high school and college student segments.

In addition to serving as reinforcement for messages from our website and e-mails to the membership, we are now using Twitter quite heavily to push the excellent content from the pages of The Foreign Service Journal out to various audiences. Each month, we tweet out every single feature article and column from the new issue, making use of hashtags and Twitter handles to catch the attention of those we think might appreciate the content.

For instance, our October issue featured an article about Togo by a retired USAID Foreign Service officer and returned Peace Corps Volunteer. Our tweet about it included the Twitter handles for USAID (@USAID) and the Peace Corps (@PeaceCorps), prompting both agencies to retweet the notice to their respective followers. This ensured that more than 850,000 individuals saw a link to that article appear in their Twitter feed.

This illustrates how AFSA can best use Twitter—as a means of engaging outside audiences by pushing our content directly to them. If you are on Twitter, we hope you will follow us @afsatweets.

AFSA joined YouTube in 2011. Most Internet users are familiar with this site; in fact, you’ve probably viewed a video there without realizing it. But AFSA uses YouTube in a very specific way, which was well defined from the very beginning: making all AFSA events here in Washington available for online viewing by the general public and our members outside the Washington, D.C., area.

We have been very pleased with the results. With a minimal resource and time investment, our events have been viewed almost 10,000 times in two years. This expands the reach of our programming tenfold, at the very least. Our most popular YouTube video is still our April 2012 panel discussion on third-culture children in the Foreign Service, which has drawn more than 1,000 views thus far.

Word to the Wise: Join, but Use Caution

The Foreign Service is full of tech-savvy folks who are members of numerous social networks, ranging from the most popular to some of the more obscure ones. Overall, this is a highly positive development. Many of our members serve in remote places where phone connections are not always reliable, and social media are an efficient and easily available avenue for communicating with family and friends at home, as well as colleagues around the world.

While AFSA is a private entity and not governed by federal rules and regulations regarding the use of social media, our active-duty members are completely bound by those rules. Because there is little if any separation between our members’ private and public personas on social media, AFSA has noticed an increased scrutiny of individuals by the department as a result of their use of these platforms.

In response, AFSA has prepared comprehensive guidance (see p. 36 and the AFSA website), which we hope will assist our members in understanding what is acceptable and what is not on social media.

Relevant FAM sections for official and personal use of social media include: 5 FAM 770, “Federal Web Sites”; 5 FAM 790, “Using Social Media”; 3 FAM 4170, “Official Clearance of Speaking, Writing and Teaching”; and 10 FAM 130, “Remarks and Writings for the Media and General Public.” The Department of State is currently working with AFSA to revamp 3 FAM 4170 to make it more “user friendly” and practical in light of the increased use of social media by department employees. In the meantime, the June 9, 2009, edition of 3 FAM 4170 is the version that is enforced.

Overall, social media outlets have been beneficial for the Foreign Service. They have made life overseas easier and separation from loved ones a bit more bearable. However, we encourage all members to acquaint themselves with the (regularly updated) regulations regarding this area.

Sometimes, unfolding events have a way of showing you a new benefit of a technology you’ve been using for a while. During the government shutdown this past October, AFSA was able to make use of our social media platforms to push information, guidance and resources to our members who were blocked from accessing their work e-mail.

While we diligently utilized e-mail to provide this same information to members, using Facebook and Twitter to amplify the message and ensure its reach to furloughed individuals allowed us to realize just how useful these new ways of communication can be. Based on feedback from members, AFSA was able to provide information that the foreign affairs agencies either could or would not provide. Social media will play an important role in any shutdowns or similar situations in the future.

Partly for that reason, we are constantly monitoring social media trends to understand which emerging platforms would fit within our communications toolkit. For us to add a new medium, it will ideally hit that demographic sweet spot at which we joined Facebook, Twitter and YouTube. The number of users is rising, the resources are globally available, and they attract more than just the eager, early-adopting pre-teen and teenage crowds.

We are also considering joining LinkedIn, as it fits the professional profile of our membership. For the time being, we have no plans to join Pinterest, but we expect to participate in a photo-sharing social network, such as Flickr, in the near future.

Another platform we have considered joining, but have rejected for the time being, is Instagram. While it is currently the fastest-growing social network, its average current user is a 16-year-old female. That’s not exactly AFSA’s target demographic!

We intend to keep our social media options open for the future so that we can engage our members wherever they are in significant numbers. For now, we hope you’ll join the conversation online and follow AFSA on Facebook, Twitter and YouTube.

Ásgeir Sigfússon is AFSA’s director of new media. He has been with AFSA since 2003.