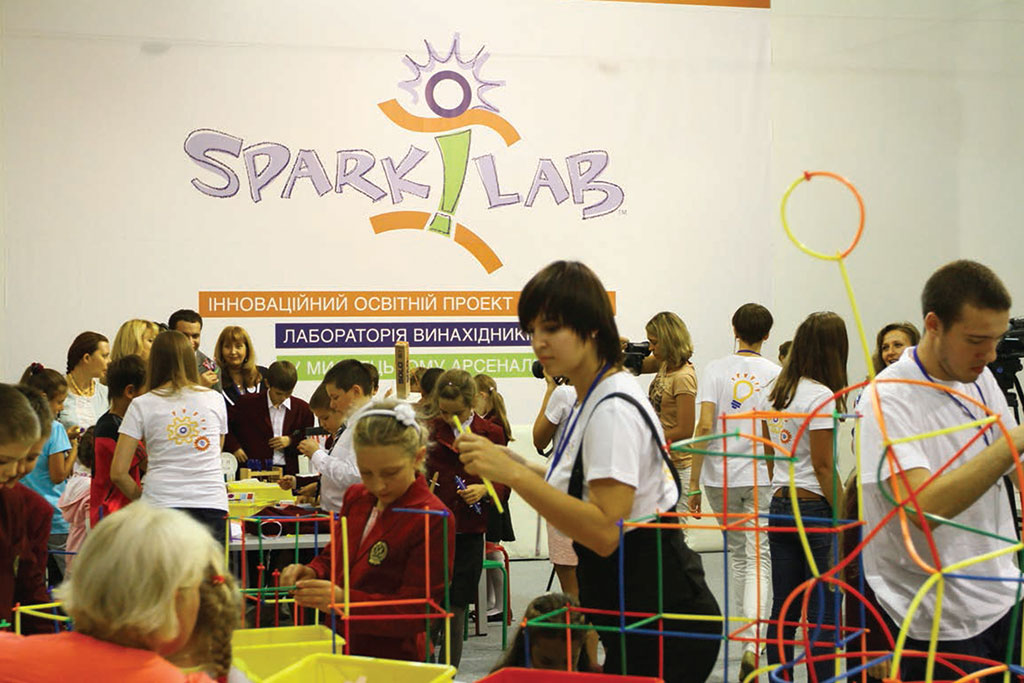 Ukrainian children learn by inventing at Spark!Lab, an installation from the Smithsonian’s Lemelson Center for Invention and Innovation. The September 2012 project, in cooperation with Kyiv’s Mysteskyi Arsenal Gallery, was supported by funding from the U.S. embassy.
Courtesy of the Smithsonian

As I was hanging pictures in my office at the Smithsonian Institution at the beginning of my assignment there in 2011, a new colleague stopped by to welcome me.

“Chiang Mai… Chiang Mai…” she pondered, as I placed photos from previous posts on the walls. “I think we have forest plots there.” And so I began to glimpse the extent of the Smithsonian Institution’s international reach, far beyond the familiar museums on the Mall.

Founded with a bequest from an Englishman, James Smithson, the Smithsonian has always had a global perspective and international reach in its mission to advance the “increase and diffusion of knowledge.” In the words of former Secretary S. Dillon Ripley, “The pathways followed by knowledge and culture do not observe national boundaries.”

Today, thanks to the establishment of a State Department detail position at the Smithsonian in 2009, State bureaus and posts are able to take greater advantage of its international presence to reach foreign audiences. Whether pursuing conservation in Burma, building a Spark!Lab in Kyiv or bringing Hungarian musicians to the Folklife Festival, the Smithsonian’s international engagement complements the State Department’s work in education, culture, the environment and scientific cooperation.

The sheer number of shared interests between State and the Smithsonian make the detail assignment I held an important investment for both sides.

I was fascinated to find that the position I held for two years has historical roots. Marc Pachter, who later became director of the National Portrait Gallery, served as the Smithsonian liaison to the U.S. Information Agency in the 1980s. And in 2002, the Bureau of International Information Programs detailed Martin Manning to the National Portrait Gallery to work with Smithsonian Institution staff on the American Rooms Project, envisioned by then-Under Secretary for Public Diplomacy and Public Affairs Charlotte Beers as an interactive exhibit highlighting American themes.

In my case, the detail provided lots of leeway, so I focused on helping State colleagues take advantage of Smithsonian resources for the benefit of overseas audiences. This mission set me on a path of discovery that ranged from jazz to mobile apps to wildlife conservation. From the Smithsonian side, I was regularly consulted on international issues, with my China experience proving especially welcome. 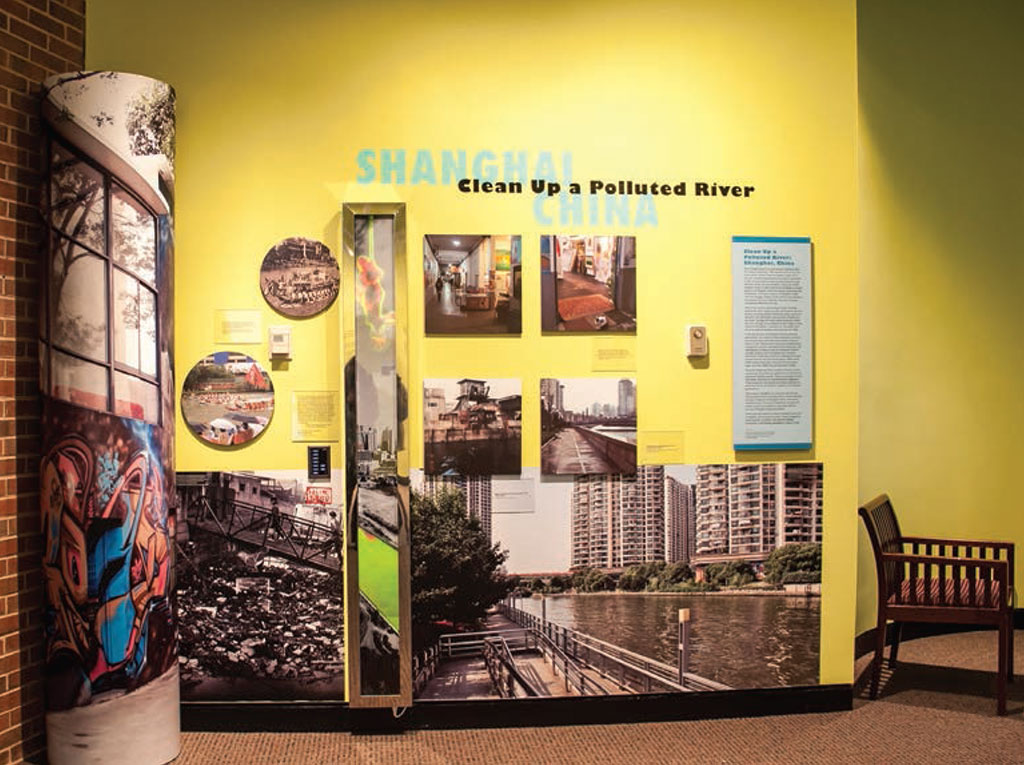 The U.S. consulate general in Shanghai assisted the Anacostia Community Museum in developing an exhibition called “Reclaiming the Edge: Urban Waterways and Civic Engagement.” It opened in October 2012.
Courtesy of the Smithsonian

The goals of the two institutions are often symbiotic. As the world’s largest museum and research complex, the Smithsonian Institution is focusing on greater engagement with world audiences, particularly non-elite and youth groups, while the Department of State is eager to use the Smithsonian’s expertise to enhance the dissemination of information about the United States to overseas audiences. Here are just a few examples of such teamwork:

Projects like the Global Tiger Initiative and the Deep Reef Observation Project unite Smithsonian scientists with State Department personnel from OES and other bureaus.

The Smithsonian Institution has long been central to U.S. participation in international expos and world fairs, starting with its leading role in the 1876 Centennial Exhibition in Philadelphia. According to Martin Manning, curator of the Public Diplomacy Historical Collection, the Department of State and U.S. Information Agency worked with the Smithsonian on international exhibitions dating back to the 1940s, organizing art exhibitions abroad and supporting American participation in international art shows: 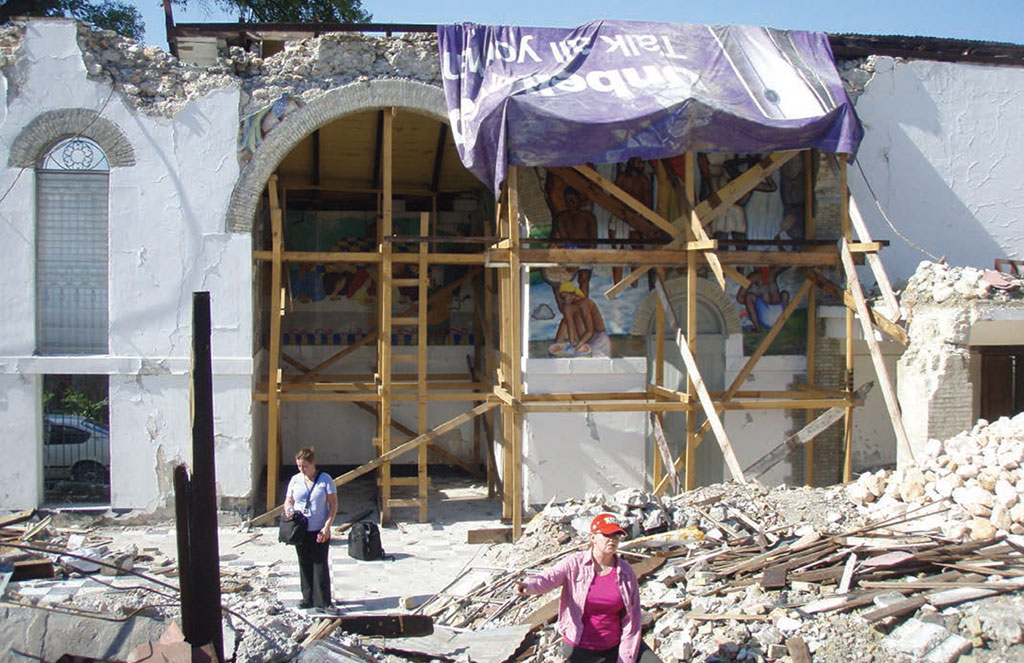 Restoring the wall murals at the Holy Trinity Episcopal Church in Port-au-Prince was part of a cultural recovery project organized by the Smithsonian after the devastating earthquake that struck Haiti in January 2010.
Courtesy of the Smithsonian

Science and technology projects offer equally rich areas for cooperation, given the Smithsonian’s extensive international scientific involvement and the department’s pursuit of science diplomacy in more than 100 countries.

The Smithsonian’s first sustained overseas operation, an observatory, started in Chile in 1918. Nearly a century later, in March 2012, Under Secretary for Science Eva Pell joined U.S. Ambassador to Chile Alejandro Wolff at the inaugural excavation blast at Las Campanas in the Atacama Desert, home of the future Giant Magellan Telescope. This 82-foot (24.5-meter) observatory is scanning the cosmos in unprecedented detail.

Scientists from the Smithsonian Conservation Biology Institute use their expertise in ecology, forestry, global change science, wildlife and other disciplines in 25 countries, including Panama, Peru, Gabon, Namibia, Botswana, Thailand, Malaysia, Mongolia, China, India and Jamaica. SCBI also plays a key role in major conservation partnerships like the Global Tiger Initiative. The institute’s Gabon Biodiversity Program leverages a partnership with Shell Gabon to support biodiversity conservation and sustainable development, a model that is also being used in Peru and other biodiverse, resource-rich countries.

The Smithsonian Institution has long been central to U.S. participation in international expos and world fairs, starting with the 1876 Centennial Exhibition in Philadelphia.

Projects like the Global Tiger Initiative and the Deep Reef Observation Project unite Smithsonian scientists with the Bureau of Oceans and International Environmental and Scientific Affairs, while the National Zoo’s pandas are a matter of high-level diplomatic, as well as public, interest. Officers training for environment, science, technology and health positions take a behind-the-scenes tour of the Natural History museum to see how historic collections can illuminate modern-day questions related to climate change, biodiversity, conservation and public health.

Kenya is another hot spot of past, current and future Smithsonian activity. Just three weeks after leaving the Oval Office in 1909, Theodore Roosevelt set out for British East Africa on an expedition co-sponsored by the Smithsonian. Many of the big-game specimens he bagged there were destined for the new U.S. National Museum building, today known as the National Museum of Natural History. Roosevelt’s expedition also collected live animals for the National Zoological Park, including a leopard, lions, cheetahs and gazelles.

Kenya’s participation in the 2014 Folklife Festival in Washington, D.C., will give the Smithsonian a chance to showcase its long involvement with the country, from historic photos and specimens to Folkways recordings, National Zoo animals and planetarium shows.

As for that forest plot in northern Thailand I mentioned at the beginning of this article, it turned out to be part of a global network of 48 locations researching tropical and temperate forests. By collecting consistent data over many years, scientists can make direct comparisons between sites. This is an unprecedented research program in climate and forest science that not only benefits conservation efforts, but builds long-term relationships whose value any diplomat can appreciate.

I thoroughly enjoyed my time at the Smithsonian and the opportunity to work with colleagues dedicated to the increase and diffusion of knowledge. While Department of State details at other national institutions, such as the Library of Congress and the National Archives, have come and gone, the sheer number of shared interests between State and the Smithsonian make this position an important investment for both sides.

In fact, there is plenty of scope for even closer cooperation between the two entities. The potential for cultural and scientific diplomacy through this partnership is, as the Smithsonian’s brand proclaims, “Seriously Amazing.”

Beatrice Camp, a Senior Foreign Service officer, was on detail from the Department of State to the Smithsonian Institution as senior adviser to the under secretary for history, art and culture from 2011 to 2013. Since joining the Foreign Service in 1983, she has served in Shanghai, Chiang Mai, Budapest, Stockholm, Bangkok, Beijing and Washington, D.C.