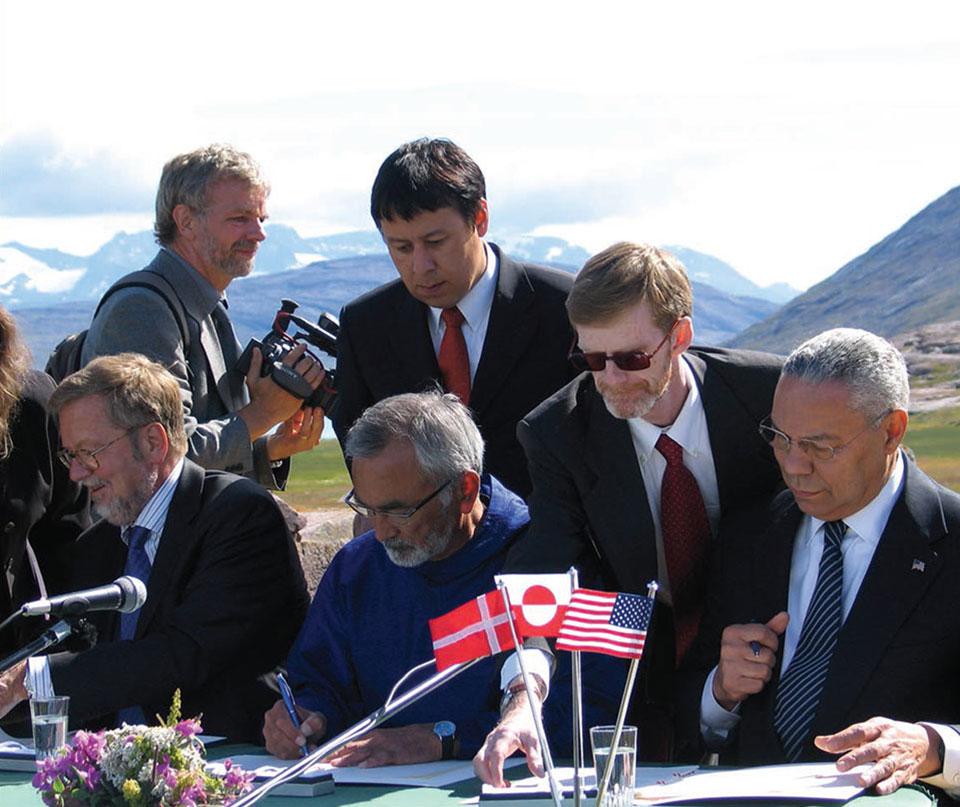 In the tiny fjord village of Igaliku in southern Greenland, U.S. Secretary of State Colin Powell (far right), Greenland Home Rule Deputy Premier Josef Motzfeldt (center) and Danish Foreign Minister Per Stig Møller sign an agreement in August 2004, paving the way for upgrading the early warning radar system at Thule, the U.S. air base in northern Greenland. Assisting Sec. Powell is Foreign Service political officer Dan Lawton (second from right).
For the first time, Greenland was a party to the century-old defense agreement between Denmark and the United States that governs U.S. defense activity on the island. The three parties signed two additional documents, one providing for economic and technical cooperation between the United States and Greenland, and another to protect the environment.
Jonathan M. Berger

Our official diplomatic correspondence has changed considerably since the days of the quill pen, and even since the not as distant period of typed dispatches. But as much as the forms may change, the need for insightful analysis from abroad has not.

Foreign policy should be informed and guided by the insights discerned by our diplomats posted overseas, who inject local perspectives into policy debates and decision-making—not made in a vacuum.

Yet the challenges to reporting officers in the field today are particularly acute. Technological change strains the nexus between form and substance, and overseas posts must compete for the attention of Washington audiences focused on their email inboxes. On top of that, the unauthorized online publication of purported cables has greatly undermined our interlocutors’ trust. And a work culture that emphasizes leadership and managerial skills can inadvertently marginalize written communication skills.

Are Cables an Anachronism?

Remember airgrams? They were typed informative reports from overseas missions sent by diplomatic pouch back to Washington as a means of alleviating overtaxed telegraphic systems. Over time, they earned a reputation for containing more information than intended audiences had time to read.

As telegrams—or “cables,” as they are commonly called—came to dominate State Department reporting and analysis, airgrams were phased out as a form of official communication in 1991, almost 50 years after they had been introduced.

In 1946, then-Chargé d’Affaires to Moscow George Kennan wrote perhaps the most famous of diplomatic cables, the “Long Telegram.” This 8,000-word message sought to explain the sources of Soviet (mis)behavior while recommending a pragmatic policy of containment.

In his Memoirs, 1925-1950 (Little, Brown and Company, 1967), Kennan modestly suggested that his message had such an enormous influence because of the receptivity of his audience. Six months earlier, he argued, it would have been received with “raised eyebrows and lips pursed in disapproval.” Six months later, “It would probably have sounded redundant, a sort of preaching to the convinced.”

Kennan’s Washington readers in all likelihood received batches of cables, delivered to their real (not virtual) inboxes, once in the morning and once in the afternoon. Handling cables mandated some engagement with these texts, even if only to glance at the summary paragraphs, or at least the subject lines, before marking them for shredding. Readers would annotate noteworthy missives by highlighting sentences, scribbling notes in the margins, or sharing them with colleagues.

It is hard to imagine an 8,000-word telegram on any subject being read today, let alone having a similar impact. Kennan himself acknowledged that he divided the telegram into five sections so it would not appear “so outrageously long.” And therein lies an intrinsic tension. Most Washington readers would counsel, “the shorter the better,” while most drafters in the field bristle at “oversimplifying” for the sake of brevity.

Today, Washington readers enjoy the advantages of paperless systems, but they also generally devote far more attention to their email inboxes than their cable queues. News Washington can use is often quickly conveyed to target audiences via email in easily digestible form. In contrast, a reporting cable on the same subject is more cumbersome to access, or it may be drowned out by the sheer volume of telegrams that pour in from embassies and consulates daily. It may even seem duplicative, merely “memorializing” previously communicated information.

From Action to Reaction

Foreign Service officers at home and abroad must confront what Marshall McLuhan, in The Medium Is the Massage: An Inventory of Effects (Bantam Books, 1967), had already branded a “global village” of “allatonceness.” McLuhan argued that the speed of communication, which keeps increasing, forces us to “shift our stress of attention from action to reaction.”

The breadth, depth and pace of news and commentary today are so colossal that there is precious little time for deliberation and reflection. Diplomacy was once likened to three-dimensional chess, but today the more apt simile would be speed chess.

In such an environment, cables that have real impact are likely to have been shared as an email attachment with someone’s strident exhortation: “Read this!” They also most likely mimic email messaging by frontloading conclusions, using ticks or bullets, or employing a breezy sentence structure. A snappy subject line always helps, and embedded images may attract attention.

Even so, how many overtaxed desk officers, working hard to meet the everyday operational needs of their office, would prefer to plead the Fifth Amendment than honestly answer the frustrated query of a political or economic counselor: “Didn’t you read our cable?”

A Massive Breach of Confidentiality

It’s not just the short attention span of harried Washington audiences with which drafting officers must cope, however. They are also working in the wake of an unprecedented assault on the integrity of classified communications systems. Diplomats rely on confidentiality just as much as doctors, lawyers and the clergy. That’s why the State Department waits at least 30 years before publishing diplomatic correspondence in its Foreign Relations of the United States series.

Previous experiments in speedier public access fared badly. William Seward, President Abraham Lincoln’s Secretary of State, opted to print recent letters between his office and American ministers abroad for public inspection. Seward biographer Walter Stahr quotes the American minister (ambassador) to London as complaining that the “rather liberal publication of my more confidential dispatches may stand in the way of my future usefulness at this post” (Seward, Simon & Schuster, 2012).

Nor is the United States the only country to have its diplomatic correspondence leaked with deleterious consequences. The British Foreign Office once had a storied tradition of ambassadors sending valedictory dispatches as they prepared to leave their posts. That custom reportedly ended in 2006, in large part due to the difficulty of keeping the wit, candor and condescension of departing chiefs of mission confidential.

The illegal transfer of an enormous trove of alleged diplomatic cables to WikiLeaks in 2010 posed new challenges for drafting officers. First and foremost, the unauthorized publication of such correspondence seriously damaged U.S. national security. Apart from premature revelations, the leaks exposed foreign sources of information to retribution, giving other potential interlocutors pause about the risks of engaging in dialogue with U.S. diplomats. It suddenly became harder to win or retain the trust of foreign contacts, and elliptical references to sources became more common (e.g., “a veteran party insider told us…”).

The Foreign Service did win some new respect as the commentariat extolled the quality of its writing and reporting. Some columnists even opined that the best missives had a literary quality to them. As Fareed Zakaria wrote in Time, “When foreigners encounter U.S. diplomats and listen to their bland recitation of policy, they would do well to keep in mind that behind the facade lie some very clever minds.”

This should not have come as a surprise, of course. U.S. diplomats have enviable access, speak foreign languages fluently, and are steeped in local knowledge. They can also produce clear and purposeful prose.

The Power of the Pen

Reporting from the field, in whatever form it takes, is still the indispensable ingredient of any meaningful foreign policy discussion. Our diplomats’ deep understanding of foreign countries and cultures, and ability to discern political and economic trends that matter to the United States, constitute our comparative advantage in the U.S. foreign policymaking community.

Even so, knowledge does not necessarily equal power. Foreign Service officers are called on to be versatile, and communication is only one of the six competencies evaluated for tenure and promotion. Written communication, in turn, is only one of five subcomponents of that particular precept.

The means of communication may change, but the need for bankable reporting and analysis does not.

Washington readers are besieged by what Joseph Nye calls a “paradox of plenty,” such that “attention rather than information becomes the scarce resource.” It has probably long been true that the time one has to write or read cable traffic is inversely proportional to one’s decision-making authority. Nye suggests that in such an environment, “Editors and cue-givers become more in demand.”

I recall a Foreign Service Institute instructor asserting that, anthropologically speaking, the Foreign Service is an oral culture. In that vein, the staff assistant regularly briefing a senior State principal has a distinct advantage over the drafting officer who performed the actual on-the-ground analysis.

Upholding the Value of the Reporting Function

During the 1992 presidential campaign, independent candidate Ross Perot suggested that ambassadors were relics, akin to “sailing ships,” and that Washington could accomplish its foreign policy goals by simply communicating with foreign capitals by phone and fax. Friends of the Foreign Service rightly responded that there is no substitute for having diplomats on the spot who build relationships and advocate in person with foreign governments and publics.

Somewhat lost in the debate was the fact that Perot’s comment ignored a vital function of U.S. diplomats abroad: conveying to U.S. policymakers analysis of significant local events. A data systems entrepreneur from Texas can be forgiven for getting that wrong, but we would do well to remind ourselves of that important job from time to time. All Foreign Service work is vital, but the reporting function is truly fundamental to the success of U.S. foreign policy.

It’s safe to say that the airgram is not coming back, not at a time when the Associated Press is asking its reporters to limit most of their stories to 300-500 words. The cable is still with us, but is becoming ever leaner. Email updates, BlackBerry-friendly digests and weekly roundups with cable links are all in the ascendancy.

While the means of communication may change, the need for bankable reporting and analysis does not. This is true despite the fact that most writing we produce and see is decidedly temporal.

Still, the best Foreign Service reporting stands the test of time. Look again at Kennan’s Long Telegram: “At the bottom of the Kremlin’s neurotic view of world affairs is traditional and instinctive Russian sense of insecurity.” And then fast forward to recent press comments (no cable revelations here) by President Obama: “Russia is a regional power that is threatening some of its immediate neighbors—not out of strength, but out of weakness.”

Dan Lawton, deputy director of the Office of Southern European Affairs in the Bureau of European and Eurasian Affairs, served as political counselor in Athens from 2010 to 2013. Since joining the Foreign Service in 1990, he has also served in Caracas, Copenhagen, Lima, Karachi and Mexico City. The views expressed in this article are his personal opinions and are not intended to represent U.S. government policy.