As AFSA president, I promised to raise awareness of the Foreign Service across our great country. I am grateful beyond words for the national conversation that has taken shape about the tremendous value not only of American diplomacy but of American diplomats, the extraordinary people in the Foreign Service who spend two-thirds of their careers deployed around the world. Especially now, as Christmas lights go up around my neighborhood, their service and sacrifice, our service and sacrifice, speak to me.

I am thankful for the remarkable bipartisan support on Capitol Hill, where members from both sides of the aisle have spoken out and insisted on preserving the diplomatic capacity that underpins America’s global leadership role.

And I am thankful to every journalist who has been working to tell this story. The free press is a critical guarantor of the constitutional order we are sworn to uphold, and the journalists who have covered State with such dedication and sophistication have done a great service to the American people.

Looking ahead to the new year, what is at the top of AFSA’s wish list for the Foreign Service?

First, a return to normal promotion numbers. The extraordinary, and perhaps even unprecedented, decision of early 2017 to slash FSO promotion numbers into and within the Senior Foreign Service by more than half cannot be repeated next year without doing grave, long-term harm to the U.S. Foreign Service. The number of promotions from FS-01 to OC fell from 91 last year (2016) to just 43 this year (2017), and the number of promotions from OC to MC fell from 61 to 29.

Keep promotion numbers this low again next year, and not only will the size of the Senior Foreign Service officer corps continue to shrink, but top-flight FS-01s will also be forced out of the Service. These are the very officers we need to lead this institution for the next 15 years.

Second on our wish list is lifting of the self-imposed hiring freeze and a return to normal hiring levels. The State Department has now confirmed its intent to hire only 101 new Foreign Service officers (including 55 Pickering and Rangel Fellows) in 2018, down from 366 in 2016 (which was in no way a high-water mark).

That hiring target—101—is the lowest in at least a quarter of a century. Even in the depths of the mid-1990s cutbacks, the annual intake of new officers never fell below 100.

We remember how that turned out: a dozen years later, the Foreign Service was desperately short of seasoned officers. We were able to fill Foreign Service positions in Iraq and Afghanistan only at the cost of gutting staffing at embassies across the world, undermining America’s ability to keep allies in the fight.

Our wish for a return to normal hiring includes Foreign Service specialists, many of whose specialties are in deficit, creating cascading management challenges. And it includes ending the counterproductive hiring freeze on eligible family members, which is eating up precious management time, jeopardizing critical post operations, and putting a significant strain on Foreign Service families.

Again, it is time to ask why. Why slash promotion numbers? Why continue this self-imposed hiring freeze?

As I have said repeatedly, including in my May 2017 column “Seizing Transition Opportunities,” we, the members of the career Foreign Service, are eager to be partners in an effort to streamline cumbersome bureaucratic processes, increase efficiency and refocus on core diplomatic priorities.

We love serving and want nothing more than to pull together to achieve the mission.

Remove these impediments and give us a strategy to guide our work for America and for our fellow Americans. That would make being far from home for the holidays completely worth it. 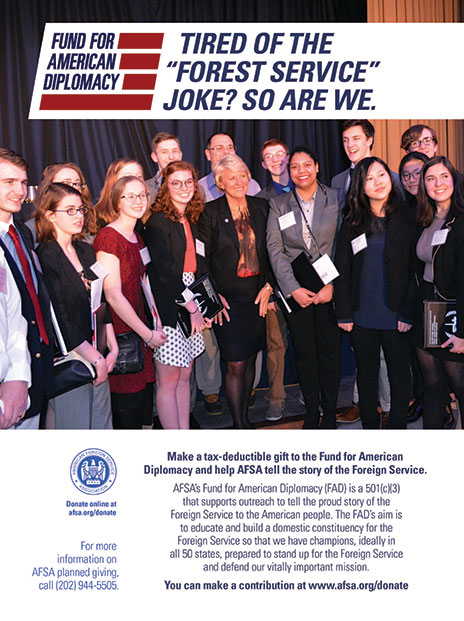