The Foreign Service Journal > June 2017 > On Launching a Rewarding Career

Thanks to the recruitment lunches that AFSA hosts, I’ve met hundreds of entry-level personnel over the last two years.

Some have reached out to me for advice, and responding to such requests has crystallized my thinking about what new Foreign Service employees should keep in mind as they launch what will hopefully be an incredibly rewarding (both personally and professionally) career.

I am putting some of my thoughts in writing here in the hope that our more junior colleagues may find them useful.

First, don’t try to game the system. I’ve seen people work themselves into a near-panic trying to calculate which job(s) they “must” take in order to be promoted.

Go where you (and your family, if applicable) will be happy. If you’re happy, you do better work, and when you do your best work, you thrive, making it easier for others to notice you. If you get promoted, that’s wonderful. If you don’t, it’s a moment of disappointment, followed by a return to your otherwise happy and fulfilling life.

On the other hand, if you go somewhere you don’t really want to be because you view it as a means to getting promoted, but then you do not get that promotion, you risk ending up not only unhappy, but also bitter or resentful. Which scenario would you prefer?

You are the only person who has to live your life, so make decisions that suit you. Conventional wisdom may tell you that you have to do a desk job, that you have to come back to Washington, D.C., for your third tour, or that you have to serve in D.C. to become a deputy chief of mission.

Each of these so-called rules has been broken by at least one successful member of the Senior Foreign Service.

If the timing isn’t right for you (or your family) to come back to Washington, then don’t. So what if it slows down your promotion rate? What do you care more about, your happiness or your grade level? The former should not depend on the latter.

Set yourself up for future success by allowing yourself time to grow and develop as a leader and manager.

Stop rushing and enjoy the journey. Some of the best Foreign Service jobs out there are at the FS-2 level, including some amazing details and training opportunities.

If you slow down and take advantage of the lessons you can learn along the way, by the time you eventually reach the senior ranks, you’ll be much better prepared and have much wider experience than someone who shot up through the ranks but had virtually no supervisory experience by the time he or she became a principal officer.

Set yourself up for future success by allowing yourself time to grow and develop as a leader and manager.

Your supervisor(s) can be more important than where you work. There are a few mentors whom I would enthusiastically work for again, no matter how unappealing the location.

This holds true even on your first or second tour. Working for one of those individuals can shape the rest of your career, not only in terms of whom you model yourself after, but also in terms of who speaks up on your behalf as you seek out later assignments.

Don’t just look at locations on your bid lists—ask around about your potential bosses.

Remain open to changing your plans. I joined the Foreign Service as an Arabist, convinced that I would spend my entire career in Arab countries. Twenty-five years later, I’ve spent about a third in the Arab world, a third in South Asia and a third in Europe.

Thrice I lobbied so hard for a job that it bordered on humiliating, only to end up with a completely different job that wasn’t even on my radar screen. Each of those “surprise” jobs turned out to be exactly the right place for me—I just didn’t know that until I got there.

Some of the above advice is easier said than done, but this final tidbit isn’t: have fun!

Just because you’re doing important work in difficult and/or dangerous places doesn’t mean that you can’t enjoy the experience. If you do so even a fraction as much as I have, you’re in for a wonderful career. 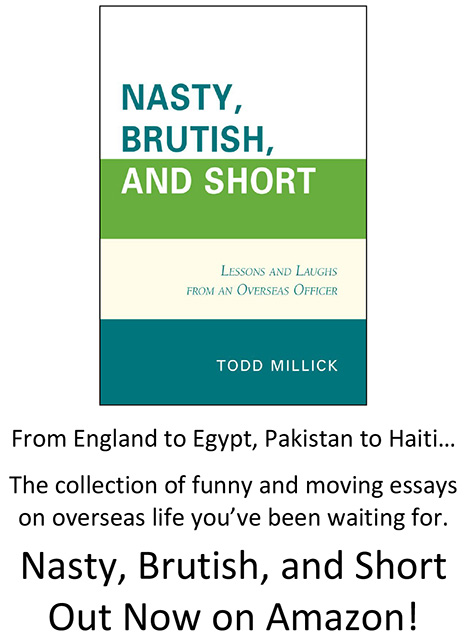