Life and Work in the Romanian Foreign Service

A former Transatlantic Diplomatic Exchange Fellow reflects on the similarities and differences between the Romanian and American diplomatic corps. 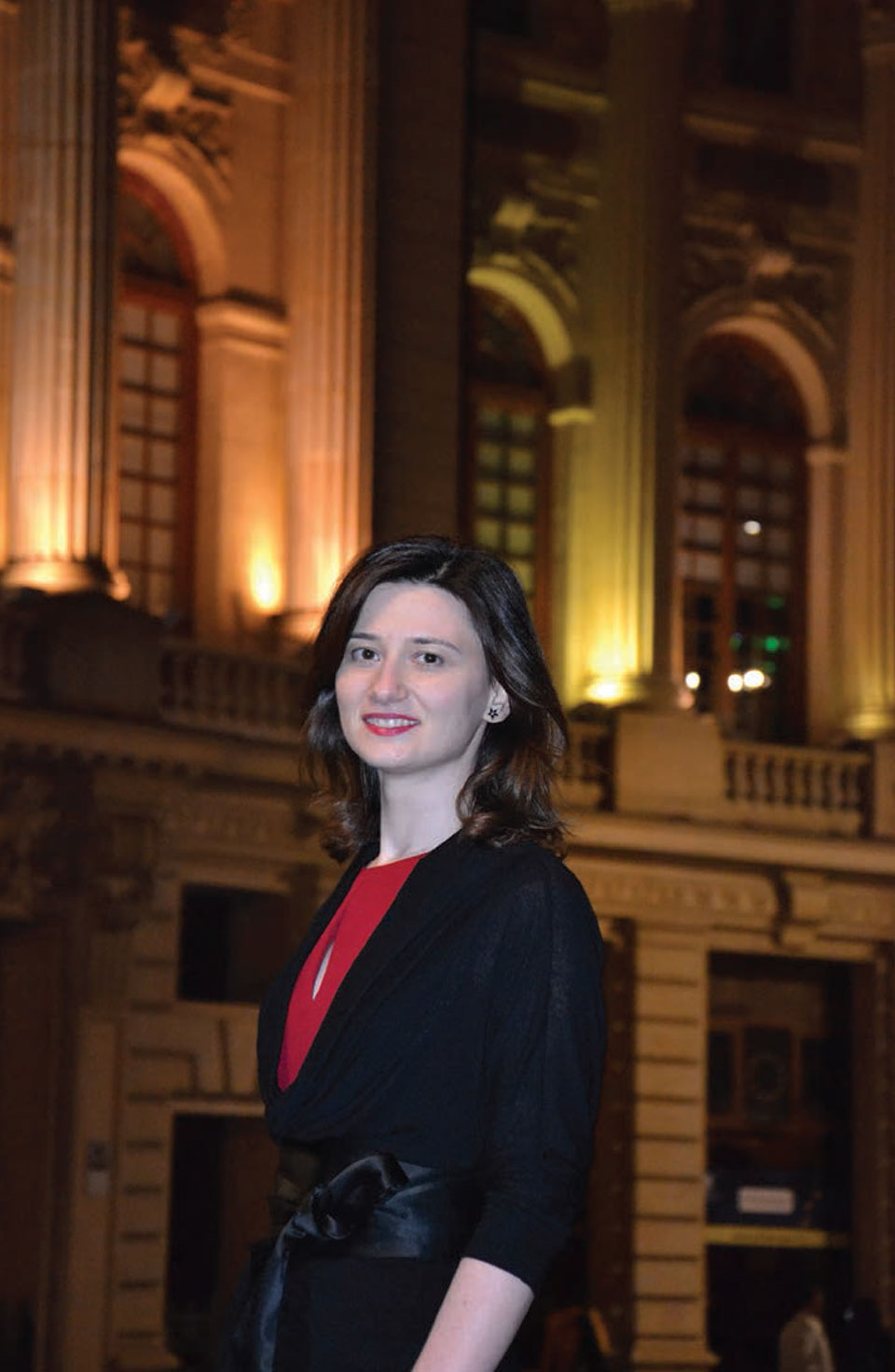 Diana Tase in front of the Central University Library of Bucharest in Revolution Square, where the 1989 Romanian Revolution against communism began.
Andreas Georgiadis

My diplomatic adventure began eight years ago when I joined the Romanian Foreign Service. I have served with enthusiasm and passion both within the Romanian Ministry of Foreign Affairs in Bucharest and overseas, in Prague, Rome, Brussels and Washington, D.C.

Being a diplomat is a career like no other. Where else can you change your job, the focus and location of your work every few years, without actually changing employers? Where else are you constantly encouraged to broaden your expertise and knowledge as well as develop your personal skills, both at home and overseas? Diplomacy is much more than a job; it is a unique way of life, and I love it.

Last year, my path brought me to Washington, D.C., and the U.S. Department of State with the Transatlantic Exchange Diplomatic Fellowship Program. It was my first time traveling outside Europe, and the experience was fascinating and enriching.

The excellent TDF program offers mid-career diplomats from NATO countries the chance to work closely with their American colleagues at the State Department, and for U.S. diplomats to work as TDFs with their diplomat-colleagues in those countries.

I vividly remember my first encounter with the State Department system during my first staff meeting in the Office of Iraq Economic and Assistance Affairs, my host office for the year. I was amazed by the “DOS-lish” language. It was something special: about 45-percent English and the rest ... acronyms.

Seeing my puzzled face, one of my friendly new colleagues reassured me that this happens to all newcomers, and that I’d get used to it. I did. In fact, by the end of the year, my DOS-lish was not bad at all.

Working at the State Department led me to discover amazing, dedicated people. I learned a lot, and feel inspired to continue to build bridges between the Romanian Foreign Service and the U.S. Foreign Service.

Where else can you change your job, and the focus and location of your work every few years, without actually changing employers?

Two Faces of the Same Coin

Similar to the American system, between assignments at missions overseas Romanian diplomats serve in the Ministry of Foreign Affairs headquarters in Bucharest. I envision working at headquarters and overseas as being two faces of the same coin. One face, diplomatic work in Bucharest, is similar to that done by other civil servants throughout the Romanian government. We serve as desk officers and work on different projects.

The other face might be seen as the unique one: performing diplomatic responsibilities overseas. At larger missions, Romanian diplomat might manage responsibilities related to one of the three major categories: political, consular and trade services. In smaller missions, one officer might do work in all three categories.

I joined the Romanian Foreign Service in 2006 following a hiring process that lasted several months. It was an open contest, and the competition was fierce. The exam was one of the toughest I ever took. There were only a limited number of positions available, after several years with no openings.

The baseline requirements were strict: a university degree (any subject is acceptable, making the career available to those with all kinds of backgrounds and abilities); command of two foreign languages; and specific skills, abilities and personal qualities like judgment, adaptability and communication and organizational skills.

All those requirements were tested during an extended process that included several stages: the writing test, where knowledge of specific world events had to be expressed in two foreign languages; an interview to evaluate oral communication and networking skills; and screening processes, consisting of physical and psychological tests, and a background check for the security clearance. 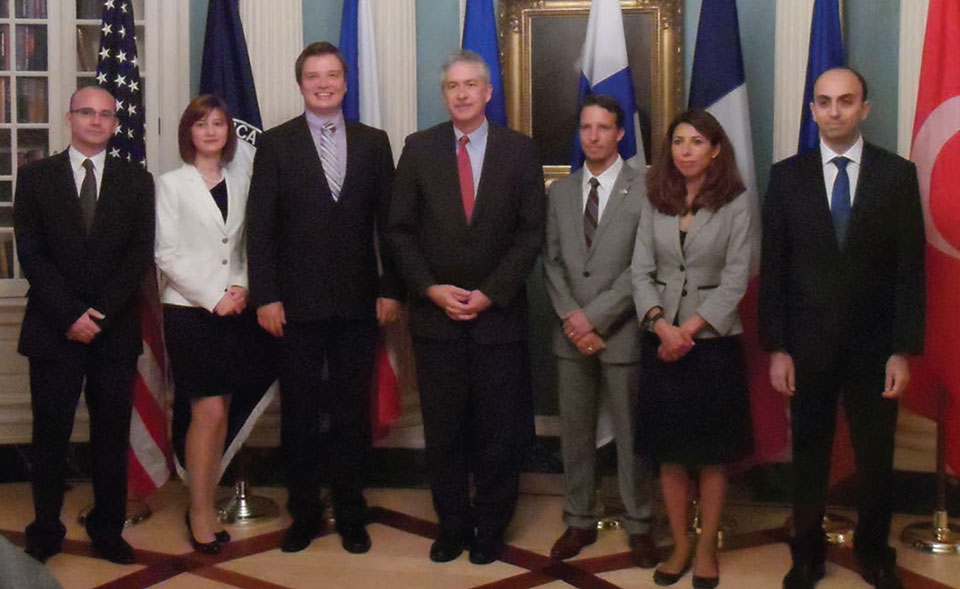 After completing the admission process, I joined the corps as a diplomatic attaché and was accepted into the political career path. The other path that our system generally offers is the consular path. Unlike the American system, one can easily “cross” the tracks during a Foreign Service career by following a relatively simple procedure.

During my first year with the Romanian Ministry of Foreign Affairs, work as a desk officer was blended with professional diplomatic training. The six-month mandatory basic orientation program—similar to the American A-100 class—was intense. Training is run by the Romanian Diplomatic Institute, attached to the MFA. Those classes brought together new and enthusiastic diplomats in learning and friendship. After that, supplementary short, skill-based courses followed.

The “DOS-lish” language was something special: about 45-percent English and the rest ... acronyms.

Despite the general similarities in continued learning processes between our systems, learning additional foreign languages is different in Bucharest. Romanian diplomats generally take foreign language classes after work, during one’s free time and without a compulsory linkage to the further selection for overseas posting. Only some languages—such as Arabic, Russian, Turkish or professional French—are offered through diverse programs developed with private-sector or specialized institutes, such as the French Institute in Bucharest.

Preparing for a Posting

Generally, the first two years as a member of the corps are spent with the MFA in Bucharest. This is the usual step required to become eligible for the annual selection process for overseas posting. As in the American system, the period between the posting of open positions and the actual decisions is quite intense.

Everyone who chooses to participate in this contest decides on their top choices and submits a three-bid short list to the Posting Committee. Overseas postings can last from six months to four years. The candidate’s experience, expertise, diplomatic rank, personal skills and knowledge of a rare foreign language are assessed by the Posting Committee and everyone is engaged, aiming to emphasize their best qualifications.

One climbs the diplomatic career ladder by participating in the annual promotion competition when the time comes. I have been through two competitions during the last eight years. After the fulfillment of the mandatory requirement of years of service, I submitted an individual written request for promotion (allowed for just one step up the grade scale), with a self-evaluation and a director’s evaluation each time. Once the submission is made, the nervous waiting begins in anticipation of the Promotion Commission’s assessment.

This year I will undertake this exercise again, in hopes of being promoted from second to first secretary, after four years of service since my last promotion.

For Romanian diplomats, the foreign language classes are generally taken after work, during one’s free time.

Every diplomat has personal motivations that lead him or her to embrace diplomatic work. My biggest motivation comes from feeling like my efforts help improve policy or open new doors in Romania’s relationship with a given country. Despite the engagement needed to do your job as well as you can, an important challenge remains: how to achieve a good work-life balance.

Aiming for such balance is essential when moving around the world every couple of years, which can take a toll on families. Spouses face challenges maintaining their own careers while moving the family and having the kids jump from school to school. There is no recipe for achieving the needed balance and, definitely, a case-by-case approach is needed. However, the bidding process for overseas postings plays a very important role.

I hope these glimpses of the way the Romanian diplomatic system works will help create new bridges and spark interest in discovering more about us. Those of us representing Romania and its citizens are fully committed to getting to know you better, and to being strategic partners and friends of the United States.

I have enjoyed sharing these thoughts about our diplomatic careers and lives that, in spite of certain differences, are so similar—whether one is working near the Potomac River in Washington, D.C., or the Dâmbovita River in Bucharest.

Diana Tase is a member of the Romanian Foreign Service. She currently serves as a legal adviser in the Directorate of International Law and Treaties in Bucharest. Ms. Tase joined the Foreign Service in 2006 and has previously served in Prague, Rome and Brussels. She was a Transatlantic Diplomatic Exchange Fellow at the State Department from October 2012 until September 2013.