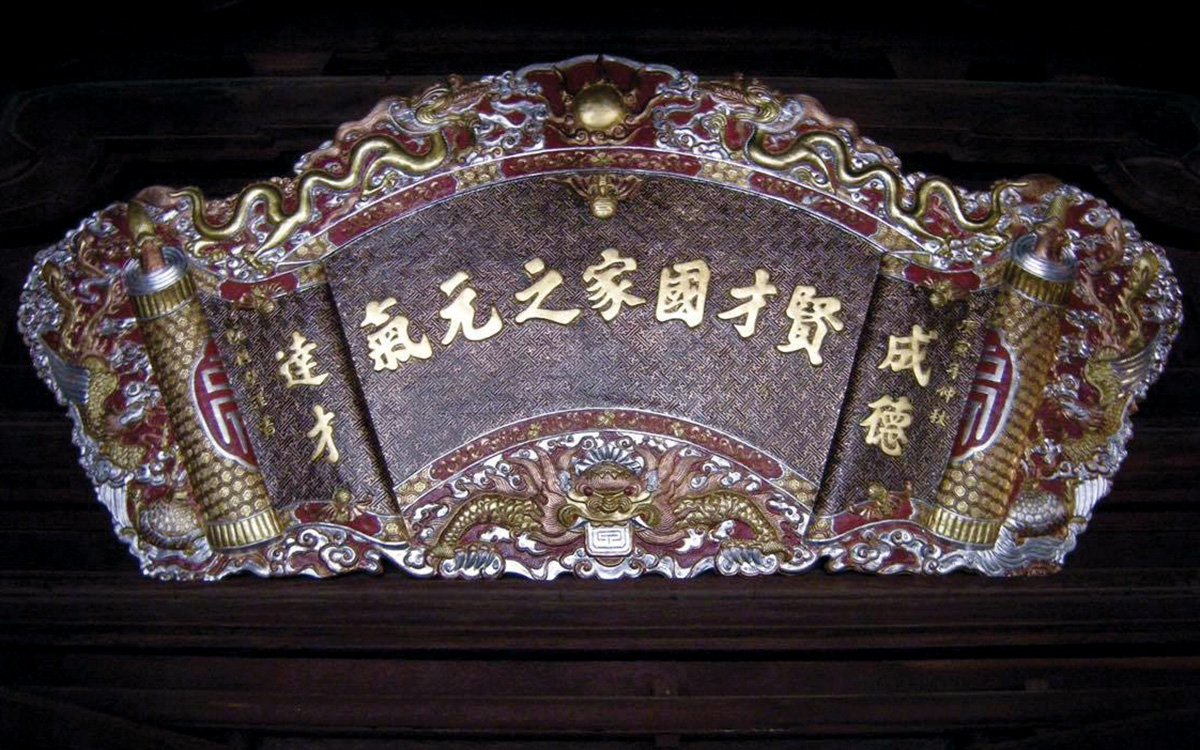 This carving in Hanoi’s 1,000-year-old Temple of Literature reads: “Virtue and talent are the soul of the state.”
David Shear

In the village of Duong Lam near Son Tay, west of Hanoi, is a quiet, terra cotta temple dedicated to a diplomat. A decorated scholar-official, Giang Van Minh served as Vietnam’s ambassador to China starting in 1637. He outsmarted China’s emperor, ending Vietnam’s annual payment of a heavy gold and silver tribute.

For his courage in standing up to the Chinese Goliath, Minh paid the ultimate price. China’s emperor took revenge by cutting out Minh’s tongue and eviscerating him. The emperor then had the diplomat’s body cast in silver and returned to Vietnam. China continues to represent an existential threat to Vietnam, as it has from the country’s birth as a nation.

The work of a diplomat can be perilous. But Giang Van Minh’s example offers another reminder, as well. Diplomats have a duty to advocate for their country’s interests overseas; they also have a second duty, which can be equally perilous: to advocate internally for wise policies and to challenge poor ones. Catastrophe can result when diplomats sidestep that duty or are unable to carry it out because the ruler cuts off dissenting voices.

In November 2016, shortly after Donald Trump’s victory in that year’s presidential election, I learned about the Confucian concept of the remonstrating official. While struggling with a decision about whether or not to leave government service, I received a message from Dave Shear, my predecessor as ambassador to Vietnam. Dave sent me a photo of a carving from Hanoi’s 1,000-year-old Temple of Literature.

The plaque reads: “Virtue and talent are the soul of the state.” Vietnamese scholars, like their Chinese counterparts, Dave explained, pursued the Confucian ideal that a loyalty exists that is greater than that to the emperor, and that loyalty requires officials to speak out when the emperor goes too far.

Confucius (551-479 BCE) taught his students to be loyal to the ruler, but also to stand up to the ruler when he (or she) was wrong. In the Confucian system, virtue sometimes required “remonstrance,” defined by Merriam-Webster as: (1) an earnest presentation of reasons for opposition or grievance; and (2) an act or instance of remonstrating.

Mencius (372-289 BCE) warned that, by standing up to the ruler, the “remonstrating official” risked death—swift execution or even a slow and painful death. In one instance, Emperor Wu of the Han dynasty punished Grand Historian Sima Qian for his dissenting views by offering the historian his choice of punishment: death or castration. Qian chose the latter.

Confucian scholar-officials would remonstrate with a ruler to help him become a better ruler, not to overthrow him in favor of another. They corrected the ruler out of a sense of loyalty, because their loyalty was to principles greater even than the person of the emperor (see Anita Andrew and Robert André LaFleur in Education about Asia, Fall 2014).

U.S. officials—civilian and military—swear an oath to “support and defend the Constitution of the United States against all enemies, foreign and domestic.” In our oath, there is no reference to a political party or individual leader. In a democracy, when policies are debated openly, there should be space for “remonstrance.”

The Need for Remonstrance

After World War II, the United States became obsessed with communism. In 1950, Senator Joseph McCarthy announced that he had a list of supposed communists working in the State Department. Theodore H. White describes in his masterful In Search of History (HarperCollins, 1978) what happened to the United States during the next decade, as the Cold War became Americans’ focus and McCarthyism had a significant influence on our political culture.

White showed how decimating the team of Foreign Service Asia experts—people who would have known about the history of enmity between Vietnam and China—left the State Department unprepared for the coming conflict in Southeast Asia, and contributed directly to the debacle of our engagement in the Vietnam War. Many of those whose knowledge would have caused them to remonstrate had been removed from office.

In the 1960s and 1970s, as the war in Vietnam dragged on, the United States experienced the disaster that can occur when officials do not know enough to remonstrate or, worse, choose not to do so. In 1995 Robert McNamara admitted that, as U.S. secretary of defense, he had known we were losing the war in Vietnam but did not say so. He publicly expressed his shame over the war’s conduct in In Retrospect: The Tragedy and Lessons of Vietnam (Vintage Books, 1996) and what many referred to as his “mea culpa” tour.

Diplomats also have a second duty, which can be equally perilous: to advocate internally for wise policies and to challenge poor ones.

In a meeting with his former nemesis, General Vo Nguyen Giap, McNamara acknowledged that the United States “gave short shrift to Vietnam’s strong nationalist tradition and aspirations,” Chester L. Cooper reported in the June 29, 1997, Washington Post. McNamara added that Americans “were held in thrall by the Domino Theory and our conviction that Vietnam was a potential steppingstone for China’s thrust into Southeast Asia.”

The Pentagon Papers show that McNamara knew as early as 1967 that the war was unwinnable, but he didn’t say this publicly. When confronted with this fact later, McNamara at first said that he had kept quiet out of respect for the president he served, Lyndon Johnson.

But even after becoming president of the World Bank and Nixon was in the White House, McNamara stayed quiet, attended Georgetown dinner parties and enjoyed his summers on Martha’s Vineyard while Americans and Vietnamese continued to fight and die. His interviews in the 2003 film “Fog of War” suggest that McNamara went to his grave tormented by the choices he had made.

Under Secretary of State George Ball took a different path. He urged President John F. Kennedy to remember France’s defeat at Dien Bien Phu and not to intervene in Vietnam. Then, under President Johnson, he argued against the 1964-1965 bombing of North Vietnam. In February 1965, he wrote a detailed, forceful memorandum (reprinted in The Pentagon Papers) to the president analyzing the situation in South Vietnam. He predicted (correctly) that escalating the conflict would be disastrous for the United States.

As a “remonstrating official,” Ball stood alone. Other senior advisers told the president what he wanted to hear. Johnson had concluded, as Stanley Karnow quotes him in Vietnam: A History (Viking Press, 1983): “Losing the Great Society was a terrible thought, but not so terrible as the thought of being responsible for America’s losing a war to the Communists.”

The other advisers fell in line and agreed with the president that he should double down in Vietnam. Bombing commenced on March 2, 1965. America paid a heavy price for that choice. President Johnson adhered to a domino theory that would not have withstood the scrutiny of people who understood Asia’s history. Their voices were not heard because in the zeal to rid the government of communists, McCarthy and his allies drove out people whose expertise in Asia was badly needed.

During President Bill Clinton’s administration, as the United States normalized relations with Vietnam, I saw firsthand how the president provided opportunities for debate and the airing of different views on important national security matters. I also saw firsthand during Barack Obama’s administration that the president sought out independent views. Presidents Clinton and Obama were confident enough to hear dissenting views, understanding that by airing those challenges to the consensus, better decisions could be reached.

The opportunity to remonstrate and the act of remonstrating are essential for good policy outcomes. After I left government service in late 2017, I admired the courage—and loyalty—shown by “remonstrating officials” such as Ambassadors Masha Yovanovitch and Bill Taylor, who demonstrated their loyalty to the Constitution. I was particularly moved when talented colleagues I had worked with closely, including George Kent and David Holmes, took huge career and personal risks to honor their oaths and speak truth to power.

Today, there is much discussion about the contest between democracy and authoritarianism. Especially after the events of Jan. 6, 2021, Americans are coming to realize how fragile democracy can be. Authoritarian governments have become more efficient at quashing dissent, which can lead to poor decisions for everyone, including authoritarian leaders.

A third of the world’s population now lives in countries where democratic governance is declining. According to the University of Gothenburg’s Varieties of Democracy indices, liberal democracies have diminished from 41 countries to 32 in the past 10 years, with a global population share of only 14 percent.

In the past 12 months, democratic reversals occurred in Myanmar, Hong Kong and Sri Lanka. The United States is withdrawing from Afghanistan, where America’s democracy-building exercise met grave challenges. Venezuela is in dire straits. Poland, Hungary, Brazil, Turkey and India are already, or are becoming, electoral autocracies.

Three hundred twenty-three names on the wall at the State Department’s C Street entrance attest to the dangers of serving one’s country as a diplomat. War, disease, accidents and state-sanctioned reprisals from foreign governments have cut short the lives of U.S. diplomats. While their bodies may not be cast in silver, the brave men and women of the Foreign Service know they face risks and possibly even death when serving overseas.

But as the example of George Ball shows—and as we have seen from the brave “remonstrating officials” of the past few years—dangers can come from one’s own government, as well. Those dangers are greatest in an authoritarian system, where the leader purports to know everything and leaves no room for dissent, as Grand Historian Qian learned.

Today, as democracy is in retreat in parts of the world, the remonstrating official is needed more than ever. Where there is still space for challenging conventional wisdom or for alternative policy approaches, the diplomat has an ability to raise tough questions and seek the best possible answers.

Today’s diplomats and those of the future must remember that loyalty is needed in the service of democracy and good policy, not to please an emperor. 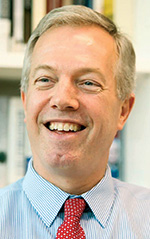 Ted Osius, a career diplomat with the State Department Foreign Service for 28 years, served as U.S. ambassador to Vietnam from 2014 to 2017. In October 2021, Rutgers University Press will publish his book, Nothing Is Impossible: America’s Reconciliation with Vietnam, with a foreword by John Kerry.