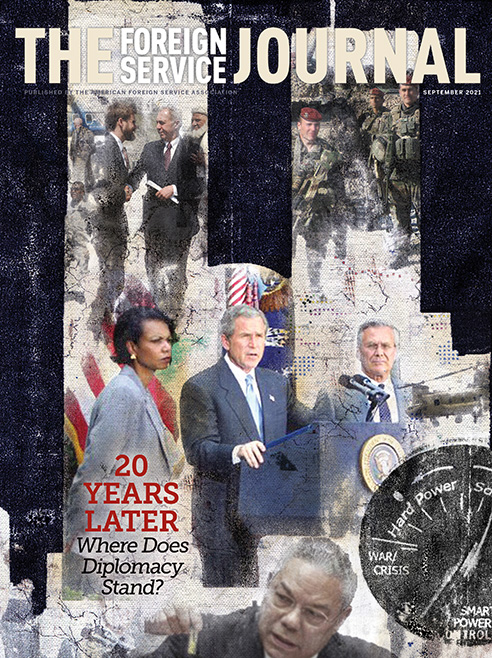 Getting Off the X

In a compelling personal account of the 9/11 attacks, one FSO offers tactics for surviving when catastrophe strikes.

The Global War on Terror and Diplomatic Practice

The war on terror fundamentally changed U.S. diplomacy, leaving a trail of collateral damage to America’s readiness for future challenges.

America and 9/11: The Real-World Impact of Terrorism and Extremism

In retrospect, 9/11 did not foreshadow the major changes that now drive U.S. foreign policy and national security strategy.

The Proper Measure of the Place: Reflections on the Afghan Mission

Drawing from two tours, a decade apart, a veteran diplomat explores the competing visions for Afghanistan.

Intervention: Unlearned Lessons, or the Gripes of a Professional

The State Department’s failure to effectively staff and run interventions has a long history. Four critical lessons can be drawn from the post-9/11 experience.

From the FSJ Archive: 9/11, War on Terror, Iraq and Afghanistan

As old as the United States itself, whistleblowing has protections worth knowing about.

BY ALAIN NORMAN AND RAEKA SAFAI

In the 1992 FSJ, Ambassador Joe Lake describes setting up the U.S. embassy in Ulaanbaatar. Today he and his son explore how that relationship was built.

Right of Boom: A Bomb and a Book

The Future of USAID: Three Scenarios