Though the Berlin Wall’s collapse left hardly a ripple on the surface of Yugoslavia’s day-to-day turmoil, it decisively affected the underlying course of events in the country.

Like the rest of the world, Yugoslavia watched the events of 1989 in neighboring Eastern Europe with fascination and astonishment. But by the time the Berlin Wall fell in November, Yugoslavia’s squabbling republics had traveled so far along the path toward dissolution that it left hardly a surface ripple on the spiraling downward course of domestic events that were to culminate 18 months later in bloody conflict. In reviewing personal meeting notes for this article from my 1987-1991 stint as political counselor in Belgrade, I found hardly any reference to the fall of the Wall.

Yet symbolizing as it did the rupture of the external Soviet empire and the collapse of communism as a ruling ideology, the crumbling of the Wall could not help but have a momentous impact on the underlying course of events in the country. By 1989 Josip Broz Tito had been dead for nine years, and the independent and relatively liberal version of communism he created in Yugoslavia was entering terminal decline. But while all across Eastern Europe people were shucking off Soviet-style Marxism- Leninism, what emerged from the wreckage of the Yugoslav experiment was nationalism.

Some among the Belgrade foreign policy establishment worried that events in Eastern Europe would deprive Yugoslavia of its distinctive, balancing role in Cold War politics. That concern turned out to be well founded, as the United States and Europe, preoccupied with developments elsewhere, failed to engage effectively as the country descended into war.

Early in 1989, riding a wave of what we might now call nationalist populism, Serbian strongman Slobodan Milosevic had illegally and violently crushed the autonomy of the Albanian-majority province of Kosovo, which the rest of Yugoslavia took as a foretaste of what they might expect should Milosevic succeed in taking control of the country as a whole. In June I had watched Milosevic, in Kosovo for the 600th anniversary of the defeat of the medieval Serbian empire by the Ottoman Turks, tell a million visiting Serbs that violent conflict could be ahead, a prospect the crowd greeted with a roar of approval.

In November, as the rest of the world was transfixed by the images of young Germans climbing triumphantly atop the crumbling Berlin Wall, Yugoslavia was preoccupied by Milosevic’s efforts—ultimately unsuccessful—to stage the kind of populist uprising in liberal Slovenia that he had successfully employed in three other Yugoslav federal entities, which had put him on the verge of capturing the collective federal presidency that controlled the country’s military and police.

As Moscow’s power visibly crumbled, the fear that Soviet tanks might one day clank down the streets of Yugoslavia, as they had in Budapest in 1956 and Prague in 1968, vanished. And with it went a powerful, if usually unspoken, force for unity among Yugoslavia’s fractious ethnic groups. In my first overseas Foreign Service post, Zagreb (1974-1976) resentment simmered just below the surface at Tito’s heavy-handed suppression of a 1972 national upheaval known as the Croatian Spring. But even friends who made no secret of their hope to one day see an independent Croatia conceded their gratitude for Tito’s successful defiance of Soviet dictator Josef Stalin in 1948, the defining moment in the creation of Yugoslavia’s independent brand of communism.

All of the former Yugoslav republics have assumed the trappings of democracy, but it remains a fragile implant.

The decline of Soviet power also weakened the resolve of conservative elements in Yugoslavia. The Yugoslav military saw itself as the ultimate defender of Yugoslavia’s independence and its communist system in equal measure. It reacted to the collapse of communism across Eastern Europe in 1989 and the growing turmoil and weakness in Mikhail Gorbachev’s USSR with a kind of angry disbelief that ultimately led it to play a destructive role in the tragedy of Yugoslav disintegration. In one of its first issues after the Berlin Wall’s fall, the army’s newspaper gravely warned that nothing had changed in the military’s determination to defend socialism in Yugoslavia.

The spectacular collapse of ruling communist parties across Eastern Europe also affected the League of Communists of Yugoslavia, the country’s only party since 1945. Even before 1989, belief in the Yugoslav model of “self-management socialism” was crumbling. In those limited areas where small-scale private enterprises were beginning to be tolerated, they were universally considered to be superior. When I lost a tooth filling, Yugoslav friends warned me gravely to use one of the new private dentists and not a “self-management” type. In January 1990 the LCY effectively vanished when the Slovenian party walked out of what turned out to be the last party congress, and the remaining republics effectively blocked Milosevic’s efforts to take over the rump body.

The communist parties in Yugoslavia’s republics, where the real locus of power lay, reacted in different ways to the events of 1989. A liberal Slovene party faction was strengthened in its already ongoing efforts to transform itself into a social-democratic party, a trend which helped propel Slovenia toward secession in June 1991. In Croatia, a reformist group seized control of the party shortly after the fall of the Wall and announced its support for multiparty elections—which it resoundingly lost five months later to Franjo Tudjman’s Croatian nationalists, adding yet another disintegrationist element to the Yugoslav brew.

There were, of course, elements within Yugoslavia who took inspiration from the events of 1989 and hoped to emulate the success of liberal East European reformers. During 1989 and 1990 Yugoslavia’s last and greatest prime minister, Ante Markovic, tried unsuccessfully to create a united market economy. Markovic enjoyed enormous prestige across the country for having stopped a burst of hyperinflation that rivaled that of 1923 Germany. In January 1990, when the LCY collapsed, a smiling Markovic announced: “Yugoslavia will survive.” His liberal reforms failed because republican leaders, primarily interested in promoting their own separatist agendas, cooperated to block the emergence of a powerful rival at the federal level.

Portents of Hope and Danger 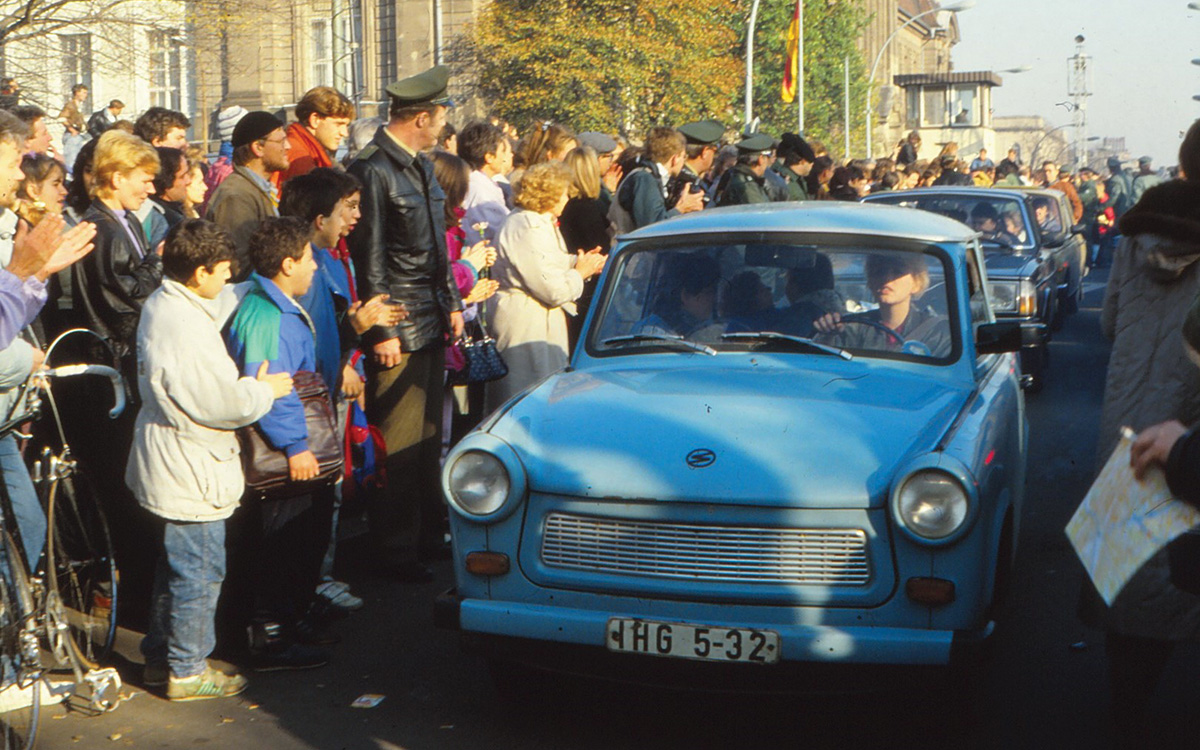 Baby-blue “Trabis” line up to cross the border from East to West.
Michael Hammer

Preoccupation with Yugoslavia did not prevent diplomats there from being drawn to the astonishing events unfolding in neighboring countries. In Europe 1989 was the “summer of the Trabi,” when, just to the north of Yugoslavia, thousands of East Germans flooded across Hungary’s suddenly open borders when the Berlin Wall fell, many in diminutive Trabant autos known variously as a “sardine can on wheels” or a “plastic tank.”

One evening while this was going on, after a relaxed family dinner, a European diplomatic colleague and I tried to sum up our impressions of events in neighboring Hungary and beyond. Both of us had long experience in the USSR, as well as Eastern Europe; and, after carefully analyzing all of the options—our deliberations no doubt aided by some excellent wine—we concluded that the communist system was bound to disappear across the region since the people had lost any pretense of belief in it, and local parties were losing control of events.

Armed intervention seemed the only way to preserve the communist system, but that option was implausible given events then unfolding in Gorbachev’s USSR. At the end of a long evening, we agreed that our analysis was impeccable, no matter how improbable the putative end point then seemed. I cannot speak for my colleague, but I never sent in that cable announcing to Washington the imminent demise of the communist system across the region—and, as far as I know, Washington never seemed to notice its absence.

A few months later the only violence in the 1989 East European revolutions began in Timisoara, Romania, just across the Yugoslav border. Yugoslav journalist friends returned from reporting events there with two impressions: One was the murkiness of who was actually behind the bloodshed, and another was a deep worry that similar violence could occur at home.

In 1990 each of the six Yugoslav republics held multi-party elections, the first since before the Second World War. I observed most of them, and the experience was among the most moving in my Foreign Service career. No one who has ever had the opportunity to witness people standing with patient enthusiasm in long lines to vote for the first time in their lives, when it would actually make a difference, could ever doubt the power of democracy as an ideal.

The victory of ethnically oriented parties in most of these Yugoslav republican elections was an unfortunate result of decades of communist rule drying up virtually every other option. As one of my Croatian friends somewhat shamefacedly told me: “The new communists are actually an attractive option, but after half a century of them in charge I just can’t bring myself to support them in our first democratic election.”

The promise of democracy was inspiring, but competing ethnic visions among the victors in different republics plunged much of Yugoslavia into years of bloody ethnic conflict. Belated outside intervention and a sense of mutual exhaustion with the bloodletting eventually brought a sometimes-troubled peace. All of the former Yugoslav republics have assumed the trappings of democracy, but it remains a fragile implant. As in many other areas the forms of democracy—elections, political parties and the rule of law—risk being subverted by corruption and creeping authoritarianism.

Thirty years after the fall of the Berlin Wall, there is legitimate ground for disagreement on what needs to be done to overcome the current time of troubles in many democratic systems. But surely an important element is to understand and recommit ourselves to belief in the inspirational power of democracy that we observed in 1989. 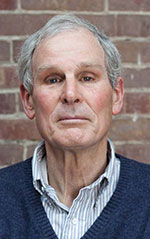 During a 27-year career with the State Department, retired FSO Louis D. Sell served for many years in the former Soviet Union, Russia and Yugoslavia. From 1995 to 1996, he served as political adviser to the first High Representative for Bosnian Peace Implementation. In 2000 he served as Kosovo director of the International Crisis Group. As executive director of the American University in Kosovo Foundation from 2003 to 2008, he helped found the American University in Kosovo. He is the author of From Washington to Moscow: U.S.-Soviet Relations and the Collapse of the USSR (Duke University Press, 2016) and Slobodan Milosevic and the Destruction of Yugoslavia (Duke University Press, 2002). Mr. Sell is now an adjunct professor at the University of Maine at Farmington and lives on a farm in Whitefield, Maine. 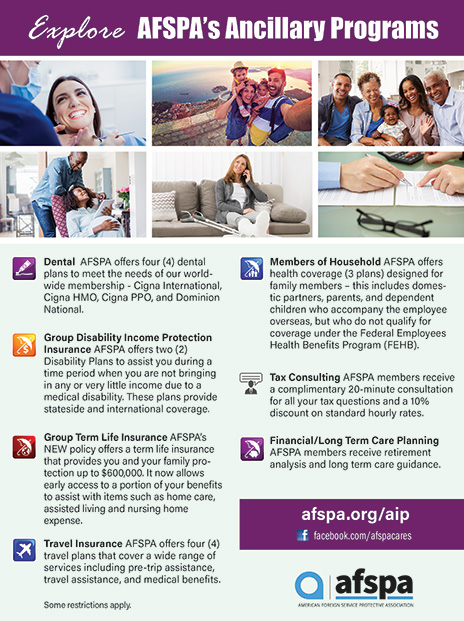