A Past Not So Distant

The Foreign Service Journal > November 2019 > A Past Not So Distant

Throughout my childhood, Christmas excitement was wrapped in the traditions my family had established at our first overseas post, West Berlin, in 1973. Included were chocolate coins, advent wreaths and a German pyramid.

No matter our locale, whether in the Congo or the United States or Mexico, we placed a red wax candle in an east-facing window on Christmas Eve, meant to show family and friends who were just out of reach that they weren’t forgotten.

On Christmas Eve in 1988, that huge candle finally burned out, in our family room in Kinshasa, not long before the Berlin Wall came down.

We were a very young family when we arrived in West Berlin. My parents had only been married a couple of years, and I was 12 weeks old.

Since I was so young, my memories of our five years in Berlin come as impressions, not stories. I remember carrying a blue paper lantern at the end of a wooden dowel on St. Martin’s Day.

I remember standing in line to buy ice cream from the truck that stopped near the housing playground, my mom digging pfennigs out of a red plastic coin purse so I could pay for it.

I remember a ride on the duty train from West Berlin to Frankfurt and a vendor’s voice singing out “Orange juuuuuice! Apple juuuuuice! Peeeeepsi Colaaaa!”

And I remember the wall—bright, colorful and noisy on our side; gray and quiet on the other.

I remember our drives through East Germany to West. Soldiers and checkpoints and stopping to wait. Young Russian guards peered into our car as we waited and waited while Dad presented his flag orders and filled out the paperwork that would allow us to leave Berlin for a while.

My brother and I used to roll down the window just an inch and slip the guards Oreos, which they’d quickly hide in their pockets, paying us for the contraband with surreptitious smiles.

The wall, the borders and those checkpoints—and all the not-so-physical barriers that came with them—meant tension to me. They meant worry, and grumpy adults, and having to stay still and quiet when I wanted to run and wave and shout questions.

I didn’t know anything about global politics, or realize that I was living my Western life on a tiny island surrounded by the East. But I understood those feelings, and I remember them.

Forty years later, I find myself living on what was once the “Other Side,” having traded the Southeast Asian riots of color of our most recent postings for the long, gray winters of Warsaw.

Warsaw in 2019 is certainly not West Berlin in the 1970s, but there are echoes that awaken those memories … the crusty bread, the accompanying schmaltz (smalec here in Warsaw) and the leafless trees in the parks during wintertime.

Maybe it’s the playgrounds at the center of apartment blocks that remind me of looking up from the sandbox to find my bedroom window, the one covered in foil to keep out the early summer sun. Maybe it’s the stoicism I find in the Polish people, the sense of endurance and of a heavy past, not very distant. Or maybe it’s simply the bright graffiti on gray walls, reminding me of a similar contrast in colors from so long ago.

This part of Europe is a different place now, with open borders and freedom of movement. I can drive from my house in Warsaw to Berlin in less than six hours. There are no more checkpoints, no more time limits. But this place is also where memory is long, and the past is somehow always present.

I recently sat at a coffee shop with a Polish woman who made frequent East- West crossings all those years ago. She shared some stories and I shared some memories; and those feelings bubbled up again—some bitter for her, others full of tension for me.

I told her it was so long ago, and I was so young, that I can’t be sure that my impressions are real. Maybe I imagine I remember these things.

And we cannot forget. 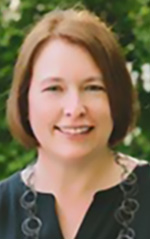 Amy Cragun Hall currently works as a CLO coordinator at the U.S. embassy in Warsaw. She and her husband, Consular Officer John Hall, have also served in Bangkok and Chennai. Amy grew up in a military and Foreign Service family in Berlin, Kinshasa, Mexico City and Santiago. She is happy to be raising second-generation third-culture kids.