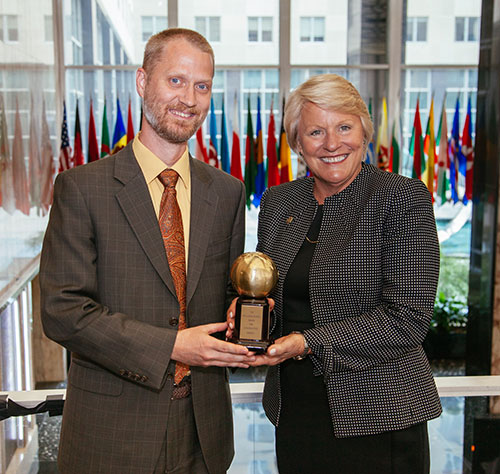 For close to half a century, AFSA has sponsored a program to recognize and encourage constructive dissent and risk-taking in the Foreign Service. This is unique within the U.S. Government. The Director General of the Foreign Service is a co-sponsor of the annual ceremony where the dissent awards are conferred. AFSA is proud to have upheld the tradition of constructive dissent for these many years, and we look forward to our ongoing role in recognizing those who have the courage to buck the system to stand up for their beliefs. Each year, AFSA calls for nominations of those who have had the courage to dissent within the system, and each October we give out these awards in a ceremony at the Department of State.

The dissent awards are overseen by Theo Horn, AFSA’s Awards and Scholarships Manager. He is available at horn@afsa.org and (202) 719-9705.

Criteria for the Dissent Awards

The awards are for Foreign Service employees who have “exhibited extraordinary accomplishment involving initiative, integrity, intellectual courage and constructive dissent”. The awards publicly recognize individuals who have demonstrated the intellectual courage to challenge the system from within, to question the status quo and take a stand, no matter the sensitivity of the issue or the consequences of their actions. The issue does not have to be related to foreign policy. It can involve a management issue, consular policy, or, in the case of the recently established F. Allen “Tex” Harris Award, the willingness of a Foreign Service Specialist to take an unpopular stand, to go out on a limb, or to stick his/her neck out in a way that involves some risk. Nominees may or may not have used the formal dissent channel. Recipients receive a trophy as well as a $4,000 cash prize. Click here to read more about what constitutes dissent.

Will Dissenting Hurt My Career?

Absolutely not. AFSA has honored dozens of dissenters through the decades, and we would be hard pressed to find one whose career was negatively affected as a result. In fact, many have gone on to long and successful careers in the Foreign Service. A list of past recipients includes such well-known officers as John W. Limbert, Ryan Crocker, Michael Guest, Jeffrey Feltman (former Under Secretary at the United Nations), Mark Pekala, Thomas Daughton (former Ambassador to Namibia), Thomas Kelly (former Ambassador to Djibouti), Douglas Silliman (former Ambassador to Iraq), Luis Moreno (former Ambassador to Jamaica), Daniel Russel (former Assistant Secretary for East Asian and Pacific Affairs), Eric Rubin (current AFSA President), Frontis Wiggins (former Chief Information Officer at the Department of State) and Geoffrey Pyatt (current ambassador to Greece). For more details on any career implications from dissent, please see Shawn Dorman's September 2013 article on the amazing careers of some of our previous winners, or Francesca Kelly's January 2010 piece from the Foreign Service Journal, "Does Dissent Harm Your Career?"

Nominations should be submitted through the AFSA website no later than Tuesday, May 17, 2022. Any questions can be directed to Theo Horn, Awards and Scholarships Manager, at horn@afsa.org or (202) 719-9705.

Note: The State Department's Dissent Channel and USAID's Direct Channel are unrelated to AFSA's dissent awards. We welcome any discussion and encouragement of dissent within the foreign affairs agencies, but messages sent through these channels will not necessarily come to AFSA's attention unless cited in a nomination.