AFSA is proud to maintain the memorial plaques in the Department of State's C Street lobby, which honor our colleagues who gave their lives in circumstances distinctive to overseas service. 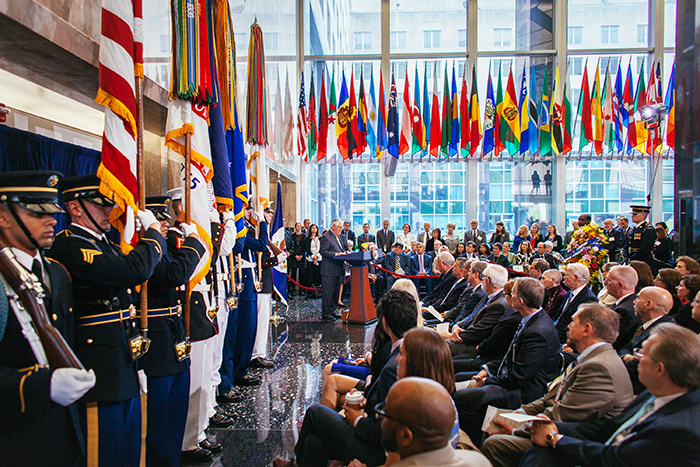 The establishment of these plaques grew out of AFSA’s efforts starting in the late 1920s to establish a "Roll of Honor" of colleagues who had died in circumstances distinctive to overseas service, including due to violence, natural disasters, tropical diseases, and accidents during official travel. The first memorial plaque was unveiled on March 3, 1933, by Secretary of State Henry Stimson at the entrance of what is now the Eisenhower Executive Office Building, standing next to the White House, which then housed the State, War and Navy Departments.

The original plaque was moved to its current location in the west end of the diplomatic lobby of the Department of State in 1961. A second plaque was erected during the Vietnam War at the east end of the lobby. As deaths continued, four side panels were added to the two large plaques in 1985. In 2021, six new panels were placed on lobby columns to provide space for future inscriptions. AFSA owns and maintains the plaques, as authorized by a joint resolution of Congress in 1933. For a detailed history of AFSA's memorial plaques, click here.

The first name honored is that of William Palfrey, chosen by the Continental Congress as Consul General to France, whose ship set sail in 1780 and was never heard from again. Each May, AFSA organizes a memorial plaque ceremony in cooperation with the Department of State where the names of newly fallen colleagues are unveiled, or existing names are commemorated.

As of May 2022, there are 321 names inscribed on the plaques. Click here to view details of their service to our nation. As historical research uncovers additional cases of early colleagues who died in circumstances distinctive to overseas service, they are being memorialized on a Virtual AFSA Memorial Plaque.

The original plaque honored early diplomatic and consular officers and, starting with the founding of the Foreign Service in 1924, Foreign Service officers. After World War II, the plaque became open to Foreign Service personnel of all ranks. In 1982, eligibility was expanded to include U.S. Government employees of other agencies serving at embassies. However, due to the sharp increase in the number of non-Foreign Service civilians serving abroad from agencies that have their own memorials to fallen employees, the AFSA Governing Board in 2006 re-instituted the original plaque criteria. Future inscriptions are limited to Foreign Service members who die in circumstances distinctive to overseas service. Please click here to view the criteria. If you wish to submit a name for consideration, please fill out this form.