A seasoned diplomat considers this question in light of his own experience. 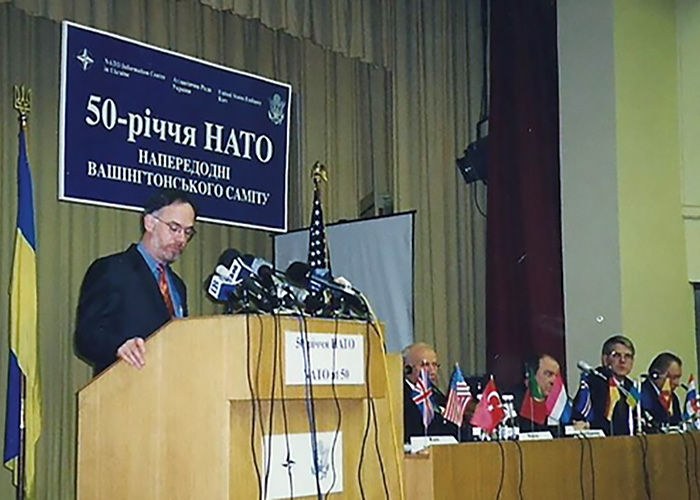 Principal Deputy to the Ambassador-at-Large and Special Adviser to the Secretary of State for the New Independent States of the Former Soviet Union Ross Wilson addresses a conference marking the 50th anniversary of NATO in Kyiv, 1999.
Ken Moskowitz

In March 1999, while serving as the press attaché at the U.S. Embassy Kyiv, I hosted a full-day international conference to mark the 50 years since NATO was established. Speakers included Secretary of the Ukrainian National Security Council Volodymyr Horbulin, U.S. Ambassador to Ukraine Steven Pifer, U.S. Principal Deputy to the Ambassador-at-Large for the New Independent States Ross Wilson, the chairman of the British parliamentary committee on national security, and Sergei Karaganov, a leading Russian expert on foreign policy who is now a close adviser to Russia’s President Vladimir Putin.

One could argue that the goal of such a conference sponsored by the American embassy was to promote NATO expansion, particularly to urge Ukraine to join the Western alliance. But that is not how I remember it. Typically, U.S. government public diplomacy like this does not bluntly advocate, but rather presents information or views that would be new to our local audiences. A more forceful NATO appeal for membership for Eastern European countries, including Ukraine, emerged from the NATO summit in Bucharest in April 2008.

At our conference on NATO in 1999, divergent views were expressed, but there was no outright opposition. The Western speakers tended to celebrate NATO’s notable success at keeping Europe at peace since the end of World War II. Even Karaganov, with close ties to the then-leadership, President Boris Yeltsin, did not raise a red flag. The Russian leadership did, however, object strongly to encroachments on Russia’s sphere of influence. This was also the decade in which NATO was promoting the “Partnership for Peace” for coordination with NATO programs and possible eventual membership. At the time of the conference, Poland, Hungary, and the Czech Republic were all on the verge of becoming NATO members, the first of 14 former Soviet-dominated countries that would eventually join the alliance.

The Issue of NATO Expansion

Twenty-three years later, President Putin has made Ukraine’s preliminary steps to joining NATO the principal grounds for the Russian invasion of Feb. 24, 2022. The alliance’s leaders have always made clear that it is up to each European country to make its own decision about membership. But the eastward expansion of NATO particularly inflamed Putin, who has claimed that Secretary of State James Baker and other Western leaders assured Soviet President Mikhail Gorbachev in 1990, at the time a unified Germany joined NATO, that the alliance would expand “not one inch eastward.”

George Kennan would surely have understood Putin’s reaction. The architect of the “containment” policy toward the Soviet Union wrote in 1997 that “expanding NATO would be the most fateful error of American policy in the entire post–Cold War era.” Kennan continued: “Such a decision may be expected to inflame the nationalistic, anti-Western and militaristic tendencies in Russian opinion; to have an adverse effect on the development of Russian democracy; to restore the atmosphere of the Cold War to East-West relations; and to impel Russian foreign policy in directions decidedly not to our liking.”

Putin believes that Russia rightfully deserves a sphere of influence in its “near abroad.”

Kennan never convinced President Bill Clinton or his Russia adviser, Strobe Talbott. And the remarks of Secretary Baker or NATO leaders could be discounted because they were never part of a treaty or formal agreement. But Putin nevertheless claims that the West betrayed Russia in the post-Soviet period because much of Eastern Europe, in fact, joined NATO. And this is at least part of what motivates his aggression now.

In any case, this putative betrayal does not carry the weight of a violation of a formal agreement, a violation of which Putin himself is guilty. By signing the Budapest Memorandum on Security Assurances in 1994, the Russian Federation promised not to threaten or use military force or economic coercion against Ukraine, Belarus, and Kazakhstan. As a result of this and other agreements, Ukraine gave up its nuclear weapons and acceded to the Non-Proliferation Treaty as a non-nuclear state. It is now paying the price for trusting Russia to honor its international commitments.

During my tenure in Kyiv, State Department–sponsored public opinion polling never showed a majority of Ukrainian public support for NATO membership. Private sector polling showed that as late as 2012, only 28 percent of Ukrainians wished to join NATO. Not surprisingly, pro-Russian sentiment was stronger in the east, but the largest plurality was for neutrality. The 2014 Russian seizure of Crimea and the fomenting of a violent separatist movement in eastern Ukraine sharply shifted Ukrainian public opinion. A poll by the Democratic Initiatives Foundation in June 2017 found 69 percent supported joining the alliance.

Putin has promoted a narrative that the Western alliance took advantage of the chaos and weakness of Russia in the 1990s, and somehow pressured its former Warsaw Pact allies into joining NATO. But this was not the case at all. Having served in U.S. embassies for many years in communist Hungary (1986-1989) and later in post–Soviet bloc Ukraine (1997-1999) and Bulgaria (2009-2012), it is clear to me that Russia has mostly itself to blame for the alienation of its former allies.

As in the Kyiv NATO conference cited above, Western officials hardly took the initiative to strong-arm Eastern European countries into joining. On the contrary, starting with Hungary and Czechoslovakia, these former Soviet satellites whose aspirations for autonomy had been crushed by Soviet tanks (Budapest 1956, Prague Spring 1968) saw NATO membership as a shield from a future round of attacks from Russia. A wise post-Soviet Russian government policy would have been to issue swift and credible assurances that the era of Soviet-style suppression of true independence was past forever, and to implement that with concrete measures to reduce the threat perception.

Russia for its part would have benefited by reducing its burden of military expenditures. But Russian policy in the Putin years turned increasingly aggressive, beginning with the attack on Georgia in 2008, and then the annexation of Crimea, instigation of separatism in the eastern Donbas region, and the start of a troop buildup on the Ukrainian border in early 2021.

Legalistic arguments may not be as wise as respect for and careful attention to powerful countries.

Even as Russia failed to take actions that would have eased tension in the region, NATO leaders emphasized that, based on the United Nations charter and international law, each sovereign European country has the right to choose its own alliance partners. Although correct in law, this policy may not have been prudent.

As China’s President Xi Jinping told President Biden on March 18, quoting a Chinese proverb: “He who tied the bell to the tiger must take it off.” His point was that legalistic arguments may not be as wise as respect for and careful attention to powerful countries. Implicit also is a traditional conception of international relations, which is that major powers control spheres of influence and that smaller powers must accept them.

A Russian Sphere of Influence

According to Stephen Kotkin, a professor of Russian history at Princeton University, Putin believes that Russia rightfully deserves a sphere of influence in its “near abroad.” To Putin, Ukraine is not a state because it is not sovereign. Small or weak states are only instruments in the hands of the great powers. Where we see Moscow’s aggression, Putin sees defense. If Russia cannot control Ukraine, then the West will. Thus, countries like Ukraine become platforms for invasion. And then the West will dismember Russia as the USSR was dismembered.

This way of thinking in Russia goes back to the tsars. Russia has no natural borders on its periphery. Stalin believed that without hegemony in Eastern Europe he would be subject to infiltration and subversion. But the peoples of Eastern Europe did not want to be forced to live under communism, and thus arose the very hostility Stalin feared.

In a similar vein and updating this explanation of Soviet aggression, my Ukrainian friends offer another rationale for Putin’s attack. As an autocratic leader who has denied his people the human rights we in the West enjoy, such as a free press, an honest judiciary, and especially genuinely contested elections, he is threatened by a liberalizing Ukraine right on his border. After all, Putin’s 22-year tenure rests on banning free and fair elections, stifling dissent, and controlling domestic media, along with official propaganda that excoriates Western institutions and values.

A Basis for Peace?

I believe that any lasting peace settlement in Ukraine will have to address these two apparent causes of Russian aggression. There is the historically rooted sense of a threat from the border regions and the more recent threat of new and insidious ideas of an open and democratic society. A settlement may have to include a Ukrainian promise of neutrality, at least over a period of years, and the commitment not to host joint military exercises with NATO. But I don’t believe that Ukrainians will accept any change in their liberal, Western-oriented society.

In the end, events on the battlefield will determine whether Putin achieves such political concessions. There is evidence that he understands the potent Ukrainian nationalist sentiments in the west of the country, and he seems to be learning that pro-West, pro-Europe views are strong in the central and eastern regions too. This may explain Russia’s abandonment of the attack on Kyiv and concentration on the Donbas and the region between there and Crimea.

With military success, Putin could annex more of Ukraine, but this would gain him a forcefully incorporated, long-term insurgent region. For example, the series of explosions in August of a Russian military base in occupied Crimea that destroyed eight Russian warplanes is early evidence of a possible Ukrainian strategic shift from reliance on a conventional army to more guerrilla tactics by local partisans. A military stalemate and eventual withdrawal of his forces now seem more likely, which would give Putin his minimal objective of a neutral Ukraine. Less likely, I would guess, would be a decisive Ukrainian victory, probably achieved over a protracted period of conflict, which would preserve the clearly West-oriented Ukrainian state and remove the threat of another Russian invasion. 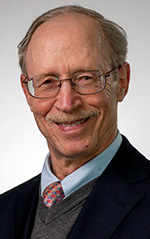 Ken Moskowitz served in the Foreign Service for 30 years. He holds a Ph.D. in theatre arts from the National Academy of Theatre and Film Arts in Sofia, Bulgaria, and is a former director of the Tokyo American Center. He is an adjunct professor of political science at Temple University’s Japan campus. This is an expanded and revised version of an article that appeared in the May 2022 edition of the American Diplomacy online journal. 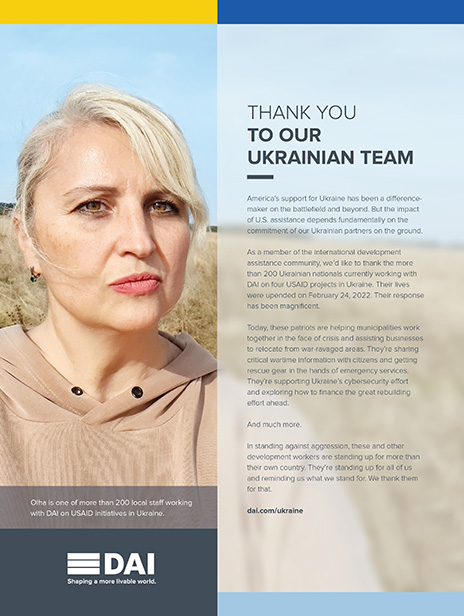