The October issue focuses on Ukraine. 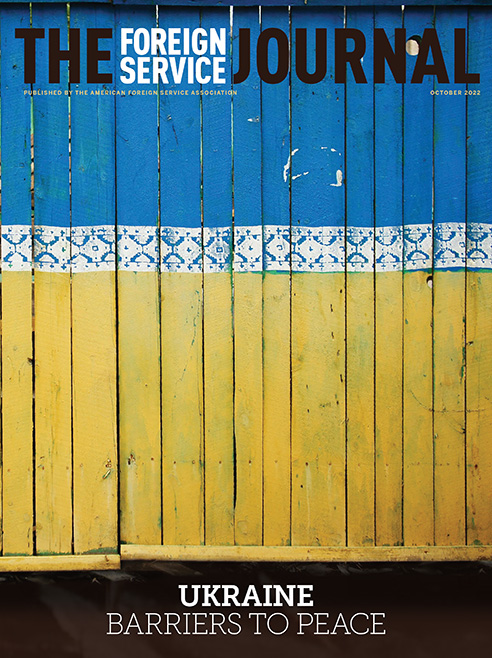 Ukraine captured world attention when Russia invaded in February. Here, an FSJ Q&A with a former ambassador to Ukraine sheds light on this vexing international crisis.

BY WILLIAM B. TAYLOR

A seasoned diplomat considers this question in light of his own experience.

Should Ukraine Have Kept Nuclear Weapons?

The Russian invasion threw the Budapest Memorandum’s efficacy into question. Here are thoughts from a lead negotiator for that important arms control milestone.

Though the war remains far from over, the scale and complexity of the Ukraine reconstruction effort require stakeholders to plan now, this commercial diplomat explains.

FSO Selection: Changing the Path to the Oral Assessment

No longer a pass/fail gateway to the Foreign Service, written test scores will be considered with other factors evaluated by means of a complex algorithm at the Qualification Evaluation Panel stage.

Language Testing Reforms: What You Need to Know

The first major changes to language testing in a half-century are underway. Here’s the story.

BY DAVID B. SAWYER

WikiLeaks Damage Lives On: The Case of Marafa Hamidou Yaya

Off-Road with the Foreign Service

The Remarkable History of the FS Grievance System