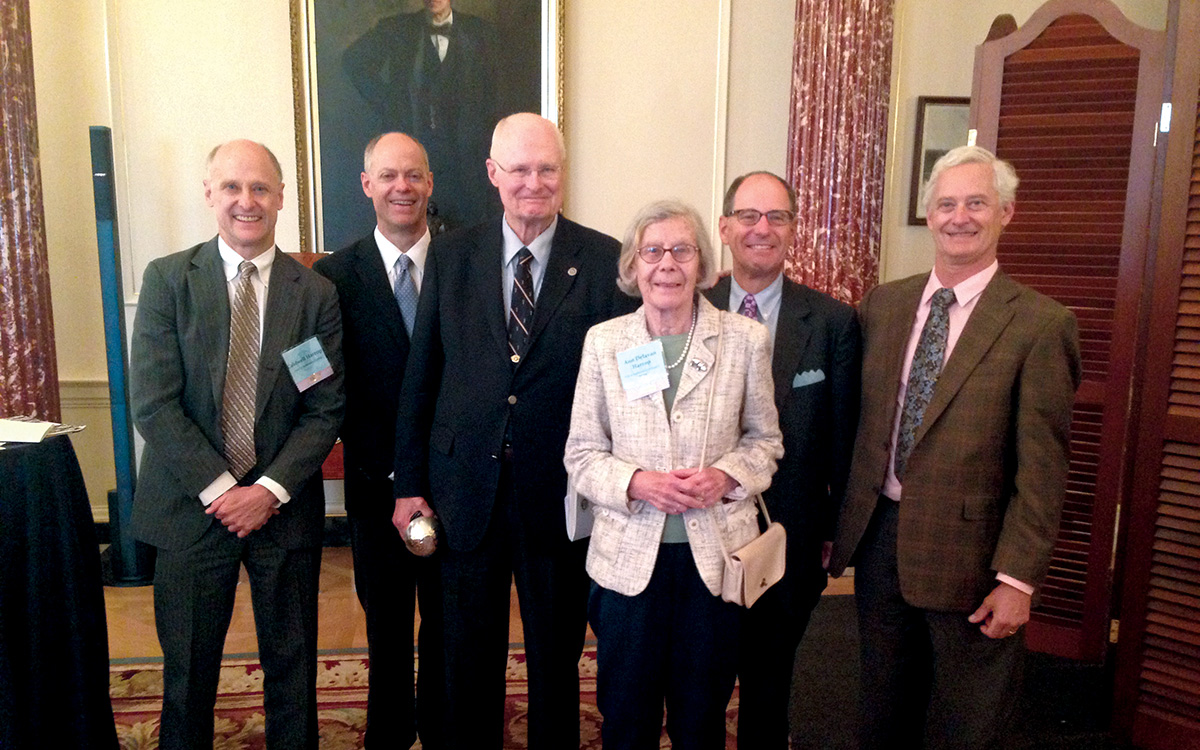 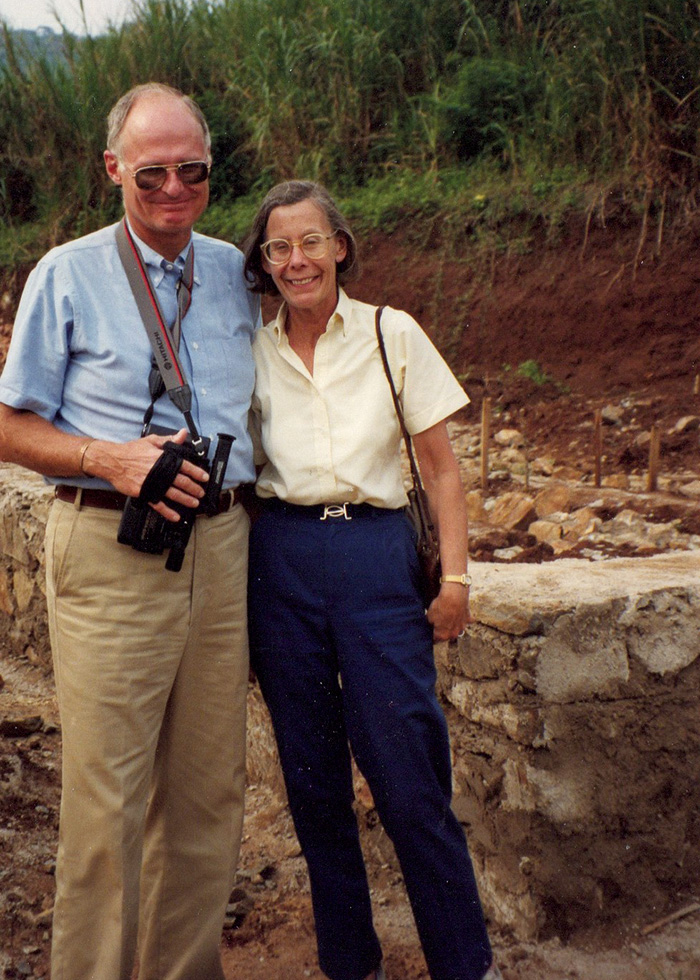 Many in the Foreign Service will know Ann Delavan Harrop’s name well, testimony to the accomplished diplomatic career of her Foreign Service officer and Career Ambassador husband, William C. “Bill” Harrop. Her long and rich life was inextricably intertwined with Bill Harrop, their family, the Foreign Service, and her beloved dogs—devoted companions from childhood on, including in the Foreign Service. Many recognize her as the professional she was, a Foreign Service spouse who served alongside Bill—from the United States to Europe, Africa, Australia, and the Middle East, including five ambassadorial appointments, from the 1950s through the 1990s.

Some have a closer and more personal connection with Ann. They know how she raised their four sons, Mark, Caldwell, Scott, and George, in difficult and often dangerous environments. They know how unfailingly kind and welcoming a hostess she was, and how impressively she dealt with her gradual but inexorable loss of vision, starting in her forties, over a long and productive Foreign Service career, with never a word of complaint and in a manner that left many unaware. Loss of vision did not lead her to abandon the piano and her years of lessons; instead, she memorized and played quite a repertoire of Bach, Beethoven, Mozart, and Schumann.

When I was a teenager, the daughter of an FSO, I recall “babysitting” for two Harrop boys when our parents lived on the same street in Brussels in the early 1960s. But then, as happens in the Foreign Service, I did not reconnect with the Harrop family until decades later in Washington, by which time the two boys had become four and the grandchildren six.

Many also know and appreciate Ann Delavan Harrop through the Nelson B. Delavan Foundation. Her grants to Foreign Service organizations over many decades supported numerous initiatives aimed at preserving, presenting, and sharing the legacy of the U.S. Foreign Service and American diplomacy.

In 1993, after Ann and Bill retired from active duty, they continued their “partnership in service” to the Foreign Service by applying their combined diplomatic experience, knowledge, and perspectives to the thoughtful selection of recipients of Nelson B. Delavan family foundation grants. This small nonprofit trust, established that year by Ann’s mother in honor of her father after the manufacturing company he founded was sold, provided a means to contribute to causes that Ann and Bill agreed were worthy.

Through the Delavan Foundation, they made generous annual contributions to the American Foreign Service Association, the American Academy of Diplomacy, DACOR, the Senior Living Foundation, the Association for Diplomatic Studies and Training, the online publication American Diplomacy (www.AmericanDiplomacy.org), and the National Museum of American Diplomacy. The Delavan Foundation became a well-known and respected patron and force multiplier for the Foreign Service as a professional diplomatic service and as an institution, making a real difference. 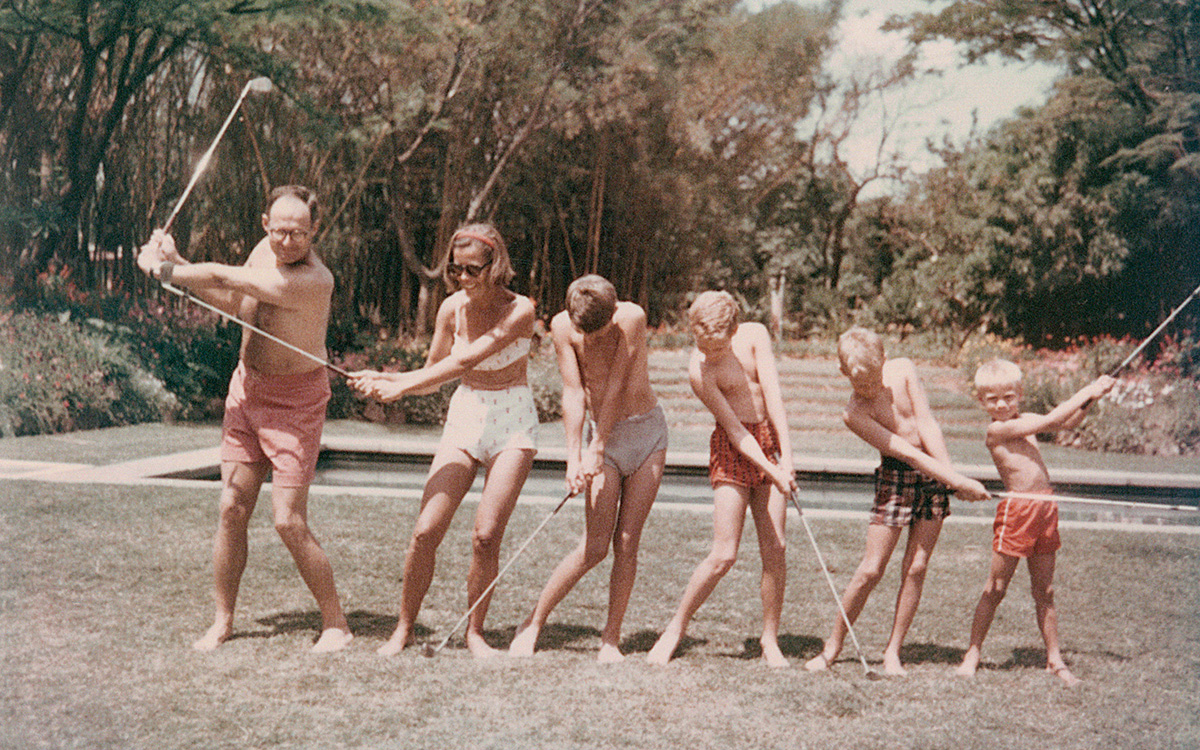 The family teams up to demonstrate a time-lapse golf swing in Lubumbashi, Democratic Republic of the Congo, during the 1960s.
Courtesy of Bill Harrop

Among grant recipients have been AFSA’s history book, The Voice of the Foreign Service, and its 75th anniversary dinner celebration; two annual AFSA awards—the Nelson B. Delavan Award for an office management specialist and the Tex Harris Award for constructive dissent by a Foreign Service specialist; the American Academy of Diplomacy’s books First Line of Defense and Commercial Diplomacy and the National Interest; several reports with the Henry Stimson Center on the professional education of diplomats and on the challenge of balancing the security of personnel with effective diplomacy; several Una Chapman Cox Foundation studies of the conduct of American diplomacy, with specific recommendations; DACOR Bacon House’s accessible entrance; ADST’s Foreign Affairs Oral History program, including oral histories of AFSA presidents; and a significant donation to the ongoing National Museum of American Diplomacy project. We all owe the Harrops so much.

The Foreign Service did not interrupt Ann’s lifelong love of, devotion to, and dependence on her dogs to cheer, comfort, and inspire her. She appreciated and benefited from their loyal companionship and the endless, fresh joy they contributed to home and family. They include: Thunder, who escorted her to elementary school; Jeannette, the basset hound; Lady and Sheena, the Irish setters in Australia; sweet Barney in Kenya; Shaba and Kivu, the ridgebacks in Zaire; Sophie in Israel; and Ben and Charles, who helped raise her grandchildren. Her bond with dogs and their contribution to her own happiness is beautifully representative of the enduring tradition of Foreign Service dogs.

Nor did the Foreign Service inhibit Ann’s talent for poetry, instead apparently nourishing and inspiring it. I couldn’t possibly do justice to it, so instead will just say that her verses are gems. Please discover them for yourself if you have not already. Ann’s death was not sudden, and the poems she wrote in anticipation of it revealed her inner peace, as well as her wry sense of humor and quick wit.

Ann lived her long and rich life well in the best sense of that word—with jest, curiosity, intelligence, generosity, persistence, humility, a love of dogs and all animals, unassuming courage, and quiet poise. She met life’s setbacks, changes, and challenges with equanimity, persistence, humor, and grace. Her remarkable individuality shone through it all.

Ann and Bill’s lifelong direct and creative engagement with the Foreign Service encompassed many aspects of Foreign Service work and life, from foreign policy formulation and the conduct of diplomacy to stewardship of the Department of State and the Foreign Service as a distinct institution and ethos, to the encouragement and empowerment of others working in these fields inside and outside the State Department. 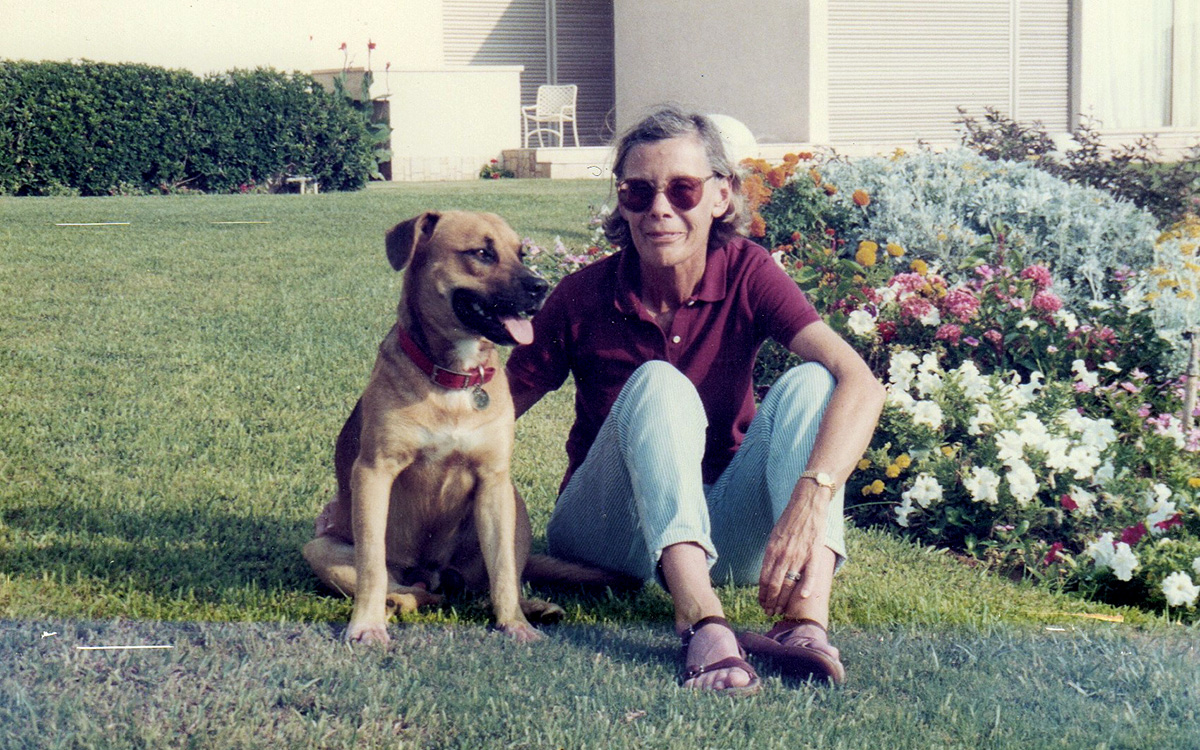 Ann with her dog, Ben, in Israel in the early 1990s.
Courtesy of Bill Harrop 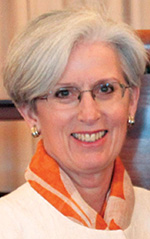 Susan Rockwell Johnson is president of the Association for Diplomatic Studies and Training and a former AFSA president. She retired in 2015 after a lifetime in the Foreign Service as the daughter of a career FSO and then her own 35-year career. 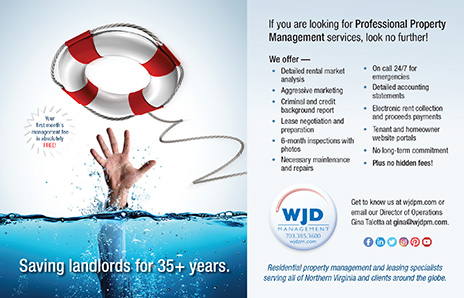 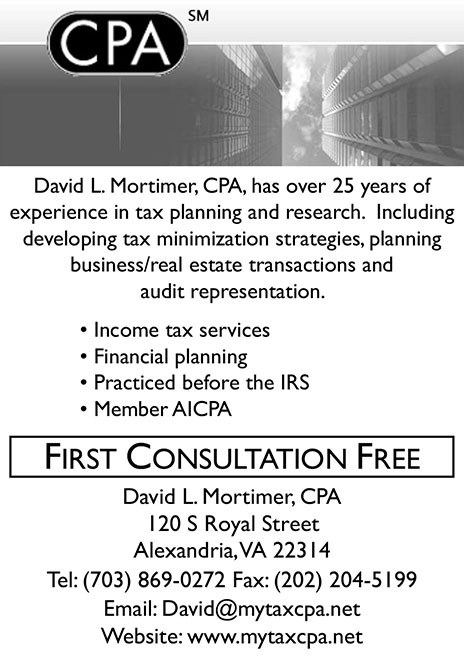