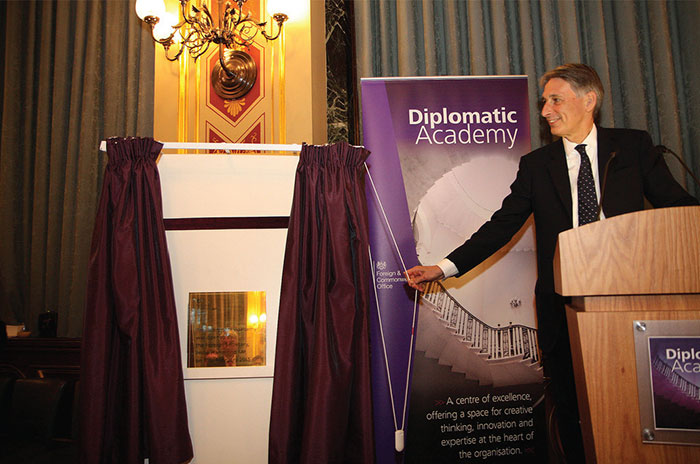 It's an honor to be asked to contribute to The Foreign Service Journal. Throughout my 25 years in the British Diplomatic Service, I have been lucky enough to serve with, and befriend, many brilliant, delightful colleagues from the U.S. State Department. I have learned much from them, and continue to do so in my current role as director of the Foreign and Commonwealth Office’s new Diplomatic Academy.

It surprises many around the world—and indeed in our own country—to hear that until now, Britain has never had an institution dedicated to equipping its representatives with the skills, knowledge and tradecraft for diplomacy. Despite our long diplomatic history, or perhaps in part because of it, we have got this far without an equivalent of your Foreign Service Institute.

Of course, that doesn’t mean we did no learning or training. For many years we had a Training Department, running a range of courses from induction onwards. We have a long tradition of language instruction. More recently, we have transformed the professionalism of our consular work. But there was still an expectation that those we recruited would become professional almost entirely “on the job.”

So why set up such a diplomatic training institution now? In essence, we have recognized that the expectation that we could rely on "on the job" training was increasingly unrealistic, and that we needed to ensure we could provide consistently strong learning across the whole range of what constitutes diplomacy.

As William Hague, who was British Foreign Secretary at the time the creation of the Diplomatic Academy was announced, put it in a statement to the House of Commons last July:

“The Academy, which will be a central part of the Foreign Office with dedicated rooms, including a library area within the King Charles Street headquarters, is vital to building up the long-term strength and effectiveness of the Foreign Office as an institution. It is at the heart of my vision of a Foreign Office that is an international center of ideas and expertise; that leads foreign policy thinking across government; that is recognized as the best diplomatic service in the world; and that is able to defend our country’s interests in an unpredictable and competitive international landscape for the long term.”

I am sure that the more competitive among our State Department colleagues reading this might not welcome our aspiration to be the best diplomatic service in the world! But that is indeed the goal. And it is not just the goal of the political leadership of the Foreign Office in the person of William Hague or, now, Philip Hammond—though I was delighted to hear the new Foreign Secretary confirm his support of this aspiration in his first all-staff meeting after our recent general election.

We needed to ensure we could provide consistently strong learning across the whole range of what constitutes diplomacy.

The senior officials leading the organization, with Permanent Under Secretary Sir Simon Fraser in the vanguard, have also championed the idea, both as part of an effort to improve how we learn and develop as individuals and as an organization, and also as an essential part of his Diplomatic Excellence Initiative. One of the key themes of that initiative is a strong and skilled workforce, alongside a strong global network, policy excellence and consular excellence—all underpinned by the initiative’s values: taking responsibility; encouraging innovation; working together.

There are a couple of other key principles in how we are establishing the Academy. First, the institution should be a resource for all those working to advance British interests internationally. That means equal participation, as learners and as contributors, by both our locally employed staff overseas and our London-based staff (the equivalent of your Civil Service). It also means making what the Academy does as open as possible to all parts of the British government working for our interests internationally, whether in London or across the Foreign & Commonwealth Office network of embassies and other missions. Both those aspirations involve challenges, from cost to location to information technology. But we believe that for the Academy to have the required impact, we need to be involving this whole cast of colleagues.

One of the other fundamental principles is to make much better use of the knowledge, skills and expertise already available in that huge cast of talented colleagues from across the FCO and the entire U.K. government. I am sure there is a similar situation in the American system: vast reservoirs of untapped learning. It’s not that people do not want to share what they know—on the contrary, they enjoy doing so. Nor is it that people sit around thinking they know it all already—there is a huge appetite to learn more and improve performance. But we have struggled to find a system to help make this learning sufficiently easy and structured that it becomes a habit. I hope that the Diplomatic Academy will help us do that.

What the Academy Will Do 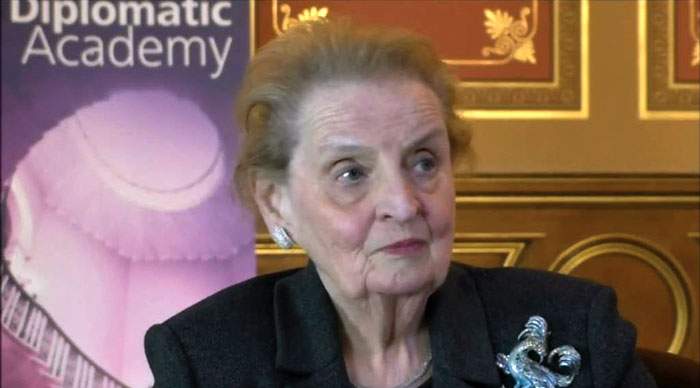 Former Secretary of State Madeleine Albright shares her thoughts on diplomacy with the Diplomatic Academy in February.
Courtesy of the U.K. Foreign & Commonwealth Office

So what will people learn and share through the Diplomatic Academy, and how?

We decided early on that we needed a way to make sure that the learning in the Academy was aligned with what the Foreign Office and the British government more broadly actually needed. Drawing on the experience of private- and public-sector institutions, we opted for a faculty system. The 11 faculties cover all the key areas specific to engaging internationally in our country’s interests: international policy; diplomatic practice; states and societies; understanding the U.K.; consular and crisis management; economics and prosperity; Europe; multilateral; security, defense and intelligence; law; and languages.

At this point, I need to set out a couple of major differences between our model and that of FSI. The central Diplomatic Academy team is very small, about 15 people in total at the moment. We rely heavily—and expect to continue to do so—on colleagues with other full-time “day jobs” to lead the creation of learning and drive engagement in it. (More on that in a moment.) This means that the faculties are headed by a directorlevel colleague for whom that is just one part of a heavy list of responsibilities.

We have done this in part because those senior leaders should bear much of the responsibility for ensuring their workforce has the right knowledge and skills, and for knowing what the capability gaps and priorities are for their area of the business. In other words, they know what they need people to do and have a strong interest in them learning how to do it, and do it well.

We are also beginning to flesh out a very simple three-level system: Foundation, Practitioner and Advanced. We have just launched the Foundation level, which (as the name suggests) represents the basic knowledge and skills which anyone representing the U.K. should ideally have. Put another way, it’s what you’d be embarrassed not to know.

The institution should be a resource for all those working to advance British interests internationally.

There will be relatively little use of face-to-face classroom teaching at the Academy. Instead, instruction in the eight modules will employ a blend of techniques, including e-learning. It will also introduce to a wider FCO audience the idea of learning groups. The modules are designed so that individuals can work through them alone, but such a learning experience would be poorer. We are putting the responsibility on individuals to make sure that they get involved in a group and work through the curriculum with fellow members to get the most out of the material.

Successful completion of all eight modules will lead to an externally accredited qualification.

I’m delighted to say that one of the Foundation-level units provided the latest example of excellent collaboration between our two governments.

Your ambassador to the U.K., Matthew W. Barzun, and his team have been great supporters of the Academy even before we were formally launched. He has already given a solo master class; shared a doubles act with our ambassador in Washington, Sir Peter Westmacott; spoken at our “Faculty Teams Retreat”; and sampled some of our training for heads of mission.

In early May, British and American colleagues used our new Foundation unit on the U.K. elections for some very timely joint learning. I should also note that our new Inspirational Speakers Series was launched with a hugely successful appearance by former Secretary of State Madeleine Albright, who was in magnificent form.

Let me also thank Nancy McEldowney and her team at FSI for a fascinating visit last November. We had already drawn heavily on FSI’s experience when creating the Academy, but it was great to see it in person and talk to those working and learning there. I confess to leaving with envy of the resources secured for it, and the “training margin” (also called the “training float”) to make good use of it.

There will be relatively little use of face-to-face classroom teaching at the Academy.

One of our greatest challenges, both in reality and in terms of people’s perceptions, is helping employees make time for learning. Your readers don’t need to be reminded how the world we work in grows more complex, fast-paced and, indeed, threatening as each year goes by. But I hope by making sure what the Academy does is of the highest quality, and by allowing people to discover just how their performance can improve when they make use of that, that they will consider the time required for learning an essential investment in their own future and that of our organization.

We will also, where appropriate, be hard-wiring some Academy learning into our evolving promotion model. Successful completion of the Foundation level, for example, will become essential at one particular step up the ladder. And for entry to our senior management structure, colleagues will have to have reached Practitioner level in a number of faculties.

There are other challenges, too, not least ensuring that our curriculum and materials keep pace with that new complexity and the new environment. Among other things, that means trying to stay up with the curve on new media (do follow us on Twitter at @UKDipAcademy, by the way) and big data; or on resilience—I have had really useful discussions recently with colleagues at FSI on that.

At the same time, we need to ensure we keep today’s diplomats equipped with the knowledge and skills which have always been essential to our work, from understanding a country (or institution) and its language and culture, to the unchanging fundamentals of influencing and negotiating.

One final thought: Our countries work together to extraordinary effect around the world, and our diplomats are often at the heart of that. I hope the birth of the Diplomatic Academy gives us a new way, working with FSI, to add a new element to that collaboration—learning together, so we can work together even more effectively. I look forward to it. 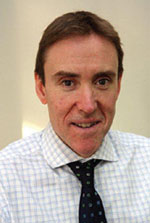 Jon Davies joined the United Kingdom’s Diplomatic Service in 1990. He has spent much of his career working in or on the Middle East, but has also served in Madrid and worked on consular issues in London. His latest overseas posting was as deputy head of mission in Cairo (2007-2010). He then returned to London, first as Iran coordinator, then as director of the Middle East and North Africa office. Last year he took up his current position as director of the Diplomatic Academy.