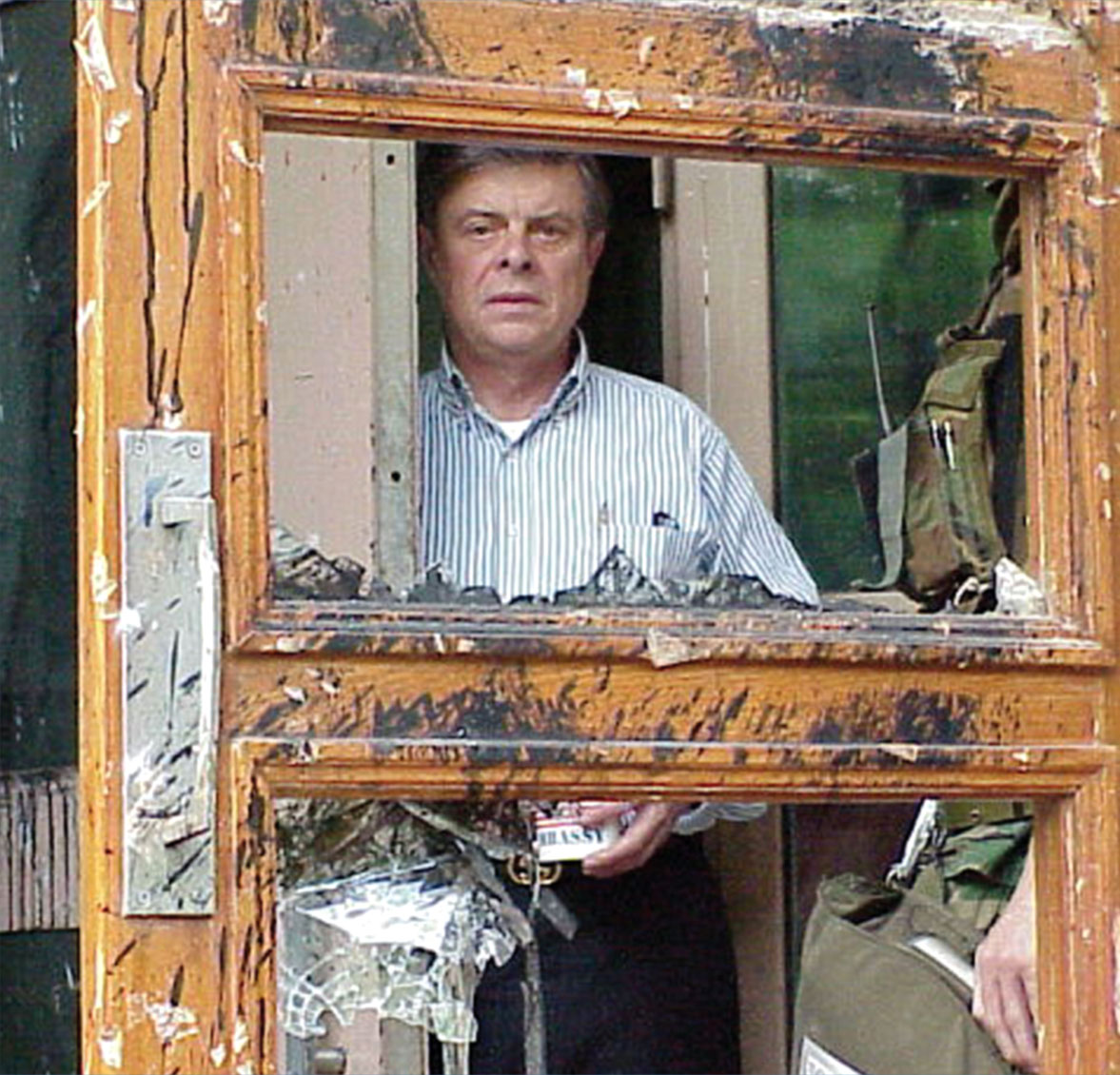 Then-U.S. Ambassador to China James Sasser peers through the heavily-damaged door of Embassy Beijing on May 10, 1999, following two days of attacks by Chinese protesters over NATO’s May 7 bombing of the Chinese embassy in Belgrade.
Reuters

The buck stops at the regional security officer’s desk. All security officers know that, yet few of their colleagues acknowledge it. This dichotomy is at the heart of the ongoing tension between security professionals and the diplomatic staff of our embassies and consulates.

When there are failures, the security officer will be at the center of after-action investigations, including Accountability Review Boards. These investigations will start with the assumption that in some way the RSO was negligent in carrying out assigned responsibilities. The recent dramatic attack on Ambassador Mark Lippert in Korea and the ongoing debate about what happened in Benghazi are but the latest examples of this phenomenon.

Outside critics want to know whether the RSO took all appropriate steps to protect Ambassador J. Christopher Stevens in Benghazi. And did Amb. Stevens take all appropriate steps to protect himself as he carried out his duties as chief of mission? While it isn’t useful to get into the substance of that highly charged debate, several senior Diplomatic Security Bureau heads did roll in the aftermath of Amb. Stevens’ death, and a great deal of attention was focused on specific security measures that were (and were not) taken at the facility in Benghazi. The same may now be true with the attack in Seoul.

Such incidents should give us pause and prompt us to ask how security professionals can do their jobs in an extremely dangerous world, particularly when so much second-guessing goes on? We all know there is no perfect security; we cannot protect all of our overseas personnel all of the time everywhere. Some element of risk goes with the practice of diplomacy. It is, however, the security professional’s job to minimize that risk, making possible the conduct of diplomacy while protecting information, facilities and personnel as much as possible.

The solution is triage: balancing risks and threats against the requirements of programmatic and diplomatic activity in dangerous foreign environments.

We all know there is no perfect security; we cannot protect all of our overseas personnel all of the time everywhere.

For many years, the United States government has tried to calculate risk in a systematic way. As early as the 1990s, every post in the world, whether large or small, was placed in a series of threat categories (critical, high, medium, low) related to terrorism, crime, political instability and technical vulnerability. These designations were worked out by DS professionals in collaboration with the intelligence community and diplomatic personnel abroad.

These early efforts were designed primarily to assist decision-makers in determining what resources, both human and financial, should be deployed and where they were most needed. It was assumed that meaningful distinctions were possible and that threats were not universal.

Unfortunately, since then it has become clear that terrorist threats exist virtually everywhere, from Ottawa and London to Tripoli and Sana’a. Some are more obvious than others, or more likely to happen, but the reality is the same: Terrorists can carry out a unilateral attack almost anywhere in the world if they are willing to sacrifice their own lives to take the lives of others. Good intelligence can minimize that risk; good security can mitigate the damage in terms of both physical destruction and loss of life, but no system is fail-safe.

In the 30 years since Admiral Bobby Inman completed his report on diplomatic security for the State Department in the aftermath of the 1983 Beirut embassy and Marine barracks bombings, there has been a steady reinforcement and strengthening of embassies and consulates around the world. The Inman Commission recommended a multibillion-dollar program of embassy construction.

The new facilities, officially known as New Embassy Compounds, are characterized by increased setback, blast walls, strict fenestration standards for windows and myriad access controls. Their purpose is to address the vulnerability of embassies and consulates to street-level truck and car bombing, as well as a general lack of focus on security in many overseas missions.

Congress never appropriated enough funds to build all the chanceries needed to carry out the Inman Commission's recommendations.

Although State pushed for substantial additional resources to construct new embassies in the most vulnerable locations in the Middle East and Latin America, Congress never appropriated enough funds to build all the chanceries needed to carry out Inman’s recommendations. As a result, disaster struck again in August 1998 with the bombing of our missions in Nairobi and Dar es Salaam.

A new task force was appointed under the leadership of Admiral William Crowe. His report reiterated many of the same recommendations contained in the Inman report, but emphasized the need to move embassies from vulnerable downtown locations to new premises where enhanced security measures could be put in place.

Notwithstanding massive increases in the DS budget and the construction of dozens of new embassies, many vulnerabilities remained. Even after applying diplomatic security triage, the department struggled to identify the posts which were most at risk or where the facilities were most lacking in state-of-the-art protection.

In fact, resources have never been adequate to do all that needs to be done to protect all U.S. staff overseas. To be sure, we have made real progress, so that it is now very difficult for criminals, terrorists or hostile security services to gain access to our facilities. Yet weaknesses remain, particularly when host governments do not live up to their responsibility to protect diplomatic premises.

To the great frustration of many security professionals, efforts to tighten security often meet resistance at overseas posts. During my time as assistant secretary of State for diplomatic security in the 1990s, ambassadors frequently complained if their threat levels were raised even one notch. They simply did not subscribe to the new reality of pervasive threat, worrying more that their staff would not be able to carry out their assigned responsibilities if all DS recommendations were put into place. 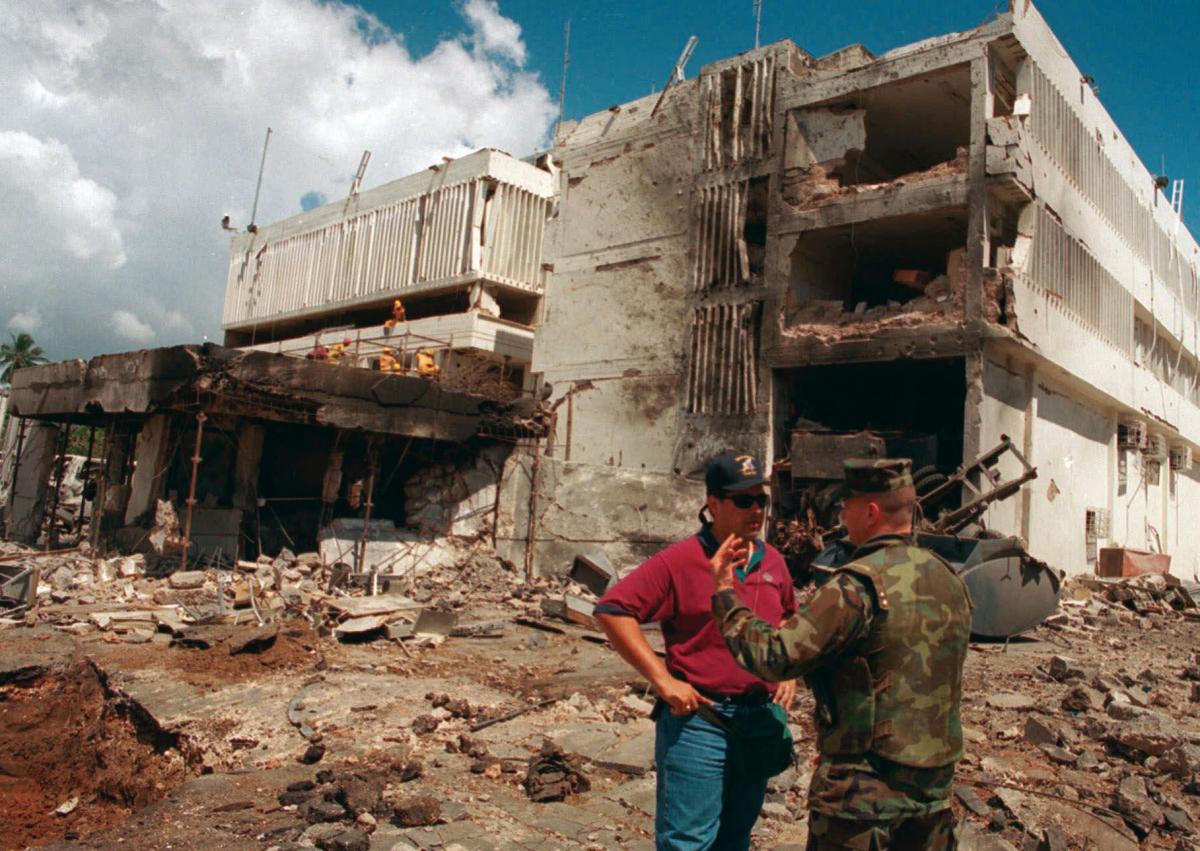 A U.S. Marine talks with an FBI investigator in front of Embassy Dar es Salaam on Aug. 15, 1998. Eight days earlier, bombs had exploded almost simultaneously there and at Embassy Nairobi, killing 224 people and wounding more than 5,000.
AP Photo / Brennan Linsley

Despite those objections, freedom of movement has already been severely constrained in many high-risk countries, many of which have even been designated unaccompanied posts. Heavy travel restrictions are in place for U.S. government employees, and whole cities and regions are off-limits.

Do access controls, designed to keep malefactors out, also keep out our own citizens, critical sources of information or the wider foreign public whom we seek to influence? Does a preoccupation with security outside the official compound lead to unnecessary travel restrictions?

Does the need for all staff to travel in fully armored vehicles, or for an ambassador to have bodyguards, inhibit the practice of diplomacy? In short, is it now too difficult for officers to get out to gather the information they need or to interact with foreign officials whom they wish to influence, or to carry out essential program management and oversight?

Based on my experience in the field and in Washington, I would have to say such concerns are somewhat exaggerated. When I was ambassador to Lima from 1989 to 1992, at the height of threats from Shining Path insurgents, our designation as a critical terrorist threat post never prevented me from carrying out my responsibilities.

Yes, I chafed under much of the protection and the occasionally intrusive steps required when I wished to travel outside the capital or attend a social event. But even though my entire staff and I were living under the constant threat of rocket attacks, car bombs and kidnappings, our team of RSOs made it possible for us to do our jobs and even travel to remote parts of Peru.

Similarly, as DS assistant secretary, I traveled to critical-threat posts on every continent to see for myself how our enhanced security policies operated in real life. I found that RSOs were committed to meeting the needs of chiefs of mission and their staff members to conduct diplomatic business, and I am confident that is still true today. To be sure, sometimes complex special procedures were in place which imposed delays, but at the end of the day most officers acknowledged and supported the security policies. These arrangements were not perfect, but the essential business of diplomacy carried on even in circumstances where there were very real dangers.

Not an Impossible Task

That said, there is an unavoidable price to be paid for enhanced security measures. Some foreign contacts are turned off from visiting what they sometimes call “fortress embassies,” and even those willing to run the security gauntlet have a hard time creating the easy and open relationships of the past. Limited resources can make staff travel more difficult.

One should not be Panglossian about the situation. There are tensions. There are resentments. And there can be unnecessary rigidity. However, protecting our diplomats must be our top priority. We can never eliminate all threats, but we can minimize them. Several U.S. ambassadors have been kidnapped and murdered, and numerous embassies rocketed and bombed. As the attack on Amb. Lippert demonstrates, our diplomats will remain targets.

Security officers and diplomats are all in the diplomacy business together, and must work for the collective good and safety of our missions. Diplomats must accept some restrictions, just as security officers must accommodate mission requirements.

Diplomatic security triage will be needed to balance risks and requirements in a world where America’s active role remains crucial. In short, we must manage risks in a dangerous world. Fortunately, this is not an impossible task. 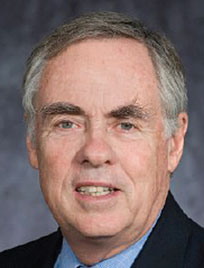 Anthony C.E. Quainton, a retired Senior Foreign Service officer, is currently a Distinguished Diplomat-in-Residence at American University. From 1992 to 1995 he was assistant secretary of State for diplomatic security. He also served as ambassador to the Central African Republic, Nicaragua, Kuwait and Peru.