Diversity: Not Just a Cause for the Underrepresented

The Foreign Service Journal > September 2018 > Diversity: Not Just a Cause for the Underrepresented

A colleague, who recently served as international narcotics and law enforcement director at an overseas post, described for me a typical situation in her host country. While meeting with beneficiaries of a program to improve police and youth relationships, the men in the room did all the talking. Once the session was over, however, many of the youth and their mothers approached her separately and revealed additional details about the program’s success and shortfalls.

Many of the beneficiaries felt uncomfortable sharing their views within the group. My colleague quickly learned she could connect to the female beneficiaries as a fellow mother and sister, and glean important information about how this $9 million project was being implemented.

Many civil servants, specialists and other officers have had similar experiences, where their common gender, ethnicity, religion or shared background facilitated an encounter that directly enhanced their work. To the degree that we build diverse teams to carry out our work, we increase our access and efficacy as a department.

The value of diverse teams in the private sector is virtually uncontested. A 2015 study by McKinsey & Company found that companies in the top quartile of ethnic diversity were as much as 35 percent more likely to have financial returns above their national industry median, while companies that were less diverse were more likely to lag behind their industry median.

A 2013 study in the Harvard Business Review found that a team with a member who shares a client’s ethnicity is 152 percent likelier than another team to understand that client. In other words, simply being on a team with members who share traits with your client increases your likelihood of better understanding them.

The implications for U.S. foreign policy are significant: Few countries have as diverse a population as the United States. This unique advantage places the United States and the State Department in an enviable position to assemble, in Secretary of State Mike Pompeo’s words, “the world’s finest diplomatic corps.” Other global powers like China and Russia, even some of our European allies, staff their foreign ministries from more homogenous populations.

Where private-sector companies compete with one another to attract diverse candidates to give them an edge, the State Department sits unrivaled by other governments in our potential to recruit and assemble a diverse foreign policy powerhouse—if we put the resources into recruiting diverse candidates.

As section heads, office directors, management counselors, human resource specialists, deputy chiefs of mission and ambassadors, we have a vested interest in assembling and leading successful teams. If we do not recruit a diverse pool of new officers and ensure we have a diverse corps of senior staff leading the department, we cannot continue to build the experiences to maintain and grow this competitive edge.

As employees, we should all want to serve on teams that have the highest probability of success. From an organizational perspective, diversity is not just about equity and fairness; it is foremost about performance and results. Each of us should feel compelled to be part of a diverse organization, regardless of our ethnicity, gender or background.

Recognizing Your Place on a Diverse Team

As I consider my own role in a diverse workplace, I look at facets that may set me apart from my co-workers: my experience as a military brat; my conservative religious upbringing; my growing up abroad; my work experience; and my perspective as a parent and spouse. If prospective supervisors do not see how I might fit into a diverse team, then I have failed to communicate the value my experiences offer.

Leaders seeking to build truly diverse teams recognize the value in recruiting employees from all backgrounds, but some employees—white men, in particular*— may struggle to see how they can contribute to a diverse office, viewing it instead as a zero-sum game that threatens their job prospects.

It’s not an uncommon scenario: You’re at the end of a promising interview during bidding season when the hiring official mentions how his or her office is dedicated to building a diverse workforce. For many white men, the messaging seems clear: they would prefer a minority candidate. A 2016 study by professors at the University of California Santa Barbara and the University of Washington found that pro-diversity rhetoric in the workplace led most white men to believe that they would be treated unfairly.

The study put two groups of white men through an interview process. For half of the applicants, the recruitment materials made mention of the company’s pro-diversity values. The other half received the same materials, but without any mention of diversity. Researchers found that white men interviewing at the company that mentioned diversity expected unfair treatment and discrimination against whites. They also performed more poorly in the job interview, and their cardiovascular responses during the interview revealed that they were more stressed.

The impact is not just theoretical. When employees in the Bureau of European and Eurasian Affairs recently formed a diversity working group, one member related how she was confronted by a few white male colleagues who felt the group would make it harder for them to get jobs. This fear isn’t necessarily the product of bias, misogyny or political ideology.

The 2016 study cited above found that diversity messages led to men feeling threatened regardless of their political leanings, attitudes towards minority groups or beliefs about fairness. In other words, even white men who endorse the tenets of diversity and inclusion can feel threatened by diversity messaging.

The study findings provide some personal validation. While I support diversity efforts to improve institutional performance and as a fundamentally moral issue of equality, I also harbored concerns that diversity programs at State were (intentionally or not) designed to ensure there were fewer people like me in offices and missions abroad. I have found that one powerful solution to overcoming this concern is getting more involved in diversity-related efforts.

As a member of EUR Bureau’s Diversity Working Group, I am able to contribute to discussions related to recruiting and challenges in promoting diversity effectively and fairly; and I provide a distinct and valued viewpoint to the group. When we, as white men, actively engage in diversity promotion, we become part of the effort to build truly diverse teams that are inclusive and focused on improving the institution. Our participation sends a powerful message to our co-workers about our commitment to create a supportive working environment.

Participating in the Diversity Working Group has also quelled some of my anxiety over the group’s aims; and I, in turn, help provide the group a perspective that bolsters its legitimacy. After all, a diversity working group by definition should aim to include as many people from different backgrounds and sectors as possible—including white men.

Why White Men Should Help Lead on Diversity

Another reason for white men at State to promote diversity: we can do so without fear of reprisal. A 2016 study by Professor David Hekman, from the University of Colorado, found that women and nonwhite executives who valued diversity were routinely rated as less competent and lower-performing. White male executives who promoted diversity experienced slightly better ratings and were perceived as competent, regardless of their position on diversity.

The study uncovered similar findings for managers engaged in hiring. An Atlantic article detailing the study even pointed to the National Center for Women and Information Technology, which encouraged corporations to place a white man in charge of diversity programs because he could ostensibly manage it without reprisal.

The lesson for our nonwhite, nonmale colleagues is clear: Your institution can benefit from being more diverse, but your career will likely suffer if you promote it. In the current environment, white men are in a unique position to help lead the effort to promote diversity at State without negative repercussions to our careers.

The State Department is in an excellent position to form the most diverse corps of professional diplomats in the world. Consequently, our competitive advantage on the foreign policy front is unparalleled; and, as an organization, we should seek to exploit it. Promoting diversity within our ranks is not a zero-sum game or charity effort intended to provide underrepresented groups with expanded opportunities to compensate for social injustices. It is one of those confluences where the right thing to do is also the best thing to do for our organization.

White men may feel threatened by diversity promotion, but by getting involved we can help shape a workforce that is fully inclusive and provides us with better opportunities to excel within our own fields. Ironically, as white men, we may be the best-positioned to help lead this change. Certainly, we do nothing for our institution or ourselves by leaving it solely to underrepresented groups to bring about.

* The author recognizes that the term “white men” is inherently broad and may include sub-groups that might identify as underrepresented based on sexual orientation, religion, economic background or ideology. 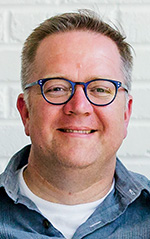 Jay Porter currently serves as the senior desk officer for Italy, the Holy See and San Marino in the Bureau of European Affairs’ Office of Western European Affairs. He joined the department in 2008 and has served with his family in Turkey, Albania and El Salvador. Prior to joining the Foreign Service, Porter worked for a nongovernmental organization in the United States and Central America.