The Congress finds that–a career Foreign Service, characterized by excellence and professionalism, is essential in the national interest to assist the President and the Secretary of State in conducting the foreign affairs of the United States … The objective of this Act is to strengthen and improve the Foreign Service of the United States by assuring, in accordance with merit principles, admission through impartial and rigorous examination, acquisition of career status only by those who have demonstrated their fitness through successful completion of probationary assignments, effective career development, advancement and retention of the ablest, and separation of those who do not meet the requisite standards of performance. …

These words contain the seeds of the up-or-out system, entrance via examination, the tenure system, worldwide availability, professional development, the separation of those who do not advance to the next level and the role of Foreign Service members in formulating and implementing the foreign policy of the United States.

The Foreign Service Act is not just a guide to the functioning and structure of the institution, however. The fact that the Foreign Service has a foundational document gives us direction and a clear role as stakeholders, as stewards responsible for maintaining the health and vigor of our institution.

The language of the Act highlights the need for a professional Foreign Service and makes it clear that the Congress of the United States considers a Foreign Service “characterized by excellence” to be in the national interest.

AFSA’s mission is to promote policies and practices that strengthen the Service and to further the interests and well-being of our members. A strong Foreign Service is one that has the resources, the leadership and the motivation to live up to the promise of the Act.

For that reason, AFSA’s work often focuses on policy measures and other actions that invigorate professionalism, such as protecting the integrity of the promotion process and improving the experience of entry-level officers so probationary assignments provide a meaningful basis for judging whether career status should be granted.

Much like the U.S. Constitution, the Foreign Service Act can serve to protect the institution, to set a standard, to lay down our rules and to be an inspiration. We have used it again and again to preserve the Foreign Service as a professional body that produces high-performing members, responsive to the foreign policy needs of the United States. It is a reassuring presence.

So take a look at the Act. Prepare to be surprised at how specific some of the language is—Congress really paid (and still pays) a lot of attention to what we do and how we do it—and note how inspirational it is in other places. 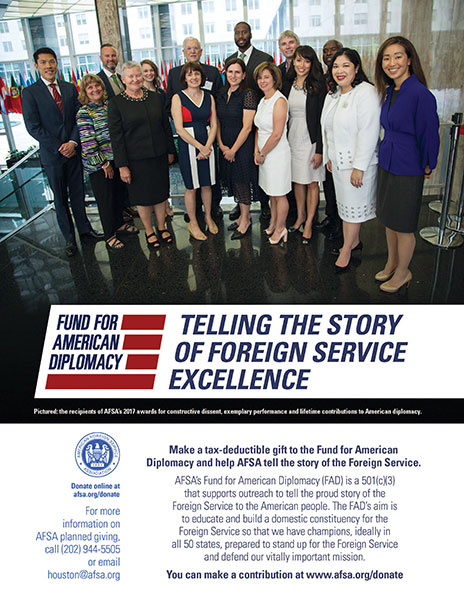