Life after the Foreign Service begins with planning. Here’s how to get started. 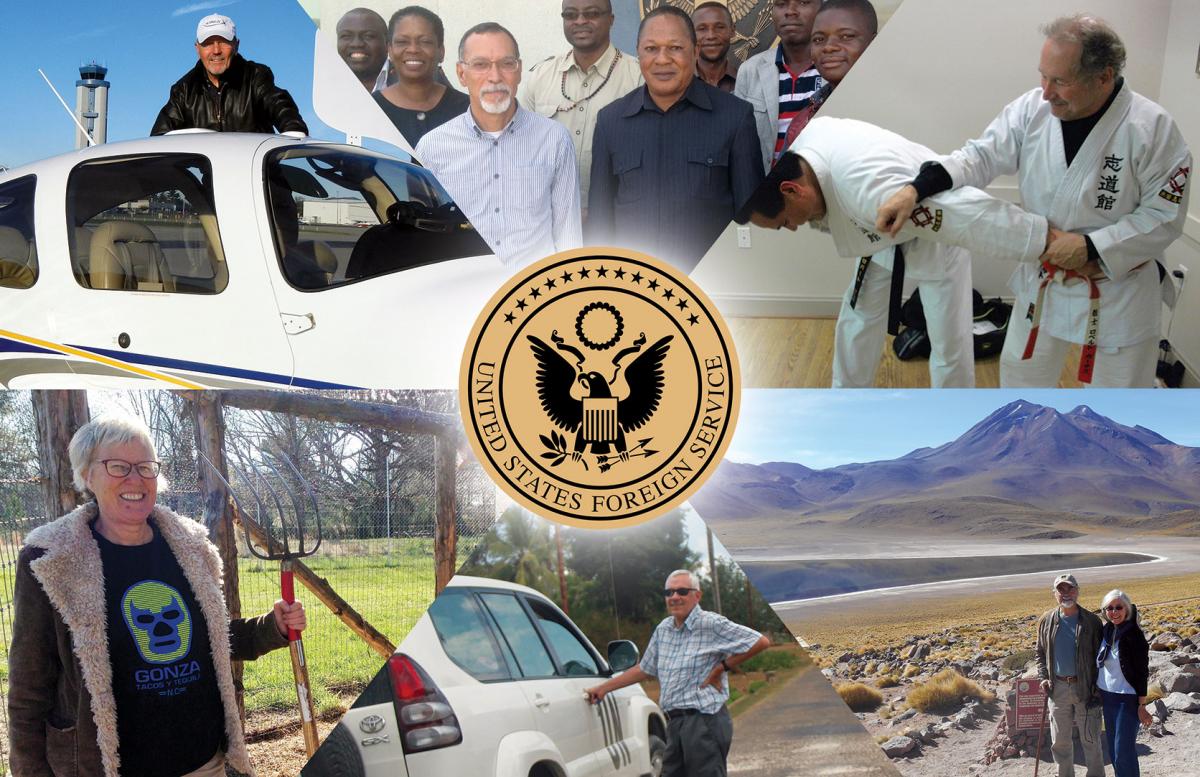 Who in their late 20s to early 50s, preoccupied with the demands of work, family and daily life, has time to plan for a retirement that is many years away? The answer is that we all had better make time for that if we want to be well-positioned to enjoy life after the Foreign Service.

I know you’re all busy, so here is a quick guide for early- and mid-career employees who realize that retirement planning is important, but have not yet gotten started.

Show Me the Money

Many Foreign Service members have only a vague idea of what makes up their retirement package. That, obviously, makes it impossible to do even basic planning. So here is an overview. This article focuses on those of us who joined after 1983 and are thus enrolled in the “new” Foreign Service Pension System. Employees who fall under the “old” Foreign Service Retirement and Disability System should consult the Department of State Office of Retirement website (https://RNet.state.gov) for information on that plan.

Once FSPS participants qualify for retirement, here is what we receive:

Pension. Our annuity is based on our “high three” average salary and years of service. The salary is calculated by adding average basic pay (determined by multiplying each salary by the number of days that it was in effect) for our three highest-paid consecutive years and then dividing by three. Basic pay includes regular pay, domestic locality pay and overseas virtual locality pay, but excludes allowances, differentials and overtime.

This “high three” salary is then multiplied by 1.7 percent for each of the first 20 years of service, plus 1 percent for each additional year. For example, an employee retiring with 25 years of service and a “high three” salary of $100,000 would qualify for an annual annuity of $39,000. That amount, however, provides no benefits to a surviving spouse after the annuitant’s death. Providing the maximum survivor benefits reduces the annuity by 10 percent to $35,100.

Thrift Savings Plan. As you can see, no matter how many years you serve, your FSPS annuity plus Social Security will not come close to replacing your pre-retirement income. Thus, the Thrift Savings Plan must be a key part of your retirement planning. Contribute up to 5 percent of your salary and Uncle Sam will match it—“free” money that no one should pass up. To position yourself well for retirement, you should contribute at least 10 percent of your salary to TSP.

Those who can afford it should contribute an amount as close as possible to the annual maximum ($18,000 in 2016) and take advantage of post-age 50 “make up” contributions (up to $6,000 in 2016). You can use calculators on the TSP website at www.tsp. gov to generate estimates of your TSP account growth and postretirement withdrawals under different scenarios.

If you want—or need—to work after retiring from the Foreign Service, the following general rules apply. Send any specific questions to the Human Resources Service Center at HRSC@state.gov.

Your Annuity. If you retired on an immediate annuity, it will be paid each month unless you are re-employed in a career, full-time federal position. Thus, you may work in the private sector or in a part-time federal position and still receive your full annuity. But if you take a fulltime federal job that is covered by a retirement plan, payment of your annuity will be suspended. In addition, Foreign Service annuitants face a cap on earnings from part-time federal employment. The sum of the parttime salary plus annuity may not exceed the higher of the salary at retirement or the full-time salary of the re-employment position.

Your Annuity Supplement. If you are receiving an annuity supplement, it will be paid each month until age 62 unless you are re-employed in a career, full-time federal position. After you reach the Minimum Retirement Age as defined in the provisions for the annuity supplement (between 55 and 57, depending on your year of birth), the annuity supplement is subject to reduction if you make more than a certain amount in wage income ($15,720 in 2016). Your supplement will be reduced by $1 for every $2 earned in excess of the exempt amount. The reduction is applied the year after you have excess earnings.

Re-employed Annuitants. Many Foreign Service annuitants seek part-time work as re-employed annuitants (REAs), a category formerly known as While Actually Employed. Regional and functional bureaus both utilize REAs to fill short-term staffing gaps and meet workload surges. The first step is to get your name on the centralized registry by contacting the HR Service Center at (866) 300-7419 or the bureau coordinator (a list can be found at https://RNet.state.gov) where you want to work. The next step is to network and lobby, since bureaus usually turn first to annuitants who are “well and favorably known” by bureau hiring managers. It is advisable to start networking at least six months before you retire.

How much money will you need to retire comfortably? Experts say that most people can continue their current lifestyles into retirement on 85 percent of their pre-retirement gross income. One reason for that reduced need is that deductions for Social Security, Medicare, TSP and FSPS contributions can consume at least 15 percent of pre-retirement gross income, and those deductions end at retirement. Of course, your retirement income needs may be higher or lower, depending on your desired retirement lifestyle and continuing financial commitments such as children’s college expenses.

You can judge your financial trajectory for retirement by estimating your annuity, Social Security and TSP income as of a target retirement date. If you have no idea when you might retire, then run your numbers based on first eligibility—which, for most FSPS employees, is at age 50 with at least 20 years of service, as established by the Foreign Service Act of 1980.

If the calculations fall short of how much money you desire, then you need to adjust plans. For example, staying in the Foreign Service longer will increase your annuity by raising the multiplication factor and the “high three” average salary. Postretirement employment is an option exercised by many Foreign Service retirees, but your annuity supplement and Social Security payments are subject to reduction if you go back to work and receive significant wage earnings (in excess of $15,720 per year in 2016). Other options are to invest more of your take-home pay in the stock market, rental property and/or an Individual Retirement Account.

As you plan your future finances, there are several things to keep in mind in order to best position yourself for retirement.

Risk vs. Reward. How you manage your TSP savings will have a major effect on your retirement finances. Because many current employees will need to draw on their TSP savings 30, 40 or even 50 years from now, most experts recommend investing in funds with relatively high average rates of return (the C, S, I and the long-range L funds) to increase the chances that your TSP savings will be around as long as you are. Conversely, keeping all your money in bond funds (the G and F funds) may not generate gains in the coming decades that out-pace inflation.

Save, Save, Save. While saving for retirement is vital, doing so can be difficult depending on your cash flow situation. To increase savings, some experts urge cutting back on frequent small splurges that add up over time—for example, that daily gourmet coffee. Others say to cut back on big purchases, such as buying a luxury car. Most experts endorse the tactic of “pay yourself first” by signing up for a large TSP payroll deduction so those funds never enter your take-home pay for discretionary spending. If you receive a hardship differential or an inheritance, consider investing a chunk of it in retirement savings.

With any luck, you will spend longer in retirement than you did in your working career.

Location, Location, Location. Where you retire can affect your net income. The Internal Revenue Service taxes annuity payments, TSP withdrawals and Social Security, but some states do not. Thus, retiring to certain states can raise your after-tax income. For a state-by-state analysis, see the AFSA Tax Guide published each January in The Foreign Service Journal and posted at www.afsa.org.

Health Insurance. As long as you are enrolled in a federal health insurance plan for the five years prior to retirement, you may keep that coverage after retirement. The government will continue to pay its portion of the premium just as it does while you are employed.

Take Charge of Your Retirement

With any luck, you will spend longer in retirement than you did in your working career. To prepare for that crucial transition, review online guidance like what the Office of Retirement offers at https://RNet.state.gov. Pay special attention to guidance on steps to take from one to five years before retirement to ensure that your final retirement processing goes smoothly.

Once you do retire, maintain your AFSA membership to support the association’s efforts to protect your hard-earned Foreign Service retirement benefits from potential future cuts.

This article has focused on the financial aspects of retirement, because that is what most pre-retirees consider to be the key to a happy retirement. By contrast, surveys of current retirees show that they consider health care to be the most important factor. After all, having lots of money can only do so much for someone who is in chronically poor health.

Obviously, little can be done about genetics or bad luck with accidents and diseases, but steps such as maintaining a healthy weight, eating well, keeping fit and not smoking are keys to a longer, healthier retirement.

Here’s wishing you a happy retirement! 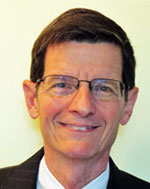 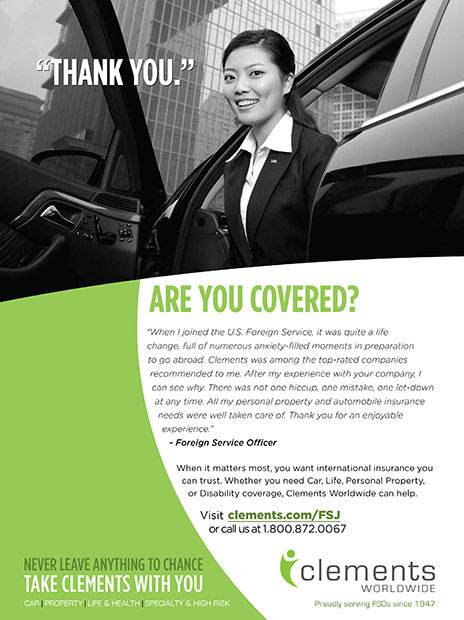 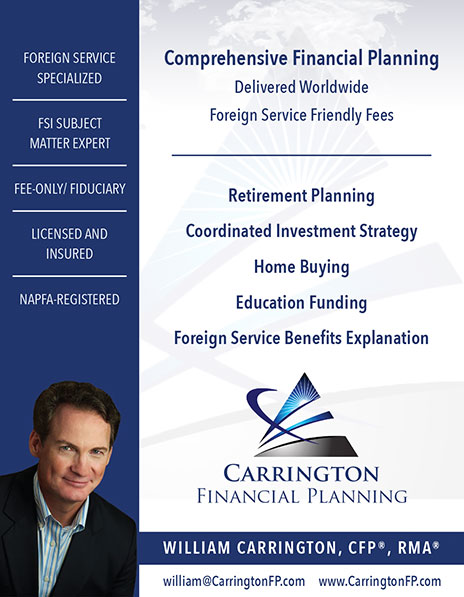 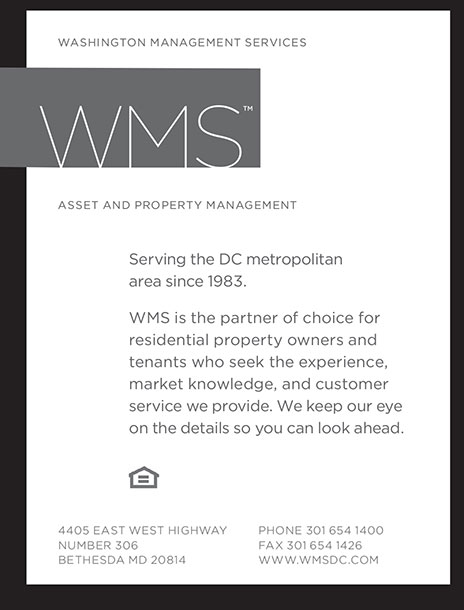 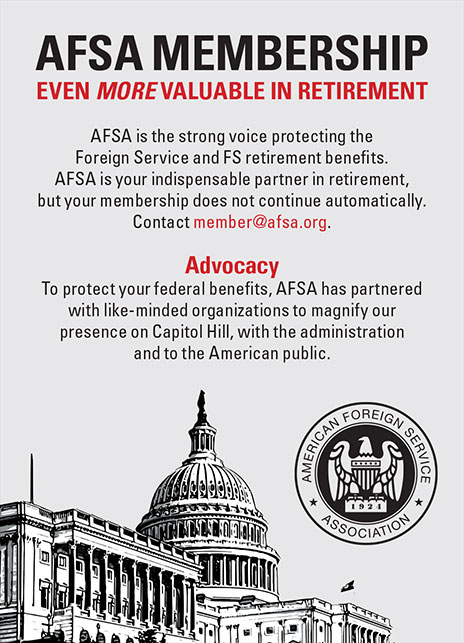