The Foreign Service Journal > May 2016 > Structuring the Conversation

Writing a year ago in the May 2015 edition of the FSJ, Director General Arnold Chacón described a vast and complicated foreign affairs landscape filled with a proliferation of actors and unprecedented threats—in short, a landscape that will require an American Foreign Service performing at the very top of its game.

“More than ever, we need the very best people: the ones who see past the horizon, who are curious, innovative, tenacious; who show initiative, judgment, resilience, adaptability and perseverance. We have always had those employees, but it’s more important than ever to attract and prepare a workforce for the future, bearing in mind that such attributes are often best learned and honed through real life experience,” he and co-author Alex Karagiannis wrote in one of the most-read FSJ articles of 2015.

I could not agree more, both with the DG’s assessment of the challenging environment and with the imperative that we continue to attract the best and brightest. I also agree that, for the most part, we learn best through real life experience.

Last month, I shared concerns about the potential impact of the increase in demand for consular adjudicators on the career path for new Foreign Service officers. We must never take for granted the fact that each year more than 17,000 Americans compete for one of the fewer than 400 entry-level FSO positions available. We must continue to attract and retain America’s best and brightest—and most committed—to carry out our vital and increasingly challenging mission.

AFSA has since weighed in with management in two letters. The first embraces the use of the limited non-career appointment (LNA) provisions of the Foreign Service Act as the best way to ensure State provides high-quality visa services while avoiding disruption of the career paths for new Foreign Service officers.

As the Bureau of Human Resources refines and improves the Consular Fellows program, more LNA consular adjudicators will come on board, alleviating the entry-level staffing gaps. For those struggling with the impact of these gaps, hang in there—relief is coming.

The second letter aligns AFSA firmly behind the Director General’s goal of ensuring that at least one of the first two tours for new FSOs be in cone.

These conversations will help fulfill my campaign promise to actively engage a broad range of members.

AFSA believes that a strong Foreign Service in the 21st century requires a personnel system that continually produces a deep bench of experienced, seasoned leaders. We build that deep bench when officers gain on-the-job training, starting early in their careers—hence our strong support for “one tour in cone.”

Over the coming months, supported by the new Professional Policy Issues directorate at AFSA, I will be holding a series of structured conversations to get a better understanding of how members are experiencing the Foreign Service.

Given concern from numerous quarters that it may be members in the mid-ranks whose commitment and engagement are most imperiled, we intend to begin the effort by engaging with that cadre.

These conversations will help fulfill my campaign promise to actively engage a broad range of members, not just wait to hear from you when you have a problem.

And turning to our seniors, this edition of the FSJ is devoted to life after the Foreign Service. One of the realities of our competitive, up-or-out Service is that some—maybe many—members reach time-in-service limits before they are fully ready to leave the Foreign Service.

I want to urge those facing these realities, which can feel harsh, to stay connected with AFSA after you leave active duty. Yes, AFSA can help you with networking and retiree benefits, and, yes, I hope you will participate in AFSA’s amped up outreach efforts.

But most of all I want to encourage you to think of AFSA as your home base after your service, as the way you stay connected to the Foreign Service community. If you lose touch, we’ll miss you. 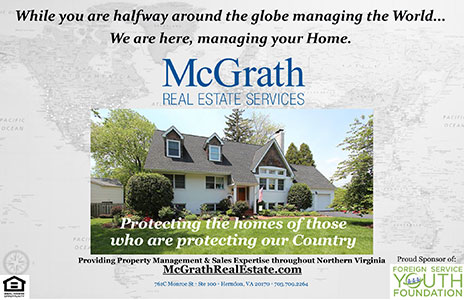