Setting Up Shop in Nuuk

The Foreign Service Journal > May 2021 > Setting Up Shop in Nuuk

In June 2020 U.S. diplomats reestablished a consulate in Greenland in what is now a fast-growing city that is coming into its own as a center for Arctic issues. 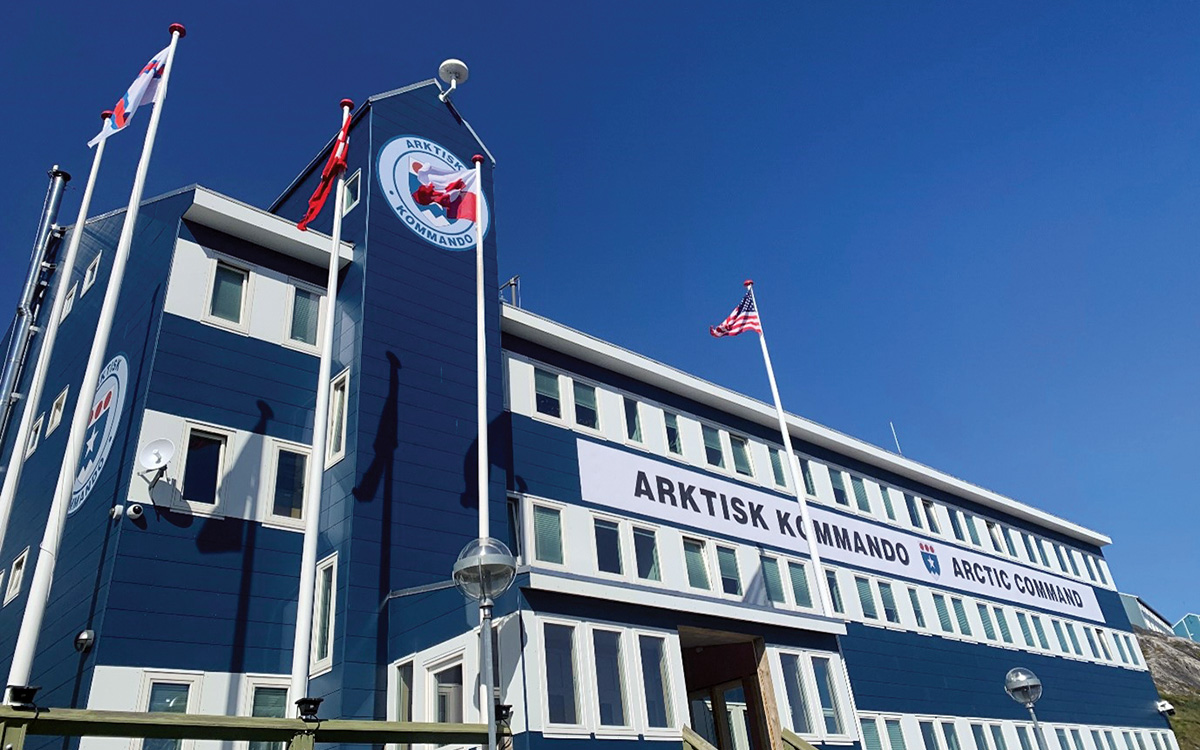 The U.S. consulate is currently housed at the Joint Arctic Command Office in Nuuk’s Back Harbor.
Eavan Cully 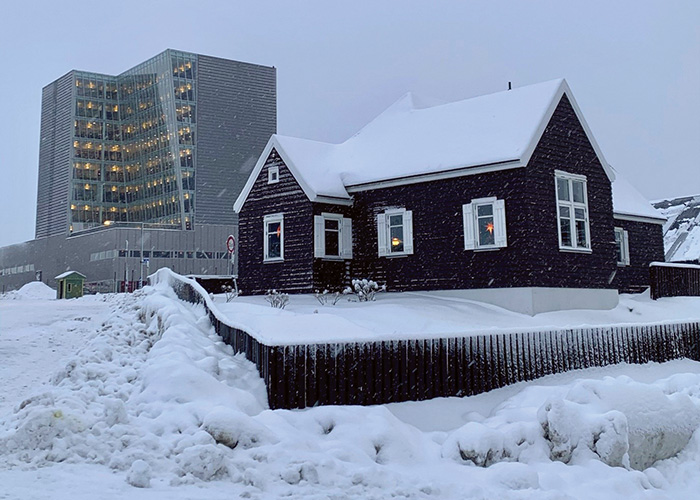 In 1940, following the Nazi occupation of Denmark, the United States opened its first consulate in Greenland. It was built in Godthaab, the capital of Greenland until 1979, when the town was renamed Nuuk. Godthaab had about 600 residents, and the new consulate building had to be mail-ordered from Sears, Roebuck & Co. Although that building still stands today, the town around it has grown significantly.

When the United States shuttered the consulate in 1953, it was a one-person outpost in a city of 1,600. The March 1954 Foreign Service Journal recorded the event: “Godthaab is gone. I know because I closed it. And so passes into history what surely was one of the strangest posts in the entire American Foreign Service,” wrote Consul Wayne W. Fisher in “The Passing of Godthaab.”

In June 2020 the new U.S. consulate opened in what is now a fast-growing city of 19,000 that is increasingly coming into its own as a center for Arctic issues.

When the international media focus on Greenland, it is generally to give alarming updates on the increasing melt from the only permanent ice sheet outside Antarctica, which covers three-quarters of the island. If the ice sheets in Greenland and Antarctica continue to melt at their current rates, scientists expect sea levels could rise 3 to 5 inches by the end of this century.

Millions of lives and livelihoods are in jeopardy as shorelines disappear and island nations sink below sea level. Other changes will occur, as well, as northern shipping routes become more navigable, fish species migrate in search of colder water and more. Greenlanders acknowledge these challenges— and opportunities—and seek a path of sustainable economic growth. 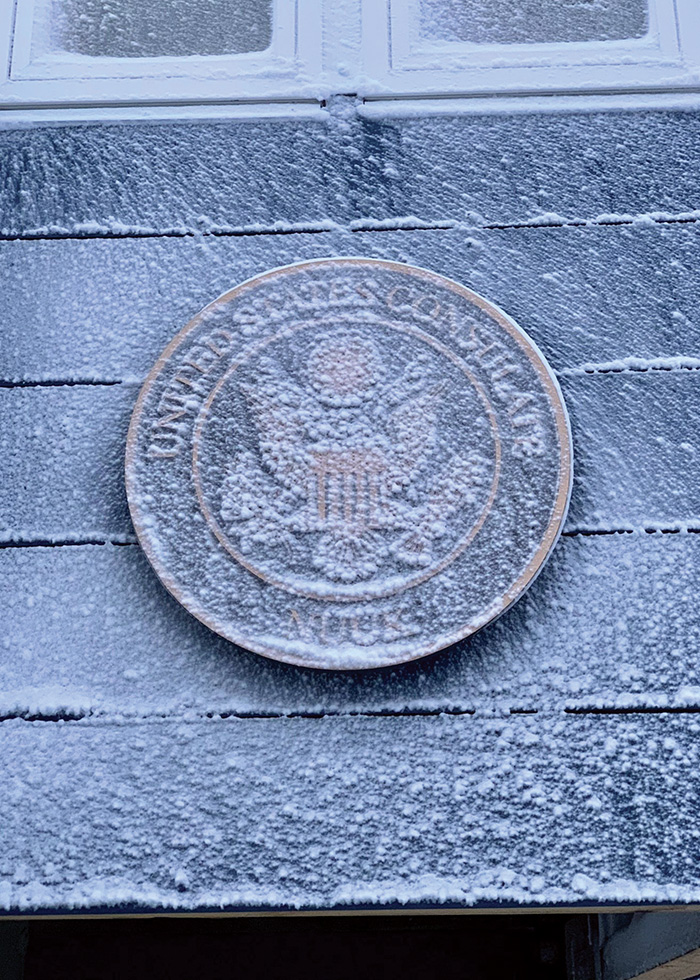 The Consulate Nuuk seal after a winter storm.
Eavan Cully

Every business, organization and institution on this island, which is an autonomous territory within the Kingdom of Denmark, is small by American standards. Greenland’s only university, Ilisimatusarfik, graduates fewer than 100 students a year; the Greenland branch of the World Wildlife Federation consists of a single person. The government ministers are often double- or triple-hatted: just last year there was a Minister for Foreign Affairs, Education, Culture and Church.

The challenges facing government and entrepreneurs in Greenland are enormous. Distant, small population centers remain unconnected by roads, serviced by costly air and sea travel dependent on the whims of difficult-to-predict weather. Accordingly, providing the domestic market with basic medical services and schools, not to mention fresh food or consumer goods, is a difficult task. While the capital is powered by renewable resources, many communities on the island depend exclusively on diesel generators for electric power.

Greenland’s main industry is fishing, which makes up approximately 95 percent of its exports and roughly a third of the island’s economy. Reliance on this growing but unpredictable industry makes Greenland potentially vulnerable to international commercial headwinds.

Other industries, such as tourism and mining, have potential to play a larger part in Greenland’s economy, but are still in their nascent stages. Greenland’s natural beauty is pristine and rugged in a way that would appeal to well-heeled adventure tourists, but the logistics, time and expense of getting to the island and traveling from one town to another present formidable obstacles. Mineral resource extraction could be another avenue for diversification of the economy, but the harsh Arctic environment coupled with local concerns over environmental impact have so far kept large mining operations at bay.

There are today a dozen honorary consuls in Greenland, all of them local businessmen. They represent the interests of the other Nordic states as well as countries such as France and Latvia and as far away as South Korea. Only the United States and Iceland have formal diplomatic presences on the island, however, with the Icelandic consulate general established in Nuuk in 2013. 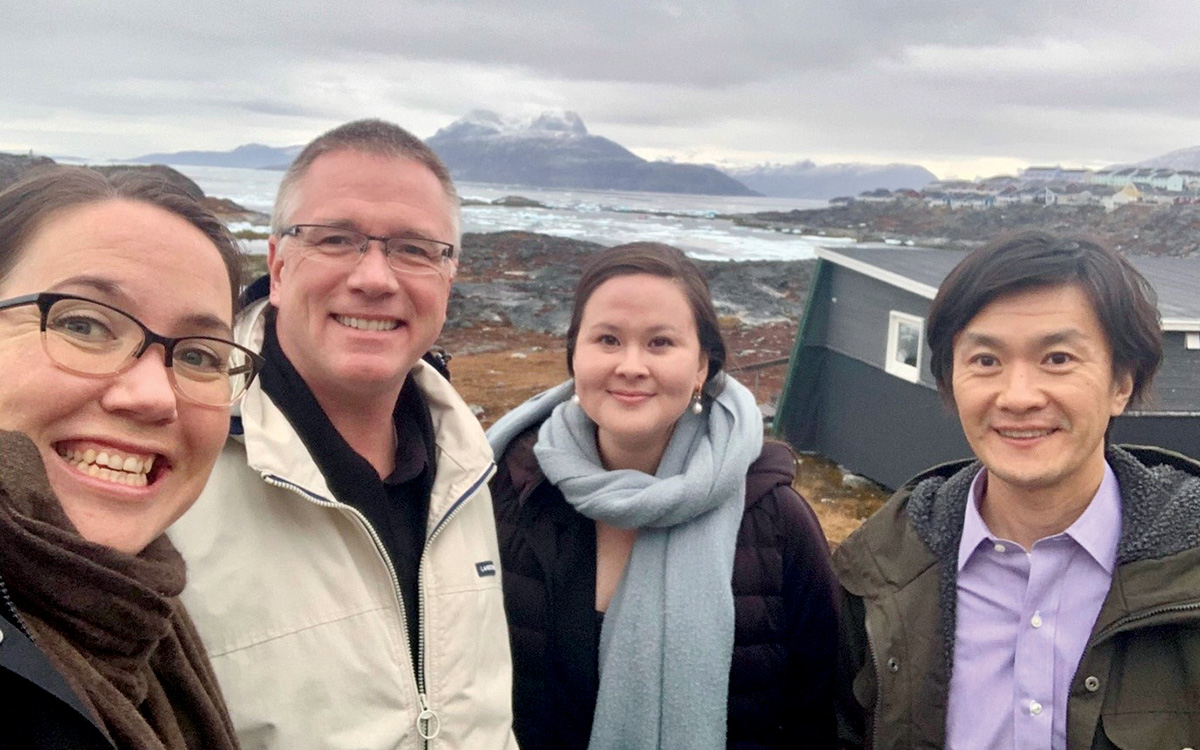 Momentum for a Broader Relationship

The military has played an important role in U.S. activities in Greenland for decades. Thule Air Base, our northernmost military installation, has been in operation since the early 1950s. Other former Air Force bases now serve as Greenland’s primary airports. According to a declassified Jan. 8, 1946, report to the Secretary of State on wartime activities from Consulate Godthaab, its responsibility at that time was “to act as a liaison capacity between the Greenland administration and the United States military and naval authorities in Greenland.”

Since the closing of Consulate Godthaab, the United States has conducted reporting and public diplomacy programming on Greenland from Embassy Copenhagen, including support for visiting American students and scholars to Greenland, which has recently become a popular research and exchange program destination. While this allowed us to keep generally apprised of what was happening here, it made it difficult to form lasting relationships. Many Greenlanders are used to well-intentioned people coming here for visits or for short-term jobs. But without a demonstrable commitment to the island, it is hard to gain the trust necessary for true relationship-building and partnerships.

During the past three years in Washington, Nuuk and Copenhagen momentum grew to broaden U.S.-Greenland ties, including in trade and investment, in education and tourism, and in mineral resources and energy. The mutual desire to create a stronger, healthier, multifaceted relationship helped launch our current consulate. Three officers from Embassy Copenhagen were assigned: Greenland Affairs Officer Sung Choi was named principal officer, and a public diplomacy officer, as well as a development adviser from USAID were soon added to the roster.

Plans for opening the consulate were well underway at the start of 2020, when the pandemic began its course around the world. With so much of the population on the island located in small, remote settlements with limited health care services and providers, it became imperative to prevent the spread of COVID- 19 to Greenland. When the consulate opened in June, Sung was the only American diplomat on the island. Instead of a reopening with customary pageantry, the consulate enjoyed an intimate gathering of Greenlandic and Danish guests.

Carefully bumped elbows replaced handshakes. The U.S. ambassador to Denmark delivered prerecorded remarks, thanking the Danish and Greenlandic governments for their steadfast support. The then-commander of Denmark’s Joint Arctic Command, Major General Kim Jørgensen, extended congratulations from the Danish foreign minister, who was unable to travel. “I am happy to welcome the U.S. back to Greenland,” Greenland’s then–Minister for Foreign Affairs Steen Lynge said in person. 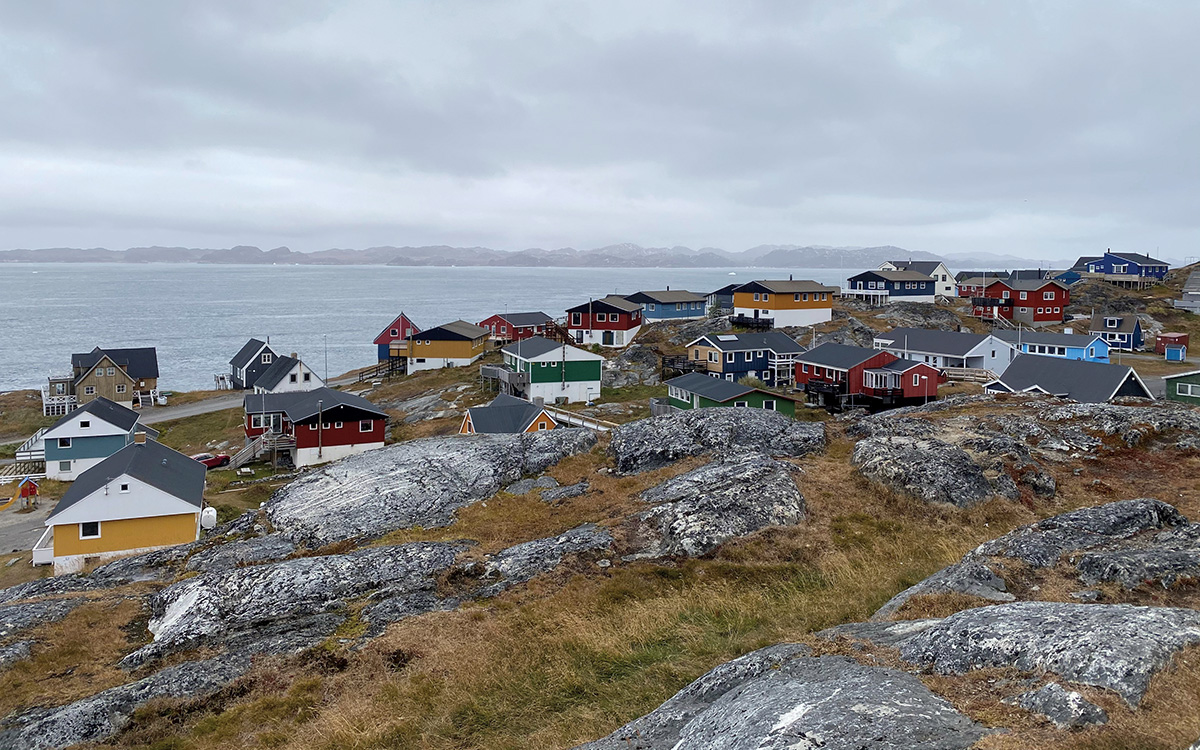 A view of Nuuk in October 2020.
Hillary Lebail 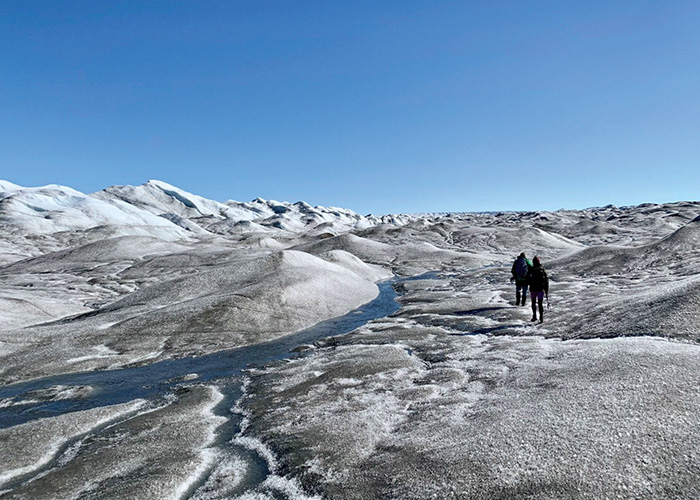 We are almost through our first year in operation, and we are building on the foundations laid by Embassy Copenhagen’s in-depth reporting, programming and relationship-building in the years leading up to the opening.

As a PD officer, I’ve been grateful for Greenland’s COVID-19 mitigation and the opportunity it has given us to do in-person outreach. Nuuk was one of the few posts in the world able to hold multiple in-person U.S. election-related events, which were critical to our messaging against disinformation. In keeping with the island’s reputation for ruggedness, last November’s election watch gathering went ahead despite a winter storm with gusts topping 100 mph.

In southern Greenland, I was able to give a presentation on the U.S. national parks to students studying to be Arctic guides for what Greenland hopes will be a growing (and sustainable) tourism industry. Working with our colleagues in Copenhagen’s environment, science, technology and health section, we have begun a series of virtual seminars connecting the U.S. Department of the Interior and its National Park Service to government and tourism stakeholders all across Greenland.

And last fall, we were proud to launch the Arctic Education Alliance, a collaboration between American and Greenlandic education institutions that will help strengthen the next generation of students, workers and entrepreneurs. These continued partnerships demonstrate to Greenlanders that we are committed, and that we are looking to build capacity in areas where they themselves are hoping to grow.

Beyond economic development, we want to also draw on the strong cultural and linguistic bonds that Greenland’s majority Inuit community have with those across the North American Arctic. The commonalities—from cultural identity to geography—between Alaska and Greenland underscore that America has a well of understanding as to the opportunities and challenges that define life and development paths in the far north. Before the pandemic, cultural envoys from Alaska helped bridge the gaps between us, hosting workshops on drum dances and musical traditions that connect Inuit cultures across the centuries of migration, colonization and growing autonomy.

Cultural centers around Greenland have not been shy in asking for more opportunities to engage with Alaskan Inuit and other American Indigenous groups. These cultural connections allow us to interact with young Greenlanders, and leave lasting impressions about our shared history and values.

While Greenland is not a low-income country, it is trying to diversify and expand its economy, industries and social systems in ways compatible with its infrastructure potential and population size. The USAID officer at post, David Brown, has facilitated a landscape analysis of the island’s capacity for growth, providing a baseline from which future projects can be planned and evaluated. Focusing on the potential for tourism development in Greenland, USAID has been engaging with stakeholders in the private sector and with government agencies across multiple municipalities, looking for opportunities for investment in areas where Greenland could expand domestic employment and education.

The consulate secured temporary office space within the Danish Joint Arctic Command headquarters in Nuuk until our dedicated space in the center of the city can be developed. Local staff hiring has been sluggish, but we have an office manager who is a miracle of productivity and efficiency. We continue to work closely with U.S. Embassy Copenhagen on reporting, programs and events as we work out the nuts and bolts of diplomatic life in Greenland—from working with government ministries to set up the mechanics for academic exchanges to finding ways to receive and deliver diplomatic mail.

When Consul Wayne Fisher closed the first U.S. consulate in Greenland in 1953, he lamented: “It was with some emotion that I had to take down the insignia over the entrance and lower the flag for the last time. Not only because of my personal feelings of regret at having to haul Old Glory down in this remote land, but because it had come to mean so much to the Greenlanders as a symbol of American friendship for and interest in them.”

On June 10, 2020, at the consulate opening, Principal Officer Sung Choi said: “This is truly a special occasion for us in the U.S. government as we are reopening our presence in Nuuk for the first time since 1953. … We are back with a committed diplomatic presence that serves to strengthen ties with all of Greenland’s communities.”

At noon, Sung hoisted the American flag once more in Greenland, and cabled out that we had begun official operations. While the flag has frozen to the pole a few times since then, we are proud to have it flying again as a testament to the deepening U.S. relationship with Greenland, and the entire Kingdom of Denmark. 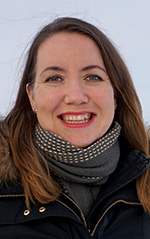 Eavan Cully is the public affairs officer at U.S. Consulate Nuuk. She joined the Foreign Service in 2015 and has also served in Vancouver and Beijing, and in the Bureau of Educational and Cultural Affairs in Washington, D.C. 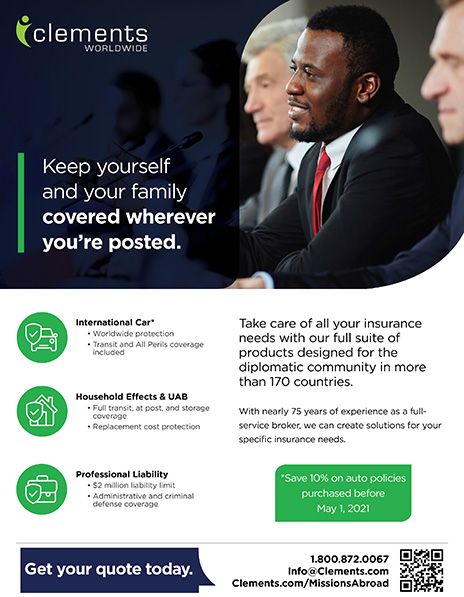