The May issue focuses on Arctic diplomacy. 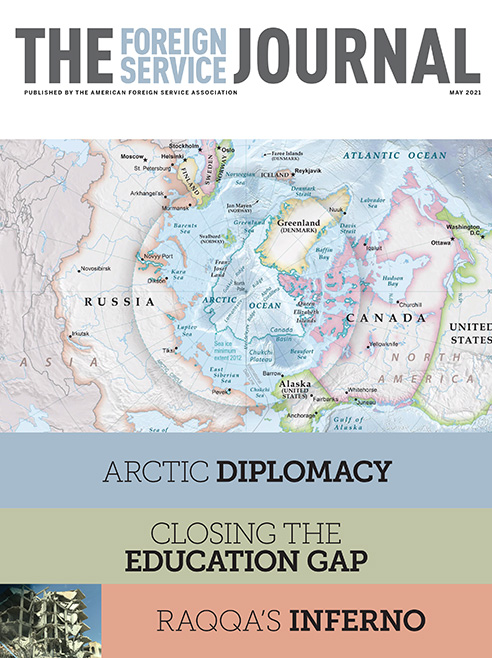 To reclaim leadership in handling international problems, State must increase investment in professional development of its greatest asset: its people.

Advancing U.S. Diplomacy in the Arctic

Despite challenges posed by Russia and China, the Biden administration has a chance to further constructive, cooperative relations among nations concerned with the Arctic.

A Balanced Approach to the Arctic—A Conversation with U.S. Coordinator for the Arctic Region James P. DeHart

The Arctic is a place of cross-cutting interests—security, science and economic development, among others—and the different pieces need to fit together.

Setting Up Shop in Nuuk

In June 2020 U.S. diplomats reestablished a consulate in Greenland in what is now a fast-growing city that is coming into its own as a center for Arctic issues.

Iceland has worked to address priority challenges—economic growth, social inclusion and environmental protection—during its chairmanship of the Arctic Council.

Can the Arctic’s unique distinction as a zone of peace be maintained? “The Arctic Senator” explains what it will take.

For this FSO, Dante’s imagery in The Inferno seemed to capture the depth of suffering and destruction he saw.

A Victory Against McCarthy—The Bohlen Confirmation

How the 1619 Project Can Help Public Diplomacy

The Importance of Leadership Training

What a Difference a Year Makes