We all have experienced difficult bosses in our Foreign Service careers. You know the type, those who explode at the drop of a hat and who appear all too comfortable shouting at and intimidating their staff, ostensibly to get better results—as if we are not a highly motivated workforce to begin with.

I remember one former supervisor, a very senior Foreign Service officer, who would get so worked up that items within reach (pencils, usually) were thrown at hapless subordinates.

Another highly successful senior FSO focused on making staff feel uninformed (and less motivated over time) by gratuitously asking irrelevant questions at daily briefings until he found questions for which there were no answers.

When, at one of my counseling sessions, I asked him what he hoped to achieve by acting in this way, he just smiled and said he had been told that before—and nothing changed.

At times, despite such behavior, these supervisors manage to produce results for higher management. And so we have a culture at State that largely gives a pass to managers to behave in an unacceptable, bullying manner.

But couldn’t they achieve the same results without resorting to bullying? And what can be done to mitigate this problem?

The System Now. The department has well-defined processes, based on law and regulation, in place for dealing with Equal Employment Opportunity, discipline and grievance matters. If you want to bring an EEO complaint, discipline an employee, contest a discipline proposal or file a grievance, it’s clear what you have to do.

One of our grievance counselors in the AFSA Labor Management office has told me, however, that many of the issues AFSA sees are workplace conflict issues, not grievances.

Unfortunately, when people bring them forward, there is no clear path to resolution. AFSA can only make suggestions: try this or try that.

The problem is that workplace conflict issues cover a broad spectrum, and many of them don’t fall neatly into any of the official conflict resolution categories listed above. Thus, there is no clearly defined path to elevate and resolve them.

There is an informal grievance process spelled out in 3 FAM 4430, but very few people know of it. Moreover, it is not a mandatory means of conflict resolution and is seldom followed.

People experiencing workplace conflict issues can attempt to talk with their supervisors, get GTM involved or raise the issue with the ombudsman.

But participation by the supervisors in informal workplace conflict resolution is largely voluntary. If they don’t want to meet with the employee or with the ombudsman, they are not obliged to. And human resource officers, management officers and executive directors differ in their ability and willingness to address such conflicts.

Establish the Office in GTM. The department needs a standardized mechanism for addressing and resolving workplace conflict that is distinct from EEO, discipline or grievances and that is administered at the Washington level.

Unlike the ombudsman’s office, which can only issue recommendations, this new mechanism would issue decisions that are binding on both parties.

Participation would be strongly encouraged or even made mandatory; neither employees nor supervisors would be able to refuse to participate once one party invokes the process.

The goal would be to benefit both supervisors and employees by resolving conflicts before they escalate. Employees would have a clear path for elevating complaints about supervisors. Supervisors would also be able to use the process to deliver a reality check to employees who are making baseless complaints.

The department would need to decide on the consequences for failure to abide by a decision.

In 2019 the department stated its intent to establish such a process by expanding the duties of the ombudsman’s office. While the decision on this is up to the department, AFSA recommends that a separate “Office of Conflict Resolution” within the GTM bureau, perhaps in Employee Relations, be established instead.

State’s Office of the Ombudsman has worked hard to establish itself as distinct from GTM and not involved in any way in discipline. Placing this function in that office might create confusion about the mission of the ombudsman.

With a huge pent-up demand for such a conflict-resolution mechanism, AFSA will engage the department to move ahead with this idea and staff the new office with enough people, including support staff, to ensure that cases can be handled swiftly.

If a complainant needs to wait weeks or months to start the process, the purpose of establishing the office is undermined.

Please let us know what you think at member@afsa.org. 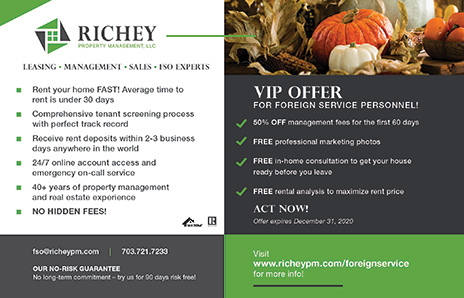