There’s so much in this issue worth highlighting—from the bountiful collection of books by FS authors this year to the bold Speaking Out from six Black women diplomats, and from the remarkable account of discovering overlooked diplomats to the heartbreaking look at Africa’s Sahel region. We even get a glimpse of Nuuk from the new Arctic envoy.

“On Trust” is a timely message on what is needed now in U.S. diplomacy.

George Shultz believes in the Foreign Service and in the everyday work of building and maintaining relationships. He has often compared diplomacy to gardening, a wise analogy that bears repeating now. In an interview with Jim Goodby for the December 2016 FSJ, Shultz spelled it out:

“If you plant a garden and go away for six months, what have you got when you come back? Weeds. And any good gardener knows you have to clear the weeds out right away. Diplomacy is kind of like that. You go around and talk to people, you develop a relationship of trust and confidence, and then if something comes up, you have that base to work from.

“For example, I got to know Wu Xueqian, who was the Chinese foreign minister, and we had a good relationship. I remember him saying to me once: ‘OK, George, you wanted to get to this point, and you are trying to go about it in a certain way. That way is very hard for us, but if you can come at it in a little different way, we can get where you want to go.’

“I said, fine, and we did. But that kind of progress does not happen unless you have gardened.”

I’d wager that any U.S. diplomat who was in the Service in the late 1980s remembers when George Shultz was Secretary of State with nostalgia and admiration for how he practiced diplomacy. His example is woven into the fabric of our collective experiences of the past 40 years.

When I was a college intern on the Soviet Desk, I helped update the lists of refuseniks—primarily Jews in the USSR who had been denied the right to emigrate—that Secretary Shultz would regularly share with the Soviet Foreign Ministry during high-level meetings, requesting attention to those cases, freedom for those people.

During one of his visits to Moscow, in February 1988, he attended a reception for refuseniks at an embassy residence. As he worked the room, he greeted the guests individually. He knew their names, and he told them he was working for their freedom. This was human rights work, up close and personal. It was inspiring.

I was helping out at that reception (then in Moscow as a nanny and local hire for the political section). When the Secretary stopped to greet a couple I was talking with, he mistook me for their daughter and said he had just been talking about us in Seattle. The photographers in tow captured the moment.

What was remarkable was that Shultz knew who Yelena and Ilya Bezprozvani were, and he knew their case. That was typical; that was George Shultz, and it meant so much.

Eventually, just about everyone on his lists was allowed to emigrate.

May we all keep his legacy in mind as we continue the vital work of tending the global garden. 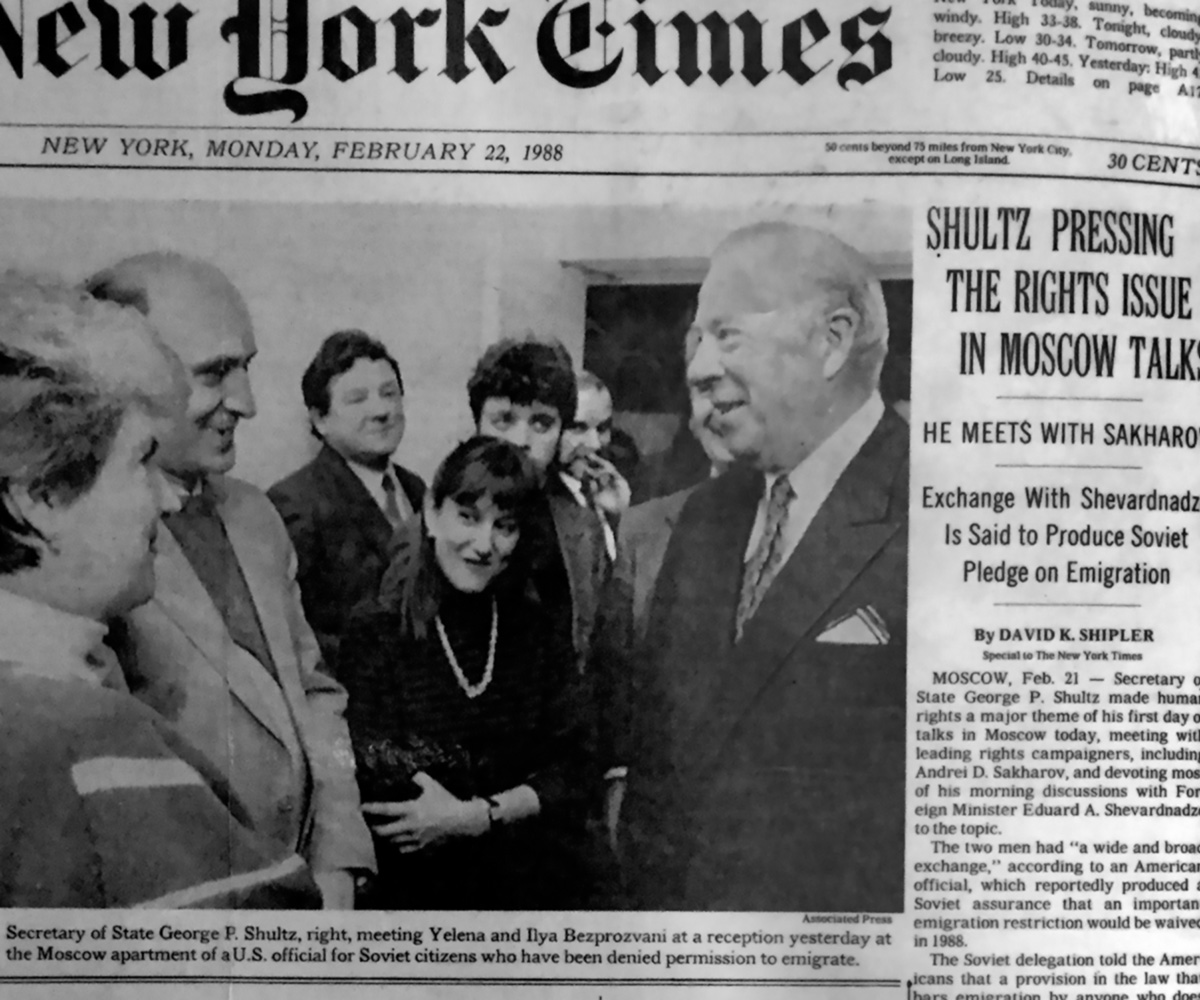