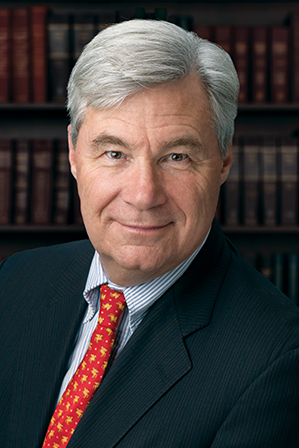 For nearly a decade, I have co-led the U.S. Senate delegation to the annual Munich Security Conference, first with the late Senator John McCain (R-Ariz.) and now with Senator Lindsey Graham (R-S.C.). Each year, I have elevated two closely linked issues that will shape our foreign policy for generations: climate change and international corruption. Both demand urgent action.

It will take time and persistence to rebuild American credibility on these issues, but a pair of important international meetings could jump-start that process. The first is the United Nations’ 26th Climate Change Conference of the Parties (COP) this month in Glasgow; the second is President Joe Biden’s Summit for Democracy, which will bring together international partners to address global corruption. Success at both will set a promising course for U.S. foreign policy in the decades ahead, and both will rely heavily on the skill and experience of our Foreign Service. Our hopes rest with you.

Our Last Chance on Climate

America enters Glasgow with depleted credibility on climate change. We are emerging from four years under an American president who spouted climate denial, populated his administration with polluter lobbyists and lawyers, and advanced the fossil fuel industry’s corrupting work against climate protections. Trump pulled the United States out of the global climate accord that we, ourselves, helped negotiate. Worst of all, he cost us four years as climate destruction accelerated around the globe.

Blame doesn’t fall solely on Trump, however. A Democratic president with a Democratic Party–controlled Senate refused to push forward the comprehensive climate bill passed through the House by Speaker Nancy Pelosi in 2009. The Supreme Court’s decisions loosed an avalanche of political money into our politics that cost the U.S. more than a decade of climate progress. America’s fossil fuel industry deployed a massive dark-money apparatus to control our politics and stymie significant climate action.

Glasgow is our last chance to lead the world in the race against climate catastrophe. The U.N.’s latest Intergovernmental Panel on Climate Change report—the gold-standard climate assessment—warns of as much as 4 degrees Celsius of warming from pre-industrial levels by the end of the century. We must act swiftly or risk runaway sea level rise, searing heat waves, cataclysmic storms and other calamities, with grave consequences to national security and world order.

The U.S. will come to this COP as substantial climate legislation is in the works. If the budget bill remains an ambitious one—in keeping with the 1.5 degrees Celsius threshold for safety set by scientists—the United States will be credible to lead again, to achieve an effective international climate accord. In the hands of Special Envoy John Kerry and the State Department’s climate team, a meaningful, enduring agreement will be within reach.

The last century was the American Century because of American leadership, and humanity is safer and more prosperous as a result. The fossil fuel industry’s malign manipulation of our democratic process is an aberration. The world needs America, and I am confident that you, the members of the Foreign Service, can guide us back to our traditional position of leadership.

Following Glasgow, President Biden will convene fellow democracies to address the scourge of international corruption. The president’s “Summit for Democracy,” set for Dec. 9-10, will focus on corruption’s ties to authoritarianism and related threats to human rights. The United States and our partners will forge new anti-kleptocracy principles and commitments, then meet again in a year to gauge progress toward those goals.

Biden is wise to focus on international corruption. America is now in a clash of civilizations between rule-of-law democracies and nations corrupted by autocrats, kleptocrats and international criminals. These foes of democracy nurture a dark realm of international theft, brutality and criminality that the rule of law would thwart.

The summit’s first objective should be to understand our adversaries’ mixed motivations. Kleptocrats and criminals want to degrade our rule of law, and dim the beacon of hope we offer the people they rob and oppress. But their greed drives them to seek rule-of-law protection in countries where their pelf is safe from the next crook or strongman who might come after them. The result has been an explosion of illicit investments hiding in rule-of-law jurisdictions.

The twin fights against climate change and corruption have intertwined to test our American example.

To our shame, the United States has become one of the principal shelters for corrupt assets. Secrecy is key in this dark economy, and our system allows billionaire oligarchs or corrupt state-sponsored enterprises to hide illicit wealth behind webs of American shell corporations, complex real estate transactions and other schemes.

According to one study of 60 countries, found in the 2014 book Global Shell Games, only Kenya makes it easier than the United States to set up anonymous shell companies. The United States is one of the best places to find professionals—lawyers, accountants, realtors and others—who will help hide dirty money. While we have begun to address some of this mischief—such as the shell corporation transparency requirements I helped to pass last year—we still aid and abet dangerous adversaries by helping them hide their loot.

This shouldn’t be the case. American laws, such as the Foreign Corrupt Practices Act, are model safeguards against corruption. And our law enforcement agencies, from the Treasury Department’s Financial Center to the FBI, are among the most effective cops on the global anti-corruption beat. But for too long we have tolerated those who service kleptocrats and criminals in our country, and for too long we have failed to join in common cause against the dark economy’s servants in other countries. It is in our national security interest to help rid the world of the dark economy. We can, and must, do better.

Where Climate and Corruption Meet

The fights against climate change and corruption intertwine. Fossil fuel money has been a persistent source of corruption around the world. The doctrine of the “resource curse” arises from this phenomenon. As Senator Graham and I recently wrote, the world will be a safer place without fossil fuels, if only for reducing the ability of Russia, Iran and Saudi Arabia to work murderous fossil-fueled mischief. Our corrupt adversaries in the clash of civilizations will threaten faithful implementation of ambitious climate policy. The sooner and more forcefully we act on these twin problems, the better our chances of success on both.

A particularly dangerous crucible of conflict is Kashmir, which faces water security challenges driven by climate change. Even at the 1.5 degrees Celsius of global warming scientists say could be safe, research suggests temperatures across most of the Himalayas will rise an average of 2.1 degrees Celsius. This will cut the Himalayan glacier mass by more than a third by 2100, reducing annual ice melt correspondingly. Reduced river flow will take its own toll; the U.S. Institute of Peace warns of the prospect of rampant sickness, hunger and economic calamity, which could, “in turn, open the door to conflict.” 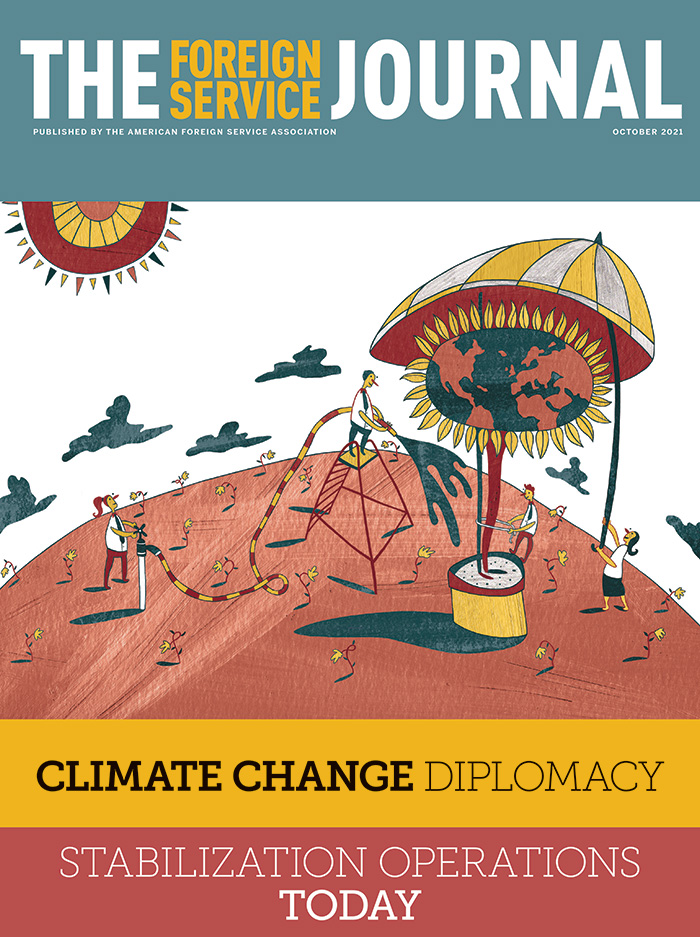 Worse yet, Kashmir is already a flashpoint between two nuclear-armed adversaries, India and Pakistan, who have a history of riparian conflict. An Indian parliamentary panel has spotlighted climate change as a challenge to distributing scarce Himalayan water among Indian and Pakistani downstream regions. India plans to build new dams on the Chenab River in Kashmir; Pakistan fears that India will pinch the Chenab’s flow into the Indus through Pakistan, perhaps as a lever on Islamabad in times of conflict. Suspicions of riparian mischief run high, and memories of conflict linger. Food security, power generation and public safety are all at stake, giving the nuclear-armed adversaries a lot to fight over.

Corruption in the region makes matters worse. The Observer Research Foundation notes “widespread and deep-rooted corruption in [Kashmir] has restricted the growth potential of the state” and “pose[s] national security threats.” Corruption linked to shoddy construction of Indian dams adds a public safety and security threat in a region with frequent seismic activity. Were a dam to fail, a flood would descend on Pakistanis downriver—what has been called a “water bomb”—on the Indus. Climate change, water scarcity, regional hostilities, festering strife, riparian competition and nuclear weapons make a dangerous cocktail; crooked deals and shoddy dams risk an added provocation in an already unstable situation.

As Senator McCain once wrote, kleptocrats like Putin don’t “believe that human nature at liberty can rise above its weaknesses.” They don’t trust the rule of law or the will of the people; instead, they rule by “corruption, repression and violence.” To prevail against the likes of Putin, we must remember that the world is, as President Bill Clinton said, “more impressed by the power of our example than by the example of our power,” and that leadership on the biggest challenges before us is the example we must set.

The twin fights against climate change and corruption have intertwined to test our American example. American diplomats and domestic policymakers alike must form a plan to meet these challenges in the days and months ahead. Human safety, in the form of a livable planet led by honest democracies, is at stake.

In the face of these immense diplomatic challenges, I take comfort that our Foreign Service has proven equal to immense challenges before. I witnessed firsthand the often unglamorous, but exceedingly effective work that my father and fellow Foreign Service members performed under trying conditions. Their devotion to country and mission helped set the American example we need so dearly in this moment, a devotion I know you share. 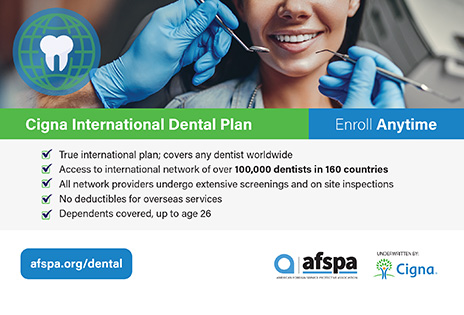