Recent books of interest to the foreign affairs community that were not written by members of the Foreign Service.

Engaging the Evil Empire: Washington, Moscow, and the Beginning of the End of the Cold War 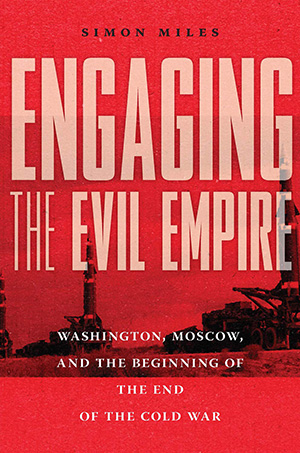 Referencing newly available archives on both sides of the Iron Curtain, Simon Miles concludes that it was President Ronald Reagan’s first term (1981-1985) that paved the way for the end of the Cold War and the Soviet Union’s demise, more than his second. He credits Reagan with a grand strategy that made deft use of carrots (“quiet diplomacy” and diplomatic agreements) and sticks (“peace through strength,” i.e, a massive arms buildup) to gain the upper hand over Moscow.

Whatever credence readers give to that argument, they will be fascinated by the other story Miles tells: how the four Soviet leaders Reagan dealt with during his first term played an increasingly weak strategic hand.

Simon Miles, an assistant professor in the Sanford School of Public Policy at Duke University, has published research articles in the Journal of Cold War Studies (2020), Diplomatic History (2016) and Diplomacy and Statecraft (2013). 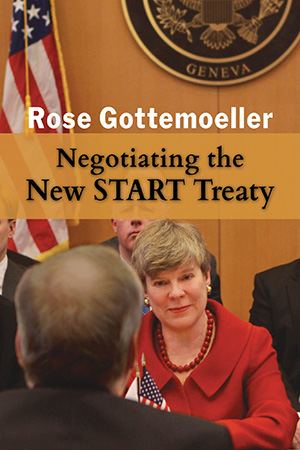 Veteran arms control negotiator Rose Gottemoeller wryly concludes her prologue by declaring that “Negotiating a nuclear treaty is not rocket science.” Indeed, this inside account of how she and her team overcame a host of obstacles to conclude the New Strategic Arms Reduction Treaty, and gain Senate ratification, makes clear just how much more the job requires.

Reviewing this book in the July-August Foreign Service Journal, Ambassador (ret.) Laura Kennedy says: “Gottemoeller gives us a unique window on the only bilateral U.S.-Russian arms control agreement still in force. Whether one is an arms control specialist, a generalist diplomat or an international relations scholar, Negotiating the New START Treaty is an invaluable case study in the art of negotiation with relevance for the years ahead.”

Rose Gottemoeller served as assistant secretary of State for arms control, verification and compliance from 2009 to 2010, followed by five years as under secretary for arms control and international security. She was Deputy Secretary General of NATO from 2016 to 2019. She currently teaches at Stanford University and is a research fellow at the Hoover Institution.

This book received the American Academy of Diplomacy’s Douglas Dillon Award this year. 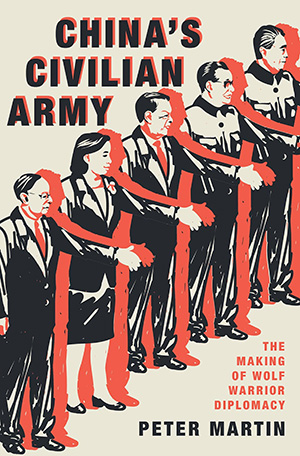 Even FSJ readers who do not follow Chinese diplomacy closely have almost certainly heard of “wolf warriors”—officials infamous for their combative approach to asserting national interests. The March meeting between Secretary of State Antony Blinken and Chinese Foreign Minister Yang Jiechi was a prime example of this phenomenon, but journalist Peter Martin cites many others in China’s Civilian Army: The Making of Wolf Warrior Diplomacy.

Despite broad multilateral efforts such as the Belt and Road Initiative, wolf warrior diplomacy is increasingly generating pushback from other governments, particularly in Asia. As Beijing decides whether to recalibrate its approach accordingly, Martin’s interviews with dozens of Chinese officials offer a rare perspective on the tactic.

Peter Martin is a political reporter for Bloomberg News who has written extensively on escalating tensions in the U.S.-China relationship, and reported from China’s border with North Korea and its far-western region of Xinjiang. 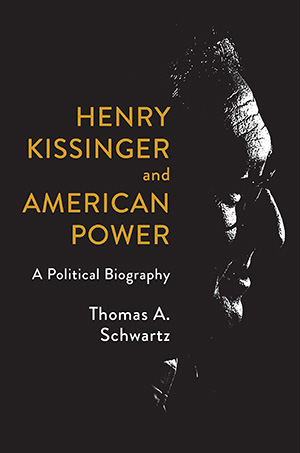 Though he has been out of government for more than 40 years, former National Security Adviser and Secretary of State Henry Kissinger remains the most prominent diplomat of the postwar era for most Americans. To fully understand Kissinger and his legacy, Thomas A. Schwartz maintains, one must see him as a political actor, a politician and a man who understood that American foreign policy is fundamentally shaped and determined by the struggles and battles of American domestic politics.

Thomas A. Schwartz is Distinguished Professor of History at Vanderbilt University, where he specializes in the foreign relations of the United States. He has served on the U.S. State Department’s Historical Advisory Committee and as president of the Society of Historians of American Foreign Relations. Henry Kissinger and American Power is his third book.

They Call It Diplomacy: Forty Years of Representing Britain Abroad 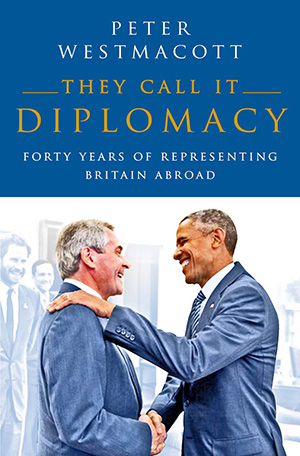 If Peter Westmacott had done nothing else in this memoir but regale readers with tales of a four-decade diplomatic career, it would be fascinating enough. But on top of that, They Call It Diplomacy explains what diplomats actually do; mounts a vigorous defense of the continuing relevance of the diplomat in an age of instant communication, social media and special envoys; and details what Westmacott sees as some of the successes of recent British diplomacy.

Peter Westmacott was a British diplomat for more than 40 years. He began his career in pre-revolutionary Iran and rose to become ambassador to Turkey, France and finally the United States, where he represented the United Kingdom during the second term of President Barack Obama and Vice President Joe Biden between 2012 and 2016.

The Afghanistan Papers: A Secret History of the War 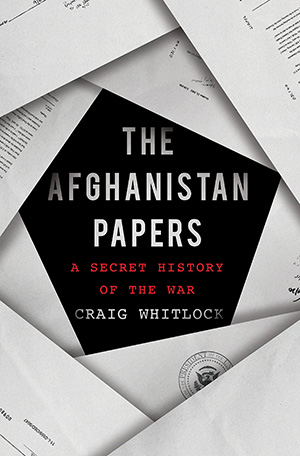 Arriving exactly 50 years after the original “Pentagon Papers” were published, this volume is our generation’s version of that bombshell. Yet, surely, even journalist Craig Whitlock could not have anticipated just how timely his survey of the past two decades of American involvement in Afghanistan would turn out to be.

Reviewing the book in the October Foreign Service Journal, retired FSO Edmund McWilliams calls it “a timely, dispassionate contribution to our understanding of America's nearly 20-year engagement in Afghanistan, a failed adventure that cost thousands of American and NATO partner lives. … It is an essential resource.”

Craig Whitlock, an investigative reporter for The Washington Post, has covered the global war on terrorism since 2001. In 2019, his coverage of the war in Afghanistan won the George Polk Award for Military Reporting, among many other honors.

The Middle Way: How Three Presidents Shaped America’s Role in the World 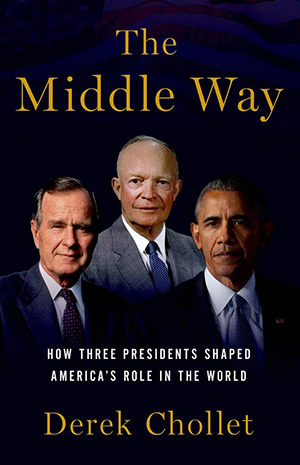 Presidents Dwight Eisenhower, George H.W. Bush and Barack Obama—two Republicans and a Democrat—may not seem to have a lot in common. But The Middle Way makes a compelling case that by taking a centrist approach to international affairs, all three leaders rose above partisanship and surmounted historical amnesia to make lasting diplomatic gains.

Former Deputy Secretary of State William J. Burns calls this book “an important, timely, elegant and provocative work of diplomatic history from one of the finest thinkers and practitioners of his generation. If Americans are ever to find their way again in the world, this book is an essential starting point.”

Derek Chollet served the Obama administration in senior positions at the White House, State Department and Pentagon. He was also executive vice president of the German Marshall Fund of the United States, and a visiting scholar at the University of Pennsylvania. He is currently the Counselor of the State Department. 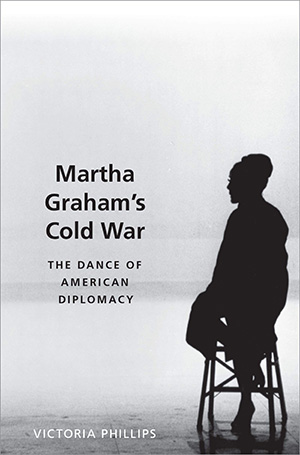 During the Cold War, modern dance (like jazz and avant-garde painting) was seen as an art form embodying American values of individualism and freedom. Accepting the State Department’s repeated invitations, dancer Martha Graham and her troupes enthusiastically represented the United States all over the world for some 30 years, under every president from Dwight D. Eisenhower through Ronald Reagan.

Victoria Phillips analyzes the aesthetic and political philosophy underpinning Graham’s choreography, and discusses her performances. As the book’s title indicates, she concludes that Graham truly multiplied the power of American cultural diplomacy through the unfettered language of movement and dance.

Victoria Phillips specializes in Cold War history, cultural diplomacy and international relations. Her articles have appeared in publications ranging from The New York Times and American Communist History to Dance Chronicle and Dance Research Journal, and she has curated exhibits on dance and politics in Europe and Washington, D.C. 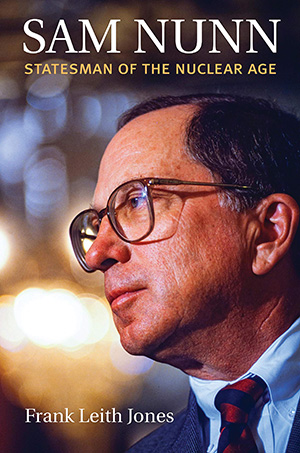 In 2009, AFSA conferred its Lifetime Contributions to American Diplomacy Award on Sam Nunn, who had just stepped down from the Senate after four terms representing Georgia. This biography underscores just how eminently worthy he is of such recognition.

In this first full account of Nunn’s senatorial career, Frank Leith Jones reveals how, as a congressional leader and “shadow secretary of defense,” he helped win the Cold War, constructing the foundation for the defense and foreign policies of the 1970s and 1980s that secured the United States and its allies from the Soviet threat.

The Enduring Struggle: The History of the U.S. Agency for International Development and America’s Uneasy Transformation of the World 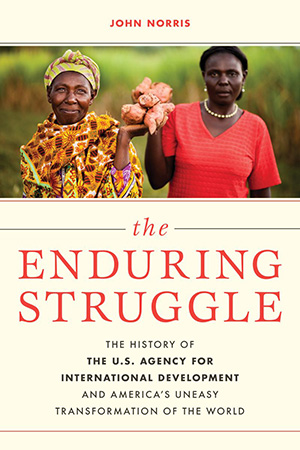 This year, the U.S. Agency for International Development marks its 60th anniversary. As journalist and foreign policy expert John Norris details in this unofficial but thorough history, the agency can fairly lay claim to triumphs including the eradication of smallpox, the Green Revolution and family planning programs. Yet it has also experienced failures in places such as Vietnam and Iraq. Whatever the balance of successes and setbacks, USAID continues to improve millions of lives all over the world.

John Norris has served in a variety of senior roles in government, international institutions and nonprofits. In 2014, President Barack Obama appointed him to the President’s Global Development Council, a body charged with advising the administration on effective development practices. Norris currently works at the Bill and Melinda Gates Foundation. (See his article in this issue.)

The Second Cold War: Carter, Reagan, and the Politics of Foreign Policy 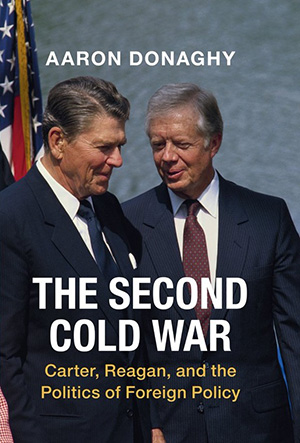 Focusing on the critical period between 1977 and 1985, Aaron Donaghy examines the complex history of America’s largest peacetime military buildup—which was, in turn, challenged by the largest-ever peacetime antiwar movement. He explains how domestic politics shaped dramatic foreign policy reversals by Presidents Jimmy Carter and Ronald Reagan, and analyzes both why the Cold War intensified so quickly during this period, and how, against all odds, Washington and Moscow repaired their relationship.

Drawing on recently declassified archival material, The Second Cold War challenges conventional wisdom on how and when the end stage of the Cold War began.

Aaron Donaghy teaches American history and international history at University College Dublin. He has previously taught at Harvard University and held research fellowships at Cornell University and the University of Cambridge (Churchill College).

Losing the Long Game: The False Promise of Regime Change in the Middle East 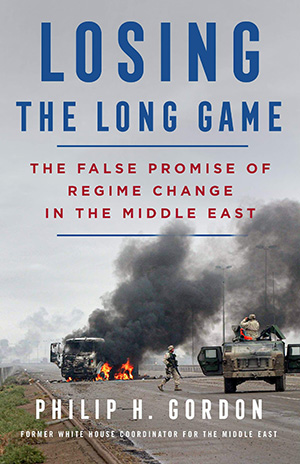 Since the end of World War II, the United States has set out to oust governments in the Middle East at least once a decade. Philip H. Gordon’s in-depth assessment of those episodes gives readers an insider’s view on U.S. policymaking at the highest levels. It is the story of repeated U.S. interventions in the region that always start out with high hopes, and often the best of intentions, but never turn out well.

Philip H. Gordon is the Mary and David Boies Senior Fellow in U.S. Foreign Policy at the Council on Foreign Relations. He served as a special assistant to President Barack Obama and as White House coordinator for the Middle East from 2013 to 2015, and as assistant secretary of State for European and Eurasian affairs from 2009 to 2013. 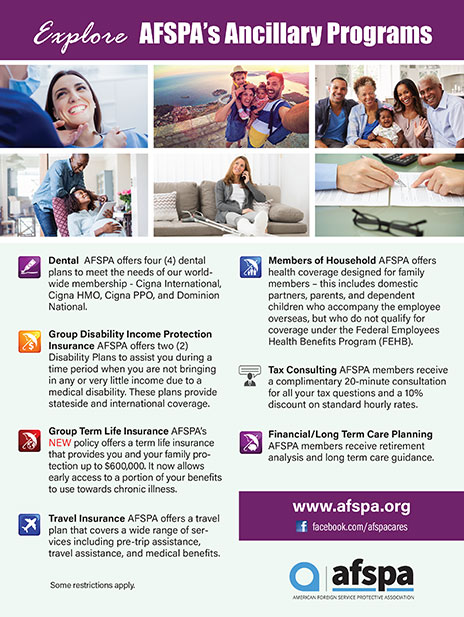 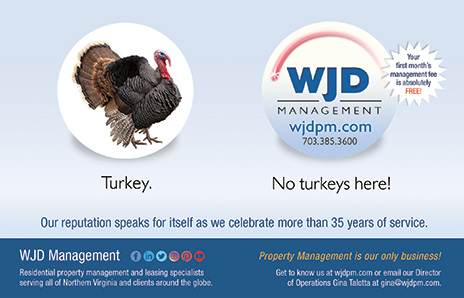 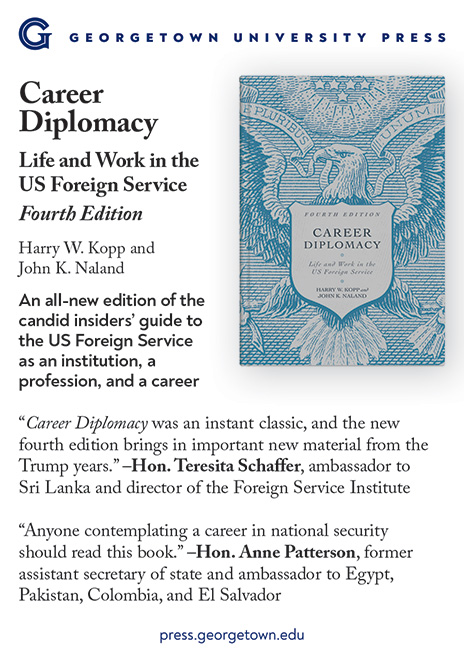