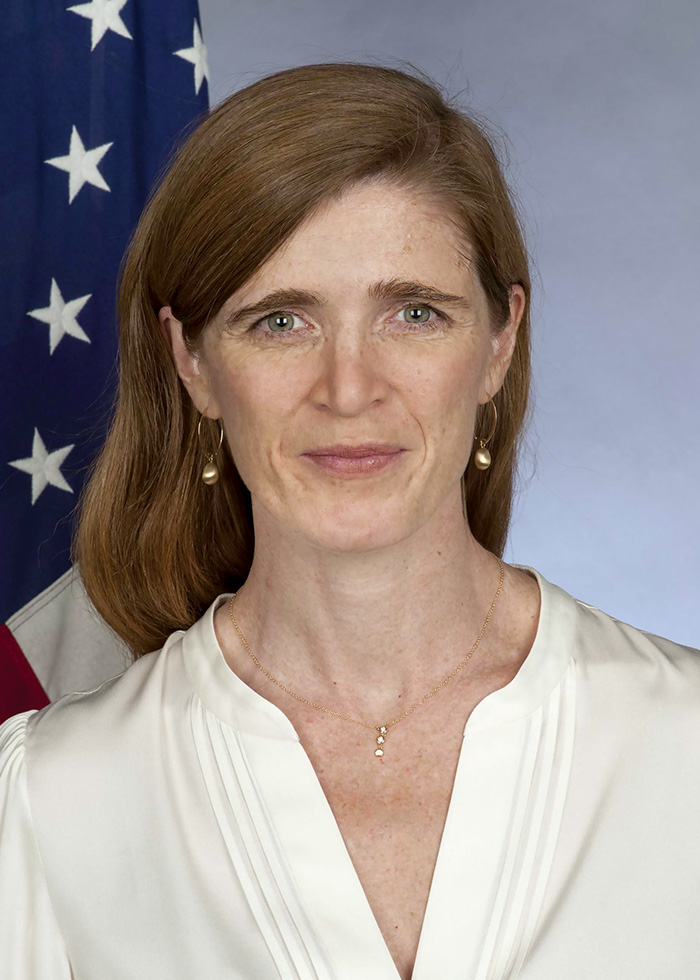 Samantha Power was sworn into office as the 19th Administrator of the U.S. Agency for International Development on May 3. She leads USAID as it reaches the 60th anniversary of its founding this month. Priorities today for Administrator Power and the agency include enhancing USAID’s long-standing leadership in areas including food security, education, women’s empowerment and global health.

Power is the first USAID Administrator to also be a member of the National Security Council, where she aims to ensure that development plays a critical role in America’s responses to a range of economic, humanitarian and geopolitical issues.

Prior to joining the Biden-Harris administration, Samantha Power was the Anna Lindh Professor of the Practice of Global Leadership and Public Policy at Harvard Kennedy School and the William D. Zabel Professor of Practice in Human Rights at Harvard Law School. From 2013 to 2017, Power served in the Obama-Biden administration as the 28th U.S. Permanent Representative to the United Nations. During her time at the U.N., Power rallied countries to combat the Ebola epidemic in West Africa and to ratify the Paris climate agreement.

From 2009 to 2013, Power served on the National Security Council staff as special assistant to the president and senior director for multilateral affairs and human rights. At the NSC, she advised the Obama-Biden administration on issues such as democracy promotion, United Nations reform, LGBTQ+ and women’s rights, atrocity prevention, and the combat against human trafficking and global corruption.

An immigrant from Ireland, Power began her career as a war correspondent in Bosnia, and went on to report from places such as Kosovo, Rwanda, Sudan and Zimbabwe. She was the founding executive director of the Carr Center for Human Rights Policy at the Harvard Kennedy School, and has been recognized as one of Time magazine’s “100 Most Influential People” and one of Foreign Policy’s “Top 100 Global Thinkers.” Power is author and editor of multiple books, and the recipient of the 2003 Pulitzer Prize for Nonfiction. She earned a B.A. from Yale University and a J.D. from Harvard Law School.

Administrator Power responded to questions from The Foreign Service Journal in mid-September in conjunction with USAID’s 60th anniversary this month.

FSJ: On the occasion of the 60th anniversary of USAID, what should Americans know about the work of USAID and why it matters?
Power: USAID is America’s best-kept secret. This is an agency full of thousands of dedicated, competent experts who take on the toughest challenges in the world—COVID-19, climate change, the latest natural disaster. When you see news of a crisis somewhere in the world—like the recent earthquake in Haiti—it’s USAID who the president sends to help those in need.
This is the agency that has helped beat back Ebola in West Africa, backed democratic transitions or supported elections in almost 90 countries since the end of the Cold War, mobilized companies to invest nearly $200 billion in clean energy in poor countries, opened classroom doors to 40 million students who weren’t getting an education, and turned the tide against HIV/AIDS, malaria and tuberculosis.
Over the past 60 years, we’ve responded to nearly 3,000 disasters covering more than 80 percent of the planet. We’ve reached billions of people with lifesaving food and medicine. And we’ve helped countries transform themselves into prosperous, peaceful economies. We used to give aid to South Korea, Chile, Thailand and Costa Rica. Now, Americans book vacations there. We sell American-made goods and services there. And all of this is because taxpayers spend less than 1 percent of our annual budget on foreign assistance. 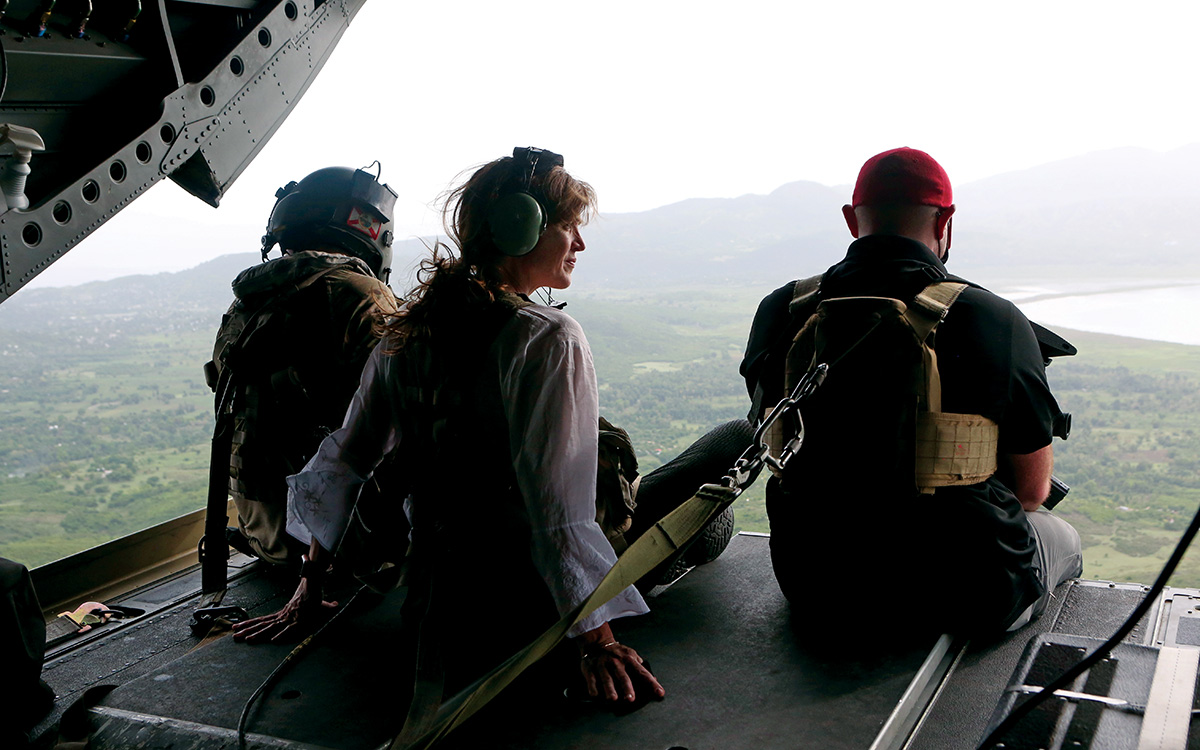 Administrator Power surveys damage in southwestern Haiti after the Aug. 14 earthquake, before touching down to speak with survivors in Maniche.
USAID

FSJ: What are your top three global priorities?
Power: Honestly, given the life-and-death challenges before us, you might say that the priorities are choosing us. COVID-19 has killed more than 4.5 million people, sickened tens of millions more and battered economies around the globe, driving nearly 100 million people into extreme poverty—the first rise in 20 years. I liken it to a meteorite hitting the planet; it’s made every development problem we face harder. So ending the pandemic by vaccinating the world, caring for the sick and strengthening health systems to prevent the next pandemic is absolutely crucial.
At the same time, climate change is wreaking unprecedented havoc. Hurricanes swing from New Orleans to New York, wildfires darken the sun on nearly every continent, floods turn our streets to rivers, and droughts turn our soil into sand. We have to help countries grow their economies without growing their carbon emissions, and we have to build resilient infrastructure and agriculture, so they have the ability to weather the worst effects of climate change.
Finally, after a post–Cold War explosion of freedom and self-government, the world is getting less free. Indeed, we have seen a 15-year decline in democracy. Authoritarians are growing bolder, using new technologies to suppress their own people at home and spread misinformation abroad. We must counter these malign actions; shine a spotlight on corrupt practices so people know how their governments really function; and, above all, come together to show democracies can deliver for their people.

FSJ: What are your plans to strengthen and institutionalize the career Foreign Service at USAID and rationalize approaches to Foreign Service “talent management”?
Power: I shared some of our global priorities. Strengthening a long-depleted workforce, including our Foreign Service, is one of my top agency priorities.
For too long, we’ve asked too much from too few. Our Foreign Service officers work in some of the most difficult places in the world, often at great risk and at great distance from their homes and loved ones. They are beyond committed; but commitment can only get you so far. Over the next three years, I’m seeking to significantly increase our Foreign Service staff so we can meet the complex challenges we face.
We’re also working to create a new humanitarian assistance position with career paths for Foreign Service officers in humanitarian programs—a growing need. Twenty years ago, there were 16 complex emergencies a year, on average. Today there are 44, and crisis, conflict and pandemic response make up half of our programming.
But we can’t staff up without staffing equitably. For too long, this agency has not been intentional about recruiting and in retaining a workforce that looks like America. Like so many institutions, public and private, we often self-select from the same traditional talent pools, without building pathways for diverse candidates to apply. Thankfully, that is beginning to change.
In September, we hosted our first-ever historically Black colleges and universities [HBCU] development conference with more than a thousand participants. We expanded our paid internship program, because we know that unpaid internships can actually be a barrier to entry for candidates from marginalized communities, not a stepping-stone. And in partnership with Howard University, we plan to double the number of Donald M. Payne Fellowships, which help fellows pay for two years of graduate school before receiving Foreign Service appointments at USAID. Our most recent class of Foreign Service officers is our most diverse class, and I hope that is a record we break year after year. 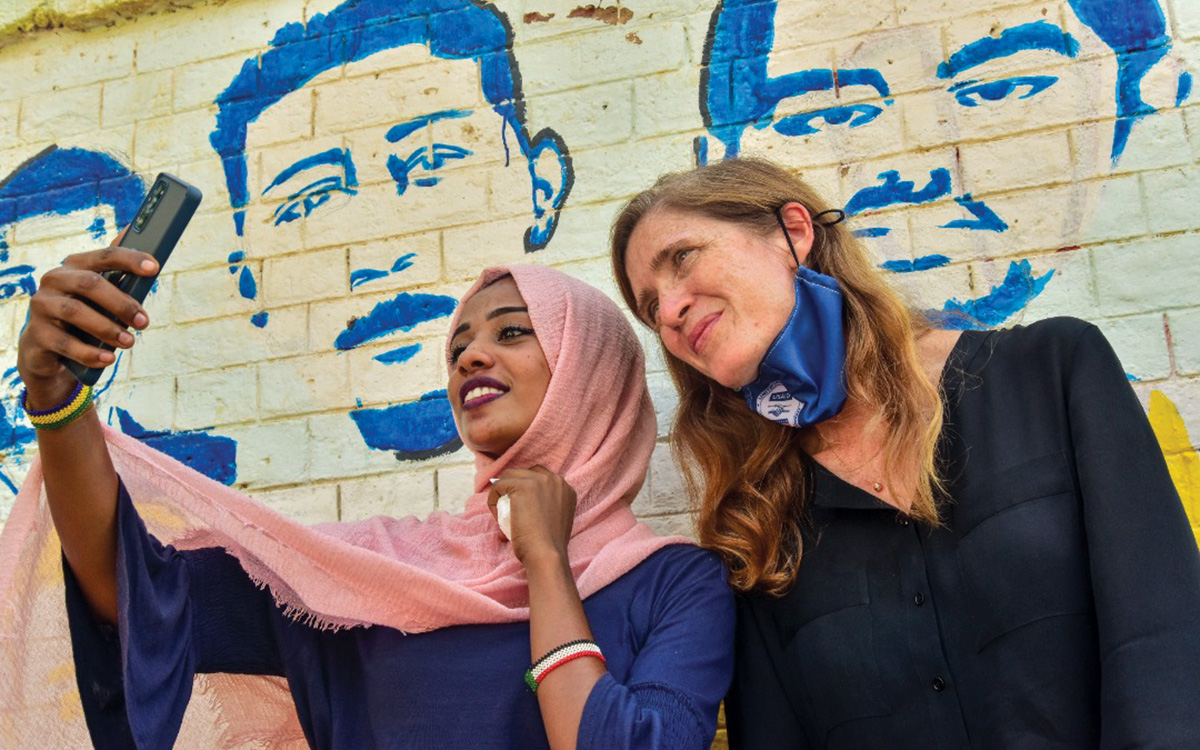 Administrator Power with Rifqa Abdelrahman, the young activist from Sudan known as the “tear gas hunter” for her courage in throwing back tear gas canisters fired by the military during the popular revolution in 2019. Administrator Power visited Sudan in August to support the civilian-led transition before the recent military takeover.
USAID

FSJ: What are the main challenges in development work today?
Power: In a world rocked by a pandemic and dozens of complex emergencies, the needs outweigh the resources available. When USAID was founded, development assistance represented 80 percent of the capital flows going to developing countries; today it’s 10 percent, with 90 percent coming from the private sector. We are no longer the only game in town. So, we need to leverage that other 90 percent so it’s helping achieve development objectives and helping people prosper.
But securing private-sector investment runs headlong into another challenge: Even though capital seeks a higher return, it tends to stay away from corruption, bad policies or instability. When governments are accountable to their people and embrace the rule of law, however, investment tends to follow. So we need to address governance issues and fight corruption, even as we focus on traditional development investments in, for example, food security and global health.
It’s not an original analogy, but I do really believe development depends on three legs of a stool: security, without which a state cannot function or develop; economic growth, fueled by the private sector, which expands opportunity and boosts livelihoods; and democratic, accountable governance, which underpins them all. It attracts greater private-sector investment, solidifies security and regional stability, and fundamentally reflects the desires and the dignity of a country’s people. 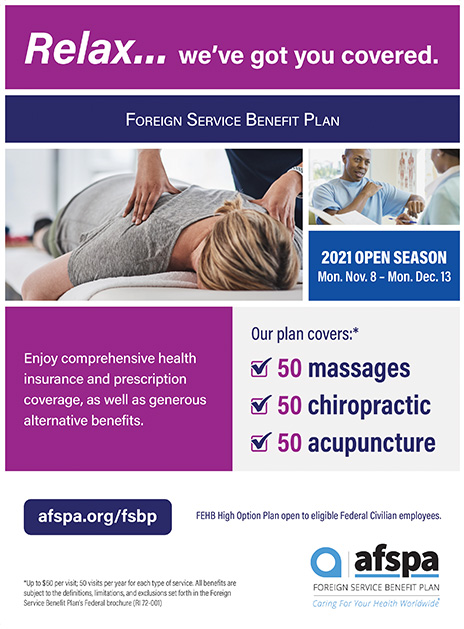 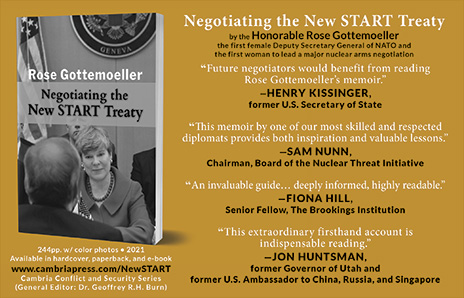