The January/February issue focuses on U.S. Diplomacy for the 2020s. 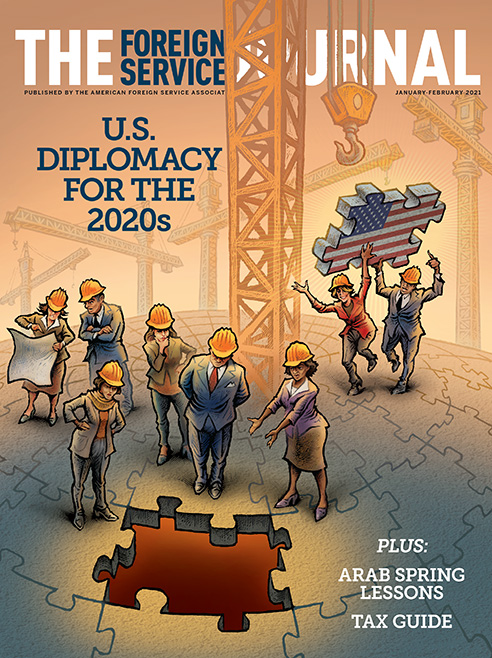 The Future of the Foreign Service

Diversity and Inclusion in the U.S. Foreign Service—Recommendations for Action

The Association of Black American Ambassadors offers a set of measures to make diversity and inclusion real at State and USAID.

Getting State Back into Nuclear Arms Control and Nonproliferation

Nuclear arms control and nonproliferation remain critical national security challenges. How prepared is the State Department to deal with these issues?

What the Tunisian Revolution Taught Me

Reflections on the 10th anniversary of the Arab Spring from a career diplomat who was there.

On the 40th anniversary of the release of the Iran hostages, a fictional FSO heroine stirs memories of the takeover of the U.S. embassy in Tehran and its aftermath.

BY JOHN LIMBERT AND MARC GROSSMAN

A Moment of Hope and Possibility

Picking Up the Pieces

A Crown and a Nation

The New Year: An Opportunity to Think Differently

Advocacy in a New Administration