The Making of a Real American Diplomat

A member of the Senior Foreign Service who immigrated to the United States as a child reflects on her journey.

“I want to talk to a real American.” Here we go again, I thought. I firmly repeated why the visa applicant was ineligible to visit the United States and that I really was a real American.

Such interactions must have happened hundreds of times during my first tour in Guangzhou. It’s something I’ve often been asked and I've asked of myself: Am I a real American? Am I a real American diplomat? Many colleagues have shared similar stories about being asked that question and then fumbling over how to respond.

Of course, in addition to being asked whether I am a “real American,” I often get the other popular question, “Where are you really from?” For many years, when my answer of California did not seem to suffice, I would go into my family history. I was annoyed by this interrogation, as I couldn’t imagine my white colleagues having to explain that they or their ancestors were really from Ireland or England.

So I would explain “where I was from” to colleagues, to foreign counterparts, to the guy at the grocery store and on customs forms: I was born in Seoul, Korea. 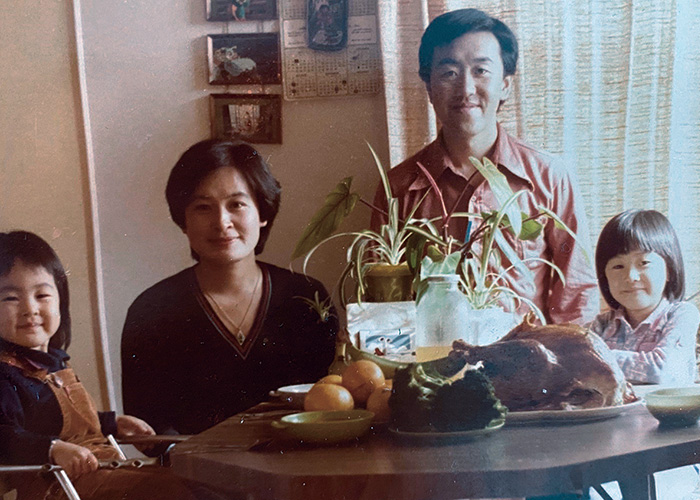 The Chung family, including Julie (at right), celebrate their first Thanksgiving meal in the United States.
Courtesy of Julie Chung

I recall tears falling like pattering raindrops on my leather jacket as I boarded an airplane for the first time at the age of 5; I was immigrating with my parents and sister to the United States. I really did not understand why I was leaving my friends and home, and my ears popped endlessly on the flight until I got a handful of brightly colored candy to suck on.

My dad landed a $4.25 hourly wage job on the drafting floor of an engineering company, and my mom worked the night shift as a dishwasher at an Italian restaurant. Twenty-two years later, my dad had climbed the ranks to become the CEO and president of that company, designing a heating system to prevent O-rings from freezing on space shuttles, which had been the cause of the Challenger tragedy. His invention allowed NASA to restart manned space missions, and he went on to develop the nerve system for the robotic arm of the Mars Rover. My mom became a senior librarian, community volunteer and active church deacon. Does this make us real Americans?

For our first Thanksgiving in America, my mom had done her research and cooked a beautiful turkey. The photo of us at the table prominently features the turkey alongside a plate of unpeeled oranges and broccoli, as we had not yet learned about all the other traditional holiday accoutrements that went with the feast. But by God, that was a beautiful turkey and my mom was so proud. We thought we could be real Americans, and this was the American dream.

School presented a different story. As a young kid trying to learn English, I remember taking a public bus to school where I was bullied and tripped on the playground. My first-grade teacher lent me extra books from the library to quickly expand my vocabulary. Classmates would taunt me by stretching the ends of their eyes into slits and yelling, “Chun King Chicken! Chun King Chicken! Kung fu chicken!” Chun King Chicken was a popular Chinese canned food at the time. Boy I hated that brand, and hoped never to eat that horrendous food from a can.

And I never felt more un-American than the times when someone yelled, “Go back to China!” Sometimes it came from an angry kid, other times an adult speeding by our car flipping the bird because we were driving too slowly. I would slouch down in my seat and think, But we’re not from China! I’ve continued to hear that taunt well through my adulthood.

In sixth grade, I thought the best way to be American was to run for student council president on an earnest campaign to bring fairness in the grading system and more after-school activities. My opponent promised chocolate milk in all the water fountains and won by a landslide, although he never did deliver on that promise. I gave the commencement speech at my middle school graduation, speaking of the American dream and conveying my parents’ endless optimism in the opportunities that the United States could give us.

I gave the commencement speech at my middle school graduation, speaking of the American dream and conveying my parents’ endless optimism in the opportunities that the United States could give us.

When I joined the Foreign Service with the very first cohort of the Pickering Fellowship (originally called the Woodrow Wilson Foreign Affairs Fellowship), my parents were immensely proud. During my internship abroad at the U.S. embassy in Bonn, I had a kind supervisor who was the economic counselor, but I never once met the ambassador (Richard Holbrooke) or deputy chief of mission (no idea who that was) all summer.

One day I had forgotten my badge. Trying to enter the housing compound, I was told that Filipino maids went around the back. And in one encounter that particularly shook me, a white male officer told me: “It’s because of people like you that I can’t get promoted.” He dressed up as Uncle Sam during the embassy’s Fourth of July picnic, so I felt that, essentially, Uncle Sam had just told me I did not belong, and I wondered if what he said were true. I did not want to rock the boat, and I certainly wanted to be a “real American.” So I decided I needed to work twice as hard as others to prove myself.

During my work on the Korea Desk, I took several trips to the DPRK where North Korean officials eyed me from across the table and asked me, in Korean, if I were really an American. I wondered if they knew that my grandfather was separated from his wife and three children during the mayhem of the Korean War and was never to be seen again after the DMZ border closed. And as the granddaughter of that man, I was now an American diplomat representing the “imperialist enemy” they had been riled up about for decades. Over bad Korean soju liquor and karaoke singing, the North Korean officials would vent about how they felt about “those Americans.”

For years, I hid the fact that I was a Pickering Fellow and did not list it on my résumé to avoid being prejudged about how I entered the Foreign Service. Sometimes there was office chatter about how “those fellows” were exploiting the system, and I would not offer up that I was one of them. It wasn’t until I was promoted to Minister Counselor that I had the confidence to talk about the fellowship more openly and explain how we had to surpass higher requirements than normal Foreign Service applicants.

There were times in my career when I really didn’t think I belonged. Just a few years ago, a senior government official addressed me as a “little lady” and asked whether I was “taking good care of my ambassador,” even though I was there in my own right as a senior officer at a Cabinet meeting. I wondered if he would have addressed a tall white male of my same rank in that way.

Throughout my career, I found myself subconsciously counting the number of women and minorities in every meeting I attended. I have no idea why I did this—it just came naturally. But it also chipped away at my confidence as I questioned how I could belong if there were not many other people who looked like me.

Many years ago, on my arrival at post a peer at the same grade insisted I was “junior” to him and took over the juicy and supervisory portions of my portfolio, de facto taking over my position in an office where I was the only person of color. My supervisor shrugged it off, and I was afraid to raise my concerns with anyone higher up. Human Resources told me it would be useless to grieve and that it would ruin my corridor reputation. Again, I didn’t want to rock the boat. I decided to swallow the disappointment and chalk it up to a learning experience of what not to do in the Foreign Service. 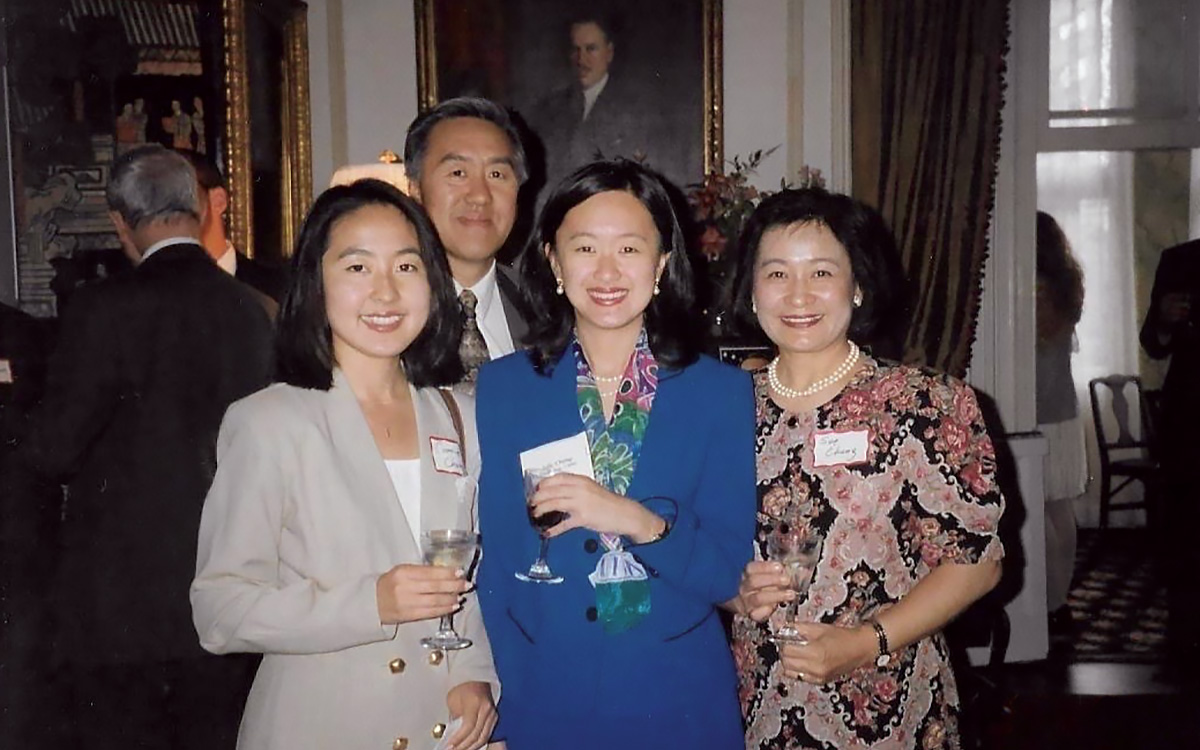 The author, second from right, at her swearing-in as a U.S. Foreign Service officer in 1996 at the State Department, with proud parents and sister, Connie Kim.
Courtesy of Julie Chung

Now, as we hear stories about bullying and microaggressions, and fears of retaliation that prevent officers from speaking up, I admit I wish I had done more to stand up for myself, and I want to do more to help change our culture and create safe spaces to speak up. We all have a role to play in this. I’ve been lucky to meet wonderful mentors, one of whom told me: “You came to play in the game, not sit on the bench.” I took those words to heart in later assignments and was encouraged by my parents, who told me never to view myself as a victim.

Two things that have helped me stay resilient: First, my Christian faith, the prism through which I live and work. The values of my work are firmly rooted in the values of my faith and family, and despair is not an option. Second, my love of this institution. Despite all our imperfections and mistakes and missteps, the institution of diplomacy and our State Department have endured because of our capacity to be faithful to our oath and reaffirm our sense of purpose to serve our country. I remind myself of that every day, especially on the challenging ones.

Whenever I’m asked now where I’m really from, or if I’m a real American, I no longer get offended. I relish telling my immigrant story, both to foreigners and Americans. My story, and all the stories of my colleagues, make up the diverse fabric of this institution. That diversity doesn’t just make us feel good, or ensure we reflect a “real” America; it also helps us solve problems and negotiate better, and bring different ideas to the table because of our varied experiences.

While a public diplomacy officer in Vietnam, I often relayed my immigrant story to young Vietnamese audiences. They related to themes of working hard, persevering, starting from scratch—my story, and many stories like mine, are what constitute America. So am I a real American, they would ask? You bet I am, I’d say. I’m a real American diplomat. 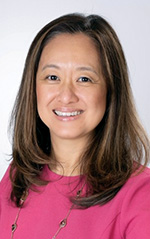 Julie Chung currently serves as principal deputy assistant secretary in the Bureau of Western Hemisphere Affairs. She was previously the director for the Japan Desk and acting deputy assistant secretary for the Bureau of East Asian and Pacific Affairs. A career member of the Senior Foreign Service, with the rank of Minister Counselor, she has served as deputy chief of mission in Cambodia and economic counselor in Thailand. Other overseas assignments include Baghdad, Bogotá, Guangzhou, Tokyo and Hanoi. While working in the Office of Korean Affairs in Washington, D.C., she frequently traveled to North Korea to implement the U.S.–North Korea Agreed Framework. From Huntington Beach, California, she joined the Foreign Service in 1996 in the first cohort of the Thomas R. Pickering Fellowship program.