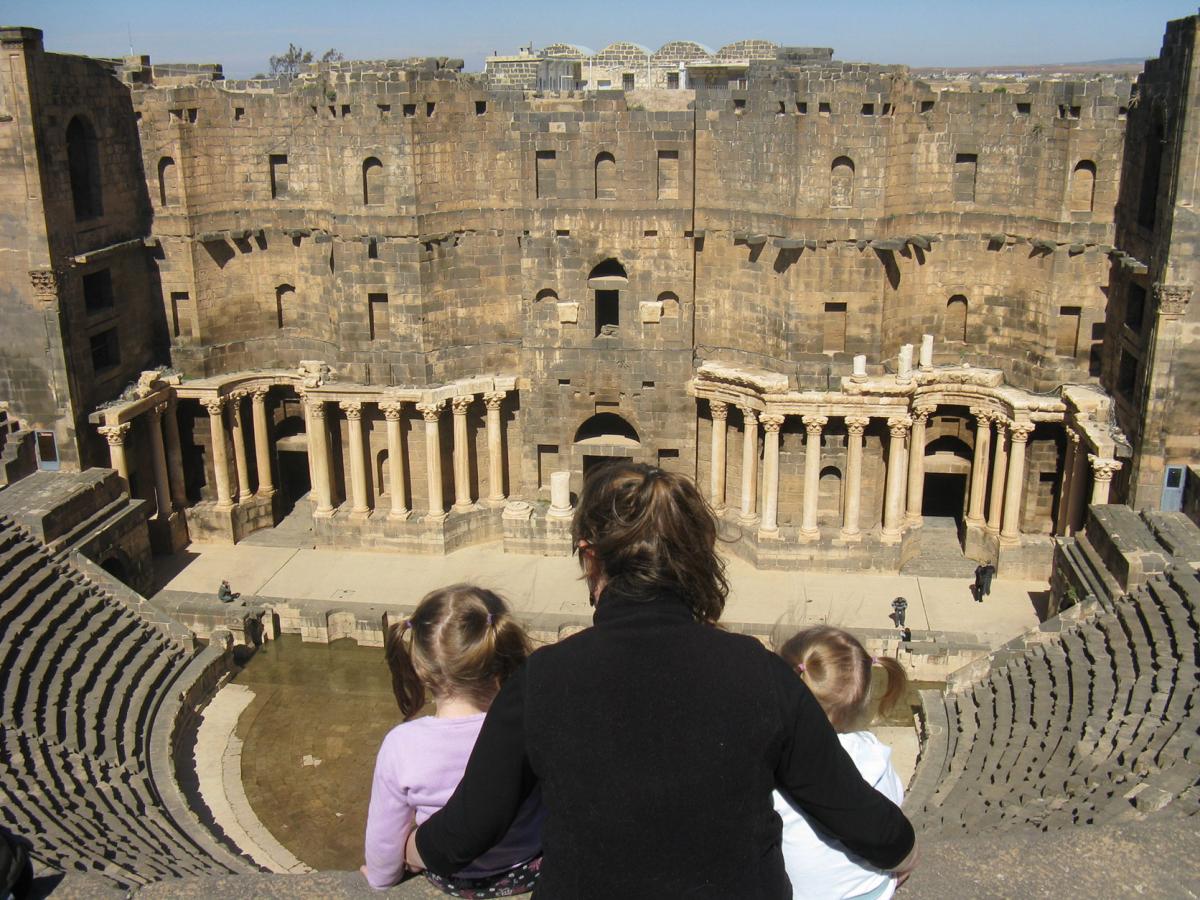 Laura Fabrycky and her daughters look down at the stage from high up in the amphitheater at Bosra.
David Fabrycky

We had no idea then just how slender a needle’s eye we were threading when we set off as a family to explore Syria over a long (American) Presidents Day weekend in 2011. Traveling with our 4- and 2-year-old daughters, we planned an ambitious itinerary, secured visas and headed north from our apartment on the western edge of Amman, to the border crossing at Daraa.

The Arab Spring was still in its heady early days. Egypt’s youth had electrified the region a month earlier by toppling a dictator. We wondered if Syria, too, would soon taste freedom, but couldn’t have anticipated just how hard and with what hell-fury the window that had been cracked open would be slammed down upon a people and a place.

Our happy memories of this trip now seem strange and incongruous alongside accounts of the civil uprisings and the regime’s brutal retaliation in places like Daraa, Damascus and Bosra—not to mention the growth of ISIS and ensuing brutality throughout major parts of the country.

As we drove up to the border, we read Little House in the Big Woods aloud in the car, eating Goldfish crackers. On the Syrian side of the border, we piled out of the car for passport control. The guards laboriously scrutinized our passports for signs of travel missteps into enemy territory, a familiar, delicate dance of Levantine travel.

Eventually, after much waiting, the kids and I returned to the car. Yet the scrutiny dragged on. My husband, David, attempted to speed up the process with polite chitchat while I continued to read Little House aloud in the parked car.

The Goldfish bag was now empty. Frustrated but not quite defeated, David returned to the car. “I need Hannah” (our youngest). Ten minutes later, he emerged from the building beaming, with passports in hand and Hannah in his arms.

Apparently, seeing her energetic blonde pigtails and enormous brown eyes once more helped the guards regain their perspective, and they gave up looking for signs of enmity. We drove off.

Five years on, our memories are in a kind of interpretive ruin, and we have no place to fix them.

Listening to a Dora the Explorer “World Friendship” CD, we made our way through Daraa—where, in a few weeks’ time, children who had scribbled anti-regime graffiti on a wall would be dragged away to torture chambers.

Children’s songs from France, Russia, Australia and China blared from the car. Just outside of Daraa, Hannah said she had to go to the bathroom, so we pulled over. I hopped out of the car, but just as I lifted the hatchback to retrieve the plastic potty, Dora’s unmistakable voice belted out: “Shalom! From Israel!” Hardly the tones of a delicate dance. We jumped back in the car and zoomed off.

We ventured on to the still-inhabited Roman ruins at Bosra—taking in its basalt amphitheatre, climbing up to a perch to gaze down on the stage, where in March 2015 rebel forces would battle with regime troops. Winding through its ancient, cobbled streets, we stopped to let our girls play amidst the grassy, time-softened remains of a basalt Byzantine cathedral. They played “house” and “farm” around the toppled structures.

David and I sat on upturned column segments watching them, happy that we had ventured here and not to a cloistered tourist resort for the holiday. Residents waved and smiled at us. We waved and smiled back.

Later we headed into the mountains north of Damascus, to Ma’loula—one of the few towns where Aramaic (the language of Jesus) is still spoken. We ran inside a smoky, modest café to escape a torrential afternoon rain and had a satisfying meal just below the cliffs where the Orthodox monastery of St. Thecla perches.

After visiting the shrine, we hiked through a famous crack in the rock, bundled against the rainy cold. The apocryphal story tells of a rock that opened to allow an elderly St. Thecla, a contemporary of the Apostle Paul, to flee her persecutors after having faced torture and death sentences many times over in her life. 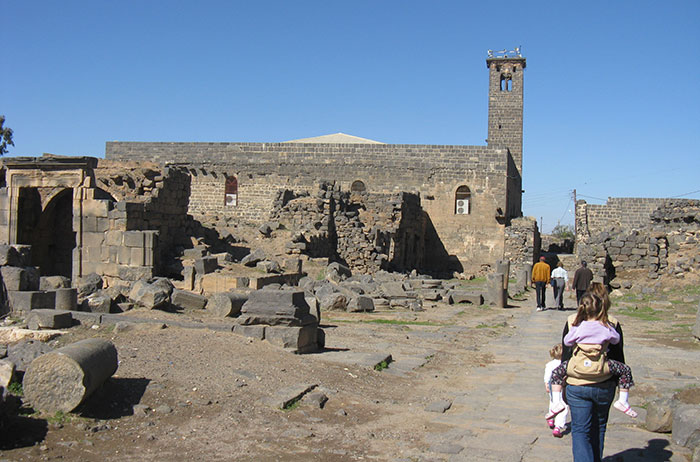 Walking through the basalt ruins in Bosra.
David Fabrycky

Back in Damascus, the sights, smells, tastes and faces of the ancient streets left lasting impressions. We purchased a set of glass-paneled copper lanterns from a shopkeeper who, in his doting, fatherly way, gave our daughters little fabric-framed mirrors for their purses. Mash’allah! Mash’allah!

He had the lanterns wound tightly in bubble-wrap for our trip back to Amman, assuring us that if any of the panels broke, he would be honored to repair them. Just come back, no problem.

The lanterns have by now even survived a transoceanic voyage. But five years on, our memories are in a kind of interpretive ruin, and we have no place to fix them. It was a good trip. We still say, as we did then, how lovely a place Syria was, even in the shadow of its ruthless dictator and his apparatus of fear.

Yet Bosra’s basalt structures have been pocked by bullets, its mosaics punctured, many of its residences demolished. The destruction of sites like these, there and elsewhere, makes us weep, but that pales before the abject suffering and displacement endured by the Syrian people.

How many times have I thought of Thecla’s rock and said a prayer for miraculous safe passages for the countless refugees who have suffered unrelentingly in the years since?

The diplomatic life comes with enormous privilege—which, at its best, is twined with a responsibility to venture far beyond the safety of Disney-like surreality; to take real and complicated places into one’s own life, as best one can; to meet people, encounter cultures and make memories in places that many will never see.

While some among the American public harbor fear about the unknown and the “other,” we think back to the faces we saw—including little ones with bright pigtails and brown, doe-like eyes, just like our Hannah; eyes that should have been compelling enough for a taste of liberty, for an end to the violence, for a livable, human peace—smiling, waving, as our daughters played farm in the gentle ruins of Bosra. 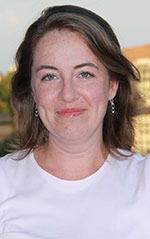 Laura Merzig Fabrycky, whose husband is a State Department FSO, is a freelance writer and editor, poet and essayist. Her writing has been published in Books & Culture, the Review of Faith & International Affairs and elsewhere. Her first collection of poetry, Give Me the Word, was published in 2015. She and her family are currently posted to Berlin. 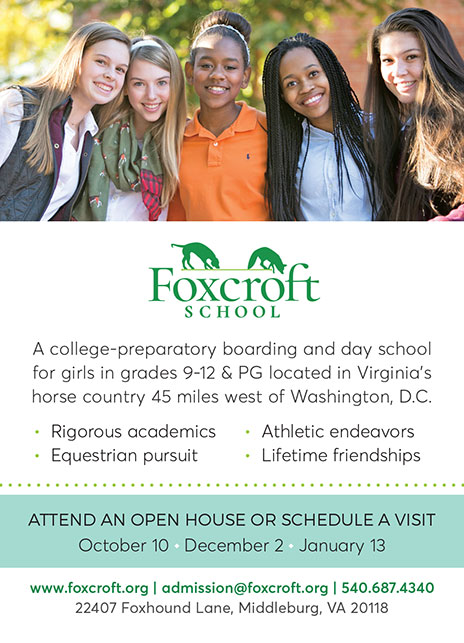